More than ever before, there’s been a lot of love for queer movies in the mainstream this year. Following the success of Moonlight and Call Me By Your Name, LGBTQ representation finally broke out of arthouse cinemas in #20GayTeen thanks to Love, Simon, the first studio movie to star a gay lead. This is a groundbreaking step in the right direction, but love for Simon and his coming out story is only the beginning.

To continue being inclusive in ways that matter, future efforts must broaden their perspectives so that mainstream audiences can learn to empathize with queer people who aren’t just white, able-bodied men. Sure, Simon is loved by fans all over the world right now, but the star of Love, Scott is even more worthy of your adulation because of the real life struggles that he faces in this heartbreaking documentary.

Filmed over the span of three years, Laura Marie Wayne’s debut feature is a deeply personal portrait of her friend Scott Jones, an openly gay musician who was paralyzed from the waist down following a devastating attack that happened in their hometown of Nova Scotia. Audiences soon learn that the assault was never treated as a hate crime by neither the courts nor the media, despite Jones’ protestations to the contrary, and the film then proceeds to explore the various ways that this forever impacted his life. 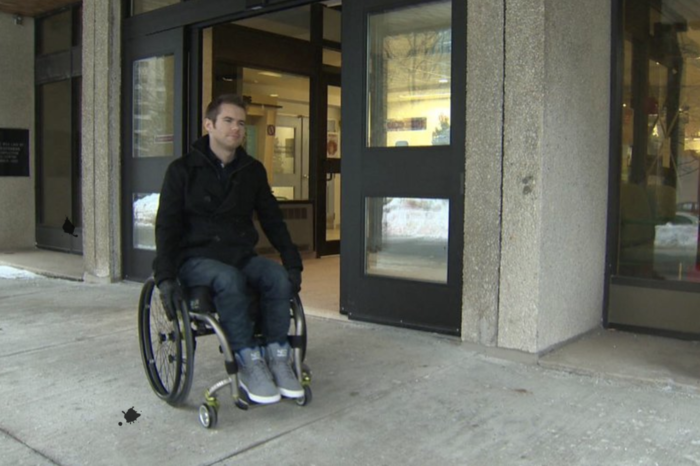 Before we meet Jones though, Wayne introduces her subject via voice over and it’s unclear why she chooses this approach. Yes, the fact that her and Jones are friends in real life opens the film up to a more authentic and sometimes brutal honesty that few other filmmakers could have caught on camera, but the narrative is far more effective when the lens is focused on Jones. Fortunately, the voiceovers and accompanying imagery of water and nature are few and far between. For most of Love, Scott, it’s Jones and his personal account that take centre stage.

Jones possesses a natural charisma on camera that hasn’t been dulled by the trauma that he endured prior to filming. During the long take interviews that characterize the bulk of the film, we as an audience continue to learn more about both the attack itself and what happened next. In one particularly affecting scene, Jones returns to the street where it all happened exactly one year later and recounts painful details that are sometimes hard to hear. In another sequence that takes place towards the end of the film, Jones starts to break down and asks Wayne to cut the end of the interview out entirely. Moments like this serve as a timely reminder that ignorance and discrimination are still present in the lives of far too many queer people even today, but it’s not all doom and gloom.

Even while lying in a hospital bed just days after the attack, Jones tells his loved ones that they shouldn’t be afraid about what happened to him. It’s not long before this sentiment soon gives birth to the “Don’t Be Afraid” movement, which seeks to improve the lives of LGBTQ people living in Nova Scotia. Whether you’re queer, disabled or neither, it’s hard not to feel moved by this and a rousing speech that Jones gives about the campaign on stage, using crutches to help him stand before everyone with pride. Tears will also undoubtedly fall when a friend helps piggyback Jones up to a favorite outdoor location that he thought he would never be able to revisit again. 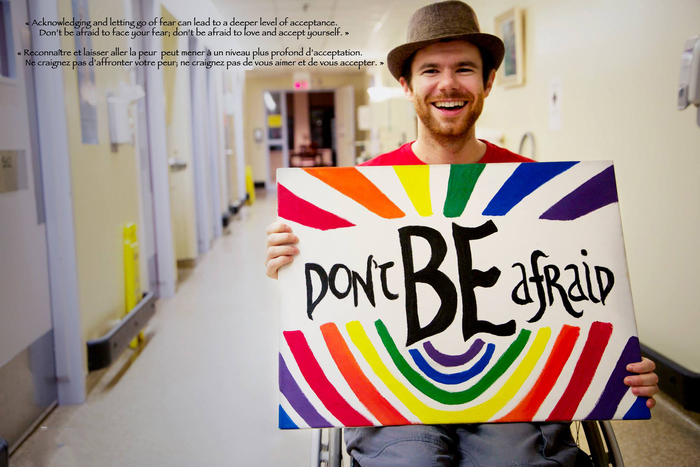 Jones’ strength in the face of hatred is admirable from the get-go, yet it’s the way that he tries to find meaning in what happened which truly inspires. Rather than retreat into himself and his pain, Jones actively seeks catharsis and in one particularly poignant moment, he even reaches out to his attacker in prison, trying to better understand the person who changed his life forever. It’s undeniable that Jones is a beacon of hope and a huge part of that is down to the honesty that his friend captures on film. However, for all of its intimacy, there are also moments in Love, Scott that hint at the underlying trauma which still hurts behind closed doors and this is most noticeable during his occasional talk of dating.

Every now and again, Jones casually mentions guys or the dating app grindr in a rather dismissive way. In these moments, his usual positivity briefly slips, and if you read between the lines, it feels like Jones no longer expects to find love now that he’s a disabled gay man. These brief instances are arguably even more devastating than talk of the attack itself, particularly as Jones seems to have made peace with what happened to him for the most part and remains consistently positive throughout.

One of the reasons why Jones might feel like this is because queer disability is rarely addressed on film, so it’s ironic that his own story will undoubtedly bring hope now to others experiencing something similar. Aside from a few notable exceptions like The Way He Looks and Margarita With a Straw, disabled queer people rarely see their own stories play out on screen, and when they do, it’s even rarer to see them depicted as sexual beings. Representation is vital and without it, it’s easy to see why people like Jones may fear that they could end up alone, even though that couldn’t be further from the truth.

Love, Scott ends by explaining the statistics behind the prosecution of hate crimes in Canada, reminding us that more needs to be done before queer people can finally feel safe on the streets. Sure, the mainstream has started coming to terms with loving queer people like Simon, but we hope that wider audiences will have room in their hearts for the story of a disabled queer man too. Films like Love, Scott are needed not just to counter homophobia, but to empower those who endure the consequences of it firsthand and maybe help change some laws that discriminate against LGBTQ people along the way.