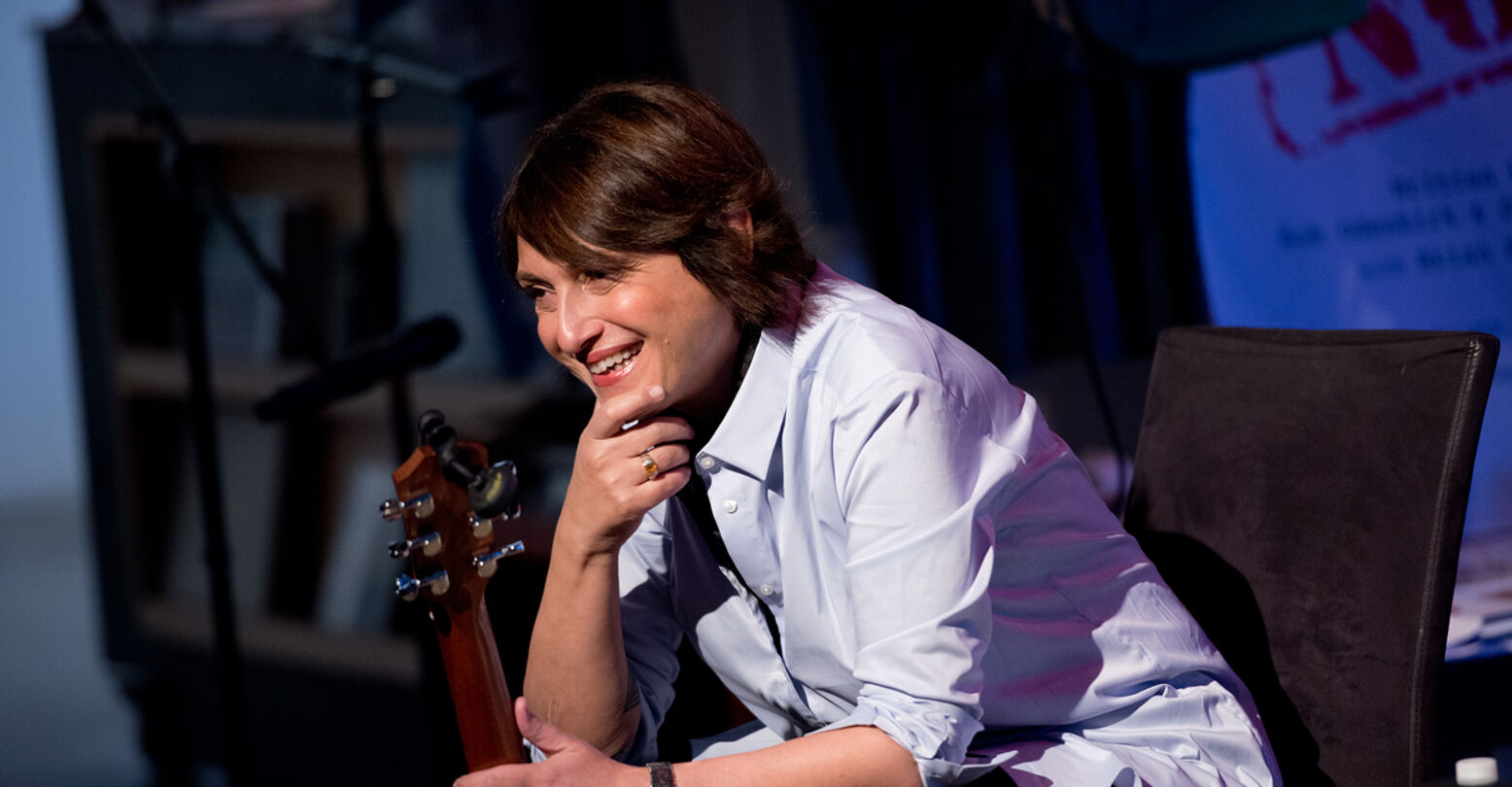 I admit that the first time I heard of Rayya Elias was as Elizabeth Gilbert’s partner.

The long-time friends turned lovers announced the romantic turn in their relationship on Gilbert’s Facebook page, seen by more than 3 million followers. And in all honesty, up until then I hadn’t pay Gilbert herself much attention because, based solely on what I’d gleaned from American housewives and Eat Pray Love, she was a straight white woman who moved on from her divorce with another man.

I know now these assumptions are completely incorrect, and am a huge believer in Big Magic. But knowing she was queer helped usher in that awareness, and then I became a fan of Elias and her work, a gift in itself.

As soon as I was clued into Elias, a Syrian-American lesbian writer, filmmaker, and musician, I wondered how I hadn’t come across her work before. This became even more devastating as Gilbert accompanied her otherwise happy announcement with the fact that Elias was dying.

After more than a year with cancer, Elias passed away this week. Gilbert let the world know in another public post, celebrating the life of someone whose existence and work was never as celebrated as it should be.

Most of the articles about Elias’s untimely death are given headlines that qualify her as Gilbert’s partner, which is truetheir love for one another was enviable.

The only time I ever spoke directly with Elias (whose 2013 memoir Harley Loco: A Memoir of Hard Living, Hair, and Post-Punk, from the Middle East to the Lower East Side detailed her time as an addict, musician, hairdresser and budding lesbian in Syria, Michigan, and eventually her home of New York City), was via email. I wrote her asking if I could include she and Gilbert in a round-up of inspiring same-sex couples for a lesbian magazine. I didn’t expect to hear back from hersometimes serious writers and personalities, despite being openly and proudly queer, still shun LGBTQ mediabut was giddily thrilled whenshe wrote me back, saying she thought it sounded fun.

She went on to say they were “very happily not married,” but had a non-legally binding ceremony of their commitment to one another on June 6.

Before they announced their romantic relationship (after “almost two decades of the deepest foundational friendship you could ever imagine,” Elias had written me, “And a slow burn of passion”), Elias and Gilbert took the stage at the Sydney Opera House for a conversation about living truthfully and feeling unworthy; about triggers and writing through difficult stories and the importance of telling them. They share a common bond of bad assery and not giving fucks and dispensing tidbits on how other women can do the same by delivering it in palatable pieces of wisdom, like Gilbert’s personal friend, Oprah.

“I love Liz’s light and her sensitivity, and her passion for magic,” Elias said in her email.

“I love and revere the way Rayya always manages to tell the truth to people, without hurting them in the process,” Gilbert praised in her partner. “It’s an astonishing talent of the heart. “

Whenever they appeared together, like on stage or when Elias was a guest on Gilbert’s podcast Big Magic, the chemic connection was clear. Not only do they finish each other’s sentences, they build upon them, like an unstoppable force of re-imagination. Despite housewives and other single white women looking to reclaim themselves after reading Eat Pray Love (or even just seeing the Julia Roberts version on the big screen), Gilbert has her own past of rebelry. It was her own personal story of working at Coyote Ugly, published in GQ, that inspired the film, a subtext-heavy cult classic. Anyone who pays attention to Gilbert’s writing, speaking, and storytelling can see that she is more like Elias than she is not, and that together, they were the kind of couple who could change a world that has for too long operated on a patriarchally-projected heteronormative, white-washed “normalcy.”

Two months ago, the couple shared a visual poem they collaborated on, called “Happy Home.” Gilbert penned the lyrics, and Elias sings them, starring in the haunting black-and-white vignette that has her belting at times, and breaking down at others.

The lyrics, in part:

“Our biggest challenge was finally finding our way to each other as lovers,” Elias wrote to me. “Took a long a time. Then [I] was diagnosed with cancer, and that did it. There was no more time to waste. The truth had to be spoken at last.”

She sent me a photo of she and Gilbert, writing “Hope you like this one…” She even made sure to let me know she was the one in black, “Liz is the blonde,” as if I, and the world, weren’t familiar with their fascinating story. The black and white portrait has Elias and Gilbert sitting together on a couch, Elias pressing her lips against her lover’s laughing face. It’s a moment of bliss, captured and shared with us all.

With all of the headlines sharing Elias’s death in reference to her being Gilbert’s lover, her work a side note, I take solace in knowing Gilbert won’t let that be her love’s legacy. And despite Elias’s being a lesser known wealth of wit and strength and assertions that living a creative life is the best way to live, her inspiration will inevitably be a part of what Gilbert continues to bring into the world, and with her own talents, that can only benefit us all. What most people seem to connect with in Gilbert is her ability to take innately personal experiences and speak to their universality with an optimism that makes life, even in its most horrific and punishing moments, more bearable.

“She was my love, my heart, my best friend, my teacher, my rebel, my angel, my protector, my challenger, my partner, my muse, my wizard, my surprise, my gift, my comet, my liberator, my rock star, my completely impossible non-cooperator, my otherworldly visitor, my spiritual portal, and my baby,” Gilbert wrote in Elias’s death announcement. “I loved you so much, Rayya. Thank you for letting me walk with you right to the edge of the river. It has been the greatest honor of my life. I would tell you to rest in peace, but I know that you always found peace boring. May you rest in excitement. I will always love you.” 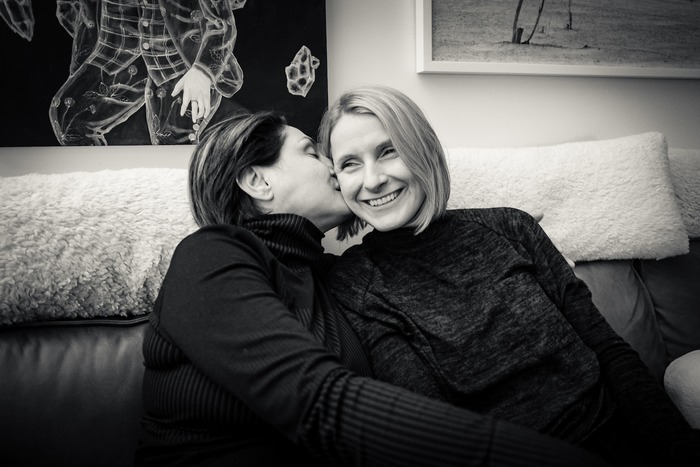 That kind of love, one between two incredible, passionate, and prolific women, will reverberate upon and bless us all.

Photo by Simon A. MacArthur, courtesy of Rayya Elias