After pushing the limits of heterosexual love in The Lobster and parental love in The Killing of a Sacred Deer, director Yorgos Lanthimos is back with a new movie called The Favourite that explores a devastating and yet arguably problematic lesbian love triangle in the royal court of 18th century England.

The Favourite opens with the removal of Queen Anne’s crown and robe, immediately diving into the story behind the throne. It’s not long until Olivia Colman’s monarch then reveals the hidden passage that connects her royal bedroom to the quarters of Lady Marlborough (Rachel Weisz), a secret lover who also acts as the Queen’s confidante and advisor. 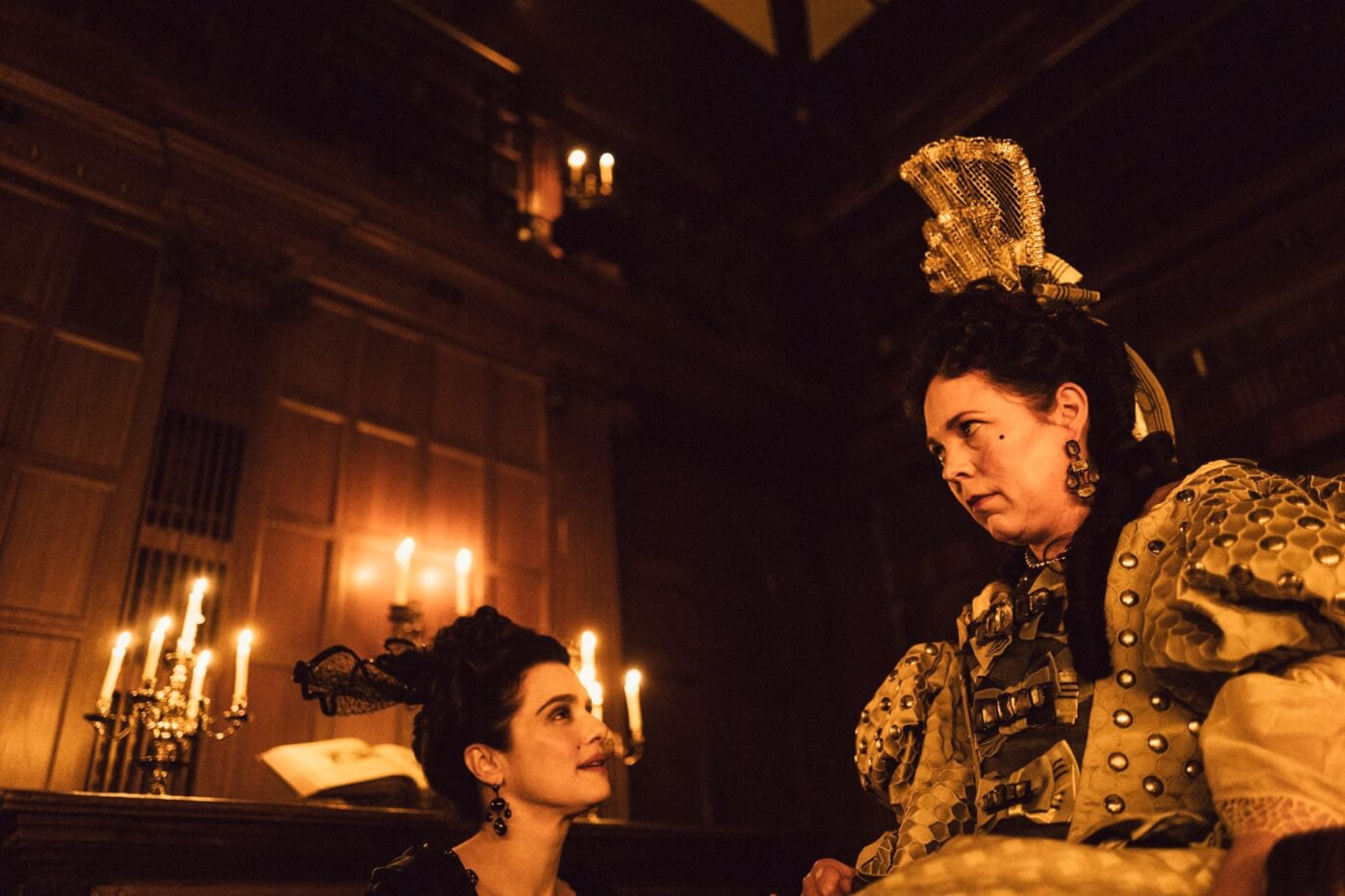 Although they live a decadent and luxurious life together, the pair’s own love story sadly doesn’t shine as bright as the jewels that adorn them. It’s clear that the couple has been together for a long time, but early scenes also reveal that Marlborough is the real power behind the crown, manipulating the Queen who has come to rely on her lover for both emotional and political support.

Things soon change though when Marlborough’s younger cousin arrives. After accidentally discovering that the Duchess has been playing around in the royal garden, Abigail (Emma Stone) sets out to become the new favourite in a bid to reclaim her standing in society.

Star Rachel Weisz once compared the ensuing rivalry to the classic Hollywood movie, All About Eve, but here, the fierce competition that plays out in this festival favourite escalates to more violent extremes that fail to paint anyone in a positive light.

To win the Queen’s loyalty, Stone’s character does everything that she can to replace Marlborough, even drugging her at one point, but the affection that she seemingly feels for her highness isn’t exactly genuine. In fact, Abigail manipulates both Queen Anne and a courtier called Samuel Masham (Joe Alwyn) to find favor in high society, seducing them to increase her standing.

In one particularly memorable scene, Marlborough enters the royal bedroom via her secret passage only to discover that Abigail is sleeping naked beside the Queen after a soothing massage turned into something far more sapphic. Weisz’s character seems genuinely upset by this revelation, even staggering against the wall at one point, but is her love for Anne any more real than Abigail’s or is she simply upset that she’s no longer the titular “favourite”?

Early on, Marlborough helps Abigail out, explaining that “I have a thing for the weak,” but this surely accounts for her affinity with the Queen as well. Throughout The Favourite, the Duchess bosses her highness around, whispering political goals in her ear and even comparing her makeup to a “badger” at one point.

However, there’s also a tenderness between them that cannot be dismissed. Sure, the Duchess is extremely manipulative and there’s a chance that her heart actually belongs to another, but Marlborough’s jealousy of Abigail is rooted in far more than just a desire for power. The Duchess also helps look after the Queen’s physical needs in rare displays of kindness, lovingly tying up her leg brace or distracting Anne from the pain that often befalls her. At one point, Marlborough actually admits to Abigail that “The Queen is an extraordinary person… Even if it’s not readily apparent.” 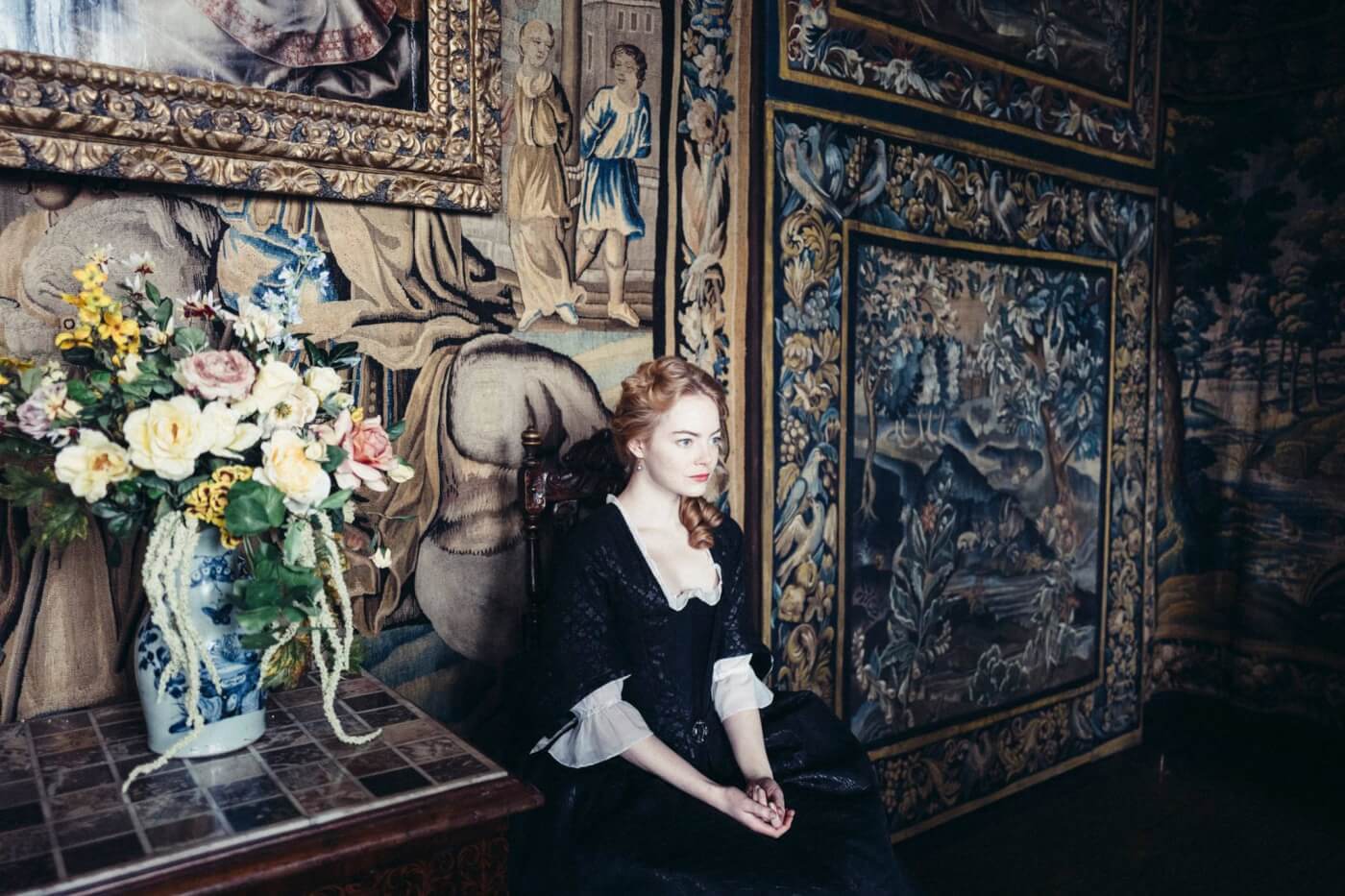 Towards the end of The Favourite, this dynamic dramatically changes, but Queen Anne isn’t entirely innocent in all of this either. Often unhinged and deeply insecure, Colman’s monarch takes delight in the bitter rivalry that plays out for her affections, deliberately making Marlborough jealous of Abigail by telling her that “I like it when she puts her tongue inside me.” Although these sexual moments are rarely depicted onscreen, Stone’s clearly character brings a whole new meaning to the job title, Maid of Bed Chamber.

On the one hand, it’s remarkable to see a queer love story of this magnitude play out on the big screen. Lanthimos has been an arthouse darling for some years now, but if early reactions to the film’s premiere at Venice are anything to go by, then it seems like The Favourite could be a genuine contender during awards season, too.

If that’s true, then The Favourite will be the biggest release since Carol that deals with the love shared between queer women, but is this the kind of representation that the LGBTQ community needs right now? Whether they’re homosexual, bisexual or something else entirely, both Abigail and Malborough are manipulative adulterers and the Queen herself is deranged throughout, possibly driven to madness by the tragic loss of 17 heirs in childbirth.

However, 18th century England is a far cry from the more tolerant world that we live in today. In centuries past, anyone who wanted to act on feelings that deviate from a heterosexual way of life would have been forced to do so in secret, even if they’re the Queen of England. Because of this, it’s hard to condemn each of the women caught up in this love triangle for their unsavory actions.

Sure, The Favourite might not represent the LGBTQ community favorably in a conventional sense, but by exploring the role that queerness has played throughout history, Lanthimos has shone a light on the struggles that LGBTQ women faced before the civil rights of any women were fought for and he’s done so with his characteristic wit and skill.

Before everything crashes down around her, Malborough rather smugly proclaims that “Sometimes a lady likes to have some fun.” By the end of The Favourite, no one in this royal love triangle is having fun anymore except for the audience who will fall in love with this debaucherous and royally amusing journey into queer history.

The Favourite will have its world premiere at the 75th Venice International Film Festival on August 30 and hit U.S. theaters in November.