In 2018, I discovered that I’m extremely single-minded. I only have one interest, and that’s Lesbian Outfits.

When I was young, I had hobbies—like soccer, or playing the guitar, or having cyber-sex with strangers in AOL chatrooms. But no one, not even me, could’ve portended the person I’d become in my late twenties—a super-lesbian with tunnel vision on actresses over 30 wearing tailored suits. #20GayTeen did a number on me, as I somehow emerged gayer than I was last December, and that’s all thanks to the trenches of lesbian Twitter, which is sort of like Santa’s workshop, except trade the elves for a bunch of queer women hunched over their devices, furiously posting stolen paparazzi photos of Cate Blanchett.

I’ve witnessed some incredible ‘fits this year, many of which I’ve written about in pedantic detail. So, to honor the gayest year in modern history, I’d like to recount my favorite Lesbian Outfits of 2018. 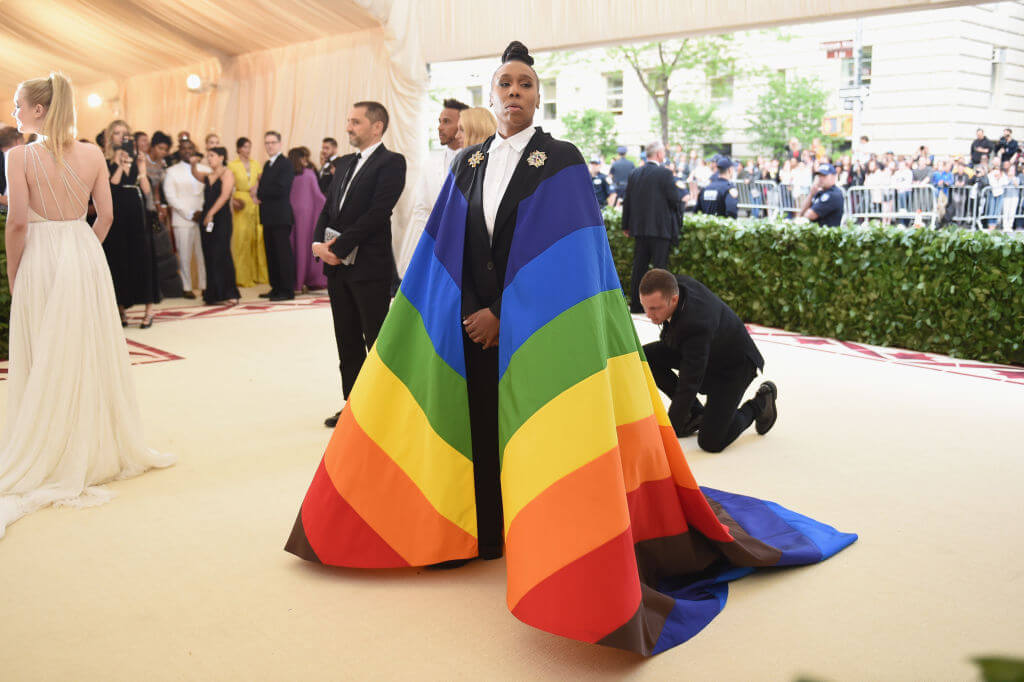 Lena Waithe showed up to the Met Gala guns-a-blazin’ this year, sporting a dapper tux draped with a rainbow flag cape. She marched right into Anna Wintour’s lair and said, “Your bob is homophobic.” Every innocent heterosexual pedestrian had to shield their eyes from the glare of her lesbian pride. Somewhere in a dark cave under Los Angeles, Mel Gibson choked on his spam sandwich. A cab blasting Creed drove by and exploded, colliding with Lena’s homophobia force field. Rihanna walked by and said “Sorry,” and meant it. 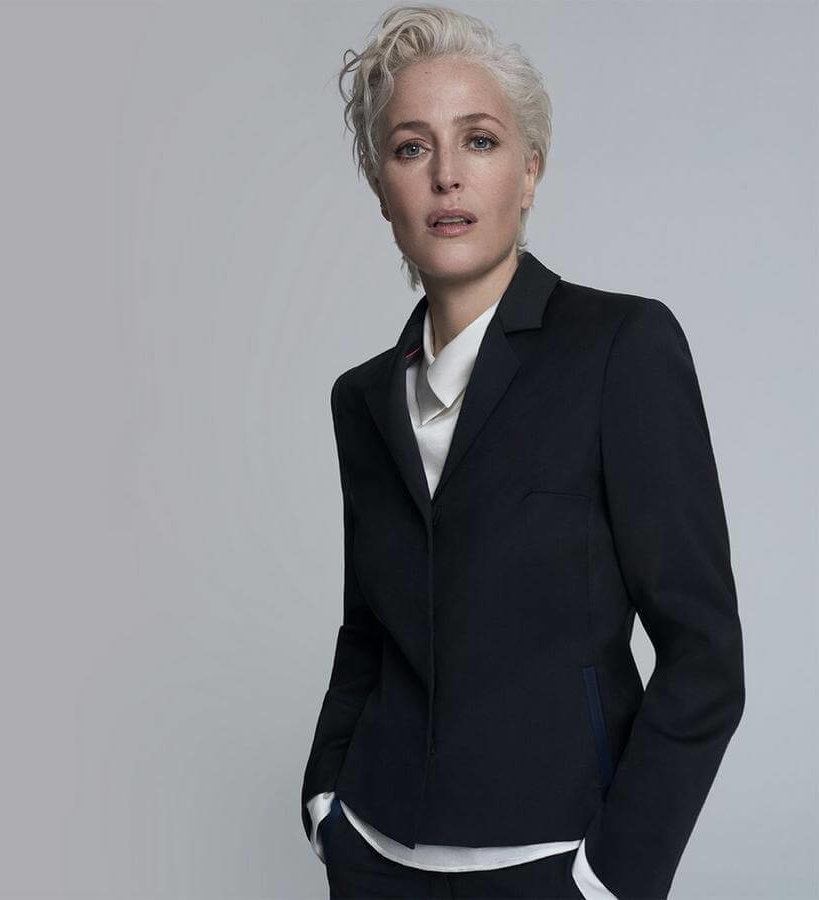 It’s hard to pick just one fave from Gillian Anderson’s new fashion line, which I wrote about in August. It includes: The Dapper Death Eater Trench-Cloak, The Bitchy Fictional Magazine Editor Wool Coat, The White Silk Blouse with a Mysterious Drop of Blood on It, and The “Why The Fuck Do You Think You Have Permission to Look at My Neck?” Turtleneck. But let’s go with the first one. I would let Gillian Anderson do a lot of things to me—I’m talking weird shit. Foot stuff? Sure. Lost & Delirious cosplay? Why not. Eat Apple Jacks off my nubile body? If that’s your thing. But when I see her in this Slytherin ass coat, I want her to end my life. Rob of me of my last dying breath, Gillian. Lobotomize me, queen. 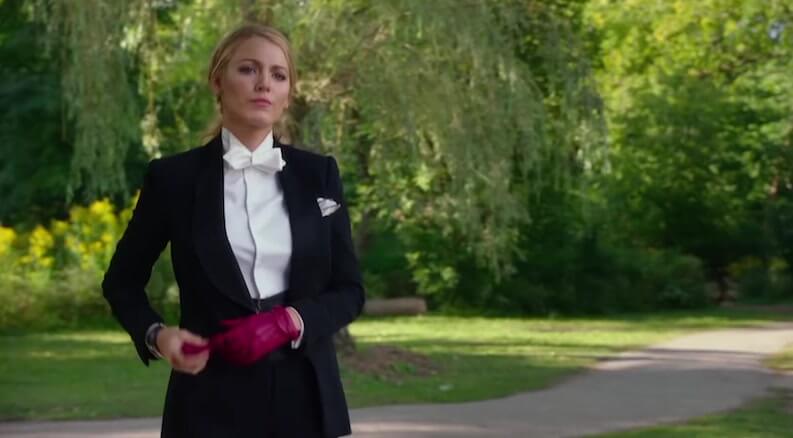 What are these red gloves? What sick lesbian mastermind breathed life into this idea? I have spent dozens of waking hours lying in bed staring at the ceiling, thinking about these magnificent magenta gloves. They’re not gloves for use; they’re fashion gloves. As we know, gloves are lesbian, and that is canon—or at least it became canon after Cate Blanchett asked Rooney Mara to lunch over a fucking singular glove in Carol. Is Blake Lively’s glove from A Simple Favor a nod to Carol? Probably. There are no coincidences—just derivative works of Carol. 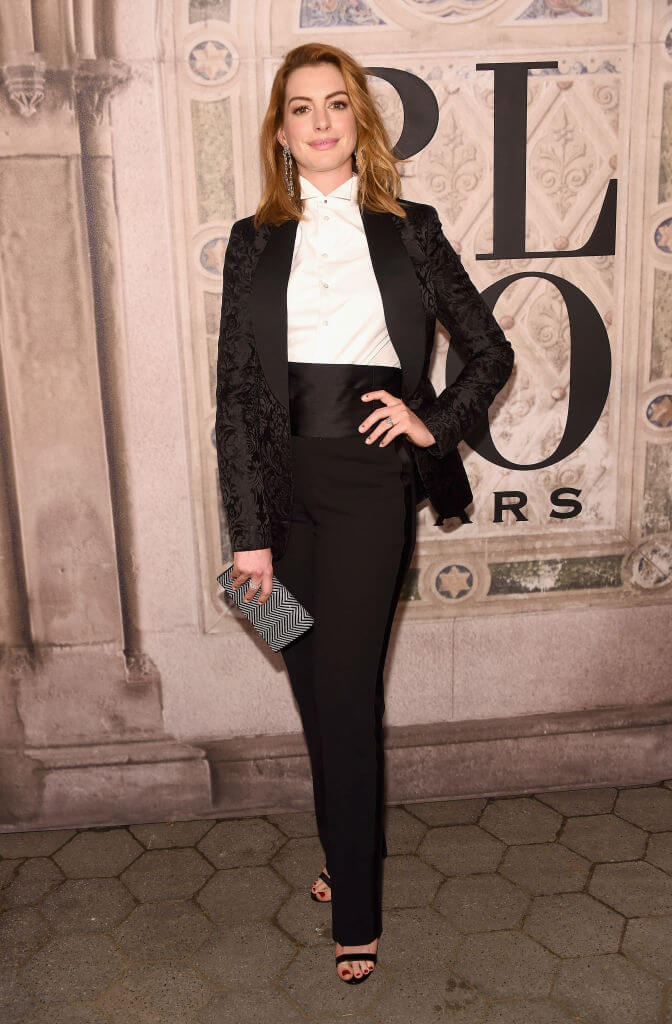 Remember when America collectively hopped on the Anne Hathaway Sucks bandwagon for no reason, but then decided she was cool again after her performance in Ocean’s 8? Well fuck all of you, I’ve been a loyal Hathanator since she pwned Mandy Moore in The Princess Diaries. Anne Hathaway is a national treasure. How DARE you.

Right, the suit. Anne attended the 50th anniversary Ralph Lauren show at Fashion Week in this Coming Out as a Beloved Actress Again Suit. The shirt’s angular collar says, “I will cut you,” while her velvet, floral black blazer says, “Seriously, I sliced Hugh Jackman during production on Les Mis because I was bored and I will not spare you either. Good day.” 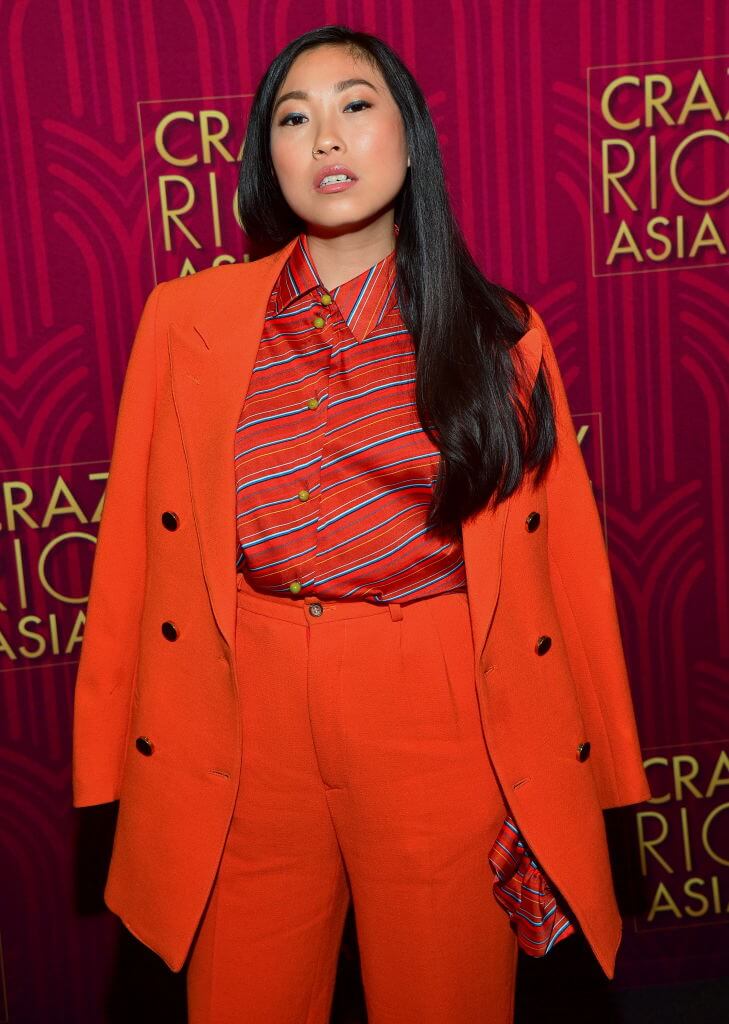 God bless the Ocean’s 8 press tour but also god bless everything Awkwafina does, like attending a screening of her movie Crazy Rich Asians in Atlanta. Eck-fuckin-scuse me?

The Gaze / The Gays / The Gayz Suits 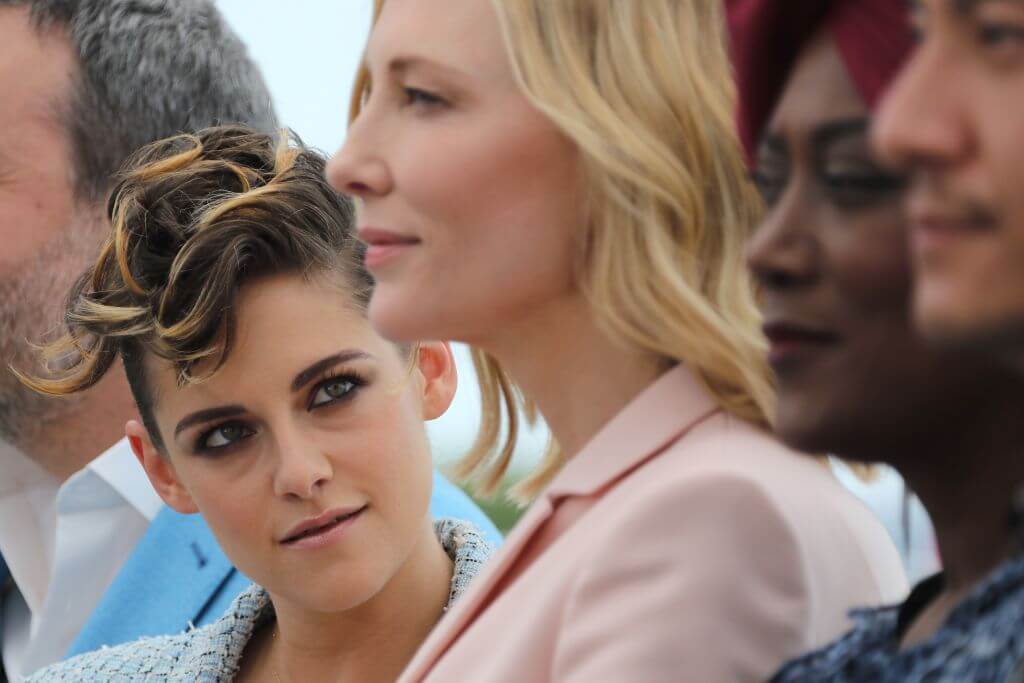 Who could forget The Great Gay Gaze of 2018? This year, Cannes was legendary, not only because its jury was majority female, but because Cate Blanchett headed that jury alongside Kristen Stewart and Lea Seydoux. They left a trail of loose suits littering the coastal French town like a school of dead, washed up fish on a toxic beach. Cate’s pale pink suit and Kristen’s textured baby blue suit were two of my favorite gay outfits of the year, and then they went ahead and stood next to each other and did THIS. I mean, who amongst us hasn’t gay gazed at Cate Blanchett? Kristen Stewart was just caught in the act. Wouldn’t you carpe the diem if you had one shot to gaze at Blanchett up close?? 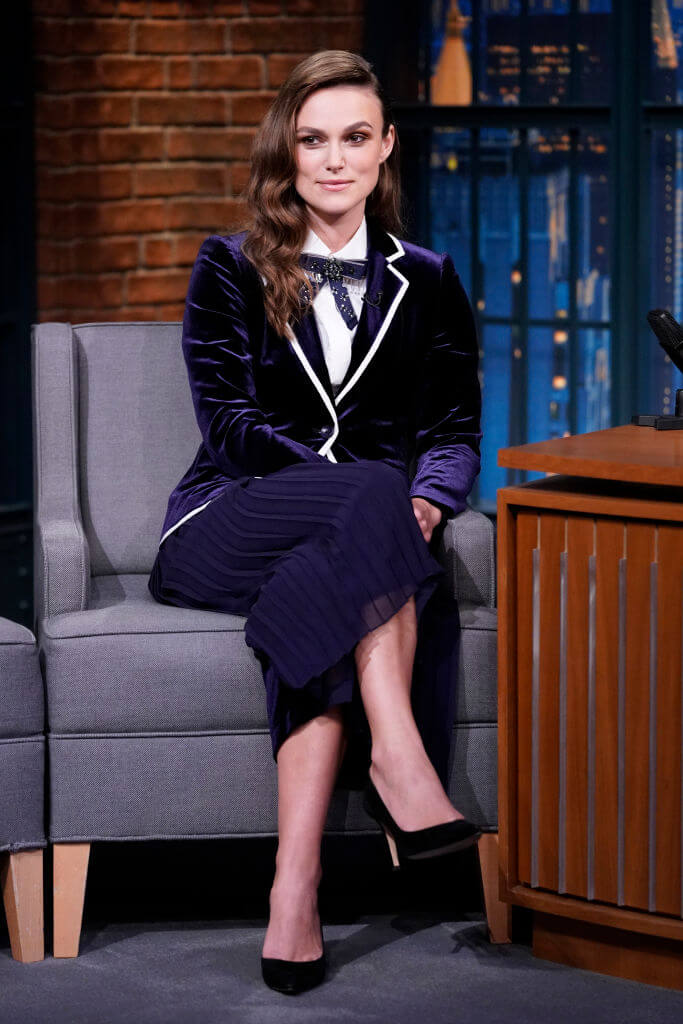 I’m not sure what about this outfit screams “bar mitzvah” to me—maybe its navy-blue shimmer with a stark white contrast, which reminds me of a tallit—but I can just picture Vanessa Bayer’s Jacob the Bar Mitzvah Boy character growing up to be a sexy as fuck Jew and wearing this exact outfit. As a Jew, I was never bat mitzvahed, but maybe I would’ve wanted to be if I knew I could grow up and wear this pearly white-trimmed suit jacket on Late Night with Seth Meyers, like Keira Knightley did on her Colette press tour. P.S., I love how a bunch of straight actresses who starred in queer movies decided to Gay their press tours this year. It was the right thing to do, ladies. 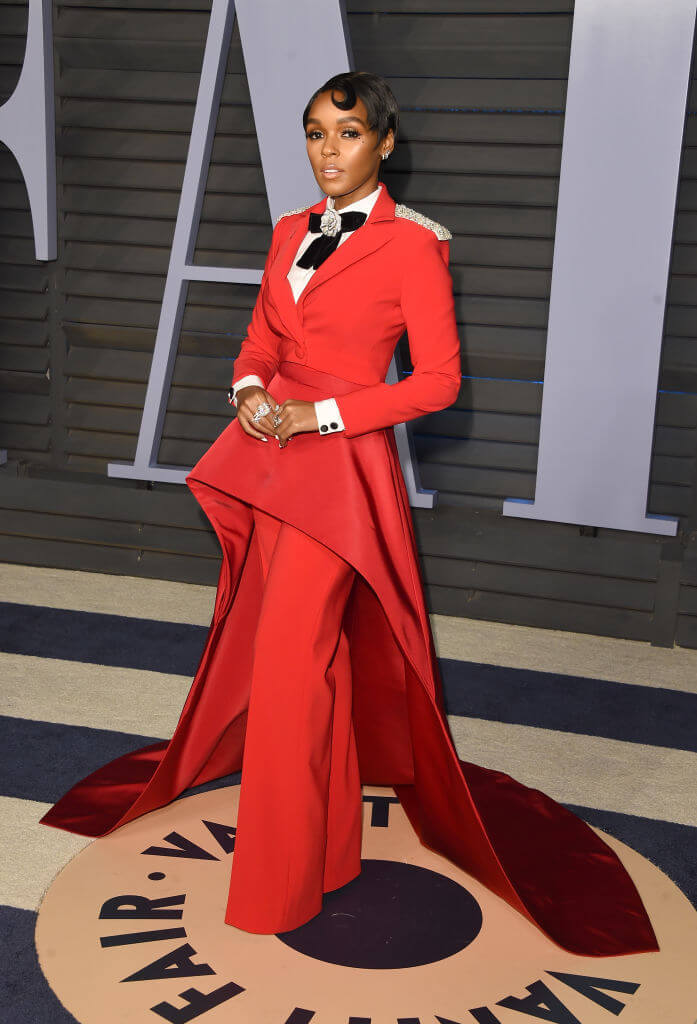 Do me a favor and don’t even look Janelle Monae in the eye. You don’t deserve her. Have some goddamn respect for your pansexual queen. This lurid red tuxedo-dress says “no” so you don’t have to. It’s perfect for walking into a room of men who want to explain things to you, like Amazon’s business model or what populism is, and before they even open their unworthy mouths to spew their nonsense, your suit says “not today, pal,” for you. Look the fuck away. My suit is red. No. 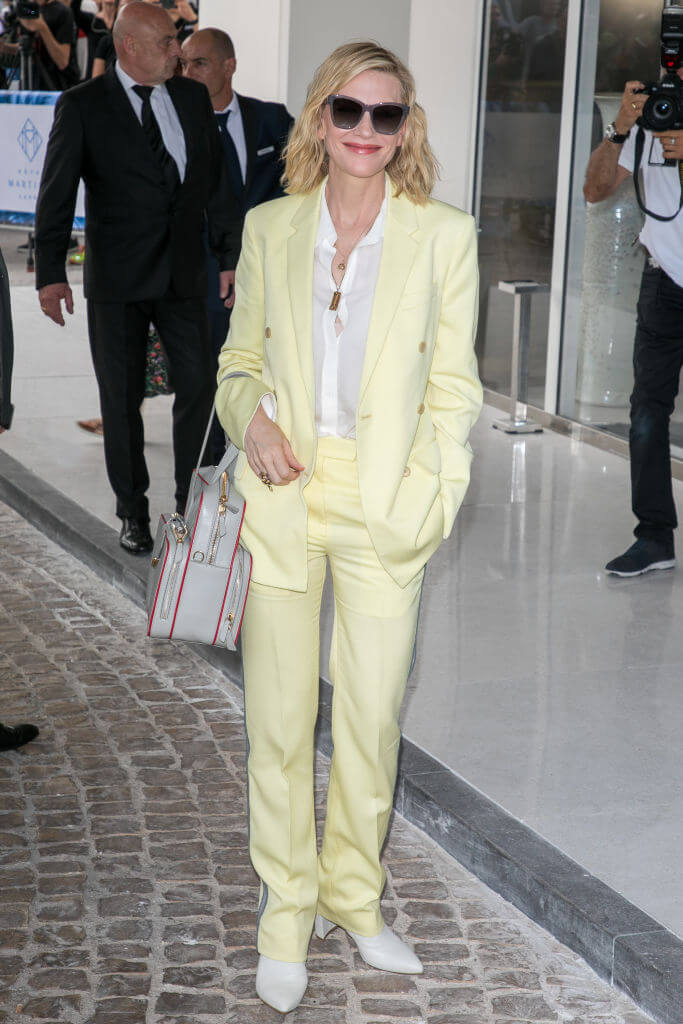 I said what I said.

Lady Gaga has been doing a significant amount of outreach to the lesbian community this year. She’s always been Mother Monster to gay men, but in 2018, Gaga decided she was actually for queer women too. On the red carpet for Variety’s Actors on Actors event, she sported a perfectly tailored all-black suit, including a black dress shirt, midnight tie, and a loose up-do. Her outfit says, “I challenge Cate Blanchett to an Extreme Suit-Off” while her hair says, “Yeah, I played sports in college, fuck you.”

At Elle’s Women of Hollywood event, where Gaga also wore a power suit, the singer said, “I tried on dress after dress today getting ready for this event, one tight corset after another, one heel after another, a diamond, a feather, thousands of beaded fabrics and the most beautiful silks in the world. To be honest, I felt sick to my stomach.” She added, “This was an oversized men’s suit made for a woman. Not a gown. And then I began to cry. In this suit, I felt like me today. In this suit, I felt the truth of who I am well up in my gut.” How many queer women have been there? 2018 was the year women said “enough,” and broke free from the chains of the patriarchy to wear whatever the fuck they wanted. 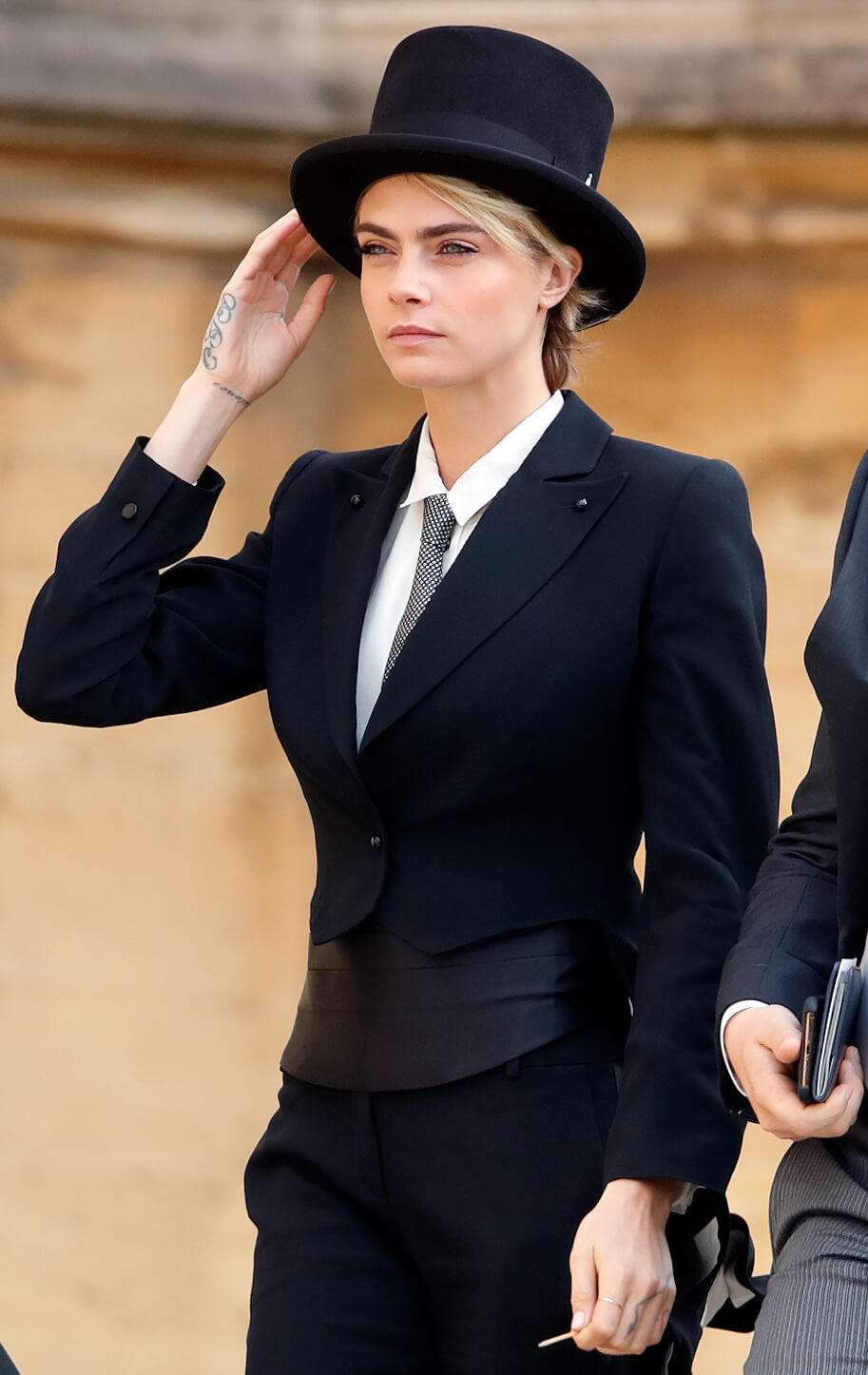 Speaking of which, bisexual model and actress Cara Delevingne wore a top hat, cummerbund and coattails to a royal wedding—a uniform British men traditionally sport as formal wear. All I can say is: Abe Lincoln is fucking bald. I don’t think I’m being dramatic or radically revisionist at all in saying Cara did top hats first, Abe. So, fuck right off.

Rachel Weisz starred in two lesbian movies this year, one being Yorgos Lanthimos’ queer period film The Favourite. While lodged in the heart of a lesbian love triangle with Queen Anne (Olivia Colman) and her distant cousin Abigail (Emma Stone), Lady Sarah (Weisz) threw on some traditionally British menswear, a feathered hat, and shot a musket in a British accent. This movie was jam-packed with paralyzingly lesbian outfits, which I detailed at length back in October. I swear to god, if the last thing I ever saw was a crusty wooden musket in the delicately gloved grip of Rachel Weisz, I would die a happy lesbian. 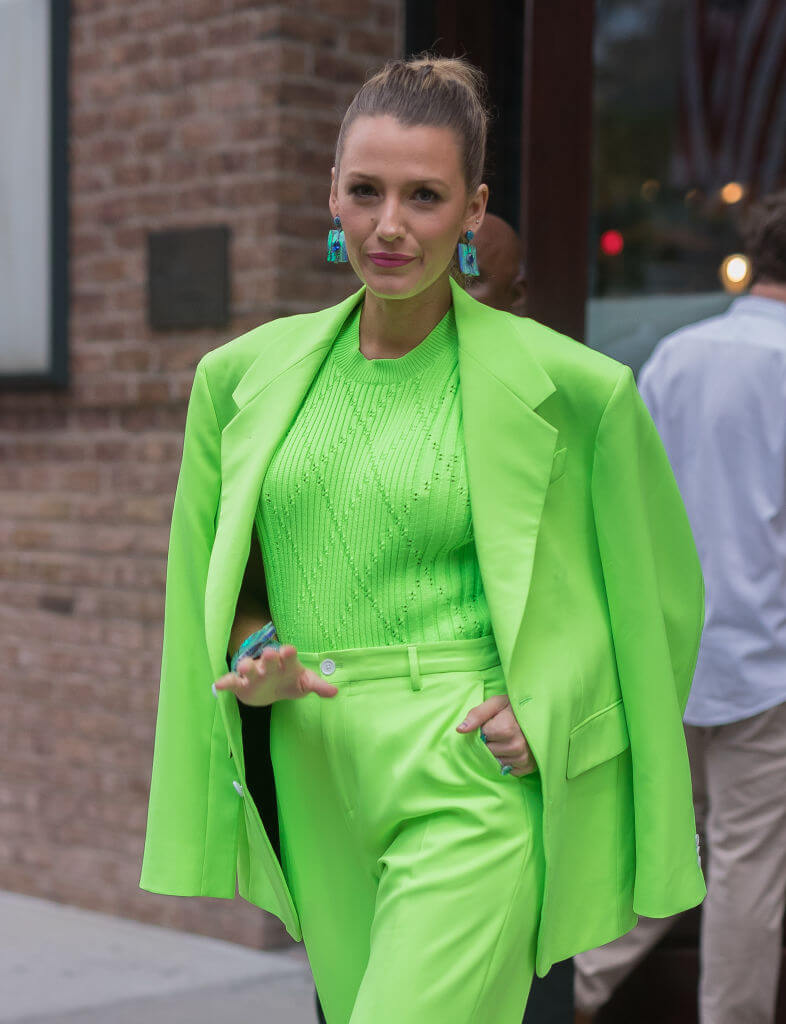 This suit split gay Twitter in two: Is it perfect, or is it terrible? The answer is both, which is exactly why I adored it. I want something that simultaneously repulses me and paralyzes me, something that elicits a visceral reaction similar to vertigo—something that makes my vision go blurry because it’s just so outrageous. That’s this suit. I want it dead, and yet I want it on me. It’s like Blake saw a stunt double in a green morphsuit and was like, “Perfect—now make it fashion.” 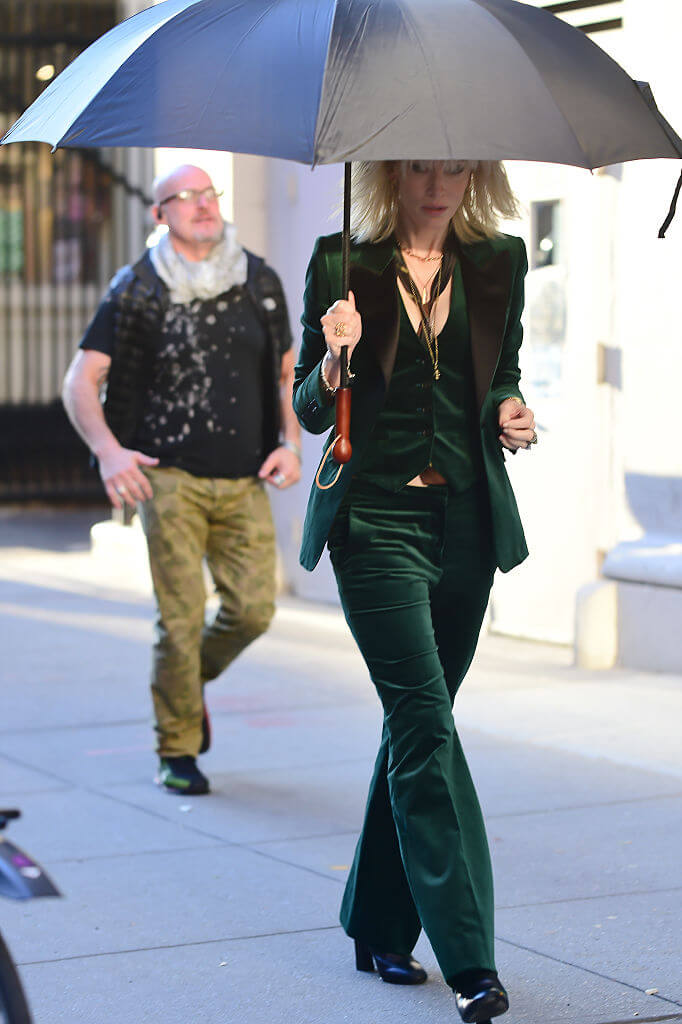 This year, I wrote about how every outfit Cate Blanchett wore in Ocean’s 8 made me gayer—the pale blue suit, the chef’s whites, the gay vest, the gorgeous waterfalling coats, the disco jumpsuit with unzippable cleavage, the Avril Lavigne Lesbian ties… But one outfit will be branded in the back of my skull until the day that I die. I’ve stored it where I store every embarrassing thing I’ve ever said or done which I spiral about in the dark of night. It’s the storied three-piece emerald suit.

I would say I want this image tattooed on my face, but it wouldn’t be enough. It wouldn’t accurately depict just how much I care about this outfit. The vest, the flare pant, The L Word tie, the scarf from your grandfather’s closet that smells like soup—This suit will plague me forevermore. On my wedding day, there will be a brief pause when my future wife is waiting for me to say “I do,” and I’ll be biting my lip and surreptitiously looking at the floor, kicking my feet and wondering—I can’t marry a suit, right? Jill, you’re being crazy. And then I’ll say “I do,” but I won’t mean it. I will hold out for this suit, because that’s what you do for true love: You hold a candle for your soulmate.

And shoutout to literally everything Dua Lipa wore in 2018. She looks like trap Sporty Spice and I’m here for it.