Horror cinema has often included queer characters that usually end up, well, horrific. With lesbian-themed films in the genre, the villains are lesbian vampires, narcissistic cannibals, and the always-popular obsessive best friend, every facet influenced by the character’s sexual identity, reinforcing the idea that queerness is evil and will drive lesbians or bisexual women to kill.

But in IFC Midnight’s latest feature, What Keeps You Alive, the lesbian couple at the center is facing something that has little to do with their sexuality. Instead, it has everything to do with truly knowing someone. When Jules finds out her wife Jackie has been highly secretive about her past, a week away in the woods by themselves turns into a deadly game of cat and mouse, with the two women alternating roles throughout the film. 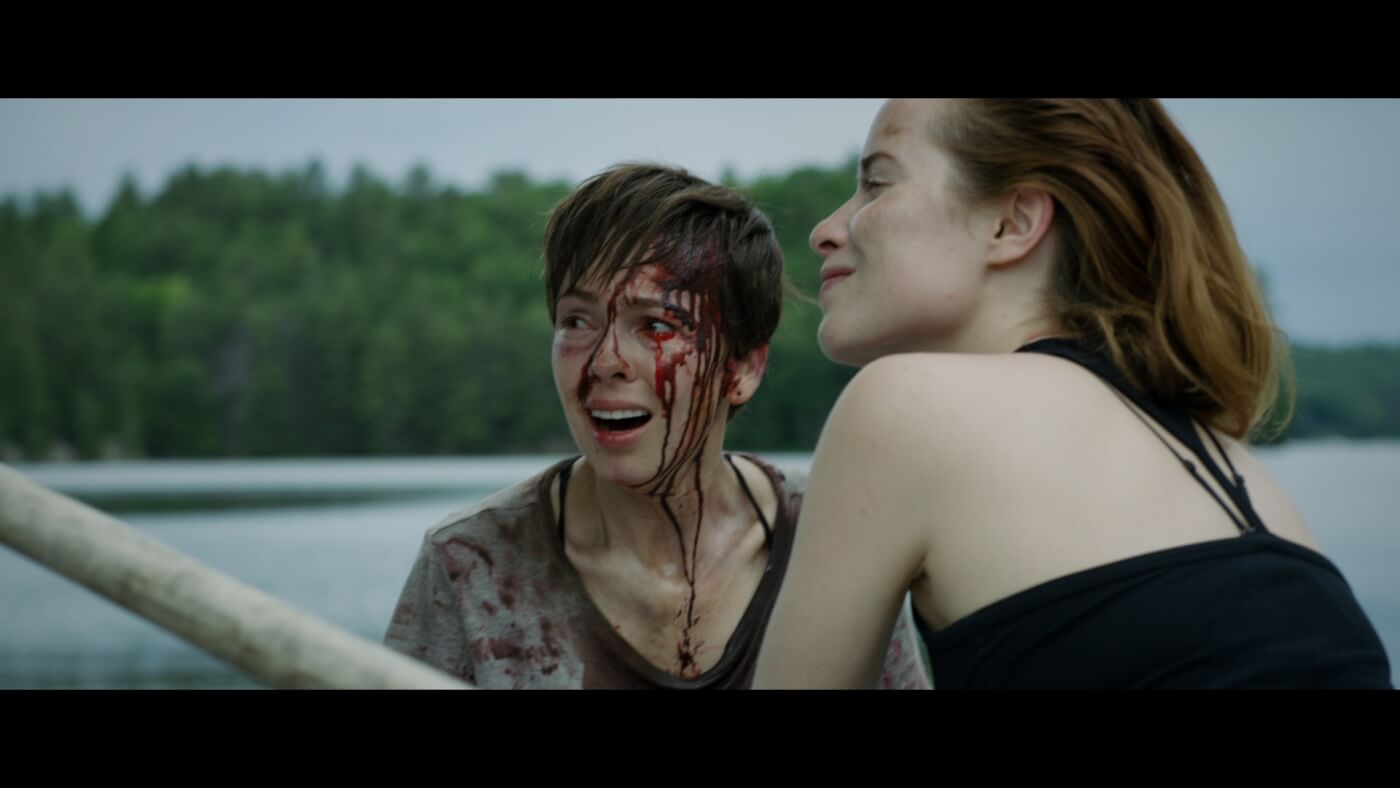 Interestingly, writer/director Colin Minihan originally wrote the film to be a heterosexual story. He tells INTO he wrote the script for a male actor, a friend whose casting on another project made him unavailable, sending Minihan back to the drawing board. And what evolved was an ability to explore a too often one-note characterization of the female psychopath.

“Changing it to a woman, I expected there to be more challenges,” he says, “but it wasn’t as hard as you would think, you know? It doesn’t matter. The sexuality just wasn’t ultimately a factor.”

Minihan’s real-life partner Brittany Allen stars as Jules, the unwitting wife to the secret psychopath in question, Jackie (Hannah Emily Anderson). Jackie’s eerieness is established early on when a neighbor calls her by a different name, and again, when she grabs a guitar to croon a cryptic song (“Bloodlet” by the Canadian artist Munroe) with lyrics like “There’s a demon inside/Bloodlet it out.” Still, Jules isn’t concerned. Jackie is able to explain away the name change, as her former name, she says, reminded her too much of her former best friend, Jenny, who died in the very lake they are facing in their summer house. But even the story of Jenny’s death is a new revelation for Jules, who is suddenly questioning how much she knows about her wife — and that’s when things take a startling turn. Without spoiling too much, Jules realizes that Jackie isn’t who she thought she was, and that she’s now having to defend herself in order to stay alive.

In another filmmaker’s hands, this narrative would turn into a hypersexualized battle between two femmes; a male gazey mess rife with hokey jokes and ripped tank tops revealing much of the women’s skin. Sometimes, this girl-on-girl scenario can even turn into sexual violence, with one woman forcing the other into a non-consensual situation. Thankfully, Minihan doesn’t rely on any of those lazy tropes for his leads.

“That’s something that I was actually quite cautious about doing,” Minihan said. “Obviously exploring the relationship with a same-sex couple, when it becomes violent, I didn’t want the sexuality at all to be a part of the conflict. So in just the very notion of conveying betrayal — betrayal is not a sexy thing, and at the end of the day, one of these characters has some screws loose in their head. That’s not a sexual thing, either — it’s a part of who they are and a part of the foundation of the very fabric of their being.”

“We did not want to sensationalize or mischaracterize our representation of this couple,” Collins says. “My goal with everything I do is just treat it as truthfully and honestly as possible. It was mostly just about connecting to Jules and Jackie and the situation, and committing myself fully to that.”

Her character, Jules, is the more androgynous of the two, sporting short hair and baggy Ts, boyshorts and sports bras. Jules was modeled after another lesbian horror character, Collins says: Cécile de France’s Marie from the iconic French film High Tension. But in her case, Marie was the aggressor, which is revealed in the third act in a sinister twist revealing that she was, of course, in love with her best friend who didn’t return the feelings, so Marie, in a manic craze, murders her family.

“It was very liberating playing Jules and from cutting my hair to not wearing any makeup to wearing clothing that was cool, but not overly stylized one way or the other,” Collins says. “And finding a deeper register of my voice and coming from a place in me that was not passive. It wasn’t forced. It was not a forced masculinity, but it is a bit of an anti-femininity that my character lives in and that was new to me.” 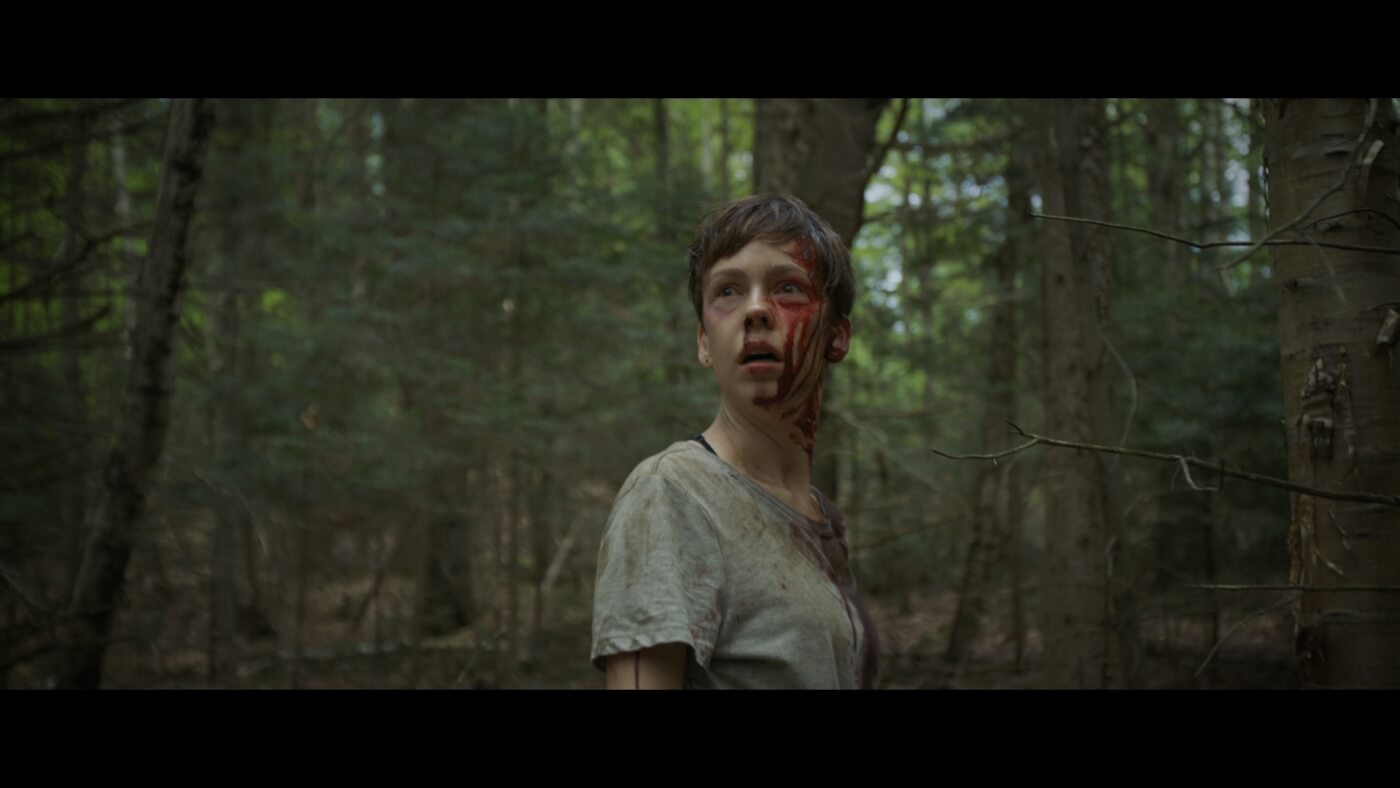 What also sets What Keeps You Alive apart from other modern horror films is the naturalistic way it’s shot, with Minihan allowing the audience to feel unsettled in the unraveling of the unpredictable endgame. Collins and co-star Anderson are magnetic together and apart in their hunt for and hiding from the other. There’s no gore for gore’s sake; no gross cliches to rest upon. The fact that the women are lesbians isn’t a plot device — instead, it’s a bonus for queer viewers who rarely get to see themselves as both the protagonist and antagonist, with their lesbianism having nothing to do with the horror at hand.

“For me, that is just not the direction to go, and it’s sad that you still see movies that convey LGBT characters in such a fashion,” Minihan says. “But again, it’s one of the things I realized when translating the script to a same-sex couple that I thought was unique about the film — because so little of it has to do with their sexuality that I think it normalizes just the idea of, ‘Oh wait — this is a regular couple but there’s a dark secret here.’ And that’s something I often think when people set out to make a queer film, they really make [their sexuality] the forefront of the film. And for me, it was never really the forefront.”

What’s scary in What Keeps You Alive is the idea that Jules thought she really knew Jackie. Flashbacks to deep conversations and romantic moments in bed together become more and more painful as Jackie reveals just how little she’s ever cared about her wife; that she’s done this before, and has gotten quite good at lying. She’s become an expert at getting what she wants out of her lovers — lovers who just happen to be women. And while the film doesn’t explore why lesbians might be more susceptible to this kind of deceit (which, in this writer’s opinion, makes for a more believable story, considering that the stereotype of lesbians falling hard and moving fast exists for a reason), their being two women plays well for this kind of questioning of how well Jackie really knew Jules before saying “I do.”

The true horror of making a film about a same-sex couple is less about the framing of the narrative than it is about the very real issues of wider distribution in homophobic countries. Financing, Collins says, was easy — he made it on a tiny budget with a small crew and an investor who believed in the story (and was “was very excited by the change to a same-sex relationship,” Collins notes).

“However, overseas, when you’re trying to get a distribution deal in Russia or China or the Middle East, they will just not take the movie at all,” he says. “Simply because it is a same-sex couple. The distributors know that they won’t be able to release it, [given] the governments’ mindset.”

That was never a deterrent for Minihan, though, who saw the film premiere at SXSW this year and play several LGBTQ film festivals before being released today in select theaters and on demand. Reviews (from mostly men at major publications, it’s worth noting) have been positive, with The New York Times noting What Keeps You Alive “plays a bit like Get Out for gay marriage” and NPR calling part of the plot twist “satisfying.” In a time when we still question the ability for straight cis men to depict women — especially women in relation to one another — it’s a true marvel when they’re able to get it right.

Finally, instead of Final Girls flailing about in torn-up tank tops, we’re getting to focus on the horror of what happens when the lover you thought was true ends up trying to kill you.

What Keeps You Alive is in select theaters and on VOD now.