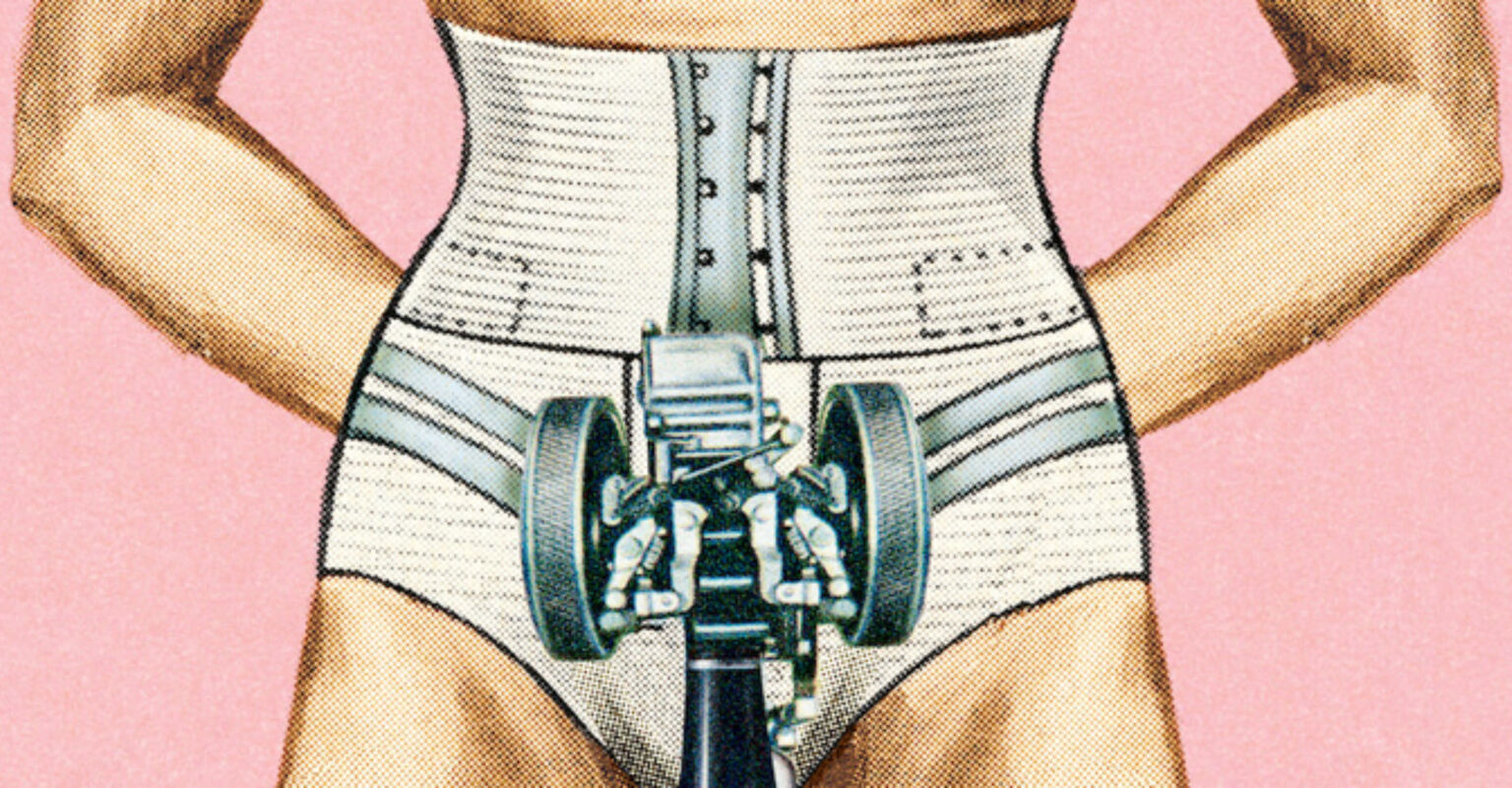 October is perhaps fall’s most unadulterated autumnal month. There’s a crisp wind, leaves wear earth tones, and the pumpkin spice lattes flow freely from baristas’ hands into white girls’ mouths. But there’s another October tradition that gets a little less attention than Hocus Pocus rewatches, and that’s the custom of people locking their genitals in cages and denying themselves access to their own genitals for 31 spooky days of chastity.

Talk about Locktober online — even if you’re, let’s say, looking to interview people for this story — and the mention of it will elicit a range of reactions from curiosity to laughter to befuddlement. What would spur a person to put their penis behind a padlock for a whole calendar month? For participants, Locktober holds lessons about their own sexuality and how they must get creative to feel pleasure when their primary sexual organ is shoved into a plastic tube.

“Locktober is the kinky version of Lent,” says Pup Taz, a member of the leather community and holder of the title Mr. SoCal Leather 2018, referring to the Christian season of atonement and reflection. This is Taz’s first year participating in Locktober, though he’s done chastity play before.

Chastity play and Locktober have almost nothing to do with what the average person might think of when they hear “chastity device.” Usually, people default to the (misbegotten) myth that medieval women wore chastity belts to prevent intercourse while their knights were off fighting the Crusades.

Danny Cruz’s device is called a CB6000. Cruz is a sex worker who also co-hosts a sex work and education-themed podcast, On the Dresser. His all-plastic device has three pieces, interlocking like a 3-D puzzle, and a lock keeps the disparate parts in place. The plastic tube sports a hole allowing Cruz to pee and side holes for ventilation. He has to take the tube off pretty frequently to clean it: a dick encased in a plastic tube all day can be a breeding ground for bacteria and must. He self-locks, so when it’s off, it’s up to him not to use the time to jerk off.

“Half of chastity play is in your head,” Cruz said. “Cold shower, work out, get your mind off the intense feelings of horniness.”

“If I had a key holder, I’d probably be thinking about them and how to get that key,” he said.“I don’t have one, so now it’s like a self-discipline, like ‘OK, you feel this, you’re frustrated, you have to tough it out.’”

Taz switched devices halfway through the month. He began October with a cheap plastic interim device ordered online. Then, his custom device arrived. It featured specific measurements for the width and length of his dick and the gauge of his Prince Albert piercing dictated the device’s shape.

With their dicks sidelined for the month, both Taz and Cruz said they resorted to new avenues to find ways to orgasm.

It might sound like chastity play works purely on an economy of restriction with few upsides. And yes, much of it sucks — both participants talked about chafing and pinching and nightmare nighttime erections. It’s too easy to see chastity play and emphasize its restrictions, a view that only captures half the reality. On the other end, both Taz and Cruz said Locktober allowed them (like a good dom/me!) an opportunity to reimagine their sexuality and to begin a new relationship with their bodies and their sexual partners’ bodies.

“I thought I knew all my erogenous zones,” Taz said. “Then I went to my friend’s house, we were fucking around and some of the areas he was touching me — who would’ve known getting touched on the side of my chest, between my armpit and nipple would turn me on this much?”

Some other surprises Taz has encountered? He’s learned that his ass can fit more inside it than he previously conjectured and that he spends a lot of the day mindlessly touching his own dick in some way, often out of sheer boredom.

Maybe the mindless grabbing of one’s own penis works as a metaphor for the casual and unexamined way that penises dominate queer male sexuality — and the way that Locktober forces its participants to envision a queer sexuality in which penises must give up center stage.

“You have all the same urges of wanting to fuck and do all of this activity but you have to place that energy elsewhere, because your dick, until that lock is removed and that cage comes off, you won’t have the satisfaction you want,” Taz said. “You have to play with your ass or your nipples or have your throat fucked to channel that energy.”

Taz believes that part of chastity play’s power lies in its challenge to the cultural power of the penis.

“There’s a power in denying someone that’s read as masculine access to their dick,” he said.

Can you fight the cultural primacy of the penis by putting your own behind a lock? Yes, in some ways, this is a micro-level response to a pervasive cultural problem, a problem that seems to have become only more prevalent in recent years with the rise of Donald Trump, whose penis has grabbed headlines since before his ascendance to the presidency. Trump used national television to defend this size of his penis during a presidential debate in March 2016. In August of 2016, naked statues of Trump with a tiny penis popped up across the US. And, faster than you can say Mario Kart, Stormy Daniels brought Trump’s Toad-shaped penis back into the news cycle.

It’s clear: we’ve reached peak penis. We have no breathing room. And so, maybe a few people locking up their dicks have pushed back against the too-oppressive pervasiveness of dick.

While dick takes up a lot of space in our cultural conversation, Cruz said a similar phenomenon is at work within the queer community: gay men don’t seem to be able to envision a sexuality that isn’t penis-centered.

The most surprising part of the month for Cruz has been dealing with the way other men react to the device. Cruz advertises the device on Grindr, cruises while wearing it in the bathhouse, and has had hookups while it’s on.

“A lot of the reaction I get is like, ‘Ew, if I can’t touch your dick, what’s the point?’ It left a weird taste in my mouth,” he said. “I didn’t like that approach to sex.”

Cruz added, “If you think of how gay men interact, there’s a whole lot of grabbing each other or grabbing your own dick.”  But, he said, “Now that I can’t pleasure myself how can I focus on my partner? That’s been cool because my hands can go elsewhere. I can keep them totally free. I can stimulate a couple of places at once.”

Panicked reactions to his cage have also led Cruz to think about the ways — subtle and overt — in which cisgender gay men often exclude transgender gay men from designated queer male spaces. A simple plastic tube, it seems, challenges their penis-centric sexual worldview.

“I worry about the panic I see from guys sometimes,” he said. “The word of the month for me has been phallocentrism and trying to get guys not to be phallocentric.”

Cruz said that the negative reactions to his lock have forced him to think about what that might mean for trans men and other people without penises who try to engage in queer male-dominant spaces.

“I’ve definitely had that thought of like, ‘Shit, if I’ve had that reaction!’” Cruz said.

One positive development Cruz does point to, though, is that the people’s he’s encountered sexually in the past month have been better lovers.

“They know what they’re doing outside of themselves,” Cruz said. “They know how to be open to a partner and just be dick-in-the-butt kind of people.”

According to Cruz and Taz, being vocal about their experiences online with Locktober has led other people to seek them out on social media and inquire about how to involve themselves next year. #Locktober 2019 looks like it’s about to be lit. There will be fewer dicks free roaming the streets and more people learning about pleasure beyond the penis.

But before we get to October 2019, what about November 1 — let’s call it Cumvember?

Cruz confessed that his time in a cage will end before November 1, as a client of his is paying him to break his lock early, which means his plans for November 1 are simple.

“I plan to spend it with money,” he said.

“I will just throw [the] pumpkin away afterward,” he said. “There will be pumpkin guts on my dick, but in the moment I think it’ll be plenty fun.”