The pilot for West 40s, a new gay web series released on July 12, follows a gaggle of gays from brunch to a birthday party gone awry as the youngest of the group, Luis, turns 40. If Sex and the City and Broad City had a baby web series with five over-the-hill gay characters, all of whom were a different mix of Samantha and Ilana, it would be West 40s.

INTO sat down with Mark Sam Rosenthal and Brian Sloan, the series’ co-creators, to learn why the hell, how the hell, and what the hell is going on with West 40s.

So, who the hell are you?

Brian Sloan: Oh yeah, yeah. I am a writer-filmmaker. Kind of started in the indie world in the ’90s with the Boys Life series. I had a couple shorts in those series. And then I did a feature called I Think I Do with Tuc Watkins and Guillermo Diaz, and then another feature with Michael Urie, which was called WTC View. And I’ve worked on other movies as a producer or writer.

MSR: And for myshelf… So I’m a writer-producer at Comedy Central, which is why I’m out [in Los Angeles] right now, and I’m also a playwright, with some Off-Broadway solo shows that I’ve done. You might remember Blanche Survives Katrina in a FEMA Trailer Named Desire. And also a background in improv comedy from years of the Upright Citizens Brigade. So that’s sort of the place that I’m coming to this from — comedy.

Could you tell me a little bit about the genesis of the project?

MSR: And we met at Stonewall Bar on amateur strip night. But neither one of–

BS: A riot of a different kind, as I like to say.

MSR: “A riot of a different kind.” True enough.

MSR: So yeah, we became friends. We bonded over our mutual admiration for boys dancing in jock straps and started collaborating on a couple of writing projects. And then, a few years ago, I turned 40. And that’s a big perspective shift; or, certainly, it was for me, round about 40. And I was living in this tenement apartment in Hell’s Kitchen and I was looking around the neighborhood getting younger and gayer, and I’m getting older and gayer. And we were just like… you know, I guess Brian and I have a very observational sense of humor, like, “You won’t believe what I saw today!” And we would just be sharing these stories with each other, you know, making each other laugh on these observations on getting older in a younger world. (chuckles) And we decided, “This is really damn funny, this is what makes us laugh, and we don’t see this anywhere.” We’ve not seen a “coming-of-middle-age” comedy, if you will.

BS: Yeah, I think usually when this kind of subject comes up in, I mean, any kind of drama or comedy, straight or gay, it’s usually treated as, like, “Oh no, I’m turning 40! It’s, like, the end of my life.”

MSR: Or there’s just a lot of angst.

BS: Yeah, a lot of angst, a lot of gloom. And our experience was sort of different. We saw a lot of the humor in it. I mean, there’s definitely challenges, in terms of aging and being in your 40s, but we see them as challenges that can be funny. It’s like the song that we have the in the show — the theme song, “Sex and Love and Back Pain” [by Jamie Cowperthwait]. It’s sort of like, “Yeah, that’s what’s happening.” But if you can laugh at it, it just kind of makes it easier (chuckles) to deal with.

MSR: Yeah. I mean, I’ve always been one for gallows humor, anyway. 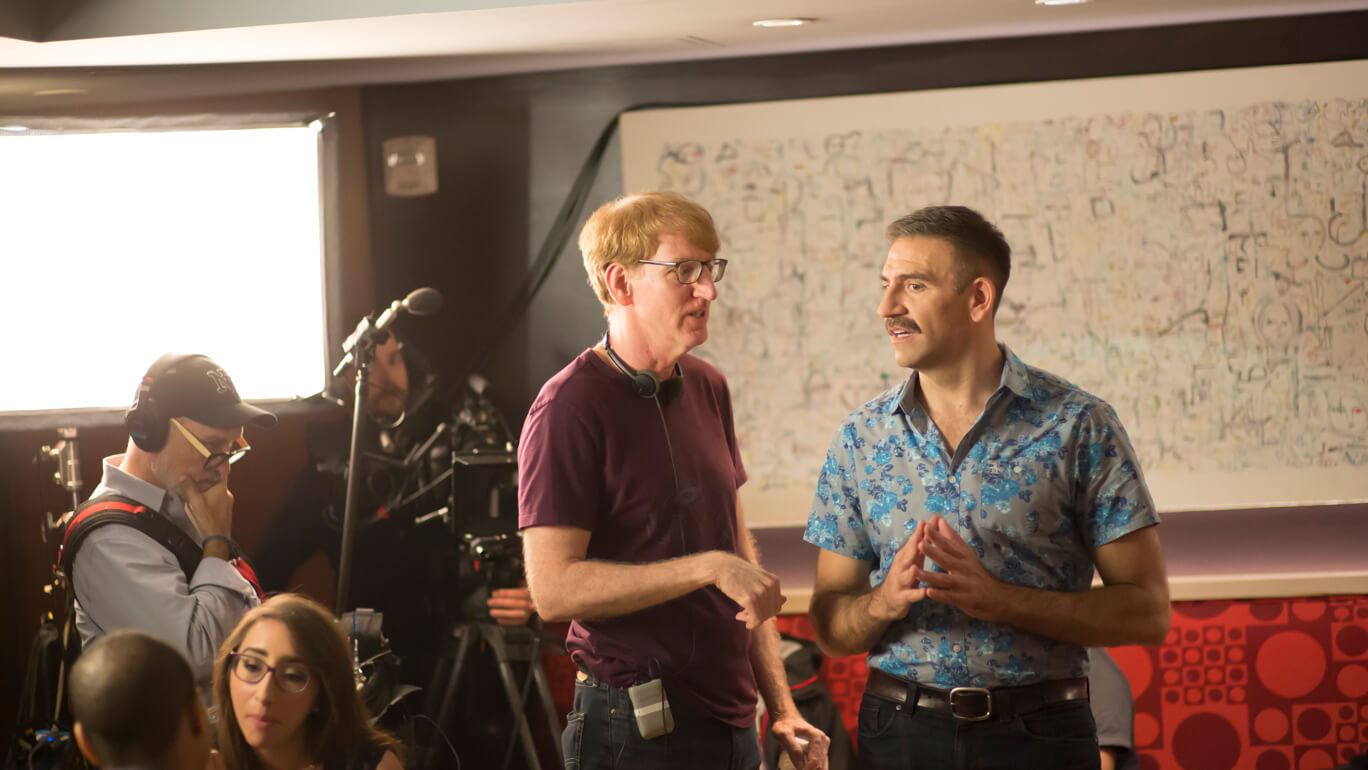 Why a web series?

MSR: You know, what’s really funny is that I just was… I don’t know, Brian, a couple of years ago, you approached me with the idea of writing and producing a web series, and I don’t know if you recall, but I was very like….

MSR: I hadn’t really seen, you know, what I thought was really quality work online, but I hadn’t been seeing the right stuff. And Brian actually directed me to a couple of web series, and he said, “Well, actually, I think you should check these out.” One of them was called The Outs, which was also a New York-based web series with gay characters. Very different storyline. It’s dramatic; it’s not the comedy that we’ve created. Different types of characters entirely. But it was filmic, and was really well produced and well written and–

MSR: You know? Which, of course, I’m a writer, so that really appealed to me. And it let me see the possibilities of web series, whereas before, I had a very narrow and cheap definition of it. And so I really thought, “Well, this is… that’s an amazing possibility.” And then you get it out to the whole world, you know? It’s limitless.

BS: Yeah, and I think the definition of what an online or digital series can be has changed in the last couple of years, and that it’s a more flexible format for our show, where definitely, every episode is not the same length. Some are a little longer, some are going to be a little shorter, but I like that flexibility, too, because I think we talked about conceiving our show as sort of episodic, in that we’d be telling kind of little self-contained stories, in a way, and seeing each episode almost as a short film, as opposed to a more serialized story, where there’s a cliffhanger at the end or something like that. So I liked that idea of dropping in on this group of friends, and seeing what’s happening, and then, each episode, there’s a story, and that’s what you’re focused on.

MSR: I’d also add, just as a lesson that, from working at Comedy Central — and, like Brian was saying, the definition of what a just digital series can be has changed in the last couple of years — on the job, I’m seeing more things being developed, even by the network, online. Everybody’s using it as a great place to experiment. And so why not us, too?

Given that the pilot was crowd-funded on Kickstarter, could you speak a little on how that changed your development process and audience engagement?

MSR: Well, the first thing that comes to mind is this… And Brian had told me this would happen. I was like, “I don’t know. This Kickstarter thing seems dicey.” You know, that’s always my first reaction.

MSR: But the thought that comes to mind is: In crowdsourcing this, I feel like we’ve really built an audience and a family for the show before it even existed, which is not something that I see happen. Look, I mean, my job is as a writer-producer in promos for Comedy Central, right? So my job is to create 30-, 60-second pieces that give you awareness of a show and then, hopefully, [let you know] that you want to watch it, too. But you’re coming at it from a place of, “Nobody knows what this show is.” That’s always the start of every new show, right? So it’s a really cool experience, having gone the crowd-sourcing route, and sort of feeling this awareness and audience build before we had even created the pilot episode. That’s not what happens, in my TV experience.

Does that change the way you produce the show?

MSR: It just means we have to do it cheaply. (laughs)

BS: Yeah. (laughs) I think when you do the fundraising on Kickstarter, it does kind of motivate you to really finish your project, because you know people are waiting. Like they’ve “invested” money. I mean, “invested,” I put in quotes, but they’ve, you know, really invested their interest in you, and money, and it’s like, you don’t want to disappoint people, you want to give them what they expect. So it is kind of great to know that, at the end of this process, there’s already a group of people who are just very engaged and really want to see this succeed. So that, for me, helped me a lot, you know, ’cause when you’re making these projects, it’s a lot of work, it’s a lot of time and long hours. And it keeps you motivated.

BS: (laughs) They keep aging, they keep aging. Another 40-year-old is born every minute. No, I don’t know. (laughs)

MSR: Another 40-year-old was born 40 years ago every minute.

BS: Yeah. Well, I know for one thing, I noticed online, there’s lots and lots of shows about younger people and it’s partially because they’re a little more adept at the medium, and partially because they grew up in that medium. People who were watching YouTube as a kid almost are now making their own shows. And a lot of those shows are geared towards just a younger audience, people in their 20s, and they’re made by people in their 20s. And I was just like, “Well, you know, people in their 40s know how to use a computer, too, and there should be more shows for them.” There’s a real gap here in content that just doesn’t exist for an older audience. And that’s something I thought we could fill in.

MSR: I think that I would just add to that, that I actually feel the way some of these 20-somethings go after 40-something-year-old men these days, that I think there’s a younger audience for the show.

BS: (laughs) Oh yeah, there’s that angle, too. “Should I be interested in the daddies that we have to offer on West 40s?” Definitely.

So you have the premiere tomorrow, and then what?

BS: We’ve scripted out the rest of Season One, and so we’re basically putting the pilot episode out, to start building an audience, making people aware of the show, and hopefully making some production companies or, you know, places that produce shows like this, aware, too, so that we can find the financing to shoot the rest of the season. We hope to really go into production again this fall, so this is our sort of call to the world to help us make it happen somehow.

BS: We both have really been surprised and excited by the attention that just the teaser has gotten, which is really just a minute of the first episode, and so many people have watched it, and so many people have commented about it. It’s been really great to know that people are excited to see something like this coming down the pike, and I think that’s great, ’cause, you know, when you do these things, you kind of create a show, and you just don’t know what’s going to happen with it, and now, it’s like I feel that there really is an audience out there that wants to see this, from the 24,000 views that we’ve gotten on YouTube just in a couple weeks. So it’s been very exciting to see that happening and definitely more than we expected.

MSR: Yeah it is. It is more than I expected, too, so I’m pretty excited. Brian was right! We’re a bit of a yin and yang partnership, for sure. I’m very glass-half-empty, Brian is very glass-half-full. And, more often than I care to admit, he’s turned out to be right, and that’s a great thing, because I wouldn’t bother half the time.

MSR: And it turns out it’s worth doing after all.