Netflix’s latest rom-com Sierra Burgess Is a Loser has been both praised and slammed for its commentary on social issues. While some critics found the movie progressive and body positive, others found it trite or problematic. Amidst all the discourse, one glaring problem with the movie has been totally overlooked, one that hit home for me in a nightmarish way: the lesbian jokes. The romantic comedy contains numerous malicious jokes aimed toward the LGBTQ community, but it seems to have a specific vendetta against lesbians, which made it extremely hard for me to watch or sympathize with. Sierra Burgess certainly took me back to high school, in that it reminded me what it was like to be gay bashed.

When I was in high school, being gay was categorically a bad thing. Slurs like “faggot” or “dyke” were tossed around with abandon, but the quotidian anti-gay messaging was less overt and more insidious. From a young age, it was made very clear to me that certain things were associated with lesbianism, like being too athletic, or obsessing over female celebrities, or getting too close with your female friends — and all of these things were called out constantly, vindictively, ad nauseam, as being weird and bad. 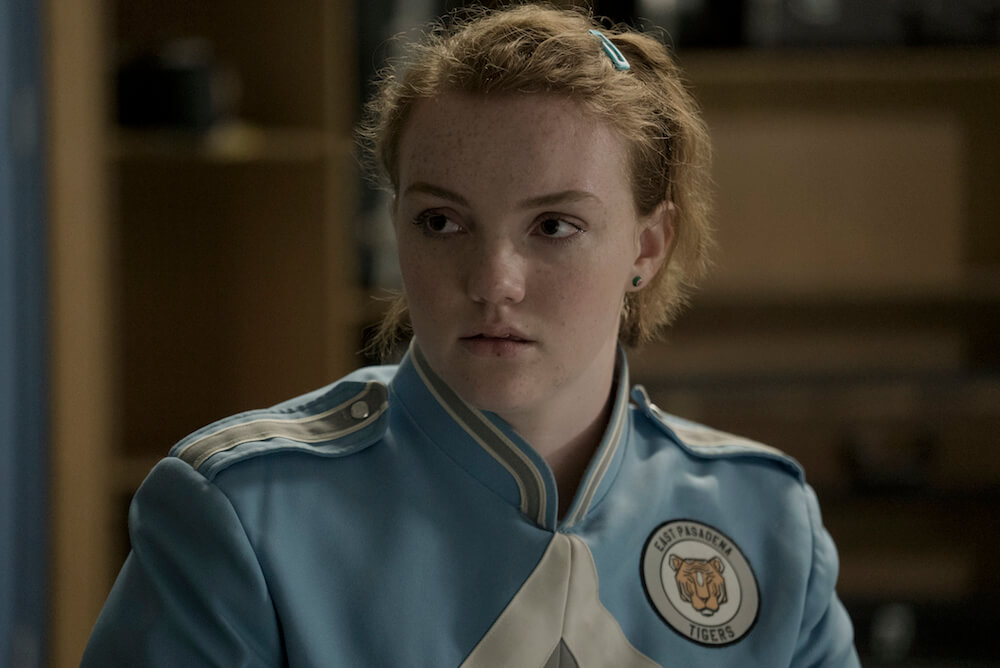 I made daily — no, momentary — active adjustments to change myself and how I communicated anything relating to women, so as not to be dubbed a lesbian. But I, along with many other girls at my school, was called this as a slur, along with “butch” and “dyke,” and there, in the narrow walls of my high school, is where I learned to feel shame. I didn’t come out until my twenties, and today, I spend most of my days battling homophobia I’ve internalized over the years as a result of such gay bashing and breaking down my own traumas that were bequeathed to me by my fellow classmates.

That sort of behavior is unsurprising, given the climate of LGBTQ representation in film and TV at the time (basically nonexistent). Gay jokes have been the bread and butter of romantic comedies throughout the history of the genre: in the ’90s and 2000s, queer people were almost invisible in rom-coms, and if we were present at all, it was to be thrown under the bus, made out to be the butt of the joke, or to drive a heterosexual protagonist’s storyline. After groundbreaking mainstream comedies like Love, Simon and Blockers were released this year, I was hopeful that things were finally changing. But things are not changing, and Sierra Burgess Is a Loser is proof of such. Regardless of its messaging on other issues, Sierra Burgess cannot be a triumph if its narrative about queer people is a homophobic one.

There is a way to make gay jokes — I would know, because I do it every day on Twitter, and I write about queerness in film and TV for a living. So, How to Make a Gay Joke 101: First, there is perspective. Is the joke being written by a queer person? Does the person penning the joke have the insight and understanding necessary in order to sympathetically satirize the queer experience? Is the joke being made at the expense of queer people? Second, if jokes are being made at a marginalized person’s expense, is there dialogue from another character or a device that contrasts with the joke in order to delineate why it’s bad? Is it made clear to the audience that this kind of joke isn’t right, but it’s a real thing that a real homophobic person would say? Or is it murky and mean-spirited?

The last thing to consider, and this is most important: If the joke is being made at the expense of queer people, then is it being used as a device that’s meant to illustrate a character’s traits? As in, if the bully character makes a gay joke, the audience is meant to assume that the bully is the bad guy and their perspective is skewed because they’re bad. If a mean girl in a movie calls her peer a “dyke” or says she has “man hands,” it can work — as long as the disses are being used to demonstrate the cruelty of her character. This is why, at first, I thought the messaging behind Sierra Burgess could work. 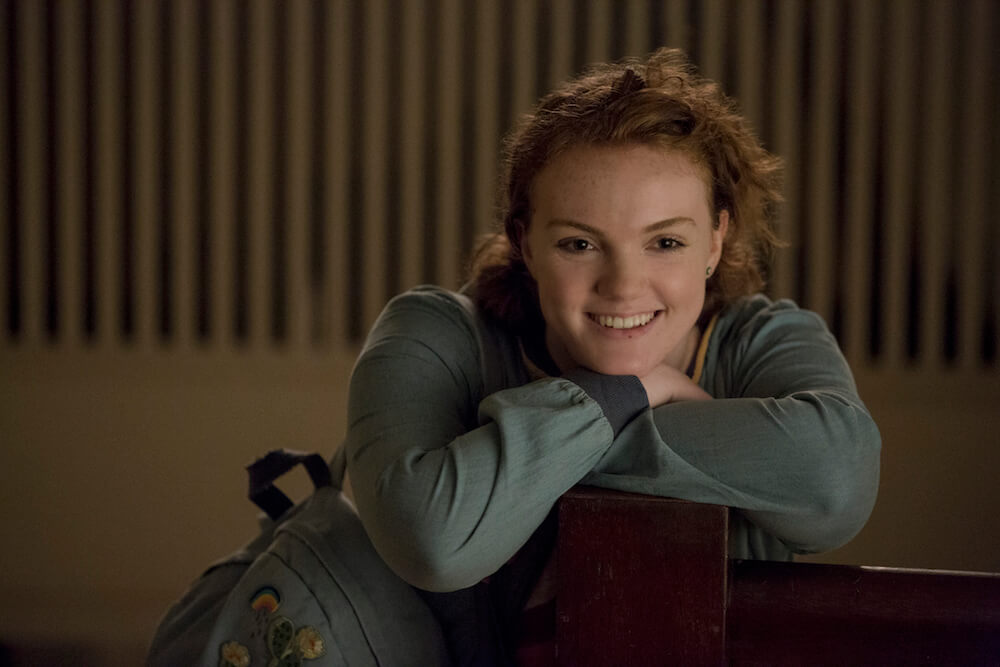 Veronica (Kristine Froseth), the stereotypically hot, bitchy queen bee of the school, is pure evil at the beginning of the film. She calls the titular character, played by Shannon Purser, awful names, one of the least vicious being the aforementioned “man hands.” So, of course, her character would also be homophobic, or fatphobic, or pass judgments on anyone who wasn’t blonde, skinny, and straight like her.

The first joke that comes at the expense of LGBTQ people is from Veronica’s minion Mackenzie, who lobs an “insult” at Sierra during class when their teacher assigns students the chance to write a poem about their lives. She tells Sierra, a cisgender girl, “Maybe yours can be about the trans experience.” Mackenzie is immediately slammed by the teacher, who retorts, “Maybe yours can be about your terrible personality.” So, the first queer joke is used to illustrate the character’s evil, and the movie corrects itself by showing that the character is patently wrong in her creeds.

But the next joke comes from Sierra — the protagonist, the one we’re meant to sympathize with, the one who is, herself, bullied. While on the phone with the boy she’s catfishing, Jamey (Noah Centineo), Sierra gets called out for having a deeper voice than she had in person (because the person Jamey met IRL was actually Veronica, who gave him Sierra’s number as a cruel joke). Sierra plays it off like she has a cold, and he says he likes the deeper voice, to which she flirtatiously replies, “Cause you’re super into dudes?” He jokes around with her, taking this quip for what it was — a gay joke. And Jamey is certainly not gay, because that would be weird and bad, so he indulges Sierra and fights back, taking the “hit.” 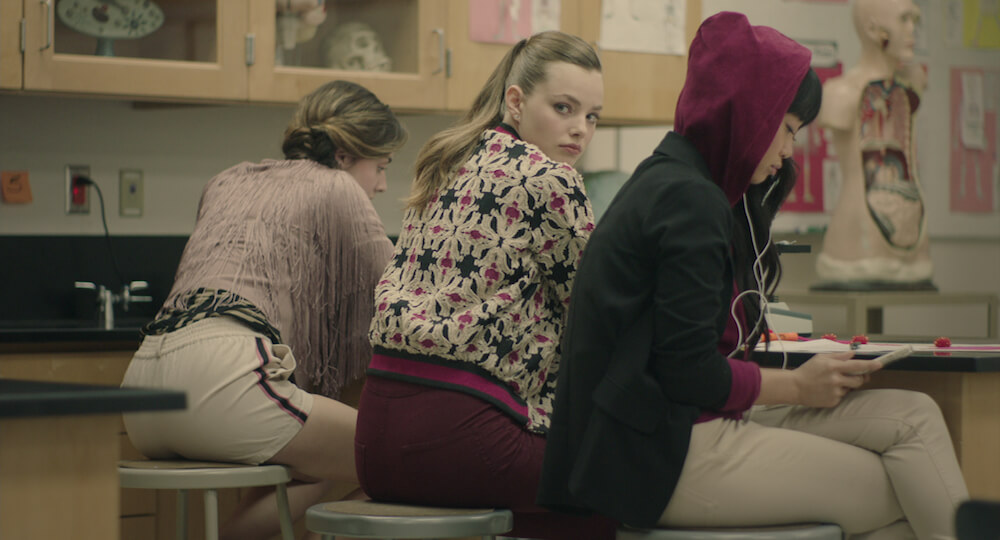 Then, the aforementioned insidious lesbian jokes begin flooding in. Veronica’s mom (Chrissy Metz), an emotionally abusive woman who is severely hard on her daughter, enters Veronica’s room while she’s studying with Sierra. Veronica decided to help Sierra catfish Jamey, in exchange for tutoring, where Sierra will make Veronica smarter for the college guy she’s chasing (great messaging here too).

Veronica’s image-obsessed mother slams her daughter for studying, saying, “That’s gonna get you far with the boys,” then looks to Sierra and gripes, “Oh, unless you’re playing for the other team now.” Sierra responds, “I’m not a lesbian,” and Veronica drives the family’s POV about queer women home, saying “She just has no taste.” Right, because all lesbians are drab, unfashionable, unattractive scum (which Sierra is not—but that’s what the line insinuates). Her mom doubles down, retorting, “Thank god, cause your father would die.”

I sat with that last line for a while, trying to examine it: Was this meant to illustrate the mom’s homophobia? I think it was, but by this point in the movie, she’s the fourth character to make a joke at the expense of queer people, and what that tells me is that it isn’t her character who has a negative outlook on queerness — it’s the movie itself.

Later, Sierra’s sexuality gets called into question again while she’s lying in bed with Veronica, and she says, “Can I ask you something?” to which Veronica immediately replies, “I’m not gonna lez out with you and Jamey if that’s what you’re asking.” Sierra replies with her own defensive homophobic quip. “Ew no,” she says, grimacing at the absurd notion that a person could be gay (which is weird and bad).

Then, Veronica retorts, “Cause I only do that at parties.” Obviously, girl-on-girl attraction isn’t a party trick, we know this. But does the screenwriter of the movie know this? These jokes are mean-spirited jabs at queer people, and they’re extremely harmful. Again, I know that they’re harmful, because I’m walking proof of the ways in which these stereotypes and jabs can have long-lasting negative effects on a person’s relationship to their own identity. 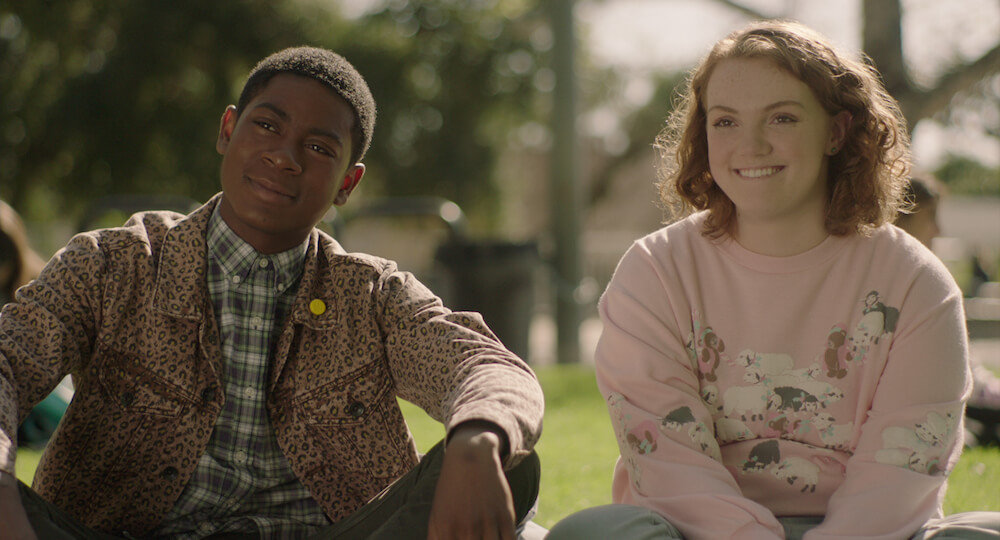 Because of the intense homophobic culture I was steeped in during high school, I still, to date, have angst around forming platonic female friendships. I was shamed for any sort of intimacy with my female friends, both physical and emotional — and Sierra Burgess Is a Loser took me right back into the depths of hell. The movie is an unsafe space where gay bashing runs rampant and no one is around to tell me, or any queer kid, that being gay isn’t a bad thing. That loving women isn’t weird. That forming emotional bonds with other girls, like the one Sierra and Veronica form, can be beautiful, no matter the nature of it. I would’ve given anything for a single person in high school to stand up for queer people and to stop making me feel othered.

I want a high school movie where two girls—or two people of the same sex—can form a bond without feeling the need to defend themselves with homophobic declarations like “I’m not gay, but…” Sierra Burgess fails to do that, and in 2018, it’s unfathomable that we’re still allowing LGBTQ people to be treated this way—both on and off-screen.