When Katie Met Cassidy is a romance set in New York City, home to many heterosexual love stories and a handful of notable same-sex ones as well. But Perri’s novel is not tortured or tinged with tragedy like so many previous lesbian stories. Instead, the two titular characters happen upon one another in a work setting and instantly find their chemistry to be undeniable, and a post-work run in is both coincidental and fateful. While Katie has always assumed herself to be straight, Cassidy’s masc-of-center swagger piques a new kind of curiosity, and their instant friendship is full of a tense connection that has Katie questioning her identity.

Perri, an out lesbian whose debut The Assistants was praised as a feminist take on The Devil Wears Prada, tells INTO she’s been wanting to write a novel addressing gender and sexuality for several years. The idea, she says, was to write a queer novel that could reach mainstream audiences.

“So that it wasn’t just left in a corner,” she says, “like it wasn’t relegated to a margin. I wanted it to break into the mainstream, and I knew that was a really challenging thing to do.”

When Katie Met Cassidy is a marker of just how far lesbian lit has come. The story of an assumed straight woman meeting a butch lesbian and the relationship not ending in death or a similarly unwelcome circumstance is a far cry from the early banned books and pulp novels lesbians were offered. There have been many more queer authors and stories published by larger presses in the last few decades, but the genre referred to as chick lit has yet to see it own bisexual- or lesbian-driven narratives. With Katie and Cassidy as alternating narrators, readers can find a way into both characters and the way they see the world, themselves, and each other.

“Depending on the personal life experience you bring to this novel, whether as a straight, cis person or as a queer person, Katie or Cassidy could be your touchstone and the book can sort of apply to you in a very different way,” Perri says. “And once I figured that out, it really cracked open for me.” 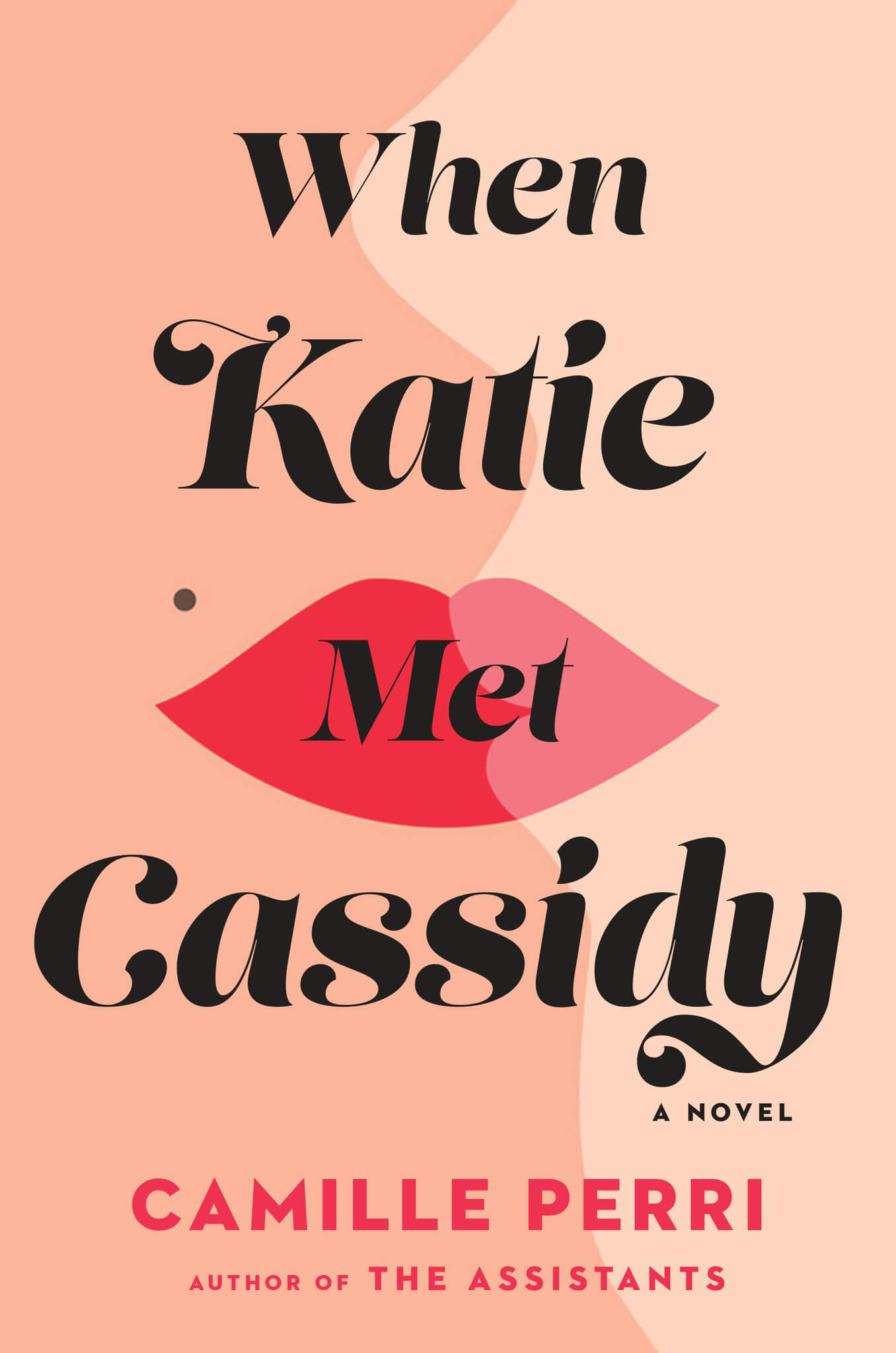 Published by the Penguin imprint G.P. Putnam’s Sons, the nude and pink cover of When Katie Met Cassidy is a close-up illustration of two women kissing. It’s non-threatening and will sit snugly between the works of Sophie Kinsella, Jennifer Weiner, and Jane Green on bookstore shelves, sure to entice a few real-life Katies into picking it up at their local Barnes & Noble.

“I wanted to pull off that magic trick where I present this book as a really fun, very traditionally plotted, conventional, romantic comedy with the twist that it’s about two women,” Perri says. “But underneath that, I really wanted to get at issues of gender and sexualities that I can kind of trojan horse in there. But for romance readers or people looking for a good beach read, they would be drawn to this cover, they would be drawn to this story, and then you’re sort of getting that other stuff as well, like gravy, you know?”

Perri isn’t afraid to have her characters fantasize and engage in some queer sex. Katie’s desires arise in a way that challenges her perception of what she wants and who she is, while Cassidy’s deviate from her lifestyle of random hook-ups and eschewing of commitment altogether. They both have moments of coming forth as the aggressor; the one who acknowledges the wanting of the other. This is important, as were it only Cassidy seeking out Katie, she would ultimately seem like the predatory lesbian displayed too often in works of fiction; an off-putting caricature instead of a flawed human being who happens to move through the world as an androgynous gay woman.

“I wanted it to be as much about love as it was about sex, and as much about the magnetism you feel for another person as it was about sex, but of course I wanted sex in there, too,” Perri says. “What I didn’t want was for the book to have sex in it that came off as titillating in some way or cheap. It was important for me for this book to have a certain level of dignity to it and to represent a love story that is essentially a queer love story that was clearly from a queer gaze. … This book was not going to come out sounding like something that a straight, cis white man wrote, you know?”

Another facet queer readers will appreciate in When Katie Met Cassidy is the lesbian bar Cassidy and her friends frequent. Referred to as Metropolis in the book, the bar was based on the gay Brooklyn bar Metropolitan as well as other lesbian-focused spaces Perri used to frequent.

“Like Meow Mix, the Hole, Cattyshack–they’ve all disappeared,” she says. “So Metropolis itself is sort of this spirit of all of those places together in one bar. But yeah, there’s a lot of Metropolitan in there. I spent a lot of years hanging out at those Metropolitan barbeques on Sundays and Ladies Nights, Wednesday nights at the Met for years. That was sort of my home.”

Cassidy invites Katie into her space in a way that is surely new to the chick lit genre. Inside Metropolis, Katie is introduced to a variety of queer women and the specific way they relate to each other; the incestuous inner-workings of a marginalized community whose relationships are often fraught with personal histories that overlap with other friends, exes, partners, and peers. Katie is at once fascinated and fearful, a feeling not unlike those felt by other baby dykes finding themselves for the first time among a sea of convening lesbians.

“I think bar culture is really, really significant to queer culture in a way that the straight world might not really understand, because these bars serve as community centers as much as they do as a place to get drink and dance and make bad decisions,” Perri says. “It’s also where the first time you come into a new city or the first time you’re maybe stepping into a queer space, you are suddenly surrounded by people hopefully who look like you and who feel like you and who you feel safe around and a lot of places, especially in New York, those bars are filled with people who have come from other places who have either been rejected or abandoned or not loved, not accepted, not celebrated.”

For Perri, the bar also reflects a very important part of Cassidy as a masc-of-center lesbian; it’s a place in which she is not just comfortable being who she is, but lusted after, too.

“I’ll never forget my first experiences stepping foot into lesbian bars and queer spaces and just feeling for the first time, ‘Oh, I’m hot here,'” Perri says. “Like, the definition of what sexy and hot is is different because you can be butch or you can be femme or you can be gender neutral or you can be whatever. Anything. Your body type can be a million different ways and you are still hot in that space, you are still accepted in that space, because it is just a complete paradigm shift from what you experience in straight white culture.”

Perri says it’s been both pleasing and surprising to see how many mainstream outlets are giving the book positive attention. It being published during Pride month certainly doesn’t hurt, but also, Perri was successful at queering the canon of chick lit while making the book accessible and pleasurable for a broad audience without sacrificing or apologizing for anything, especially Cassidy and the way she inhabits herself and her surroundings. She’s not treated preciously; she gets the same treatment, Perri says, as any male love interest would in a similar novel.

“I purposely wanted to leave all of my gender and sexuality studies terminology out of it because I really, really wanted people to be able to come to this without any background knowledge at all about gender and sexuality,” Perri says. “Cassidy, for me, is a character that I created because I have never yet been able to find that character in something that I consumed. Whether in a book or on screen, someone who is very, very confident. She is masculine presenting, really does reject a lot of the conventions of femininity and in this way, she sort of takes on the role as the traditional male hero of a romantic comedy.”

Cassidy exhibits that same kind of playboy behavior often attributed to fuckboys of any gender (see: Shane from The L Word), but her redeeming qualities are not just that she can change her ways for the right woman, but that she, like anyone else, can see opportunities for personal growth.

“She definitely displays bad behavior and she’s sort of wild and she’s promiscuous,” Perri says, “but there’s a realness to her and a softness to her heart. I really, really just hope that queers out there who like me have been like waiting for a character like Cassidy to show up will be able to sympathize with her and empathize with her and hopefully feel like they have been represented.”

“This is a romantic comedy for us, ” Perri continues, “and we deserve a happy ending just like anybody else.”