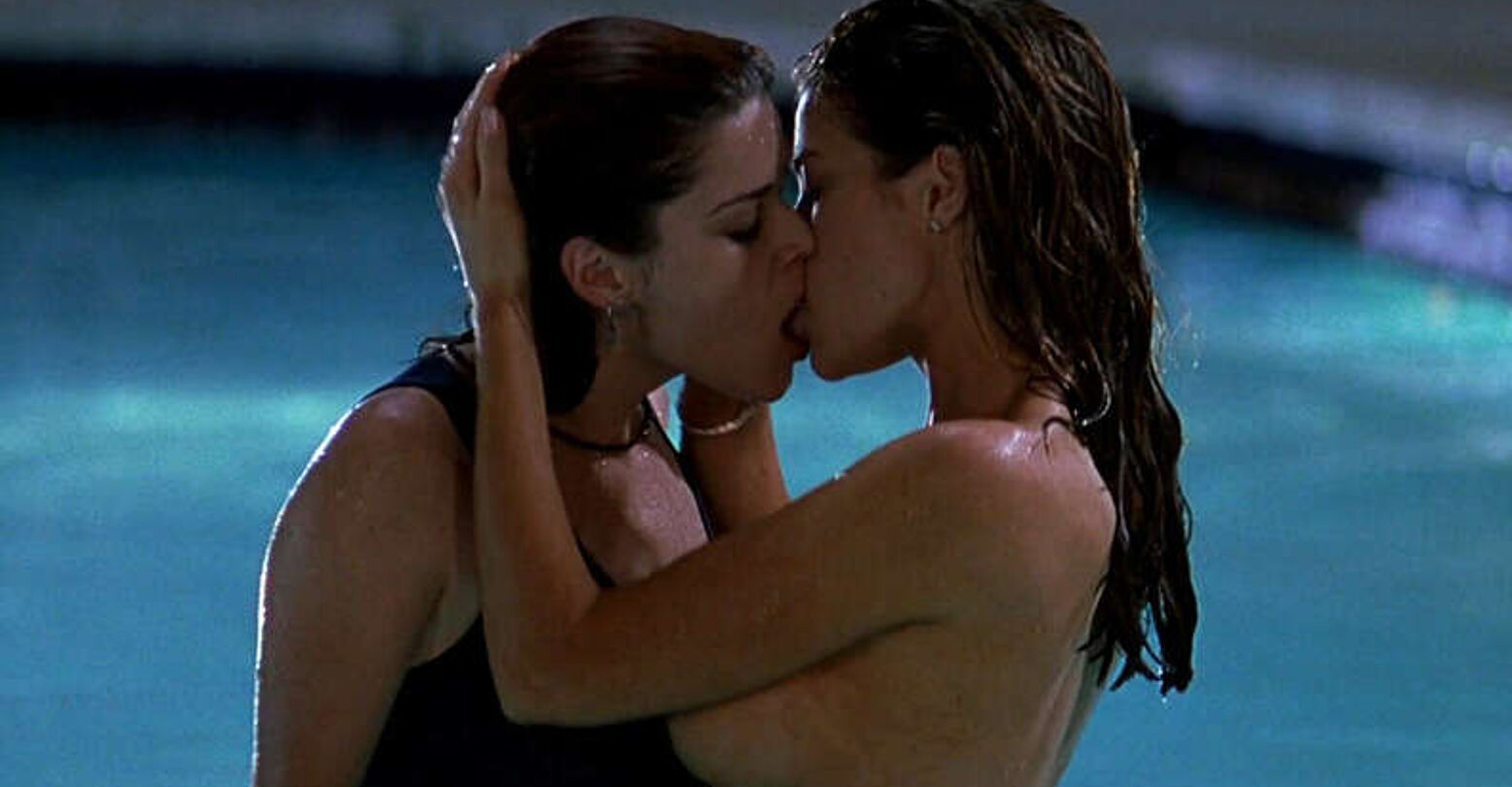 The ’90s delivered some of the best and worst of lesbian cinema. But in a time of Blockbuster and home videos, mainstream movies with any semblance of lesbian or bisexual themes tended to fall into the latter. In 1998, one such offering was Wild Things.

But the difference is that Wild Things is perhaps one of the most well-recognized mainstream films about queer women, and for a time, it felt like all some of us had. Rewatching Wild Things 20 years after its salacious debut is an exercise in gratitude. Wild Things is the male gaze, and unapologetically so. Four years earlier, director John McNaughton (famous for his X-rated Henry: Portrait of a Serial Killer) was behind Girls in Prison, starring Ione Sky and Anne Heche. So when McNaughton’s camera lingers on the torsos and lower halves of the women in Wild Things as they wash cars while scantily clad in all-white, or start ferociously french kissing at the insistence of Matt Dillon, it doesn’t feel gayit feels gross. 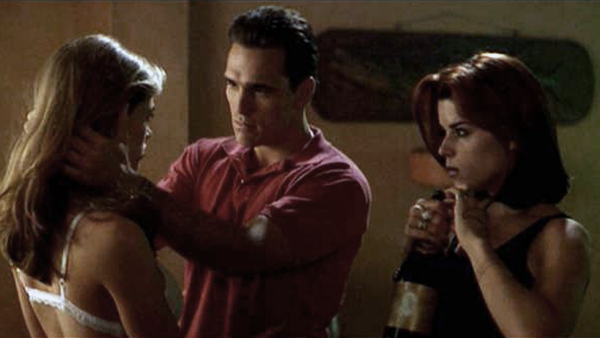 Still, in 1998, I understand why lesbians would hit pause and rewind on these kinds of softcore porn-esque scenes. No one watching Wild Things for the story. However, that storyline seems to be the most timely thing about the film.

In case it’s been a while (it had for me): Matt Dillon plays Sam Lombardo, the womanizing guidance counselor at a ritzy Florida high school. Denise Richards Kelly Van Ryan, is the daughter of prominent socialite who has, at some point, slept with Mr. Lombardo. Neve Campbell is Suzie Toller, a poor weed-smoking bad girl who lives in a trailer park with her family and their pet alligator. At the beginning of the film, it appears that Kelly is pursuing a sexual relationship with Mr. Lombardo, but that he is somewhat resistant. They spend some time together in his house, though, and Kelly is soon telling her mother she’s been raped. Then Suzie also tells the police Mr. Lombardo raped her, and the case fast tracks to trial, where on the stand, Suzie says Kelly asked her to lie and neither of them were ever raped. Mr. Lombardo receives millions of dollars for having his name dragged through the mudbut it turns out, Kelly and Suzie were in on it the whole time. They are supposedly going to split the moneybut first, they all have sex to celebrate. Later, Mr. Lombardo kills Suzie, but is secretly working with Police Detective Ray Duquette (Kevin Bacon) to make sure Kelly doesn’t talk, either. But Duquette kills Kelly, and then Lombardo kills him, and then it turns out Suzie isn’t dead at all! It was a ruse! And she kills Lombardo and takes off with the millions, never to be poor again.

There are so many things that are troubling about Wild Thingsnamely that the story was about two women who knowingly cried rape and didn’t care that it would forever affect millions of other women who would be questioned because of itbut also the fucked up, largely rave reviews (from mostly male critics, of course) the film received. They weren’t praising the plot, though.

Some choice quotes from major publications:

Entertainment Weekly gave Wild Things a B, dealing how unfuckable he thinks Neve Campbell is (“grunged-out, bad-dye-job, druggie-dysfunctional rebel loser”) and how he’d prefer to bed Denise Richards (“an heiress with the pouty lips of a party doll and an attitude of brazen do-me recklessness that leads her to compete with her bored-slut mother”). HER “BORED-SLUT” MOTHER. He goes on to write that by Kelly flirting with Mr. Lombardo, “clad in one of a series of soaked-to-the-skin outfits, [she] just about rapes him.”

All this time lesbians were watching Wild Things for the same reason men were, but thinking much differently about it. Of course women oogled Denise Richards and Neve Campbell, and the gratuitousness was apparent, but at the time, we could only find the benefits in a film that didn’t shame the women for being bisexual. Yes, they were criminals and liars and killers (at least one of them, anyway), but they were ours.

Except they weren’t. Because straight dudes were getting off to the same scenes that we wereand as Neve Campbell said in an interview last year, men won’t stop asking her how it was to shoot that scene. (“Good,” she said with an eye roll. “It was good.”)

“Men love to see two women together,” Denise Richards told EW in 1998, asking the male reporter, ‘Why is that? Explain it to me.’”

In that same piece, director McNaughton says: “Denise came in for her first audition and was good, but not so good we had to hire her. But when she came back for a second audition, she was a lot better. She’d obviously thought about the character, which we took as a good sign that she could do the role. …if worse came to worst, we knew she’d be beautiful.” 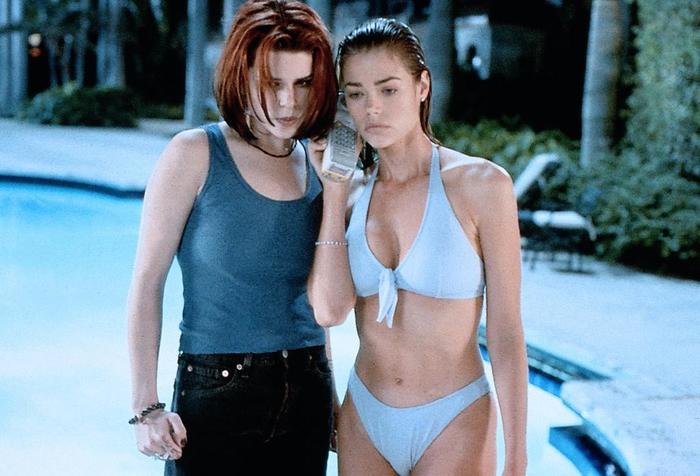 Wild Things was a step back from Bound, which gave its two queer women leads a romance that existed outside of champagne-soaked sex, and a relationship outside of a man. At the time, we were willing to accept the basic validation of major actresses agreeing to make out on screen, and people saying it was worth seeing.

But 20 years later, it doesn’t hold the same significance, outside of perhaps a nostalgic willingness to forget the more problematic elements and the fact that it simply wasn’t meant for us. (They even cut a scene where Kevin Bacon and Matt Dillon were making out in the shower, so any intention of making it full-on queer were forfeited for the sake of keeping straight male viewers turned on.)

Arguably, a queer woman ends up winning Wild Things, and Neve Campbell can keep her status as a queer icon. So maybe there is a kind of heroic happiness we can find in its end. But mostly, rewatching it made me so happy with how far we’ve come from the crumbs we used to get tossed because men were all-too-excited to see two women kiss on the big screen.