Although super soldiers and thunder gods fight to protect humanity in the Marvel Universe, a huge part of mankind remains mysteriously absent in the movies, and no, it’s not because Thanos disintegrated half of the population in Avengers: Infinity War.

While Marvel has begun to diversify on TV, introducing queer characters like Karolina Dean in Runaways and Jeri Hogarth in Jessica Jones, the Marvel movies are nowhere near as inclusive. Heroic strides have been made with films like Black Panther and the upcoming movie Captain Marvel, but LGBTQ characters from the studio have still yet to appear on the big screen.

James Gunn once teased that queer characters already exist in the Marvel universe, explaining to The Guardian that “We just don’t know who they are yet.” Since then, studio head Kevin Feige finally confirmed this to be true, telling The Playlist that more than one LGBTQ character will soon appear in the movies, at least one of whom is someone that audiences are already familiar with.

The movie rights of many queer heroes in Marvel comics are currently tied up with Fox due to their affiliation with the X-Men, but there are still plenty of characters who could be incorporated into the Marvel universe, so join us as we count down some of the most likely contenders to quite literally fly that rainbow flag on screen.

She’s bi. And yes, she cares very little about what men think of her. What a joy to play! https://t.co/d0LZKTHCfL

When it comes to the Marvel heroes that we’ve already met on screen, Valkyrie is easily the most likely candidate to find same-sex love. After all, Tessa Thompson already revealed that her character is bisexual, just like she is in real life. Valkyrie’s sexual orientation was almost made canon in her film debut, Thor: Ragnarok, but the scene in question was cut from the theatrical version. However, now that we know for sure that she escaped the wrath of Thanos and his dreaded finger snap, it’s likely that Feige and Co. will officially sire Valkyrie as the first queer hero in the Marvel universe.

Yes, Loki seemingly died for the umpteenth time at the beginning of Avengers: Infinity War, but this isn’t the first time that the God of Mischief has tricked audiences. Although actor Tom Hiddleston seemed to confirm that the fan-favorite character has appeared on screen for the last time, explaining that this final scene “closes the whole journey of Loki,” Marvel Studios is also trying to make us believe that the likes of Spider-Man and Black Panther died too, despite the fact that both are set to star in upcoming movies. Set photos reveal that Tom Hiddleston shot new flashback scenes too, which suggest that Avengers 4 will involve some time travel trickery. If that’s the case, then perhaps Marvel will finally reveal Loki to be the bisexual, genderfluid villain we know and love from the comics.

In the pages of Marvel comics, no women are fiercer than the Dora Milaje who guard Wakanda with their lives. Just recently, two members of this royal guard called Aneka & Ayo entered a relationship together, which became a hit with fans. Before the release of Black Panther, rumors hinted that Danai Gurira’s character, Okoye, would flirt with the on-screen incarnation of Ayo (Florence Kasumba), bringing this story to life on screen, but the scene in question was unfortunately scratched out of the final cut. Even though Okoye is married to a man in the film, future installments of the Black Panther franchise could potentially explore the sexuality of Ayo and perhaps even Aneka too. 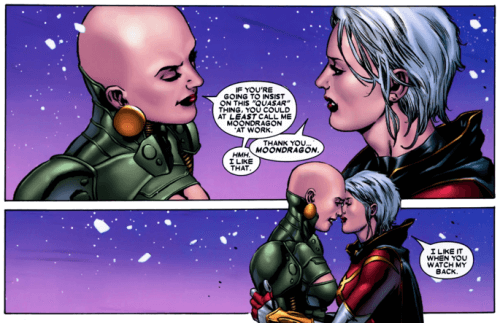 The tragic story of Drax the Destroyer revolves around the death of his family, but in the comics, his daughter didn’t die and instead grew up to become a superhero called Moondragon. The bisexual telepath and martial artist has been affiliated with both the Avengers and the Guardians of the Galaxy in the past, so it wouldn’t be too tricky to incorporate her into future chapters of either franchise. After all, life and death are interchangeable when it comes to the Marvel universe.

As a friend to both Drax and Carol Danvers, Phyla-Vell could easily make her debut in either Guardians of the Galaxy 3 or the Captain Marvel movie, bringing her energy-based powers to the fray. More importantly, though, Phyla-Vell has also dated Moondragon in the past, too, so Marvel could go one step further and introduce them both together as the studio’s first lesbian couple on screen. 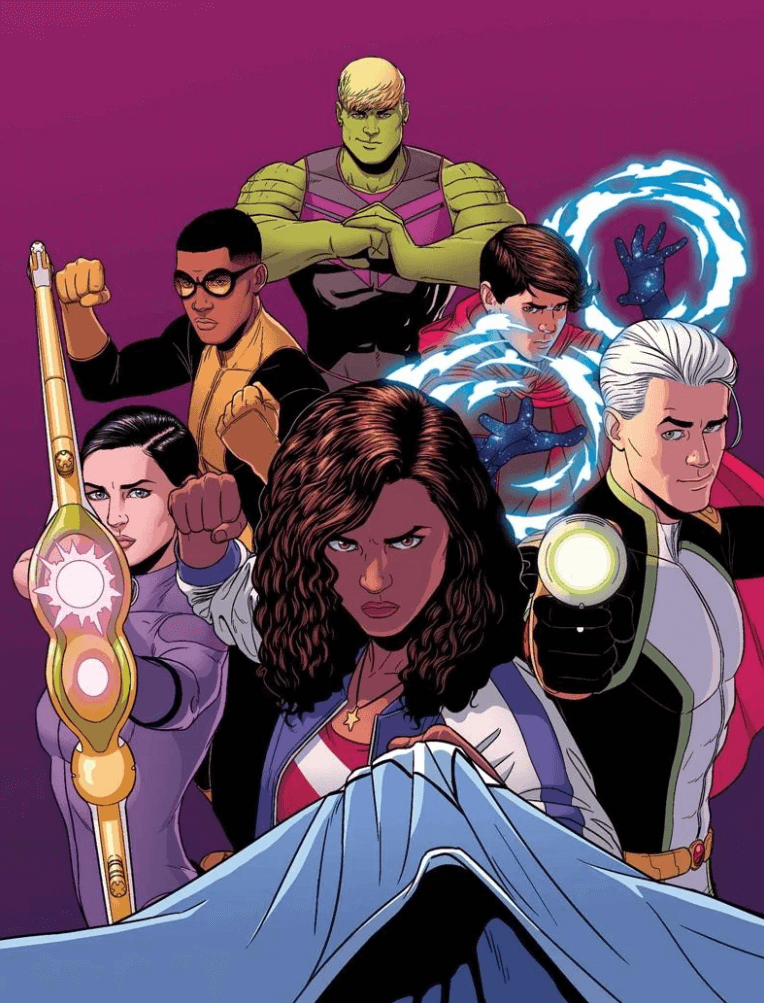 Kevin Feige previously discussed the possibility of introducing a new super team called the Young Avengers who could replace the current roster once contracts expire. For those not in the know, this group is among the queerest to ever appear in Marvel comics. The gay love story of Wiccan and Hulkling is a particular fan favorite, but their convoluted links to heroes already established in the MCU might have to be altered somewhat to fit into the movie’s continuity. Failing that, Miss America would also make a strong addition to the Marvel Universe, representing the queer Latina demographic while kicking ass along the way.