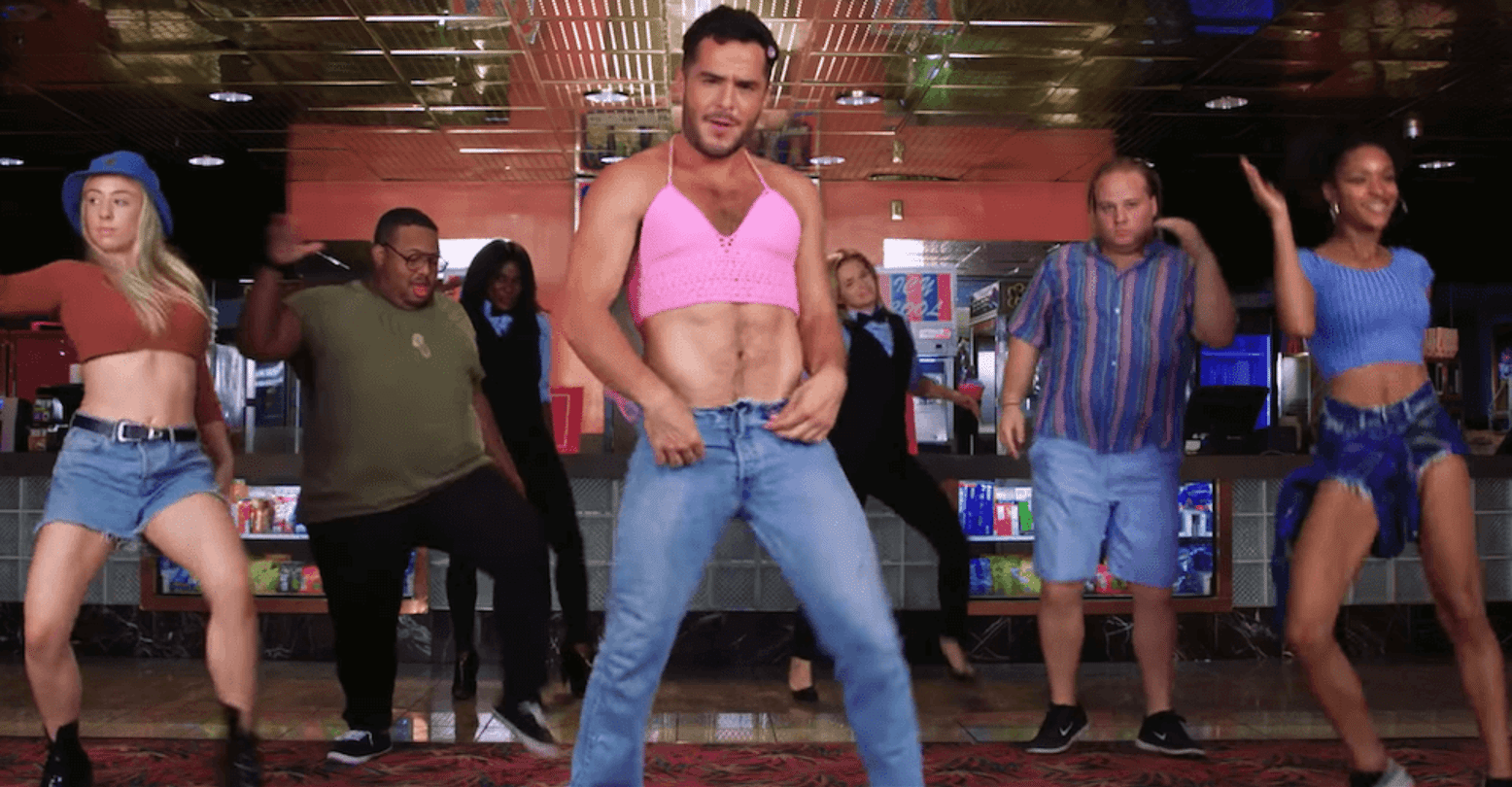 If you stay girly, you don’t need to get girly.

If you’ve seen the new video “Girly” by gay singer John Duff, the most eye-catching presence in the visual, an ode to Mariah Carey’s iconic “Heartbreaker” video, sits right below the knit tube top that Duff sports just as Carey did in the original. It’s his six pack, sandwiched between the pink top and cutoff denim.

The song, an ode to getting girly behind closed doors, is mostly innocuous. But when paired with the video featuring Duff’s buff washboard abs, the song and video combination speak to a larger media trend, in which more mainstream desirable men perform femininity while displaying normative thirst-worthy bodies that undercut their ultimate message.

Duff’s “Girly” comes on the heels of an onslaught of viral Pride month videos featuring So You Think You Can Dance alum Mark Kanemura performing elaborate rainbow-soaked wig and outfit reveals, each choreographed to Carly Rae Jepsen’s “Cut to the Feeling.” In the videos, Kanemura sashays and twirls in nothing but a wig and underwear, putting his chiseled body on full display.

Both Duff and Kanemura put forward the idea that femininity is for everyone. That just because someone looks typically masculine, doesn’t mean they identify with or exhibit masculinity. But, they also display femininity from the safety of their normative, muscular bodies. To the casual viewer, their femininity is ephemeral. When Duff says you can “get girly,” the logical conclusion is that “girly” is a temporary destination, one that he can code switch in and out of when it suits him. But for the rest of us who remain unchiseled — especially fat people — our femininity is often not the kind that is celebrated. We are given less leeway to display femininity publicly and proudly.

In the book Fat Gay Men, Pace University professor Jason Whitesel writes that fat bodies are often gendered and that due to misogyny among gay men, “fat amounts to degradable femininity.”

“Fat feminizes male features, threatening masculinity and departing from the archetype of the disciplined hard body,” Whitesel adds. What follows is a vicious cycle: our bodies are not read as hot by mainstream standards and they are also read as feminine. The two then become intimately linked, hence the staying power of the couplet “no fats, no fems” on hookup apps. Additionally, fat bodies are often thought of as undisciplined, unruly and unwieldy. We’re perceived as lacking the self-control, desire or self-worth to “take care of our bodies” — a popular phrase on hookup apps — and head to the gym or curb our calorie intakes.

In reality, thirst acts as a protective sheath against the actual vitriol and disgust that comes with acting feminine. More than just protecting people, thirst can often up people’s profiles. There’s a reason Kanemura was asked to join Carly Rae Jepsen on stage at Outside Lands. Would that same invite had been extended if thirst for Kanemura hadn’t propelled his video to virality?

Thirst protects people like Kanemura, Duff and even stars like Nico Tortorella against slander for acting “too gay.” We saw this play out in real time earlier this year when RuPaul’s Drag Race contestant Kameron Michaels became one of the most thirsted-after queens in the show’s history. Outlets wrote entire posts celebrating her as the “thirst trap” of Season 10, celebrating her not because of her drag but because of hours clocked at the gym.

When it comes to Kameron, I’ve written about my own complicated relationship with her popularity. In the thirst for Michaels, I saw a complete split between Michaels the persona and Dane Young, the person. Thirst for her, as I wrote at the time, “reified and buttressed long-held, pervasive ideas in the queer community that white, buff, masculine men were the pinnacle and that everyone else was simply, well, fat that needed to be cut off the meat.”

Michaels eventually spoke on the show about her trouble being emotional and vulnerable.

“I’m just a lot like my dad and he never showed any weak emotions,” Michaels said, crying to Eureka during an episode of Untucked. “I think emotions are weak. They don’t do anything for you so I don’t usually deal with them.”

I recognize that if I can extend sympathies to Michaels and his own struggles with softness, I can extend them to Duff, Kanemura, and Tortorella, as well. So many queer men are still negotiating their own attraction to and fascination with femininity while also reckoning with their own trauma around perceived femininity from being queer. I hope that we can simultaneously celebrate their journey with masculinity while recognizing that those with perfect bodies may also perpetuate a form of body fascism that marginalizes those of us with larger waistlines.