Ten years ago today, Britney Spears personified the Hollywood train wreck cliché. The photo of her bald-headed, swinging an umbrella at a paparazzi goes down as one of the darkest moments in pop culture historyand gave us the mantra: “If Britney can make it through 2007”.

But unlike other troubled starlets of that eraParis Hilton, Tara Reid, and Lindsay LohanSpears somehow managed to go triple platinum in the throes of her meltdown.

During the fall of 2007, she released Blackout, an album that foreshadowed an entire era of conceptual pop and electronic dance music but was ultimately obscured by her antics. From its clever use of auto-tune to its weaving of tabloid narratives into club anthems, Blackout showcased an artist relishing in darkness.

Though it’s ambiguous whether Spears had artistic control, her album was uniquely powerful, demonstrating the paradoxical beauty of the pop industry. 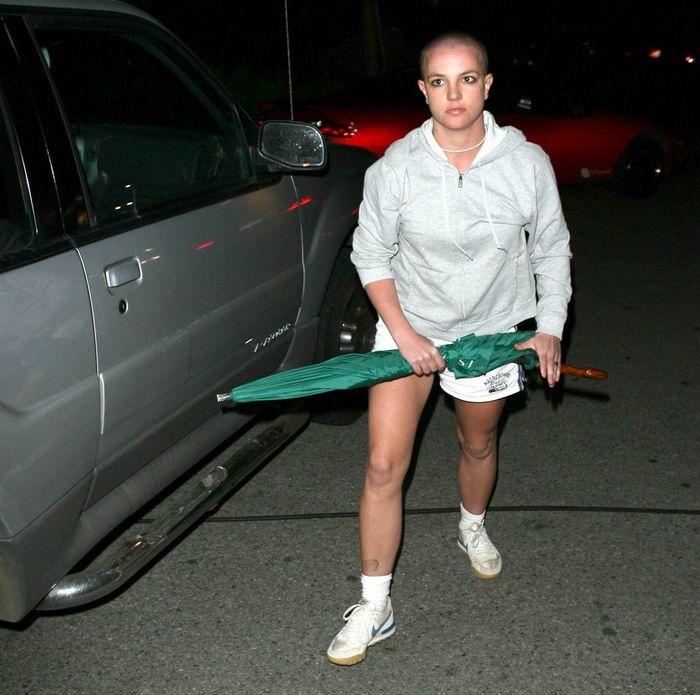 The cover for Blackout sums up the messiness of that era. Spears is wearing a black wig and a white leather hat, awkwardly posing in front of what can only be described as a Photoshop rendering of a K-Hole.

Her infamous 2007 Video Music Awards appearance was equally as disastrous. For the majority of her performance of “Gimme More,” she barely danced and lazily lip-synced along to a backtrack. By the time the third single off the album,“Break The Ice,” was released, she was completely checked out. Britney opted to have an anime character stand in for herin the song’s music video.

Within the span of a few months, the pop princess shaved her head, lost custody of her kids, was in and out of rehab, got divorced, and ended up in a psychiatric ward. Clearly, she had other concerns.

And what makes Blackout so fascinating is this spectacle of witnessing a pop star go on autopilot and have everyone around her compensate with elaborate smoke and mirrors. At the time, Pitchfork said in a glowing review, “Blackout is a masterclass in autotune and vocal treatment as a studio instrument.”

Danja and Bloodshy & Avant the main producers of the album used Britney’s voice to make their presence as studio technicians well known. In the lead single “Gimme More,” her voice jumps from deep to robotic to raspy all over the course of repeating a brilliantly simple chorus: Gimme more / gimme gimme more.

The song is peppered with Britney eerily narrating her thoughts. “I just want more!” She demands at the song’s climax. 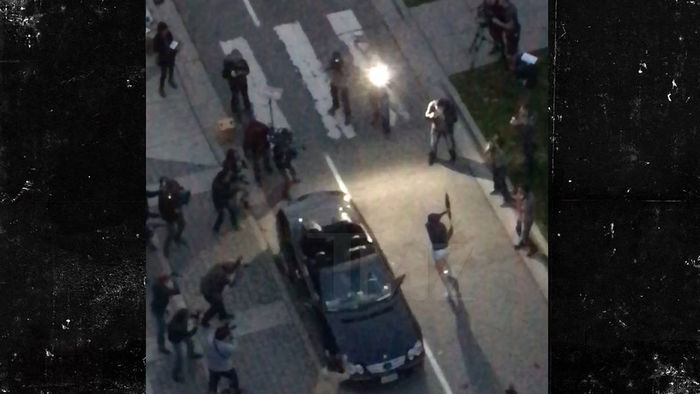 Even though it was marketed as Top 40, these weird, electronic flourishes turned Blackout into something more conceptualan album that openly celebrates the mechanical process of creating pop music.

But while some may think all of this chaos around Spears was due to her being unaware of it all, that is exactly the opposite of what was happening. Her self-awareness is illustrated by the album’s lyrics.

On “Piece of Me,” Spears addresses her controversies head-on. She labels herself “Miss Bad Media Karma,” jokes about sneaking “away to the Philippines,” and mocks the public by exclaiming: “Oh my God, that Britney’s shameless!” In Blackout fashion, her voice gets heavily autotuned when she asks her audience, “Do you want a piece of me?”

Meanwhile, “Gimme More” turns the media’s obsession with her into an innuendo for sexual voyeurism: “Cameras are flashin’ / while we’re dirty dancin’ /they keep watching.”

These nods to Spears’ personal life accomplish what great pop doesrepackage authentic experiences and emotions into something fun. 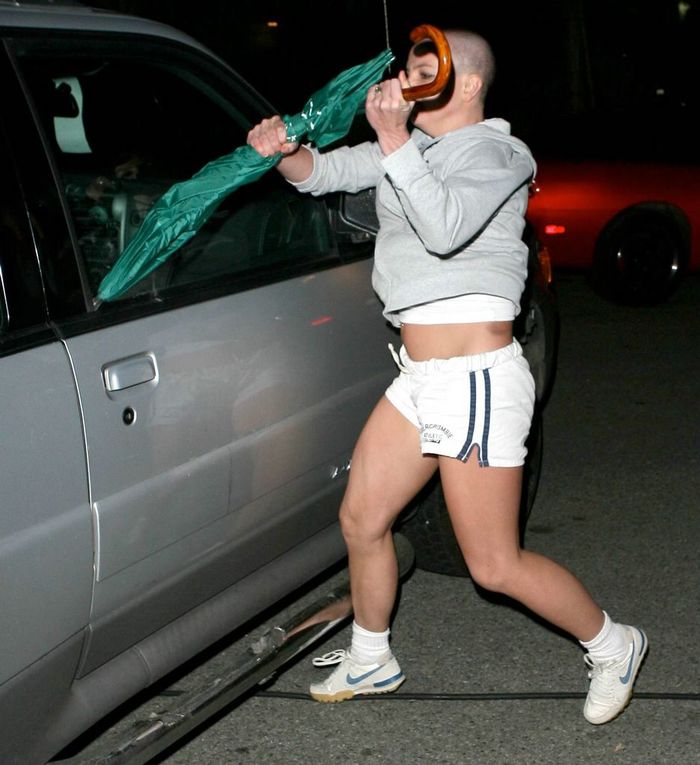 Also unlike Spears’ other releases, Blackout didn’t have an accompanying global tour or an elaborate roll out.

The following year, Spears returned with Circus, a “comeback” album that harkened back to her “Toxic” era. In the music video for the lead single “Womanizer,” she abandoned Blackout’s self-referential content for a sexy, almost comedic storyline of a woman repeatedly disguising herself to stalk an unfaithful boyfriend.

And ironically enough, just when Spears moved on from Blackout, its influence began permeating the zeitgeist. The same month that Circus came out, Lady Gaga released her debut album The Fame.

A singer-songwriter well-versed in theater and performance art, Gaga approached her ascent up the charts as a conceptual project. To become famous, Gaga dyed her hair Britney blonde and began singing electro-pop songs about extremely Blackout-esque themes: overexposure, materialism, and sexual ambiguity.

In songs like “Poker Face,” at the hands of producer RedOne, Gaga’s voice was transformed into a rhythmic, thumping instrument. While Blackout captured and commodified a celebrity’s actual downward spiral, The Fame turned a star’s rise and fall into a camp performance.

At her 2009 VMA performance of “Paparazzi,” Gaga staged her own untimely death. Hanging in front of an audience as blood dripped down her body, she wrote the last chapter to Blackout’s implicit, dark story.

After Gaga’s success, her contemporaries were quick to copy her eccentric aesthetic, vocal effects, and electro-pop dance beats. A Google search for “Lady Gaga’s Influence” results in dozens of memes comparing and contrasting what musicians like Nicki Minaj, Rihanna, Beyonce, and Katy Perry looked like before and after Gaga’s rise.

Blackout was not only overshadowed by Spears’ antics but everything it influenced, becoming a cult classic that’s upheld by fans and critics alike but largely overlooked as a pop cultural catalyst.

Last August, ten years after Spears’ disastrous VMA performance, Taylor Swift released “Look What You Made Me Do.” Behind a brash, electronic beat, Swift robotically sings about her scandals, larger than life tabloid persona, and reputation. Instead of truly going off the rails, however, the song feels forced and lacks the charisma of “Piece of Me. 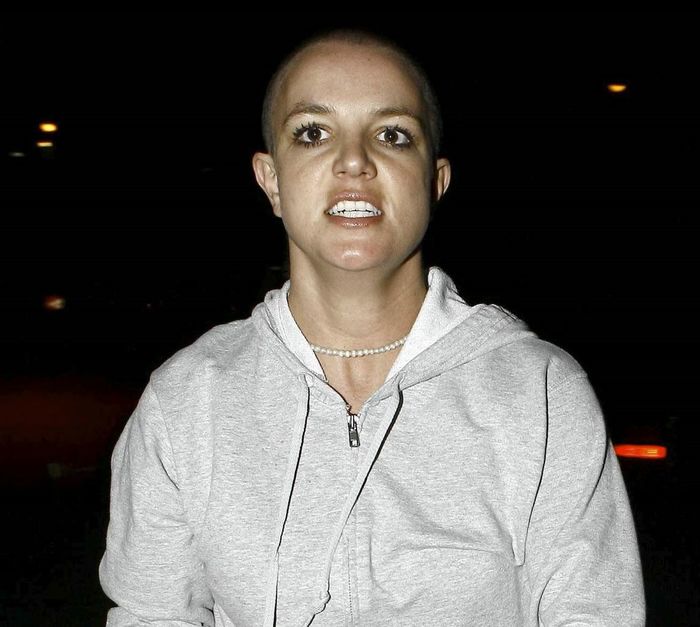 For a piece in The Fader revisiting Blackout, Spears said, “The magic of Blackout was actually pretty simple. It just wasn’t so thought out. I just did what I felt and it worked.”

A memorable piece of pop music has an inscrutable quality that separates it from the scores of other artists clawing for your attention. All the mechanisms to make standard Top 40 music were in place, and yet because of an equally tragic and majestic error, something dark and artful came out of the pop factory.

Though 10 years later, Spears still sings songs from the album at her multi-million dollar Las Vegas residency, her post-Blackout material has stuck to the old formula, pretty much closing this window into her id forever.