The Trump-era of Republican politics has been an exercise in laying bare the agenda of the GOP. The Right’s goals have long been shrouded in euphemisms and dog whistles in the name of maintaining an appearance of civility. But Donald Trump’s influence has brought the party’s deep-seated white nationalist tendencies out into the open, unmasking the GOP’s disregard for the wellbeing of anyone but their donors.

Now the fiasco of a race to fill Attorney General Jeff Sessions’ vacated Senate seat has uncovered something the LGBTQ community has suspected for years: Pushing us out of public life is a core tenet of the Republican Party.

Later this month, Alabama voters will choose between Republican anti-LGBTQ bigot Roy Moore and Democratic former Attorney Doug Jones to represent them in Congress. Moore looked to be cruising to an easy win. But in recent weeks, many of Moore’s supporters have backed away from him following numerous accusations he engaged in sexual relationships with underage girls. (President Trump, meanwhile, appears to still support him.)

It’s both remarkable and revolting how much conservatives were willing to put up with from Moore before they abandoned ship. Moore’s history of attacks on LGBTQ people is as lengthy as it is extreme.

When he was an Alabama circuit court judge in the 1990s he had to be removed from a custody case involving a lesbian mother because his homophobic views interfered with his ability to hear the case impartially. Moore attempted to block the woman from unsupervised visitation with her children, claiming her children would be “detrimentally affected by [her] present lifestyle.” 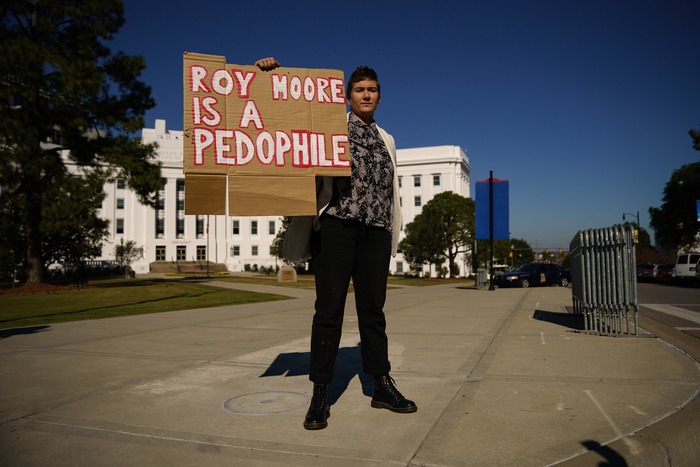 In another child-custody case in 2002, Moore wrote in an opinion that “homosexual conduct is, and has been, considered abhorrent, immoral, detestable, a crime against nature.”

In 2005, Moore publicly advocated that homosexuality be criminalized and referred to it as “the same thing” as bestiality. When he asked whether he thought gay people should be executed, Moore couldn’t give an answer.

In 2006, Moore penned an op-ed opposing the appointment Mark Dybul to U.S. Global AIDS Coordinator, because he was an “admitted homosexual.” Moore has also stated that the Obergefell v Hodges decision, which legalized same-sex marriage in the U.S., was worse than Dred Scott. That ruling enshrined the status of African-Americans as slaves and property to be owned. Moore has claimed that the the 9/11 attack was a punishment for the U.S. “legalizing sodomy” and argued earlier this year that “transgenders don’t have rights.”

Despite this, many Republicans fell in line and endorsed Moore after he won the GOP primary. Sen. Majority Whip John Cornyn called Moore “a tireless advocate led by principle rather than politics.” Texas Senator Ted Cruz praised the notoriously anti-LGBTQ figure for “the courage of his convictions,” while fellow presidential also-ran Rand Paul lauded how Moore “spent a lifetime defending and standing up for the Constitution.”

Despite the heaps of praise from congressional Republicans, Moore’s record is hardly exemplary. Contrary to his constant grousing about his love for the U.S. Constitution, Moore has established that he has zero regard for the rule of law.

Moore was famously removed as Chief Justice of the Alabama Supreme Court twice. In the first instance, Moore refused to comply with a federal court order demanding the removal of an monument of the Ten Commandments from the lawn of the courthouse. Eight years later, Moore was again elected to the same post but was removed for the second time in 2016 for ordering lower court officials to refuse to issue marriage licenses to same-sex couples in opposition to the Obergefell decision.

Although Moore is one of the most clear examples of the GOP’s willingness to tolerate extremist bigots, he is far from the only anti-LGBTQ zealot to get a pass until the very last moment.

Republicans used Milo Yiannopoulosa gay man known for his white supremacy, attacks on feminists, and harassment of trans peopleas the poster boy for the so-called “alt-right” for years before his public support for pedophilia made him a pariah. One-time Fox News host Bill O’Reilly was provided a platform to express deeply bigoted views on LGBTQ people until he was caught up in a sexual harassment scandal earlier this year. O’Reilly once compared opponents of so-called “religious freedom” bills targeting the LGBTQ community to terrorists.

Oklahoma State Rep. Ralph Shortey advocated for laws legalizing discrimination against the LGBT community before pleading guilty to child sex trafficking. Evangelical activist John Perry was a close associate of Roy Moore and noted anti-LGBTQ activist Mike Huckabee, even co-writing books with each them. Perry was accused of molesting two teenage girls in 2015.

The Duggar Family (of 19 Kids and Counting fame) harassed a 16-year-old transgender girl,called trans women sexual predators, and claimed Christians should have the right to discriminate against gay people. They were very popular within Republican circles, until it was revealed that one of their sons had sexually abused two of his younger sisters for years. Former Speaker Dennis Hastert attacked gay men as sexual predators, until he was accused of molesting several young men and went to prison for the related cover-up.

And of course, our sitting vice president believes it’s acceptable to use electrical shocks to “cure” people of being gay (which he has denied) but still enjoys wide support among his party.

We need to acknowledge that the GOP’s acceptance of Roy Moore’s fanatical and dangerous brand of anti-LGBTQ hate is no accident. After all, the Republicans listed above didn’t abandon Moore when he claimed same-sex marriage is a “slippery slope to polygamy and incestuous relationships.” Their complicity is a signal that the assault on public queer life is entering a new and more dangerous phase. Currently, the Trump administration is working to packing the federal courts with judges who hold to that same brand of overt bigotry.

The same party that was fine with having someone like Moore in Congress until five women accused him of sexual misconduct has rubber-stamped that effort.

Jeff Mateer, a federal district court nominee, claims that diversity training is “brain-washing” and believes that trans children are “part of Satan’s plan.” Steven Grasz, a nominee for the Eighth Circuit Court of Appeals, has advocated for conversion therapy and claimed trans people in bathrooms are a threat to public safety.

Stuart Kyle Duncan, nominated to the Fifth Circuit, has claimed that transgender people are “delusional” and that their existence is “junk science.” Damien Schiff, recently confirmed to the Court of Federal Claims, disagrees with the decriminalization of sodomy and has criticized anti-bullying measures as “teaching gayness in schools.” Combined with their hold on Congress and the presidency, Republicans now have the opportunity to rewrite LGBTQ policy with impunity.

This new, uncloaked brand of hatred represented by Roy Moore is the largest threat to the LGBTQ community’s safety and stability that we have seen in a generation. It threatens every inch of progress we’ve made in the last two decades.