Britney Spears famously said once that “There’s only two types of people in the world. The ones that entertain, and the ones that observe.” But in truth, there’s actually a third type of person, and that’s the one who attains the rare status of icon.

Whether it’s because of her enviable discography or the way that she successfully triumphed over her personal demons, Britney is so much more than a mere entertainer, providing inspiration to millions of straight and queer fans alike for the better part of twenty years. Now that she’s taking her Piece Of Me show worldwide, the legendary performer is back to remind fans once again why they’ll love her ‘till the world ends with 27 of her very best songs.

INTO was lucky enough to join Britney for the first two stops of the tour’s European leg, screaming and shouting her name at Brighton Pride on August 4th and then all over again two days later in Berlin’s Mercedes-Benz Arena. Whether she sang stone-cold classics like “Stronger” or deep cuts like “Touch Of My Hand”, the fans recited every single word back to her on both occasions, performing the entire setlist along with her. The audience even grouped together at one point to scream out the question “Who is it?”, to which our icon replied, “It’s Britney, bitch,” complete with a knowing smile.

Despite the almost religious devotion that modern-day pop stars like Taylor Swift and Lady Gaga inspire, no one other than Britney’s own idol, Madonna, could hope to match the sheer impact of her tour setlist. Who else could perform fifteen year old album tracks and still raise a deafening cheer every single goddamned time? Honestly, you haven’t lived until you’ve heard Britney huskily whisper the spoken word portion of “Breathe On Me” and then surprise fans with an explosion of glitter on the word “blow.”

Deep cuts from In The Zone aren’t the only surprises that Britney has in store for fans on tour either. In an attempt to update some of her most popular numbers, “Toxic” starts off with a creepy lullaby sound and the chorus for “I’m a Slave 4 U” is interjected with elements of the recent Migos hit “Walk It Talk It.” Ballads like “Everytime” and “Lucky” are ignored in favor of underrated gems like “Clumsy” and “Do Something” in order to keep the tempo up and appeal to fans old and new. Most surprisingly of all, Britney and her dancers break it down at one point to some of Missy Elliott’s most popular tracks, including “Work It” and “Get Ur Freak On.” The petition to see them reunite on a new remix of their 2003 VMA collaboration starts here.

It’s impossible to pick out one single moment as best on the Piece of Me tour. Is it when Britney writhes around on a pole during “Slave 4 U” like the snake that accompanied her at the VMAs? Or how about when she bounces around in neon sportswear for the criminally overlooked promo single “Do You Wanna Come Over”? The inevitable disappointment that comes from not being chosen to get whipped on stage during “Freakshow” soon gives way to a whole different kind of thrill, so it’s no wonder that Britney kept this portion of her Las Vegas set intact for the tour. 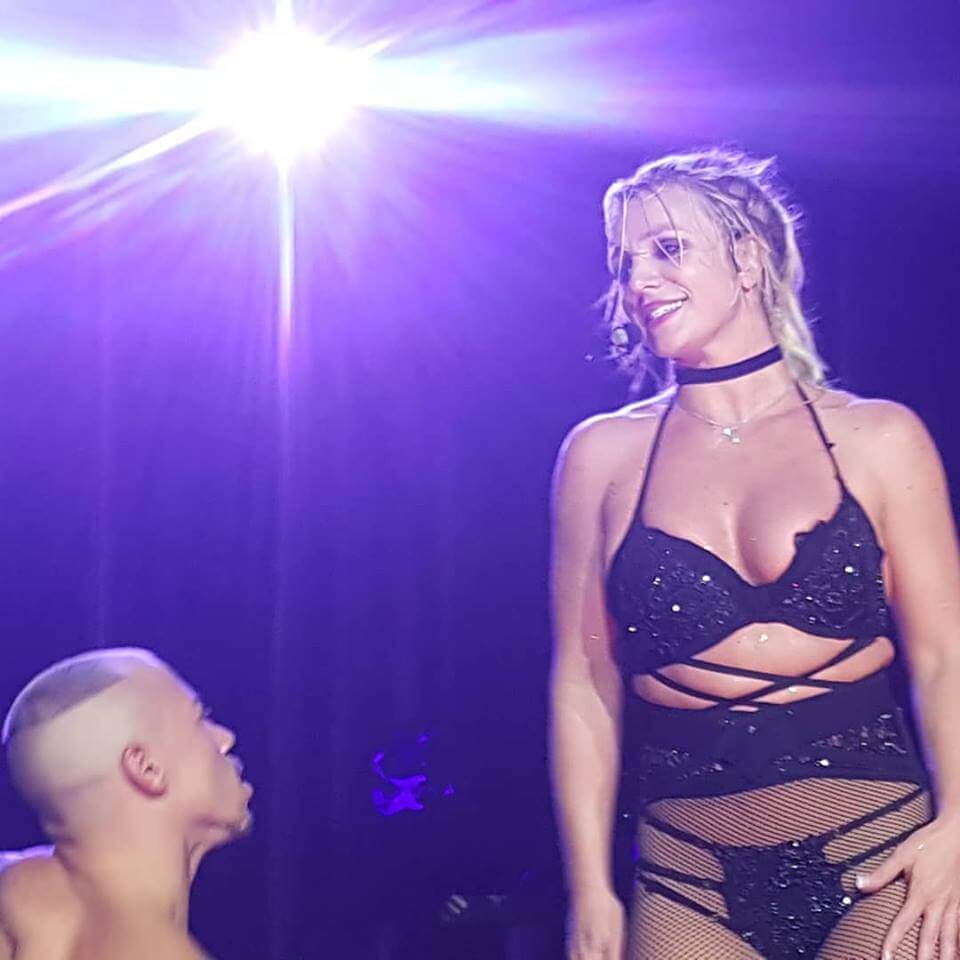 At Brighton Pride at least, one of the undeniable highlights of the set was the closing number, “Till The World Ends.” Already hyped up by the double whammy of “Stronger” and “(You Drive Me) Crazy”, the crowd lost their minds as confetti cannons fired into the sky while Britney waved the Pride flag in front of 57,000 people who had come together to celebrate love. In that moment, it’s no exaggeration to say that Godney had well and truly earned her title, lapping up the adoration of the countless millions who worship at her altar of pop.

Of course, the LGBTQ community loved Britney long before she headlined Brighton Pride. Throughout her career, the Princess of Pop has consistently promoted equality, to the point where homophobes are now trying to ban her music, and for those who grew up memorizing her every dance move or Titanic-themed interlude, Britney’s influence is unparalleled.

While she rarely interacts with the audience on stage anymore, the struggles that the GLAAD award winner has openly endured in the public eye endear her to queer fans in a way that no other pop star can match. Sure, some critics kicked up a fuss when it was declared that a heterosexual, cisgender star would headline Brighton Pride, but her vulnerability and refusal to give up in the face of adversity is exactly what makes her so special in the eyes of the LGBTQ community.

Although other stars might be crucified in the media for lip syncing so much or falling behind on a few dance steps, “Miss Bad Media Karma” has already endured the very worst that journalism has to offer and yet she remains untouched for the most part, like a pop phoenix that’s risen through the vitriol and taken flight. Early on during her Brighton set, fans could even overhear Britney asking her backing dancers where they were exactly, yet mistakes like this don’t even matter to a devoted fan base that remains enamored by her numerous costume changes and commanding stage presence.

The truth is that Britney will never be the same as she was when she first won us over with her schoolgirl innocence back in 1999 and that’s OK. Actually, it’s even better than OK. Although she looked nervous occasionally during her sets in Brighton and Berlin, seeing Britney not only survive but continue to thrive in the spotlight is exactly the kind of success story that the LGBTQ community needs now. Whether she’s 17 or 71, “Miss American Dream” will always be an icon to both those who entertain and those who observe. And that’s exactly why fans will continue to love Britney ‘till the world ends.