Joan Jett is an undisputed legend of rock ‘n roll. Her early work in The Runaways inspired young women, in particular, on an international scale, and her own individual artistry has continued to ensure even those born in the mid-to-late aughts can recognize her signature smoldering eye and guitar-toting swagger. Both individually and alongside her former bandmates, she’s been the focus of multiple books, films, and other media, the newest being a documentary called Bad Reputation, making its L.A. premiere at Outfest tonight.

Because of our fascination with an idol who has made it through highly-publicized problems that include, but aren’t limited to, misogyny, violence, verbal abuse, and addiction, Jett is iconic for more than just her musical prowess.  Yet while she’s open about her feminism, her veganism, and the rougher points of her life and career thus far, she has spoken little about her sexual identity and personal life as it relates to romantic or sexual relationships. In fact, she’s been infamously cagey about her assumed queerness in interviews, biographies, and media appearances — and Bad Reputation is no different.

“Anyone who wants to know who I am can just read my lyrics — I’ve always written about who I am,” Jett told Interview in 2010. She went on to explain why she won’t speak openly about being  “a lesbian or bisexual or whatever,” as the interviewer phrased it.

“Look, in The Runaways I learned at a very young age, because I could see the looks in the writers’ eyes when they would ask me questions about the band and our offstage antics, and I could see from the way they asked the questions that if I answered this stuff, that was all they were ever going to write about,” Jett said. “It was one of those gut-instinct things that doesn’t have to be taught. If you want to go there, yeah, then that’s what they’re going to focus on. But that’s not what I want people to focus on–I want people to focus on the music. And if they want to know who I am, I write about who I am in the lyrics, so don’t be lazy — read the lyrics and figure it out for yourself. I sing to everyone, that’s the bottom line. You don’t want to say, ‘All right, you guys, you can’t be involved in this.’ You want everybody to be involved. You want everybody to want you.” 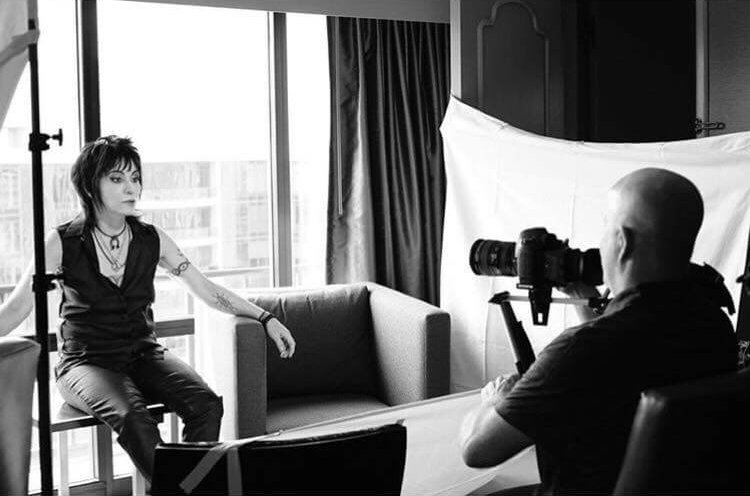 This sentiment is not Joan Jett-specific, of course. This coy kind of “are they/aren’t they” closeting is one that many public figures have clung to in order to be accepted, liked, and lauded for their talents instead of being either embraced or discarded because of their queerness. But while others have come out in these arguably more queer-friendly times, or been outed by those close to them after their deaths, Bad Reputation solidifies that the 59-year-old Jett is still not looking to speak on her perceived queerness.

Directed by Kevin Kerslake, Bad Reputation features one-on-one interviews with Jett as well as friends and collaborators, including Michael J. Fox, Debbie Harry, Miley Cyrus, Billie Jo Armstrong, Kathleen Hanna, Kristen Stewart, Iggy Pop, and Laura Jane Grace. It’s mostly these individuals who speak to anything related to Jett’s influence on LGBTQs — biographer Evelyn McDonnell points to Stonewall and the start of the gay liberation movement to frame the moment in which Jett started entering into the Los Angeles party and music scene.

In the film, Jett says she grew up loving the camp of Cabaret, so her fascination with the raunchy glam and punk rock scenes of mid-’70s L.A. was helping her to realize her dream of performing music for a living. One popular venue was the Sugar Shack, where Runaways producer Kim Fowley took Jett to find bandmates.

“The room was full of miniature lipstick lesbians, teenage girls — then you had the gay boys who were mincing around,” Fowley says in an audio recording of the night they met Cherie Currie. Currie instantly recognized Jett and came up to Fowley, who told her: “You’re either cruising her ‘cuz you’re a dyke or you want to be the lead singer of the Runaways.”

Once the band had any kind of notoriety, it was hard for them to be taken seriously, simply because they were women. The only time Rolling Stone wrote about The Runaways, Jett says, was when the band was kicked out of Disneyland for “lesbian behavior.”

“We’re in a line taking a photo and we put our arms around each other, walking. ‘That’s it — lesbians! Out!'” she recalls.

Unlike other Runaways films like Edgeplay or biographies like McDonnell’s Queens of Noise,  Bad Reputation doesn’t discuss the sexual relationships between members of The Runaways. In Floria Sigismondi’s feature film The Runaways, Kristen Stewart portrayed Jett and kissed Dakota Fanning’s Cherie Currie in a much-discussed scene that eventually turned sexual. Jett was highly involved with the film and was on set to help Stewart channel a younger version of herself. At the time (2010), Stewart was not yet out, either, so discussions on the kiss or any sexual dalliances between Jett and Currie were given the same kind of shrug as Jett’s discussion with Interview.

Other Runaways have been more open about the sexual fluidity in the group. In Currie’s own memoir, she wrote about her relationship with Jett and in interviews, said she “experimented” and “had fun” with Jett.

“[The Runaways] tells the truth. First of all, back in the mid-’70s, Bowie had just come out as bisexual and so had Elton John and that was really intriguing,” Currie said. “We experimented. We weren’t in love with each other. We just had fun. I like that it’s in the film. So many kids go through these serious guilt trips. I want them to know it’s okay.”

Queens of Noise also detailed Jett’s relationship with Runaways songwriter Kari Krome and Lisa Curland, and quotes former bandmate Lita Ford as having left the band because “they were gay and I wasn’t.”

“It was wild to me. My parents had never explained to me that people are gay. When I met them, I was like ‘You like girls, but you’re a girl.’ I didn’t figure it out, I didn’t like it, and I didn’t want to be around it,” Ford told McDonnell.

In Bad Reputation, Jett spends most of her time talking about (what else?) her music, but inevitably, there are other themes that become points of discussion — mostly misogyny, and less so, homophobia, and when the latter it is mentioned, it’s posed as an assumption of sorts because, of course, none of The Runaways ever came out publicly. (Late Runaways drummer Sandy West was also a lesbian.) 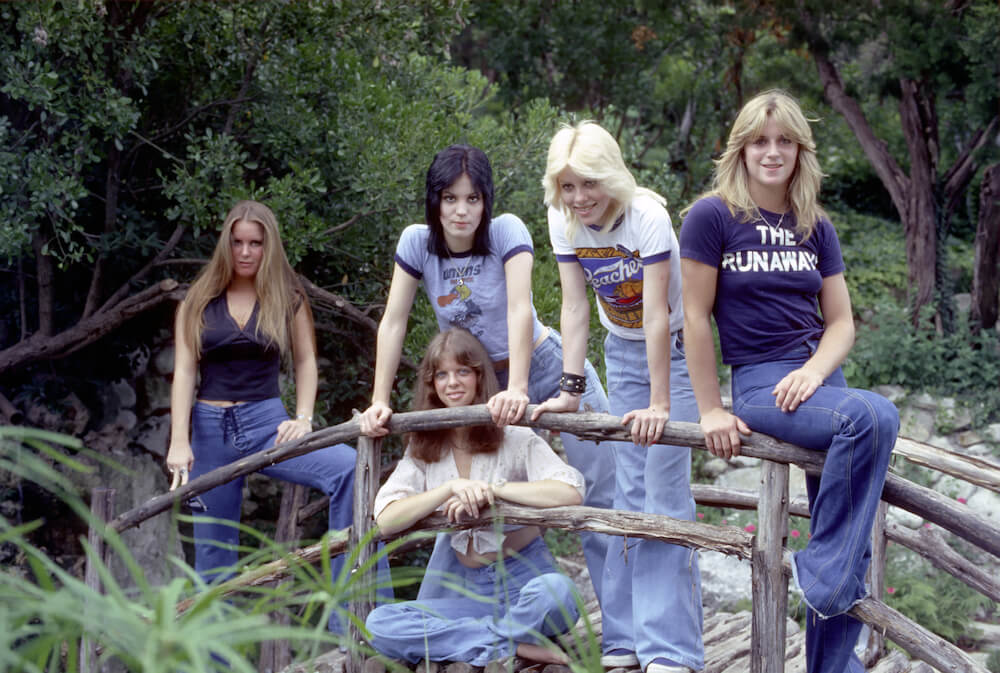 There’s no doubt that Jett has been queering rock since she started playing the guitar. In Bad Reputation, Kathleen Hanna praises Jett’s use of female pronouns in her cover of “Crimson and Clover.” Later in her career, Jett would sing a few songs that were more explicitly queer (such as the bisexuality-themed “A.C.D.C.”) or, in the case of “The French Song,” group sex, but most of her work is free of anything gender-specific, or anything that might directly hint at queerness. It was more her performance that could read as queer — a sort of female masculinity that played with gender and sexuality.

“I don’t need a movement like [feminism] to make me feel like a person,” Jett said in 1981, later rescinding these thoughts and clarifying she wanted to “mend [her ways to feminism,” becoming involved with riot grrrls and befriending Bikini Kill frontwoman Kathleen Hanna. Now, she’s hailed as a feminist icon, embracing the label.

What’s frustrating is the idea that speaking about sexual identity or, more specifically, queerness is unrelated to and unimportant in regards to a discussion of artistry or musicianship; that it is to be ignored or hidden while other facets of humanity are deemed more worthy. That in a film about one’s life and career, touching on this part of who Jett is (or what we can only assume is) is without merit. Having one of rock ‘n roll’s biggest icons — especially one of the foremost women of the genre –seem to identify as queer but not want to say so taints the message Jett seeks to promote. The perpetual idea that public figures espouse of not feeling it necessary to invite fans into their bedrooms is based on an assumption that a discussion of sexuality or sexual identity is a salacious, dirty, off-limits topic — tabloidy and tawdry. Instead, queer identity is one not only worth speaking on, but necessary to speak on, especially in this Trumpian era where the rollback of LGBTQ rights is threatening the community into a similar silence and shame.

So it’s curious that the LGBTQ film festival Outfest would host the L.A. premiere for Bad Reputation, especially considering that — outside of playing a handful of Pride festivals and appearing in videos for Miley Cyrus’s Happy Hippie Foundation — Jett hasn’t aligned herself with LGBTQ rights in any major way. 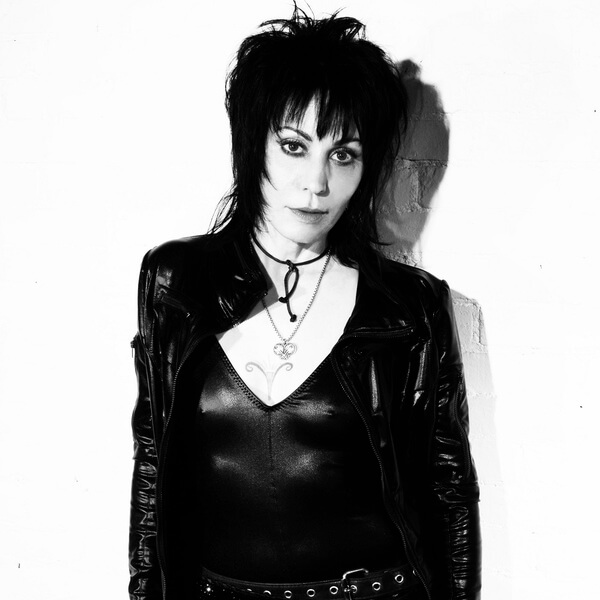 “A lot of musicians, entertainers — they develop a degree of success and notoriety from their work,” says artist and friend Shepard Fairey in the film. “Frequently they’re less inclined to take a stand because that might alienate a segment of their audience. Joan, on the other hand, is very outspoken.  … I wish that more people who were in a position to use their voice beyond the art they create would do that.”

“I know she champions for women’s causes and LGBQ [sic] causes and that’s so great but I don’t think she’s mushy about it. She’s straightforward about it,” former co-star Michael J. Fox says of Jett. “‘This is the way it should be and fuck you if you don’t see it that way.'”

If Jett is supporting LGBTQs, it’s not something she wants to speak about herself. Animal rights are given more deference in Bad Reputation, as are Jett’s feelings about the military and war. Is Jett’s existence as a perceived queer person enough to validate her as a champion of LGBTQs if she has no interest in participating in the wider conversation? Instead, Kim Fowley is the one speaking on “dykes” and “fags” in Bad Reputation, and Jett maintains music is her mate, for better or for worse.

Joan Jett is famous for being a badass, to be sure, but is there something lost in making sexuality the place where she draws the line? And for Bad Reputation to play at Outfest, whose motto is “showcasing the best LGBTQ stories from around the world,” almost seems out of place.

“Joan Jett has had legions of queer female fans for decades,” said Lucy Mukerjee, Director of Programming for Outfest, in a statement to INTO. “Though she doesn’t discuss her sexuality in the film, it’s an authentic portrayal of a rebel and a disruptor, someone who doesn’t feel comfortable being a role model or a spokesperson for a cause. The film speaks to her queer fanbase by delivering a satisfying insight into the backstory behind her career highs.”

Bad Reputation might, however, not satisfy those looking for out and proud queer artists to speak to overt queerness.

In 2018, those looking for Jett to speak openly about identifying as a dyke without needing to make anyone squirm will have to keep waiting.

Bad Reputation is playing at Outfest tonight and will hit theaters this September.