As you may be aware, today is a pivotal day for New Yorkers such as yourself. Fashion Week is finally over, and it’s time to focus on something other than a new year of serving looks.

Let’s instead think about the future in a different way, in terms of who is making moves for your city; who is making sure that you are able to get around, even if you only acknowledge Manhattan and bougie, gentrified parts of Brooklyn; and who wants you to have as much sex and smoke as much weed as possible without having to answer to anyone about what you do with your own damn body.

That candidate is Cynthia Nixon.

Let me break this down for you, who I’m hoping may be part of the 51 percent of the white woman population or 14 percent of gay-identified voters who supported  Donald Trump in 2016. It’s possible you didn’t “like” Hillary Clinton. Maybe you found her to be too obsessed with pantsuits, or unlikable based on the fact she’s a 70-year-old woman who isn’t Dolly Parton or Cher. And I’m not forgiving you for any of that. But I am trying to reach you on your level — that truly basic level in which I ask that you please show up at the polls today and cast your vote for  Cynthia Nixon.

To begin, let’s forget the subway initiatives because maybe you’re a Carrie and prefer to Uber, or a Samantha who would rather host than travel. Cynthia Nixon wants sex ed to be more comprehensive and inclusive. She doesn’t want unqualified educators misrepresenting the important intel you missed out on by learning about the power of abstinence and eventually had to learn from watching late-night HBO or its sister channel Skinemax. Sure, you’re already past that point in your life, but think of the children. Think of their future! HBO literally just announced they wouldn’t be doing sex-themed programming anymore, and E! cuts out all the good parts for the TV edit of SATC.

Surely you recall that Carrie’s Upper East Side brownstone was rent controlled — and only $700 a month.  Even by those early to mid-2000s standards, that was a steal. Well, guess who wants to make sure your landlord can’t fuck up your life with some bunk ass rent hikes? You guessed it:  Cynthia Nixon. She has very specific ideas about how to stabilize rents, provide affordable homes, and prevent eviction.

Then there’s climate change, which you may not worry about too much because it harshes your mellow and Al Gore isn’t hot. Well, think back to the episode of SATC where Samantha made the ladies dine at Raw — aka where she first met Smith. I’ll have you know that eating raw foods is one of the best ways to conserve energy, which falls in line with  Cynthia Nixon’s plan for a clean energy economy and climate justice. She’s also not afraid to recycle food like a freegan.

And recall that time Carrie was this close to being arrested for smoking pot? Not on  Cynthia Nixon’s watch! Not only does she want to legalize marijuana, which would mean dramatically reducing the around 17,500 people arrested for possession per year, but she wants to put make sure New Yorkers aren’t paying thousands in taxes ($118,000 per person per year!) to keep people in city jails, and $70,000 per individual in prison.

Let’s go out on a limb here and say you’re part of that Trump-voting population who actually cares about other people — people who aren’t just like you. Consider, for just a moment, how  Cynthia Nixon’s ideas for immigration rights, disabled rights, and ending homelessness could greatly improve the lives of your fellow New Yorkers. I’d like to believe that anyone who ever deemed themselves a Carrie, a Samantha, a Miranda, or even a *gay gasp* Charlotte has the ability to have empathy like the characters they align themselves with. Could they have had more? Certainly, and so can you.

And, no, Cynthia Nixon is not Miranda Hobbes. But she is a born-and-raised New Yorker, daughter of a single mom, almost-EGOT-winning, queer, feminist, wife, mom, breast cancer survivor, and all-around badass who Miranda Hobbes would most definitely have voted for instead of Andrew Cuomo, who consistently acts like she doesn’t have a shot in hell in knowing how to govern New York.

As a Sex and the City character once said, “This is so typical of men in power. They just love to be dominated and humiliated.”

So, please, white women and gays, get out there and vote for Cynthia Nixon.

P.S. Cynthia was at Fashion Week, too. Your fave could never. 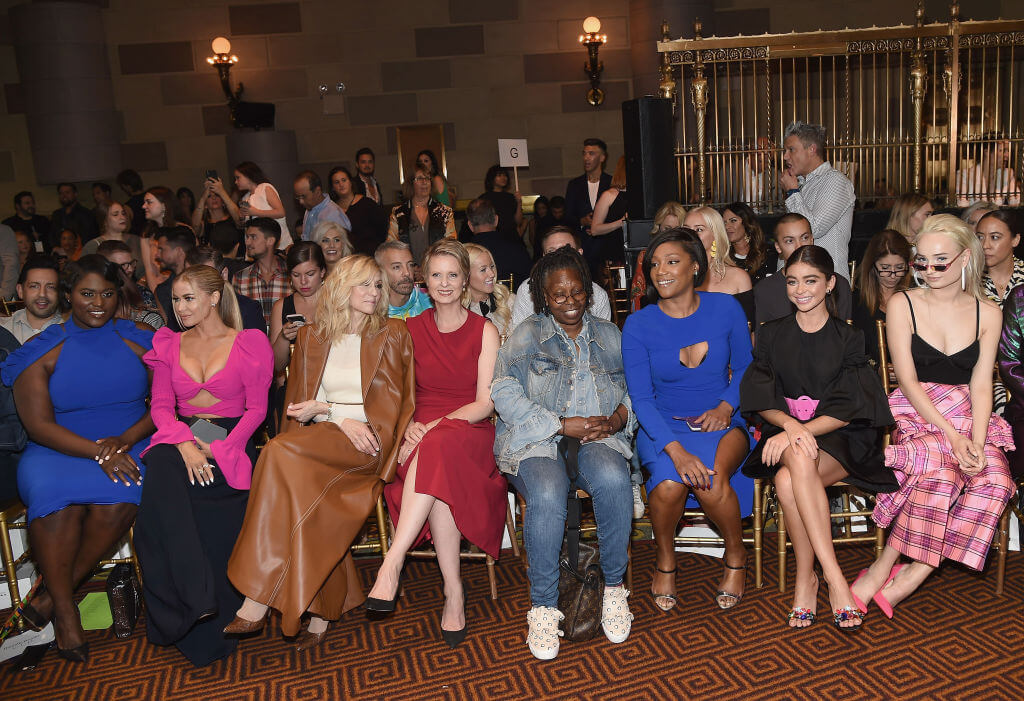