Here’s a confession: Lately I’ve realized I think about movies the same way I think about guys. I’m unattached to any one thing, so I’m a pretty promiscuous filmgoer. I’ve been around the block and I definitely don’t have a type. Plenty are good enough to sample once, and some smell rotten from across the multiplex lobby. And then there are the select few who draw me back in over and over: the guilty pleasures and the too-good-to-give-up. But it’s been a while since a movie gave me as much satisfaction as Steve McQueen’s new heist movie Widows.

Widows pleasured me until I collapsed in ecstasy. Then it glared at me from across the bed, lit a cigarette, and said, “That all you got?”

As a rule, they don’t make them like Widows anymore. First of all, this is a character-driven mid-budget studio drama, the kind of film that used to be the industry’s bread and butter until the bottom fell out of the market and they were replaced by tentpoles. In any given year, there would have been a heaping handful of these films, most of which rehashed narrative conventions and provided respectable star vehicles. And every year or so, even as recently as the ’90s, a couple of those movies would announce themselves as instant classics: skillful enough to deploy or dispense with tropes as it saw fit, dramatically rich enough to satisfy an audience’s natural impulses, and savvy enough to contribute something to national discourse.

Now that the lion’s share of the market is based on popular intellectual property and studios have half-forgotten how to develop truly original material, it feels like a miracle every time you get to go to the theater to see something that supplies its thrills the old-fashioned way: with brain power, heart, and sheer grit. The audience at my preview screening of Widows sang out in satisfaction with each swerve of the narrative. It has it all.

What makes Widows so palpably, irresistibly good? Let’s start with this cast. It’s a large one: a multi-generational company of established stars, distinguished character actors, and new faces, and there is not a weak link. Of all the major talents in Widows, the one most deserving a juicy role is the actress who creates Veronica “Ronnie” Rawlings, the protagonist, from the inside out: Viola Davis. In the opening shot — which was met with hollers of approval — Ronnie wakes up in her sunshiny bedroom and shares a passionate kiss with her husband Harry, played by Liam Neeson. He has to go to work. It’s a lavish apartment in a Chicago high rise, and it’s theirs because Harry is a career bank robber. 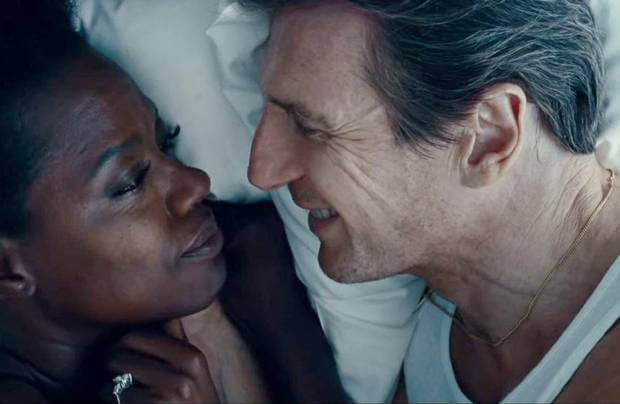 In the next few minutes, the screenplay — freely adapted by McQueen and Gillian Flynn from a classic British television serial — skillfully introduces us to a host of characters, establishing an intricate cross-section of a city built upon intersectional divisions. First, we meet Harry’s business partners and, more importantly, their wives. Linda (Michelle Rodriguez) owns the kind of dress shop that seems in perpetual danger of closing. Alice (Elizabeth Debicki) is the white working class girlfriend of a dumb sack of shit who treats her like a commodity. The third, Amanda (Carrie Coon), has just given birth. None of the four know what’s coming.

The men go out on their last job: it doesn’t go as planned, and all are killed. Their widows are thrown into miserable grief, and their financial futures are ripped from them. The bank takes Linda’s shop. Alice’s mother (Jacki Weaver, a hoot) advises her daughter to market herself as a high-class escort. Worst of all, Veronica finds out Henry robbed a South Side mob boss, Jamal Manning (Brian Tyree Henry), who is running for alderman of his home district. The widows now owe him two million dollars, which Manning’s brother Jatemme (Daniel Kaluuya, sensational) will gladly collect by any means necessary.

Just inside the limits of this district is the mansion of the incumbent alderman, Tom Mulligan (Robert Duvall). Mulligan is a masterful portrait of white patriarchal power: An old-school liberal with a sticky finger in every pie who uses racial slurs in private. He’s retiring but he can’t give up his influence, so he’s backing his son Jack (Colin Farrell) in the upcoming election. Ronnie, backed into a corner, calls the widows together to implement her plan. She has Harry’s notebook with all his detailed plans for their next heist. The women have no better option than carrying it out themselves. That’s where we start, and from there, the jolts of surprise and wit come fast and furious. 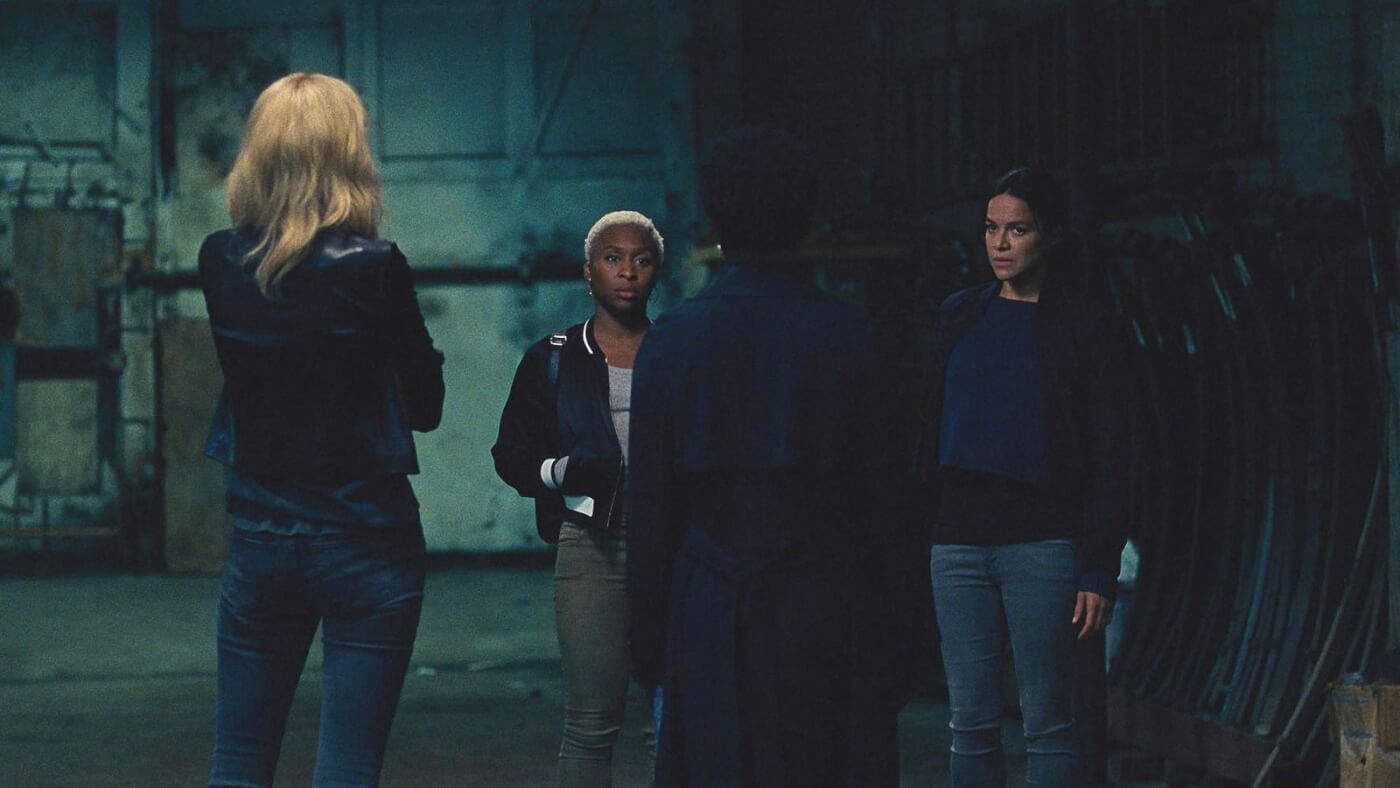 Widows packs in a staggering amount of plot with gusto, and the Chicago of Widows is as rich a sociological study as Edith Wharton’s New York or Paul Verhoeven’s Vegas. Gillian Flynn proves herself the screenwriter best equipped to present it to us. In both her novel Gone Girl and its subsequent superlative screen adaptation, she spun a web of gendered intrigue in which no one told the complete truth, and in which no one’s intentions were wholly without avarice. She can easily show what her characters want without telling us, and McQueen is a master of visual metaphor, so their script for Widows is loaded with scalpel-sharp visual signifiers of late capitalism.

Flynn and McQueen confidently draw connections between the hair salons and the cedar-paneled back rooms of urban power: In one brilliant long shot, we follow the Mulligans’ limo from a campaign rally for black business owners to their gated mansion just blocks away. When we first see Alice and her asshole boyfriend in their one bedroom, there is an expensive motorcycle sitting in the living room. Ronnie’s apartment, her exquisite wardrobe, her personal driver, and her ever-present lap dog do a lot of talking: It goes without saying that hers is a lifestyle she must protect at all costs. In a segregated, corrupt city, where identity is destiny and proximity to power is the ultimate protection, the alternative is unthinkable.

Faced with doom, Ronnie dominates the proceedings with raw intellect and determination, and as Ronnie finds her strength, Viola Davis unleashes all of hers. This is what movie stardom looks like. We’ve seen Davis in great roles, but her material has just as often been a disservice to her gifts. (She recently disowned her best-known film, The Help, for marginalizing its black characters.) But Ronnie is an extravagantly complex American heroine for our time, and if the plot sometimes veers perilously close to soap opera — look out for that dog! — Davis grounds the developments in reality with pure technique. She’s magnetic and she knows it.

The casting is fabulous across the board. It has been a while since queer icon Michelle Rodriguez has gotten the kind of role she deserves, and she’s excellent here. Tony winner Cynthia Erivo steals her scenes when she joins up halfway through the film. The male company is uniformly good, especially Kaluuya. But it is Elizabeth Debicki who will make audiences lean in. Tall and waiflike with cool, expressive eyes, Debicki is a hypnotic screen presence of the Shelley Duvall variety, and she gives Alice a tremulous, throbbing sadness. She really gives you the sense that this is the first time Alice has ever been taken seriously.

Before 12 Years A Slave put him on the shortlist of major prestige directors, Steve McQueen made insular, cold art house films (Hunger, Shame) that focused admirably on the extreme capabilities of the human body but ultimately felt insubstantial. And the excellence of 12 Years A Slave notwithstanding, nothing in his body of work would suggest that he’d be a natural director of popular action cinema. But with Widows he is at the top of his game. Yes, it has the most gripping action sequences of any movie this year. He directs them with precision and energy. But these sequences work because the dramatic engine that got us there runs without a hitch. He smoothly directs a vast ensemble into one cohesive unit. The plot keeps our hearts pounding with dread, but he knows when to linger just a little while longer on a powerful close-up.

And most importantly, he knows exactly what the movie market is missing, and he gives us everything we’ve been craving. After two thrilling hours, Widows gives the best climax you’ll have all year.

Widows is in theaters now.