The image of queer-as-city-dweller is a prevalent one, even as many of us feel a pull to the land. But several organizations are working to make the outdoors a safer and more welcoming place for LGBTQ communities. Coming from many different perspectives, these community leaders work actively not just on getting more queers to hike, bike, climb, and learn survival skills — but also to acknowledge the diversity of experience and the range of oppressions that LGBTQ people must deal with in the outdoor community. To find out more about this movement, INTO spoke with eight people who head projects that share the goal of getting queer people outside.

What began for Wiley as a fun way to cut loose became an opportunity to bring people with a love of drag and the outdoors together. Wiley is an attractive, masculine ginger and former Eagle Scout, palatable to a wide mainstream audience. As this is Wiley’s first set of publicized drag performances, he realizes that there is lots he has to learn about drag, gender, and the more marginalized queer communities around him; he is incredibly open to it.

“Pattie is going to school,” Wiley tells INTO. “If there is a bridge between [the outdoors and the queer community], I want Pattie to dance on it.”

The Venture Out Project is a bit more straightforward in its approach to a queer outdoor community, though I’m sure there have been some on trail dance moves. The Venture Out Project began leading backpacking, paddling, and skiing trips in 2014 when western Massachusetts based founder Perry Cohen realized he was trans. After a particularly harrowing climb, Cohen said, he realized, “for the very first time I could trust this body,” and wanted to give other queer and trans people that same freedom. Participants have said that traveling as a pack has made the outdoors feel less scary and Cohen echoes that an important part of Venture Out trips is being able to go out with a group that “validates your identity.”

Traveling this way has helped keep participants safe in situations on popular trails which tend to attract a lot of peak-bagging-bros. Cohen recalls an incident in which a man on the Long Trail harassed a Venture Out group. The man asked: “Are you a school group? Are you a church group? Well, then what the hell are you?” Cohen replied, “We are a group of grown-ass adults!” The group decided to pitch their tents elsewhere. 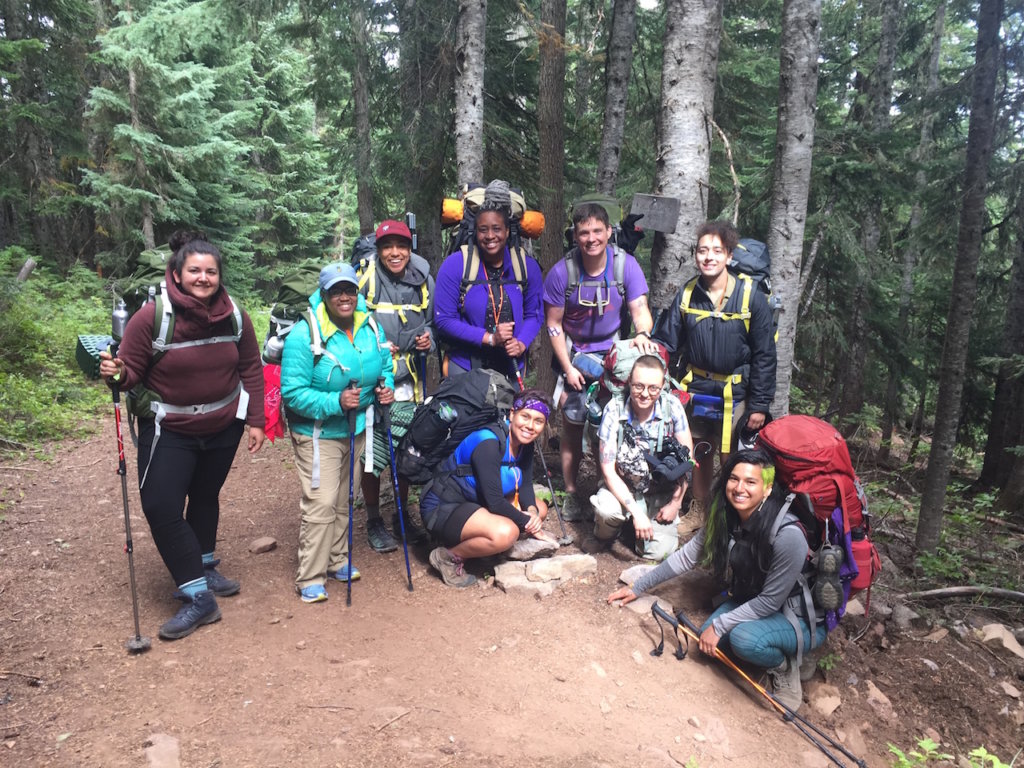 Older and better-funded than a lot of newer groups, The Venture Out Project has a large educational arm both for adults and students. Youth have been a big focus from the beginning, but adults who felt like they missed out on scouting as kids have helped the project grow. Cohen realizes, too, that as a white trans man he may not always be the right person to lead every trip. For that reason, they also partner with several organizations also featured here such as Wild Diversity and Unlikely Hikers.

When Unlikely Hiker’s founder Jenny Bruso first started spending more time in the outdoors about seven years ago, she struggled to find others like her: queer, fat, femme, on the trails. As a newbie hungry for information, the how-tos and blog posts about how and where to enjoy nature were mostly white, often male.

Michaud-Skog offers group hikes in over 16 locations and makes her vehicle her home as she travels across North America. She describes herself as “living the #fatvanlife [and] chatting with folks interested in being ambassadors for creating body positive outdoor community in their cities.” She makes sure to emphasize that no one is left behind, and makes accommodations for people with disabilities. Bruso does as well, organizing her hikes into three categories: general hikes which are five or more miles and can have some significant elevation gain; “Low-Intensity”—three to four miles, with 500 feet of elevation gain or less; and the “Nice and Slow” series—slow paced, flat trails at two miles or less, so that participants can choose the level that’s right for them.

Bruso’s group Unlikely Hikers showcases queer folks, people of color, differently-abled and, especially, fat folks, an identity Bruso finds to be a difficult one in the outdoors community. It has clearly resonated; the Unlikely Hikers Instagram account has over 50,000 followers. Through various sponsorships from outdoors companies, speaking engagements and other freelance projects, Bruso was even able to quit her day job waiting tables and devote herself full time to writing and outdoors projects earlier this year.

“Fatphobia is so widely acceptable,” Bruso told INTO. “There is pretty much no fat or queer representation in outdoor culture. It’s predictable that I am going to hear a lot of body negativity.” And when fat people are given space in queer community she finds that there is pressure to be the “good fattie.”

“There’s a huge responsibility to be the ‘fat outdoorsperson,”’ Bruso said. “People want a very happy, healthy fat person. They want you to exercise five times a week and eat vegan. But I’m the kind of fattie who will eat an entire pizza and then summit a mountain.”

Their advice on gear also fell flat, as many of the clothing items did not come in plus sizes and a lot of the gear was expensive, a sentiment echoed by Fat Girls Hiking founder Summer Michaud-Skog. As queer, fat, working-class women, the outdoors did not seem to reflect them, so both set out to amplify voices both like and unlike their own.

The new print publication Fatventure Mag is a digital and print zine featuring work by fat women and non-binary creators who are into being active but are not into toxic weight-loss culture. Co-founders Samantha Puc and Alice Lesperance, two self-described fat lesbians who are based in Rhode Island and North Carolina respectively, have struggled with this dichotomy.

“I ride my bike a lot,” says Puc, “but whenever people learn that, their immediate follow-up 90 percent of the time is, ‘How much weight have you lost?’ It’s so frustrating because I don’t ride my bike to lose weight — I ride my bike because I love it. I’ve been called all kinds of horrible things while out riding. People seem to feel very entitled to comment on my body and its shape, size and ability, particularly men, and that’s infuriating.”

Both are keen to give back to the queer community, donating 25 percent of the proceeds from their inaugural issue to Gender Is Over – If You Want It!, a non-profit that works with grassroots transgender rights organizations. But the Fatventure Mag editors also acknowledge that even fellow LGBTQ people can be discriminatory. 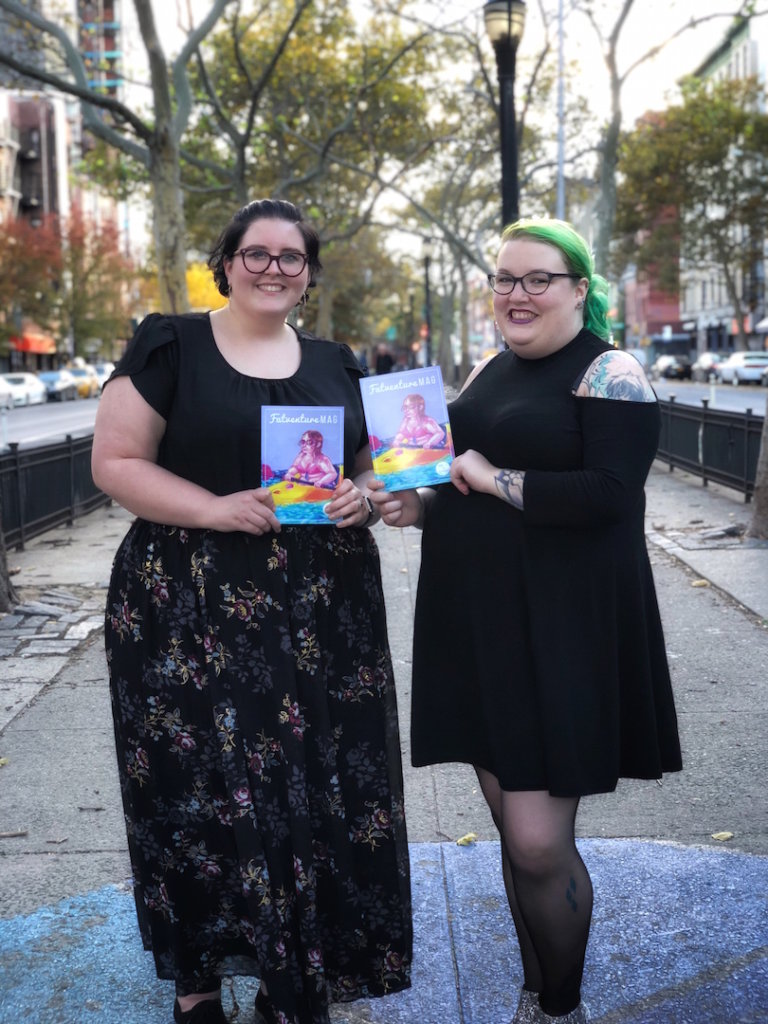 “I think I actually face more discrimination from thin queer people than from thin straight people when I talk about outdoor recreation, which is kind of bizarre,” Puc mused.

Lesperance agreed: “Hostility comes from all corners, and being fat is always a problem that thin people, both straight and queer, feel that they need to solve.”

This is a sentiment shared by queer outdoors groups that focus on people of color as well. Mercy Shammah started Wild Diversity, an adventure program for queers and people of color, because of a sense of hopelessness she felt as a black person in Portland, Oregon. She loves the outdoors of all kinds and leads trips dedicated to a wide variety of activities such as camping, canoeing, snowshoeing, archery, mushroom hunting and more. Wild Diversity even has a gear library that low-income users can borrow from. Portland is a great place for all these outdoor activities. But Shammah said what Portland lacks is racial diversity and support. Even when partnering with liberal organizations, Shammah said she often feels tokenized and used, to make it look like the organization has put in the work around race.

“It’s like a relationship,” Shammah explained. “On my next Tinder date [with an organization], I’ll know exactly what to ask. How many members in your organization are people of color? I don’t want to be the only one in the room. It’s uncomfortable, and it concerns me if people of color don’t stay.” She said she hopes that her reasons for not partnering with such orgs will help them look at what they are doing to make people of color feel welcome.

Pinar Sinopoulos-Lloyd from the “education and ancestral skills program” Queer Nature also finds it difficult to find people of color in leadership positions, even in LGBTQ Outdoor communities. The mixed native Huanca, Turkish, and Chinese non-binary person runs the program with their white non-binary partner So Sinopoulos-Lloyd. Based in Boulder, Colorado, Pinar makes it a point to identify the native inhabitants of the land, in this case the Ute, Arapaho, and Cheyenne. Queer Nature teaches naturalist studies, handcrafts, survival skills, and recognition of colonial and indigenous histories of land. The interracial nature of their foundation creates a space that at once centers voices of color while still welcoming white folks willing to engage in a learning process.

“Biodiversity creates resilience,” Sinopoulos-Lloyd explained, adding that this holds true for both nature and people, which they also see as inherently linked.

They work within DEI (Diversity, Equity and Inclusion) communities that focus largely on getting people of color into the outdoors. While this is a goal they wholeheartedly support, they would like to see more attention paid to aspects other than race as well. “I continuously get misgendered, even in those spaces,” Pinar said sadly, “and it’s heartbreaking.” 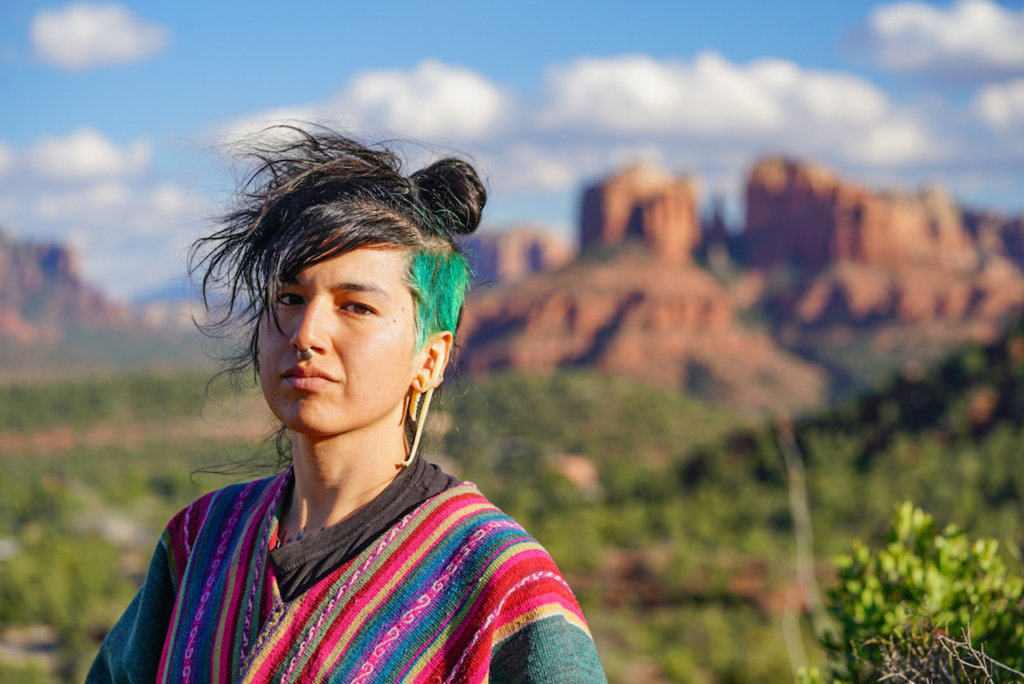 Facing gender discrimination and a lack of knowledge around pronouns and gender identity is taxing and takes a lot of internal resources for anyone, let alone someone with mental health and neurodivergence issues, which Pinar said is also rarely addressed in both outdoor and DEI settings. But Pinar also has a sense of humor about it all, laughing about they and their partner are colonizer and colonized. Or when talking about the struggle over resources and how diverse groups in the outdoors often see each other as competitors rather than allies, a stance perpetuated by the industry. Pinar jokes, “It’s like the Hunger Games sometimes. This horizontal oppression comes from long-term trauma and makes our liberation more difficult by perpetuating that which we are fighting against,. Co-liberatory work that isn’t trauma and resilience informed isn’t anti-oppressive.”

LGBTQ people might not see ourselves reflected in mainstream outdoors media or products yet, but even big companies like REI and Outside magazine are beginning to take notice, and some brands have sponsored Bruso, Venture Out and others. What most of these groups find most important, however, is honoring and supporting each other. Spread across North America, most are already in contact and offering each other support.

The queer outdoors community is small but mighty, one with a goal that Pinar Sinopoulos-Llyod summarizes with a simple motto: “I want to be an honorable ancestor for future beings. Have compassion.”