Ahead of Call Me By Your Name’s Nov. 24 American release, as critics and fans in festival cities fall in love with the film, whispers have begun to circulate about the film’s Oscar chances. Can an LGBTQ-themed movie win best picture two years in a row? Can Timothée Chalamet or Armie Hammer win Oscars for their work as star-crossed lovers Elio and Oliver? And more importantly, if it does win, what does that mean for the Academy Awards?

You see, Moonlight put a major crack in the dam. Before, no LGBTQ-themed film had won best picture; just the year before, Todd Haynes’ masterful Carol couldn’t even get nominated. If Call Me By Your Name could make it two in a row? That would be a sign of major change in an awards body that has had trouble in the past rewarding queer narratives.

But how likely is such a win? Let’s take a look at the awards landscape and determine just how well Call Me By Your Name could and likely will do with the Oscars. 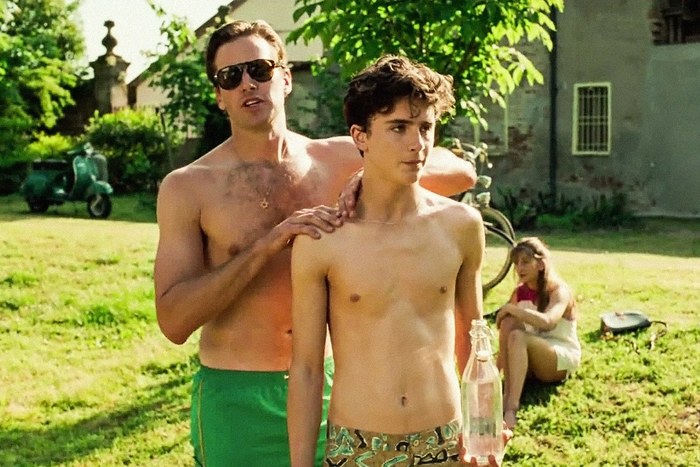 Unfortunately, because Call Me By Your Name’s score uses several pre-existing pieces of music, it will likely be disqualified from the best original score race. (A shame, because the score is such a highlight of the film.) Do expect it to show up in best original song for one or both of Sufjan Stevens’ two originals, though as of now, “Mystery of Love” seems more likely to get a nod over “Visions of Gideon.” Both would likely lose to “This Is Me” from The Greatest Showman, a song written by new Oscar favorites Pasek and Paul (La La Land).

The other categories all seem like long-shots: Call Me By Your Name’s sound isn’t remarkable other than for its music, while the pitch-perfect costume design (watch how Elio’s fashion transforms over the film’s runtime) is likely to be ignored for being less flashy. Cinematography is a possibility, especially considering director of photography Sayombhu Mukdeeprom’s love of luxurious, languishing shots, though it would likely lose to Dunkirk or Blade Runner 2049 there. And the editing, while perfect for the film, is too subtle to get noticed.

Screenplay is likely Call Me By Your Name’s absolute best chance at a win. James Ivory, Luca Guadagnino and Walter Fasano’s script is a remarkable adaptation of André Aciman’s novel, pulling the world out of Elio’s sometimes suffocating narration and bringing a more level-headed view. It keeps exactly what it needs and discards anything that would make the film feel like too much. It’s an excellent work of adaptation, it will certainly be nominated, and it will probably win.

Meanwhile, Guadagnino’s best director nomination is dependent on how well the film is received as a whole. We’re going to bet on him, but like Todd Haynes for Carol two years ago, he could easily find himself snubbed.

Michael Stuhlbarg is the only actor I’d call a lock for a nomination. As Elio’s supportive father, Stuhlbarg gets the film’s absolute best scene and monologue. He’s what you remember leaving and that’s pretty impressive, considering Call Me By Your Name includes a peach-fucking scene. Like Patricia Arquette before him, his final speech should be enough to seal his chances. That said, Willem Dafoe is a likely nominee for The Florida Project, and considering his career, he may be able to take the win over Stuhlbarg.

I hope for the Academy’s sake that they nominate Timothée Chalamet in best actor, because the gay riot that breaks out if he doesn’t will not be pretty. His is the best film performance of the year, and while he won’t win (Gary Oldman is too towering in Darkest Hour), he deserves the recognition of a nod.

Whither Armie Hammer, you ask? Unfortunately, despite his full-court press in the media, Stuhlbarg leading him in best supporting actor likely means he’ll be left out. Same goes for Amira Casar as Elio’s mother, though if I spoke honestly, I’m more sad for the latter than the former.

Hoo boy. So, i’ll say this: I’m more confident than ever that Call Me By Your Name is getting nominated. At first, its hype seemed too tenuous, too connected to Sundance Film Festival (where critics are put through such an emotional grinder that reactions can sometimes be skewed remember Birth of a Nation?). But the film has survived several festivals with buzz firmly in tact. It’s in.

Can it win? Probably not. Though there’s tremendous power in the specificity of Elio and Oliver’s story, it’s not the kind of big, sweeping cinema that typically wins here. Even Moonlight, which also told a specific, queer story, managed to impress through its structure and scope in a way that Call Me By Your Name doesn’t quite manage. Dunkirk, The Shape of Water and The Post are all more likely winners.

But that’s OK! Even if it just walks away with six or seven nominations and one Oscar win, that’ll be plenty impressive. Carol couldn’t even manage one, while Moonlight’s three were considered impressive. Change comes slowly; we’re fortunate that said change is as compelling and beautiful as Call Me By Your Name is.

Likely to be nominated: yes
Likely to win: no