Last weekend, a group of women laid down on the star-studded red carpet at the British Academy Film Awards. A London-based direct action feminist group, Sisters Uncut used the highly visible opportunity to bring attention to their work, fighting domestic, sexual, and state violence toward women, nonbinary, agender and gender variant people. This action was specifically protesting the UK government’s cuts to domestic violence services. Their shirts read “Time’s Up, Theresa,” their mission to bring awareness to Prime Minister May’s lack of action when it comes to providing funding to refuges and survivors of domestic violence.

“We saw that no one was doing anything to highlight what was happening to [domestic violence] services so we decided to do it ourselves,” Sisters Uncut member Emily (last name withheld) tells INTO. 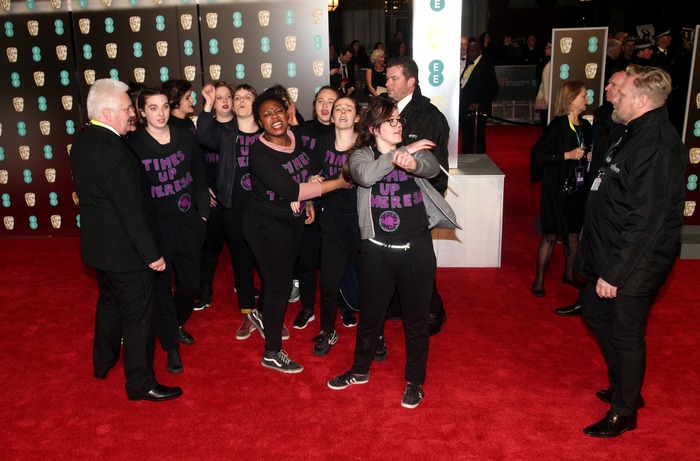 According to the Sisters Uncut website, two women a week are killed by a partner or ex-partner in the UK, however 34 specialist domestic violence refuges have been shut down. The Ministry of Justice, Office for National Statistics and Home Office released statistics in 2013 in An Overview of Sexual Offending in England and Wales which reported that “85,000 women are raped on average” and “over 400,00 women are sexually assaulted each year.” “One in five women” have experienced sexual violence “since the age of 16.” Moreover, people of color, migrants, drug users, the LGBTQ community, and those who are economically marginalized are among these statistics as well.

Not unlike the current U.S. administration, a Conservative UK government has cut funding for domestic violence services, mental health trusts, and LGBTQ transitional programs in the past few years. LGBTQ-specific charities were cut up to 50 percent in income.

As a result, DIY and alternative women’s and queer spaces matter more than ever. These spaces combat the resilient setbacks and venture towards a new future for the UK underground where women and nonbinary people can seek refuge, community, and safety. When funding is slashed and rising costs of living are affecting all types of people across the UK, DIY spaces pop up and marginalized voices are brought to the forefront, with everyone feeling a pull to becoming an activist, especially as these spaces also serve as a safe space for people who seek queer or women-run environments.

Sisters Uncut meets every week in accessible venues with two different sisters facilitating the meetings. In 2016 and 2017, the group staged four reclamations of spaces. One of the spaces was a “former women’s prison to highlight the need for services for survivors.” They also hold workshops at local events in various regions. Emily explains that their actions are “always lively and welcoming, lots of music, free food, and childcare.” Sisters Uncut has many different chapters located all overLondon, Birmingham, Bristol, Portsmouth, Liverpool, and Edinburgh which make up hundreds up active members.

“Our meetings last for a couple of hours and we are normally discussing something we are planning to do or something that has happened in our local areas and how we want to respond to it,” Emily tells INTO. “We sometimes have guests visit and tell us about what they are doing or sharing their skills or knowledge with us. We read out our safer spaces policy at the beginning of every meeting, which sets out our expectations for how we behave towards each other within our community.”

For women and nonbinary people, spaces provided by Sisters Uncut and the upcoming Loud Women Festare lifelines. The latter, run by Cassie Fox of the band GUTTFULL, is a gathering that highlights women and gender nonconforming people in punk, pop, and indie music. The group behind the fest also run an online zine, produces live performances around London, and releases records from women musicians. Just like in the U.S. the UK-based music industry, Fox tells INTO, is “a male-dominated space, and the default musician is a male one.”

“Just this week I’ve seen a festival put a call out for ideas for a female artist to fill their final space, ticking a box in a lineup otherwise almost entirely male,” she says. Loud Women is here to amplify their voices as much as they can.

With a focused on safety and inclusion, Sisters Uncut and Loud Women Fest are providing crucial opportunities for cathartic solidarity. DIY or alternative spaces are typically where women are able to seek a space of this value. With lesbian and queer bars vanishing and mostly dominated by gay men in London, women-centric environments are vital for safe spaces. In fact, SHE Soho is the only venue in London that hosts nightly parties with DJs, cabaret, burlesque, and various other social events geared toward queer women.

Like in the States, most women-focused events pop up in mostly alternating spaces, with no permanent home, and not a nightly spot where you can just pop in for a quick drink. Queer nights for women (such as two-year-old gathering BUTCH, PLEASE! and Female Trouble, a new gathering celebrating rotating women-identifying DJs and fierce femmenes) are located in bars or locations that are not always focused on or generally welcoming to women-identifying people.

Moreover, there is a lot of debate that circulates around the idea of what constitutes as a “safe space.” In theory, the phrase promises to ensure that everyone in a venue will not abuse any form of power or harm. However, in reality, it can be difficult to fulfill, even for advocacy groups.

“We recognise that power, privilege and the ability to do harm exist in all of us,” Emily says of Sisters Uncut. “Many of us are LGBTQ+ survivors, and we are committed to transformative justice as a way to make our spaces safer and to address harmful behaviour within our community without seeing each us as disposable.”

Violence against women, nonbinary people, and members of the LGBTQ community remains at large in public spaces and is oftentimes a neglected issue. Discrimination and violence can exist in both public and private spaces. The United Nations Entity for Gender Equality and the Empowerment of Women brings up an interesting point when discussing their guidelines on how to create a safe space for women.

Of course, this is problematic as it creates a divide, as women should be able to play with men on the same ball field, or attend the same music venue, or walk on the same path without worrying about their safety. They continue that “planning and designing safe public spaces for women and girls also means analysing the various uses of public spaces, who uses them, when, and for how long.”

Another group focused on women and non binary people in the UK is Arts Sisterhood, a grassroots organization that offers art therapy classes in alternative spaces, like the DIY Space for London. Ali Strick founded Arts Sisterhood in 2016 after the direct cuts in funding for mental health services. Artists and psychotherapists teach and supervise the classes where students can find a judgement free space of sharing stories, collaborating through expression, and immersing themselves with one another. 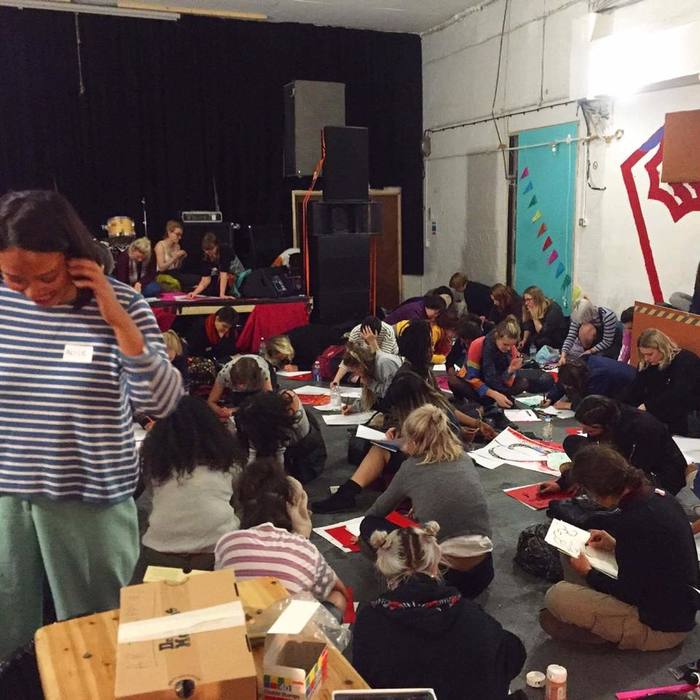 There is research-based evidence that women only spaces reduce the risk of harm for those involved in the space, and for Arts Sisterhood, students in the class are able to exchange information and find solidarity and support with one another. A 2015 study in Sociological Research Online found that women-only spaces reduced anxiety and fears surrounding their safety. According to the research, safe spaces encourage women to explore conflicts. “In such an environment, the conflicting ideas can be more fully, deeply explored, leading to a richer level of engagement, understanding and self-development,” the study says.

Moreover, women don’t have to fear the responsibility of responding to men. The Arts Sisterhood class guidelines include a “quiet area away from the class for those we are anxious,” and other alternatives when creating a space where people will feel vulnerable, sensitive, and possibly overwhelmed. The women-centric space is meant for healing and discussing trauma while working through a creative artistic practice. In order to ensure everyone’s safety, these alternative spaces must acknowledge possible outcomes or setbacks for all individuals involved.

“I’ll hold my hands up and admit I’ve made a couple of really bad bookings in the past – bands who have used our platform to promote harmful or anti-feminist messages, and brought with them unpleasant fans keen on undermining our event,” Fox says. “We’ve got a thankfully small blacklist, and we share information with other promoters we trust.”

Women-centric spaces in London are fiercely opposing any type of violence of discrimination that triggers or affects participants in their space. Their goal is to create a sanctuary of open discussion, free thought, and reinforce healing.

“We create spaces where women and nonbinary people can come together to fight violence, oppression and austerity,” Emily says.”We hold political actions, learning workshops and meetings where people can take action for their own safety and the safety of other people in their community. We also create blogs, videos and toolkits that people can use for free to set up their own activist groups and learn more about the way austerity is affecting survivors of violence in the UK.”

Despite the withering of women-friendly and focused spaces in London, groups like Sisters Uncut are offering opportunities for community and support, something that shouldn’t be so radical yet somehow continues to be.

In 2013, Naomi Wolf wrote a story for The Guardian titled, “Do We Still Need Women Only Spaces??” The answer in 2018: More now than ever.