Last night, for the first time ever, LGBTQ wrestling fans were welcomed with open arms to the grandest stage of them all when not one but two wrestlers sported pride colors in high-profile matches in the biggest WWE event of the year.

Two years after WWE Chief Brand Officer Stephanie McMahon hinted the company would be open to storylines featuring LGBTQ characters and performers in the future, and perhaps for the first time since the disastrous Billy and Chuck marriage storyline, WWE acknowledged in front of more than 78,000 people gathered in the Mercedes-Benz Superdome that queer wrestlers and fans exist, and are maybe worth more than a one-off punchline.

As a queer fan in attendance at the “granddaddy of them all” on Sunday, April 8, I settled in my seat primed and ready to holler and cheer at top volume for Sonya Deville, the WWE’s first openly lesbian competitor and currently the only out wrestler on the WWE roster. Deville in the ring often cuts a stern figure, usually in severe dark gear and tight braids that emphasize her no-nonsense MMA persona.

This time she entered the ring in vibrant white gear with a rainbow pattern, her usual braids streaked with color a look she dedicated to her fellow members of the LGBTQ community in a short video she posted on Twitter before the show kicked off.

For something so simple one night’s ring gear in one big match it made a big impact. In years past WWE has never been particularly forthcoming about LGBTQ performers in its ranks; Pat Patterson’s sexuality was an “open secret” in wrestling for years, but not acknowledged on-screen by WWE until 2014 in an episode of their original programming WWE Legends House, despite Patterson being an iconic figure in the company for decades.

Fred Rosser, previously known in the WWE as Darren Young before his startling release from the company last year, never discussed his sexuality as part of his character on-air despite coming out publicly in 2013. Aside from Stephanie McMahon’s comments about potential storylines, WWE has rarely been forthcoming about acknowledging the LGBTQ community as part of professional wrestling at all.

That’s what makes these moments at WrestleMania XIV so meaningful, if a little bittersweet — the idea that the bar has been set so low by the company’s performance in the past that the appearance of a pride flag could have such a profound impact on fans.

Deville was allowed the opportunity to represent herself and her community with one of our most recognizable symbols. It wasn’t just Deville, either: Finn Balor, a fan-favorite of the WWE community as the leader of the Balor Club and an independent wrestling legend as a former leader of its villainous predecessor the Bullet Club, entered the ring surrounded by fans proudly sporting a new LGBTQ pride-themed variant of his popular t-shirt, the same design on his gear, with massive titantrons declaring “Balor Club for Everyone.”

One of the most recognizable symbols in all of American wrestling was redone in the colors of the pride flag for the most-watched pro wrestling event of the year in the United States. The original Bullet Club is the biggest brand in American wrestling, thanks in large part to Finn Balor as one of its founders, and WWE took its version of that branding and did the last thing the notoriously exclusive and cliquish Bullet Club fan base would ever expect by proudly announcing everyone is welcome. 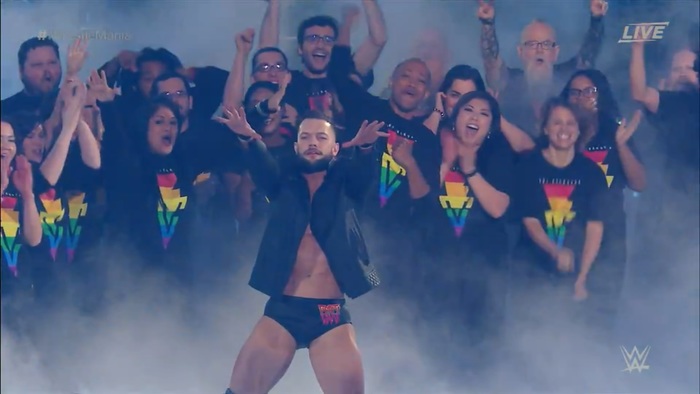 Far from a wink and a nod, the WWE and primarily Finn Balor turned to the LGBTQ and offered the warmest welcome the WWE has offered to queer fans in several years. Sixteen years after WWE essentially double-crossed GLAAD by revealing the Billy and Chuck wedding storyline GLAAD consulted on had been a sham played up for laughs, WWE is donating 20% of the sales price of the Balor Club for Everyone t-shirt to GLAAD from now through June 30, the end of Pride month.

There’s no arguing that pro wrestling as an industry and, particularly, WWE as a company have a long way to go when it comes to embracing LGBTQ wrestlers and fans with open arms. Nor was WWE the only company to make those overtures over the weekend. Openly gay wrestler Mike Parrow wrestled fantastic matches at multiple independent shows, including a show for British promotion Progress Wrestling that also featured pride gear sported by wrestler David Starr, whose often tags as the team “Sexy Starr” with openly pansexual wrestler Jack Sexmith.

Without a doubt, though, the 78,000 live fans in attendance and hundreds of thousands of viewers streaming WrestleMania was the largest audience to see wrestlers proudly represent the LGBTQ community in the squared circle this weekend. It’s a huge step for the WWE, and one that left me a little teary-eyed up in the nosebleeds, throwing my hands up in the Balor Club “too sweet” sign along with the crowd.

With luck, this is only a first step — not just a token gesture, but something that becomes as memorable and lasting as the “too sweet” itself, a simple moment of community that gets passed from fan to fan until wrestling really is for everyone, forever.