Note: This piece discusses some major plot points of A Simple Favor.

If you’ve seen the inscrutable trailer for A Simple Favor, then you probably have no idea what the movie is actually about. Directed by comedy juggernaut Paul Feig and written by queer screenwriter Jessica Sharzer, the movie is as mysterious as its trailer. It’s undefinable, switching from bouts of belly laughs to stretches of macabre psychotic breaks. I won’t sugarcoat it: A Simple Favor is a lot, but there’s a 10-minute chunk of the movie that makes it all worth it — because those 10 minutes are extremely gay.

I’ll cut to the chase: Anna Kendrick and Blake Lively make out in the movie. If queer women weren’t so starved for queer content, lesbian sex scenes, or literally any scene where two beloved actresses kiss on the mouth, then this wouldn’t be a big deal. But these are the cards we’ve been dealt, so watching Anna Kendrick and Blake Lively make out is…pretty tight.

But let’s rewind for a second.

The movie follows Stephanie Smothers (Kendrick), an irritating suburban mommy blogger who has a YouTube channel that her fellow parents hate-watch and make fun of. Her son befriends the son of Emily Nelson (Lively), a public relations executive for a fancy fashion designer in New York City — she’s one of those majestic working moms that other class moms fantasize about and also criticize for her life in “the city.” One day, Emily is forced into a playdate with Stephanie because of their sons’ budding friendship, and invites Stephanie over for a drink.

From the second Stephanie meets Emily, she is completely enchanted by her. While most straight women viewing A Simple Favor would recognize the way Stephanie swoons over her as a “girl crush” — that thing straight people apparently develop for Instagram models who vacation on the Amalfi coast — queer women will recognize the moment for what it is: being swept off your feet by an elusive bisexual. Emily oozes sex appeal, and she does it with purpose. The hallmark of her living room is an enormous painting of her own bush, which frightens Stephanie, who has clearly stifled a queer part of herself for years. Emily weaponizes her sexuality wherever she can — it plays a large part in her twisted, maniacal schemes, and it grips her husband Sean (Henry Golding) by the ballsack.

Watching Blake Lively in this Echo-Park-hat-lesbian-looking role is rapturous. If you’re a queer woman who grew up in the 2000s, you’ve probably always been besotted by Lively. For me, it feels like I’ve waited a lifetime to see her in this role, where she sports fashionable lady suits, openly hits on women, makes grisly quips about her cocktail of anti-depressants, and demands Kendrick stop apologizing after every sentence: “It’s a bad female habit.” And Kendrick meets Lively’s aggressive sensuality by being markedly uncomfortable, visibly intimated, and reeking of desperation; the deft comedic timing we’ve come to know from Kendrick shines bright in A Simple Favor. Stephanie just wants Emily to love her and think she’s cool — which, like, same — and it’s adorable and hard to watch, all at once.

Fast forward to one fateful day in their short-lived friendship. Emily asks Stephanie for “a simple favor” — to pick up her son from school. Obviously, Stephanie enthusiastically agrees to do so, but then Emily goes missing as the victim of a suspected homicide. Because Stephanie is so bewitched by and obsessed with her, she takes it upon herself to solve the mystery behind her enigmatic friend’s disappearance. Halfway through the movie, amidst Stephanie’s risky search for the truth, the aforementioned gay 10-minute section emerges.

We see a flashback to one of Emily and Stephanie’s boozy playdates, which often consisted of Emily womansplaining how to make a proper martini and manipulating Stephanie into spilling her darkest sexual secrets. But one bright afternoon, Emily gets Stephanie particularly tipsy and plants one on her. Stephanie kisses her back, feeling herself and the moment for a bit, but eventually pulls away, feigning shock at her behavior.

Emily plays it down like it’s no big deal, and calls Stephanie nauseating pet names like “baby” and “sexy.” Stephanie, however, apologizes for being drunk, but we can see the gay panic in her eyes: This is clearly something she’s always wanted to do, and a boozy playdate with the adult version of Serena van der Woodsen was the perfect opportunity to unleash her inner gay. Unfortunately, Stephanie’s crush went missing soon after, leaving her to pick up the pieces.

Stephanie begins realizing that Emily hasn’t been telling the truth about her past, or about anything really. In an effort to collect more information on her, Stephanie pays a visit to the painter of Emily’s living room pussy portrait — a college-era ex-lover who Stephanie originally thought was a man — but as it turns out, it was an ex-girlfriend, who’s played by Linda Cardellini. The best part of A Simple Favor is that the movie gives two actresses the chance to play the roles they were literally born to play, one being Lively’s goddess-like Emily, the other being Cardellini’s Diana — an art lesbian with a half-shave and a dark side. 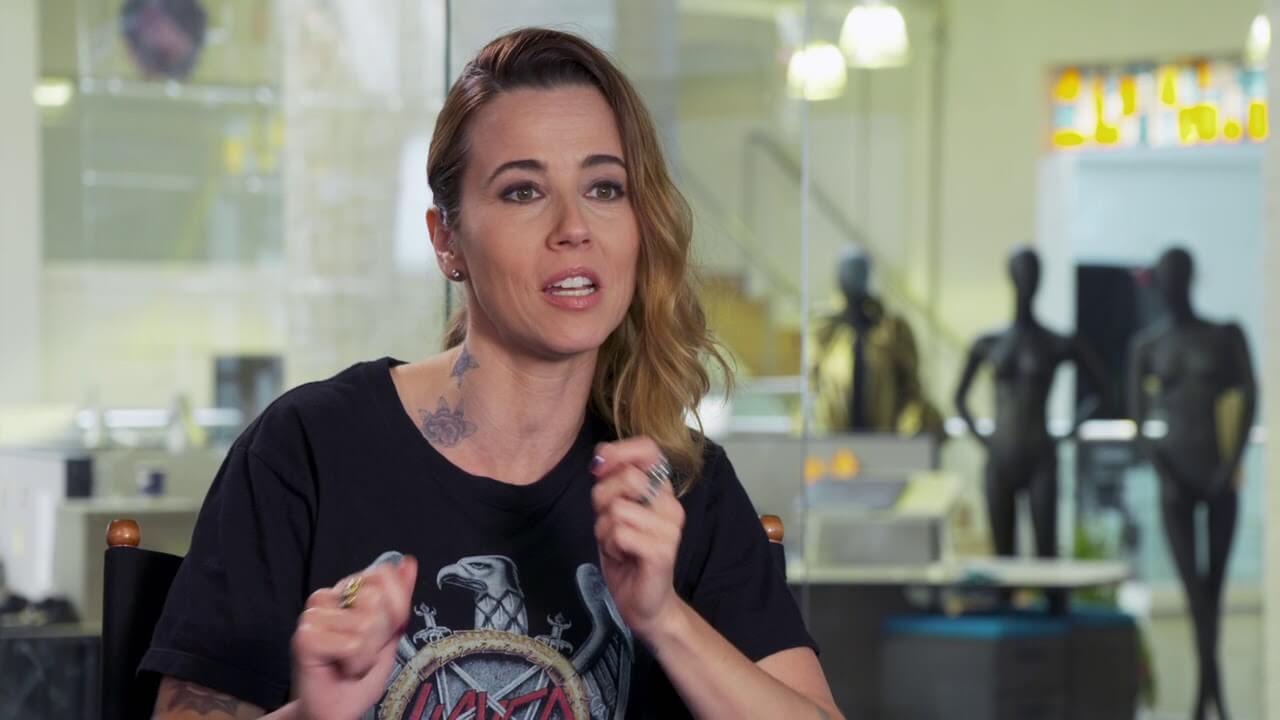 Emily was Diana’s muse when they dated in college, but Emily fucked her up so bad that now all she can paint is portraits of knives. While holding a dagger and bashing her ex, Diana tells Stephanie that Emily isn’t normal “like us,” which Stephanie rightfully blanches at. All I’ve ever wanted is for Lindsay Weir to be gay, and this is finally the Linda Cardellini lesbian role I’ve been waiting for. She’s twisted, obsessive, and holds grudges — which is maybe not the most progressive portrayal of a queer woman, but a very funny and watchable one.

A Simple Favor will take you through twists and turns on a fiery trail down bisexual psychopath hell, and while the plot itself might be lost on some, it’s worth a watch for its queerness.