I’d chosen the salon solely based on its proximity to our apartment and the fact it opened at 8 a.m..  I was the only customer there and I felt exposed sitting on the raised chair, cape around my neck. The stylist approached in the mirror, tall and slim, in a form-fitting black dress and reddish-orange lipstick.

“What are we doing today?” she asked in a slightly raspy voice, with the echo of an accent.

This wasn’t just because I’m generally clueless with my hair. What I wanted wasn’t tangible. I was there for a blowout but what I wanted was strength.

I met Mitch when I was 35. Over the course of our first three dates, we discussed marriage, having kids, and the fact that Mitch was seriously considering transitioning from female to male. Five months after we’d shared our first kiss, he began hormone replacement therapy and we traveled across the country for his top surgery. We bought my engagement ring on that trip, as he was still bandaged and woozy from pain meds – it’s a nice ring. 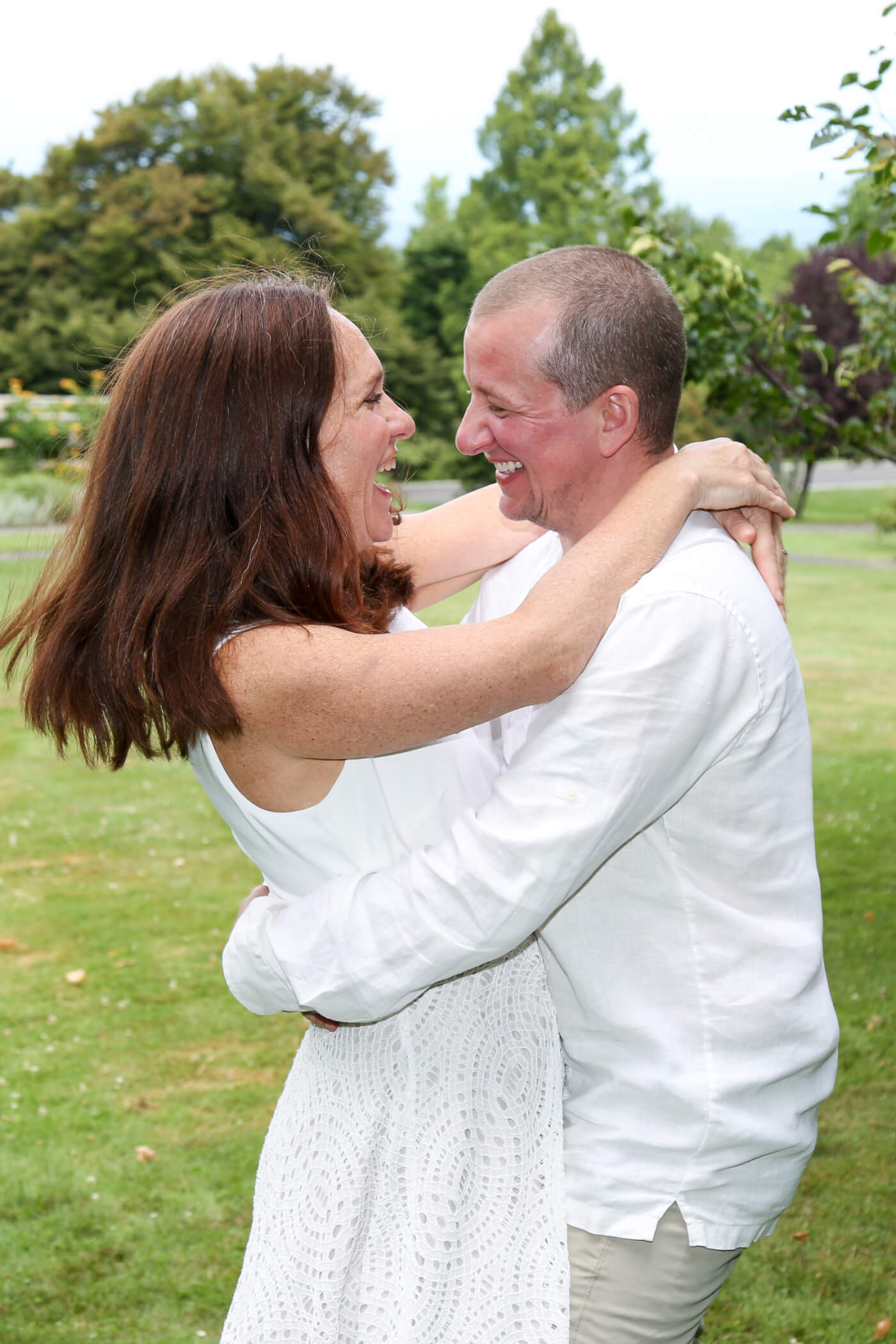 In a typical non-typical pattern, marriage and kids followed. I got pregnant using a known donor, a dear friend of mine, who lived across the country and was thrilled to be a part of creating our family. Then for our second child, we used his husband.

In our new parent world, we found ourselves somewhat buried in the closet. We didn’t start off with that intention, but as new friends became closer, it seemed so hard to change course, as if it had jumped from too soon to tell to too late to. At times, it felt like we were living two separate lives, one where we happily consorted at queer parent events, or hung out with our old friends, talking freely about everything, and the one where we bonded with straight parents, while side-stepping questions about who the kids really looked like. Every time, I shrugged and said “I guess they look like a lot of people,” a little part of my stomach curled into itself.

Then, through a contact at our LGBTQ Center, we were contacted by a national magazine, wanting to interview us as part of a segment on transgender identity.

We considered the implications for our children and ourselves. This wasn’t just coming out, it was coming out on the internet, the modern-day equivalent of etching something in stone, and a stone that people can not only harshly comment on but can throw back at you. On top of that, Mitch wasn’t out at work, nor did he think they would be particularly supportive. His job provided our entire income and health insurance; losing it would have been devastating.

But not only did this feel like an important personal step, but we believed that sharing our story was important, that putting our life out there could make things easier for others. We both came of age in the early ‘90s, having never seen a representation of queer family, and we believe representation does matter. And as a white, middle-class couple, living in a liberal center with a supportive family, we certainly had enough of a “privilege cushion” to make the risks less terrifying. So we said yes.

If I was going to come out on a national forum, the least I could do was look pretty, so I booked a blowout — which is how I’d ended up in the salon on the morning of the shoot, being asked a question I didn’t know how to answer.

I looked closer at the woman behind me with a glimmer of wonder, and felt like the world was hugging me. I told her I just wanted to look natural, but prettier. I wanted something that would look good on camera.

“What’s it about?” she asked as she began to do my hair.

There’s something intimate about having your hair done; the physical contact as a brush moves through your hair, fingers brushing skin next to your face. So in between the roar of the hairdryer, I told her.

“I’m transgender, too,” she said, softly. I nodded. And then I started to cry, just a few quiet tears tracing my cheek. I couldn’t think of anything more perfect than being made beautiful by this transgender woman. It seemed too much of a coincidence to be taken lightly. As her fingers and hands grazed my scalp or cheeks, it felt like she was imbuing my waves with power.

I went home, did my make-up in the bathroom mirror, and then sat down for the camera. Mitch and I were each interviewed alone, then together. We sat at our breakfast table, my hand snaked across to meet his, and we talked.

When it was over, I expected to feel a surge of panic, but I didn’t. It felt like something had cracked open. Somehow saying to the camera and to the world that I was proud of my family gave me permission to be.

After the interview, it was like a gate opened. We told friend after friend, some of whom were surprised, others who weren’t. I started to share more on Facebook and write essays about our family, which eventually led to another video interview, for which I got another blowout. But that time, I didn’t need the blowout to protect me. The second video was of our whole family, including the kids and our two donors. Seeing the flow of our lives together felt like a gift, this full holler that this was us, and we were lucky and loved. 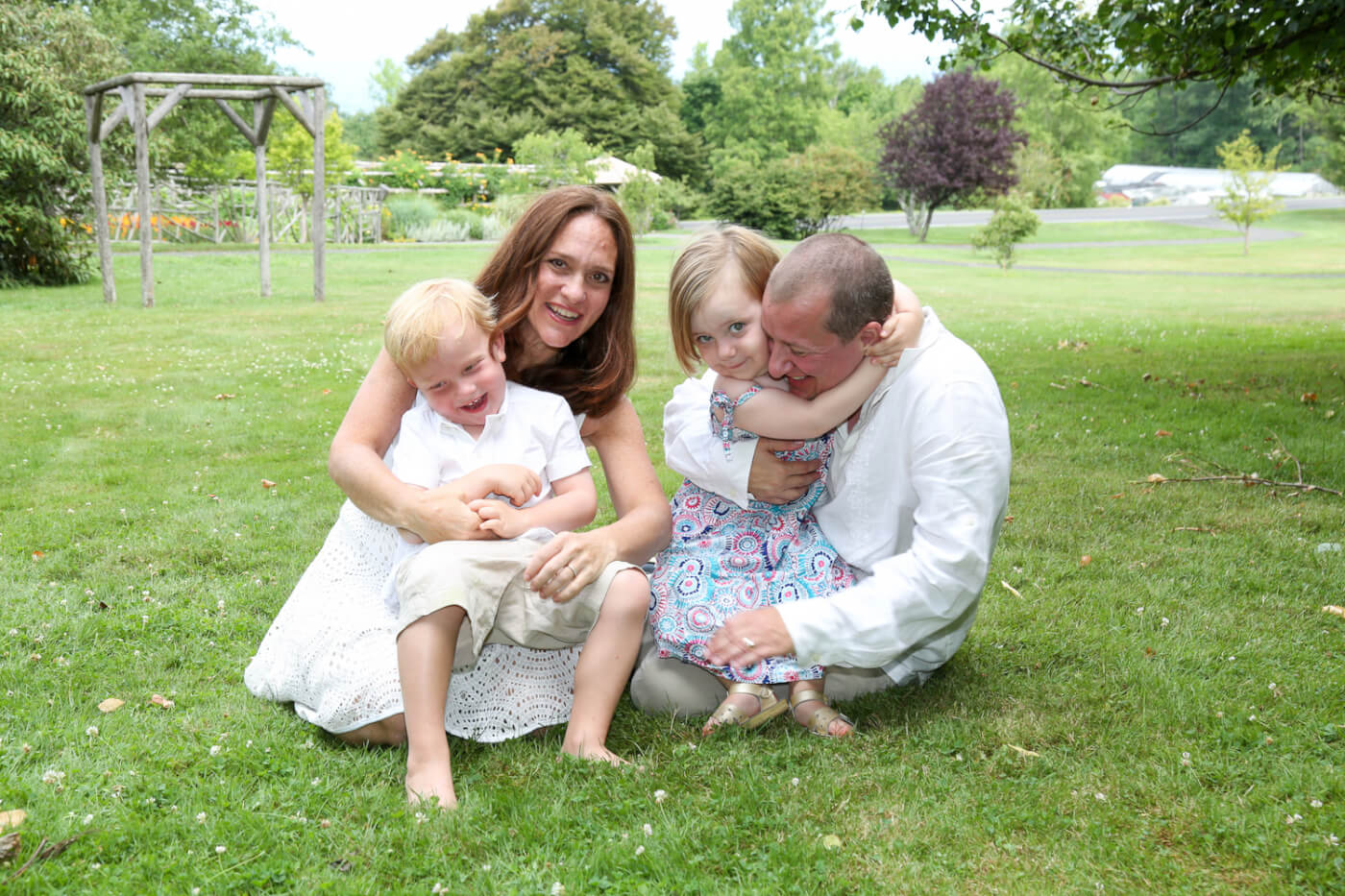 That didn’t mean it wasn’t still hard and scary. The internet trolls still posted vomit emojis, called us child abusers and offered to pray for our souls. But friends from far and wide also posted messages of support, as did strangers who thanked us for sharing and tried to educate the ignorant. But I stopped reading the comments, because I didn’t want the negativity to grab hold again.

I’ve spent too much of my life worrying about what others think of me. As a parent and partner, that didn’t change, and focusing that worry on what other people thought of me, my husband and our family, had a nasty side effect of making my gaze hyper-critical and defensive. When you focus on looking for flaws and chinks in your armor, that’s all you can do.  I don’t want armor anymore. It’s so heavy and exhausting. I don’t want my kids to ever know what it feels like. The world might still try to weigh us down, but I’m going to try my damnedest not to add to that weight.