As gay as everyone knows Miami to be — more than likely thanks to Mike Nichols’ gleeful film The Birdcage — South Beach was a place that only offered certain kinds of pleasures. There’s the kind of drag you get on television, the kind of gay male-oriented parties that offer nothing but muscle boys and twinks, and not an ounce of focus on the kind of world I wanted to be a part of. I was gay, that was certain, but the gay lifestyle presented to me was unappealing.

My hopes for Miami were different. I wanted the sun setting, a pink hue over the streets of Miami. It would be the kind of lighting that set up a seductive tone for a night of pleasures that I and many others would exist in for hours. There would be bodies intertwining, voices whispering, and light flickering. It would all take place inside of a room whose four walls were made entirely of stained glass: a space known as the Jewel Box.

Club Jewel Box was a nightclub in Miami Beach in the 1940s, created by Danny Brown and Doc Benner, that presented female impersonators to visiting audiences. As a program notes, “their shows have been known for their clean production and outstanding costumes, young, fresh and good performers.” But the Jewel Box was more than a performance space. 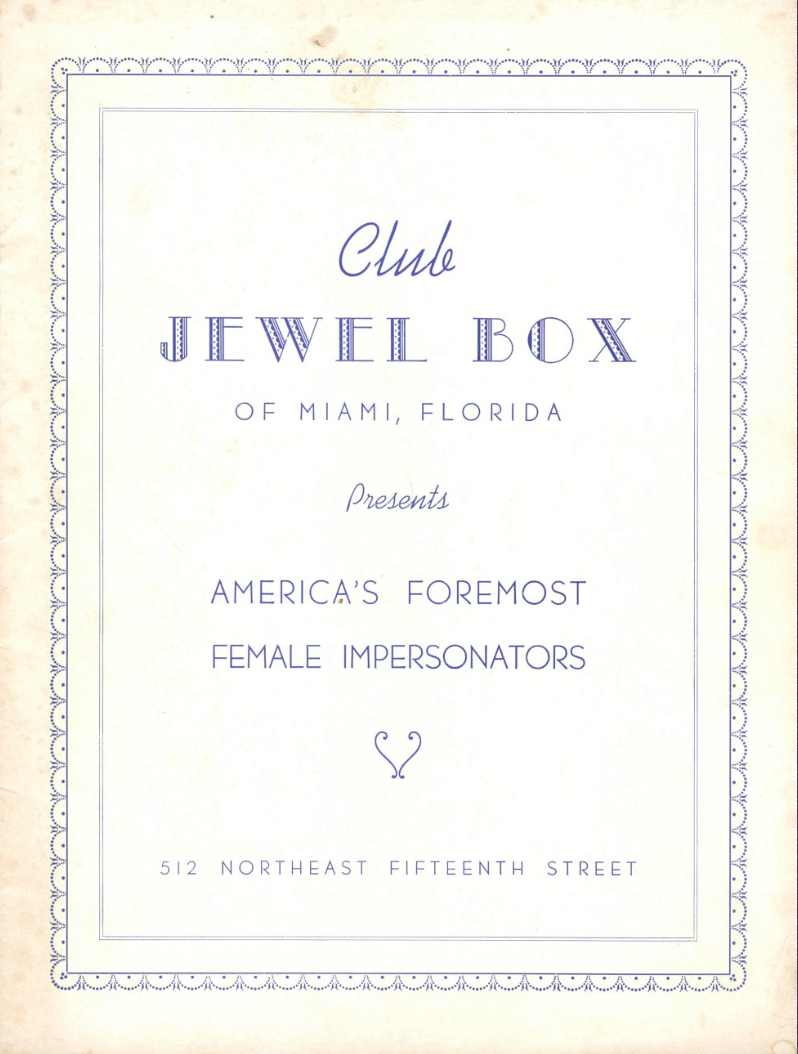 As Wayne Anderson explains in his Huffington Post piece, they were queer men who had created a family in their revue, fighting hard to keep the space open until its closure in 1952 (and then continuing on as a tour). They were passionate about having drag seen as an art form and not simply as a burlesque show, and they fostered an environment where queer people could flourish, not only as performers but as people who would go on to help the queer community.

Take, for instance, Stormé Delarverie, an African-American lesbian and drag king who would later be known by some as “the Gay Community’s Rosa Parks” for her role in the Stonewall rebellion in 1969. The Jewel Box playfully billed itself “25 Men and 1 Woman” and Delarverie was the one, spending decades living, working, and traveling with Brown and Benner prior to her life as an activist.

The Club Jewel Box of 2018 was an entirely different experience, though the ghosts of performances long past lingered in the air. Club Jewel Box, as my friend Trae DeLellis and I recreated, was a one-night installation celebrating queer poetry, performance, and cinema. It was a celebration of Miami’s queer past, present, and future, as well as a cruising space where six films were showcased and enhanced by visual and aural performances. 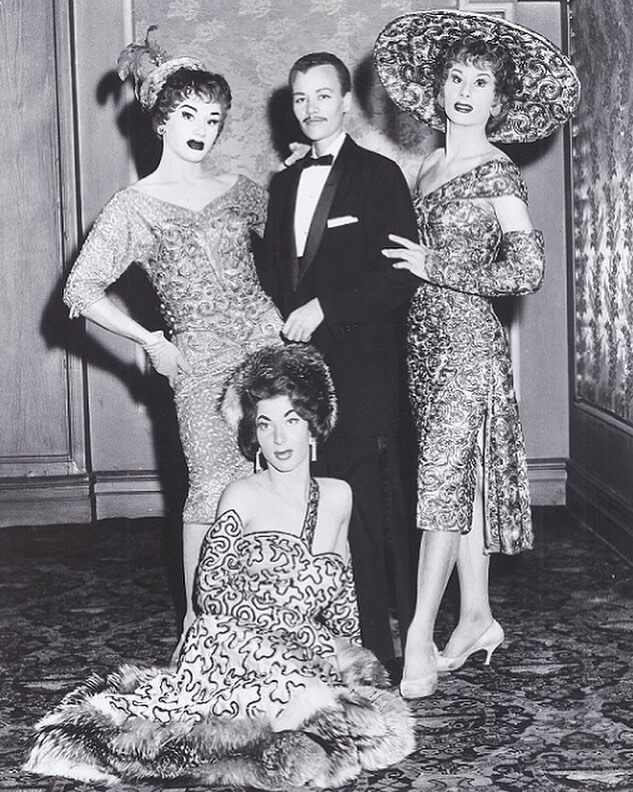 It was meant to be a night exploring desire, anticipation, and eroticism. For me, it was a night that embodied everything I’d wanted to do in my city since I was a younger queer person who wished there was art out there made specifically for him. Art that would transport me to a world I felt at home in.

This was my big complaint: Where was all the stuff I wanted to see? I stumbled headfirst into it when I met all of the fascinating people that were creating Miami’s unique queer scene. Performers who ignored the standards of gender presentation, whether that was a bodybuilding drag queen, a drag king who specialized in creating heavily phallic immersive performances, or a drag performer whose relationship with identity and gender led to fascinating performance art pieces (from cutting “FAG” into their body on stage to becoming a living, breathing mattress for hours on end).

These were people who embraced an alternative image and were comfortable with themselves because they had a community that supported them. Individuals who were taking over traditionally heteronormative spaces and making them their own, even if it was just for one night a month at a party like Counter Corner.

But this wasn’t enough for me. And it wasn’t enough for those I knew who also had an interest in film. Another complaint arose: Why weren’t the movies screening here the kind of movies I could find myself in? Why was I forced to attend endless repertory cinema screenings that involved nothing but straight men watching movies made for them? I shouldn’t have felt uncomfortable in my favorite space – a movie theater – while watching Boogie Nights, where a man chose to loudly yell at and make fun of Philip Seymour Hoffman’s queer character when he is rejected. So we said, “Fuck it. Let’s make a film series.”

Our series was named Flaming Classics, inspired by the Alexander Doty book of the same name, centered around queering the film canon. That book, along with Vito Russo’s The Celluloid Closet, taught me that if they wouldn’t put me in movies, I was going to find myself and claim them as my own. And we were going to give performers the opportunity to do the same, recontextualizing the films by creating their own unique performances themed to the work on screen. We could shove ourselves into the films made for straight people and watch as unsuspecting viewers came in expecting a simple movie screening and ended up experiencing a show they’d hopefully never forget. 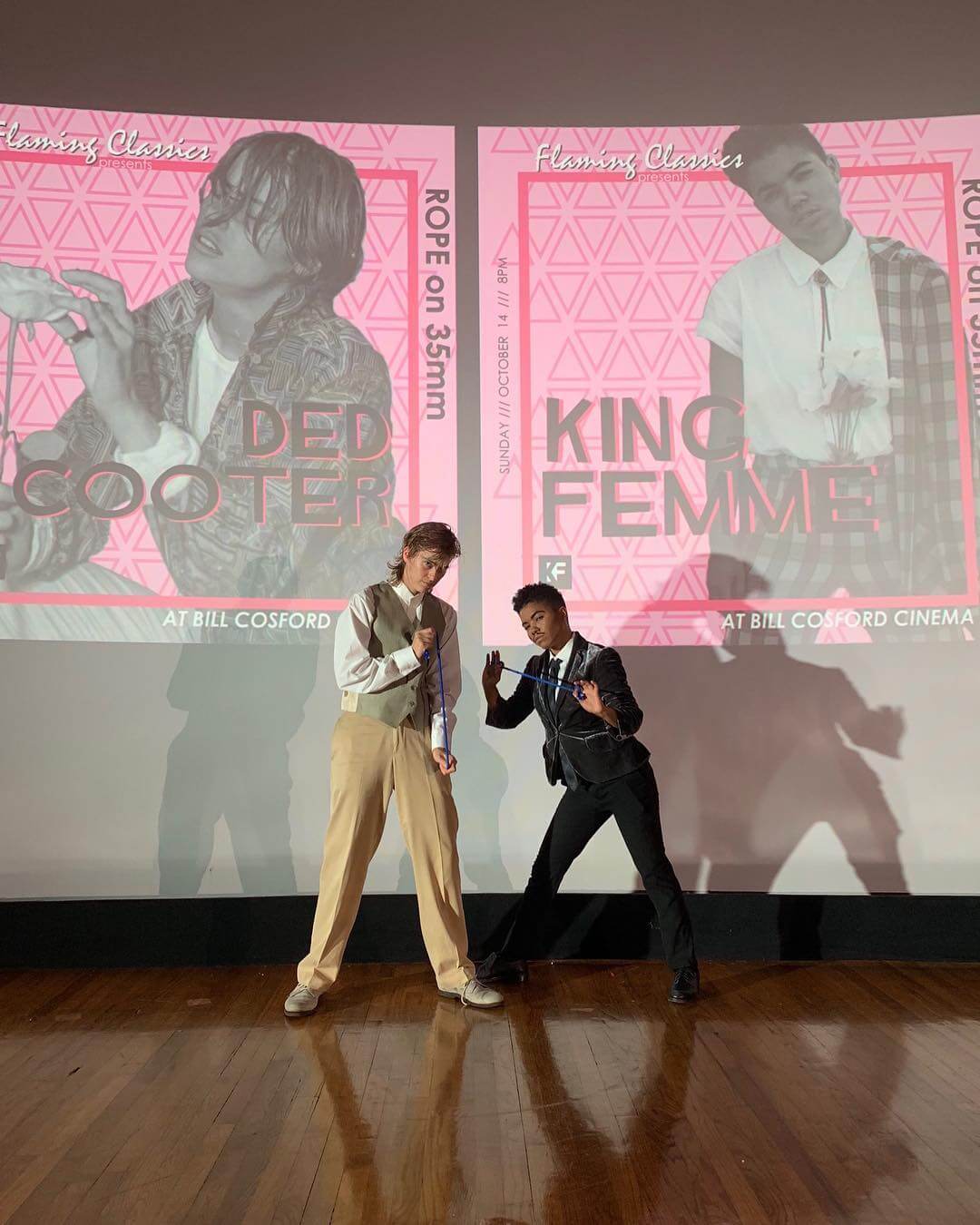 The light of a 16mm projector reflected beautifully in the eyes of audiences, watching a woman dominating another woman in Mano Destra. Just below where Barbara Rubin’s Christmas on Earth was projected, a queer body laid enveloping within a stained mattress, a performance art piece that would come to life sporadically as the night went on.

You could open a door and find someone dressed as a sailor, standing in haphazardly placed bushes, stroking the phallic stone object they’d pulled out of their pants. The poetry of Langston Hughes filled the air, as read by one of our performers, and the voices of numerous local queer poets boomed over a speaker, their original work entrancing a large crowd. 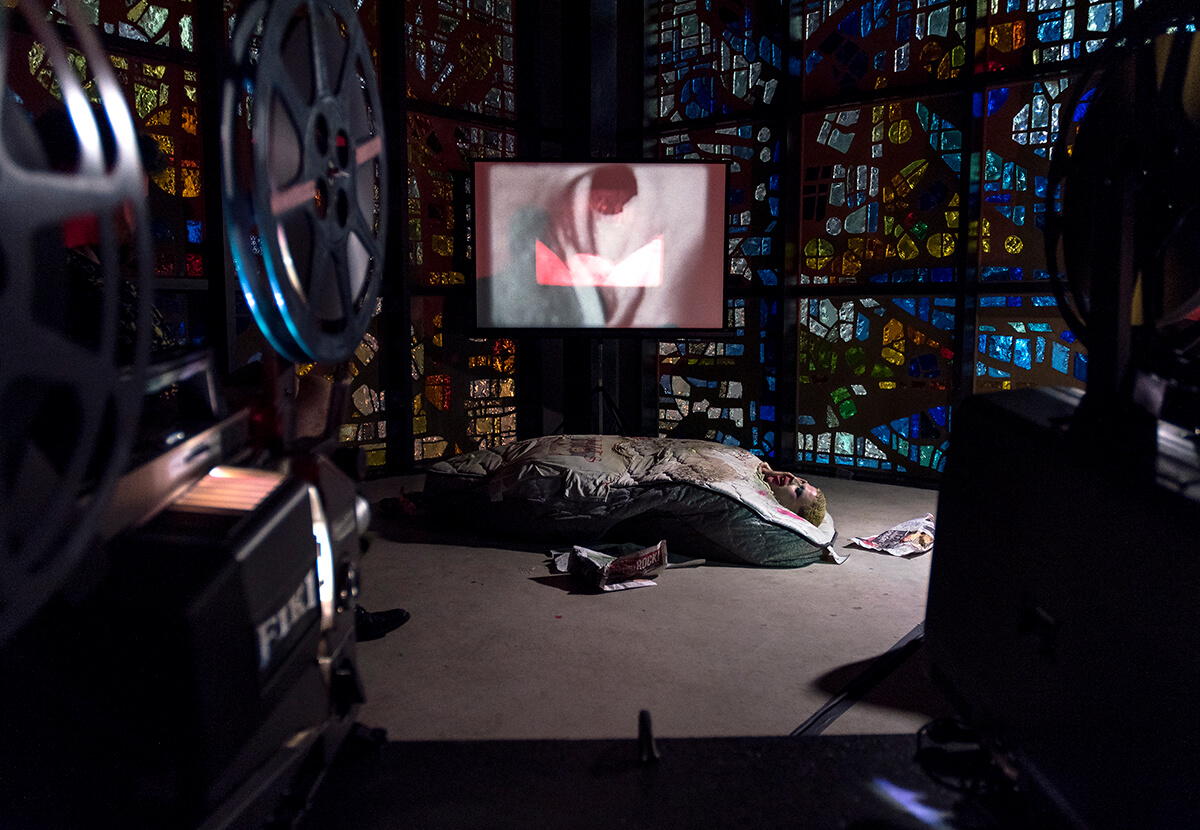 For over a year now, I’ve been doing Flaming Classics — showing films like Gentlemen Prefer Blondes and The Little Mermaid and Velvet Goldmine — but it never felt truly perfect until the night of Club Jewel Box. The years I’d spent complaining had come to an end and it was because I learned that change comes if you make it come. And maybe some queer teen who felt that Miami was as unfulfilling as I did years ago could show up to this place and realize that there was a world out there where he felt at home.

I found a queer family in the people who helped me build Flaming Classics: my partner-in-crime Trae DeLellis, who built it from the ground up with me practically a decade after we met on Scruff and talked about our mutual adoration of Martyrs; performers like Captain Midnight, Ded Cooter, Jupiter Velvet, Miss Toto, King Femme, Kunst, and Opal Am Rah, all of whom contributed to creating a space that was safe, sensual, and surreal in equal parts; and even the queer writers outside of my city who have shown me new ways to look at film, like my frequent collaborators Kyle Turner, Willow Maclay, and Caden Mark Gardner, the last of which wrote thousands of words on the art shown during Club Jewel Box for our guests to read.

With Flaming Classics, with Club Jewel Box, with my queer Miami peers, I found myself. It may have taken over a decade of awkwardness, of bad experiences in various spaces, of never really knowing who I was, but I was there now.