There are always several flags draped over the fan section railing at Houston Dash games. They often change from season to season: an Irish tri-color one is switched for a South African flag, an English banner added in between as players are traded and shuffle between teams. Various colors and designs represent different groups, communities, or countries, reminding players and fans alike that all are welcome inside the stadium. But one flag, perhaps the brightest of them all, stays put: the rainbow flag for LGBTQ pride.

This year, Dash players brought the flag onto the field, donning those rainbow stripes on the backs of their jerseys.

National Women’s Soccer League (NWSL) teams across the country are recognizing their LGBTQ fanbases through hosting Pride Nights and donating proceeds to related charities. This kind of LGBTQ visibility largely emerged in 2015, when most teams celebrated the Supreme Court’s ruling in favor of same-sex marriage. While the community has always had a large presence at games, official support by team management advocates for the inclusivity of the league. Every NWSL team but one had an official Pride Night this year in June, and various teams increased efforts to demonstrate their support for the LGBTQ community.

In comparison to other professional sports leagues, the NWSL ranks among the top for acknowledging the community, with teams hosting Pride Nights as early as the league’s first year in 2013. The WNBA followed, launching the first-ever national Pride campaign in 2014, marketing specifically towards LGBTQ fans. While certain MLB teams have hosted Pride games for over a decade now, and NBA teams are now joining the push, the NWSL’s unique combination of visible campaigns as well as player advocacy sets it apart from other leagues.

The Houston Dash debuted jerseys with rainbow numbers on the back this year to auction off to benefit PrideHouston, which hosts LGBT charity events as well as the annual parade in the city. The game-signed jerseys raised more than $12,000. 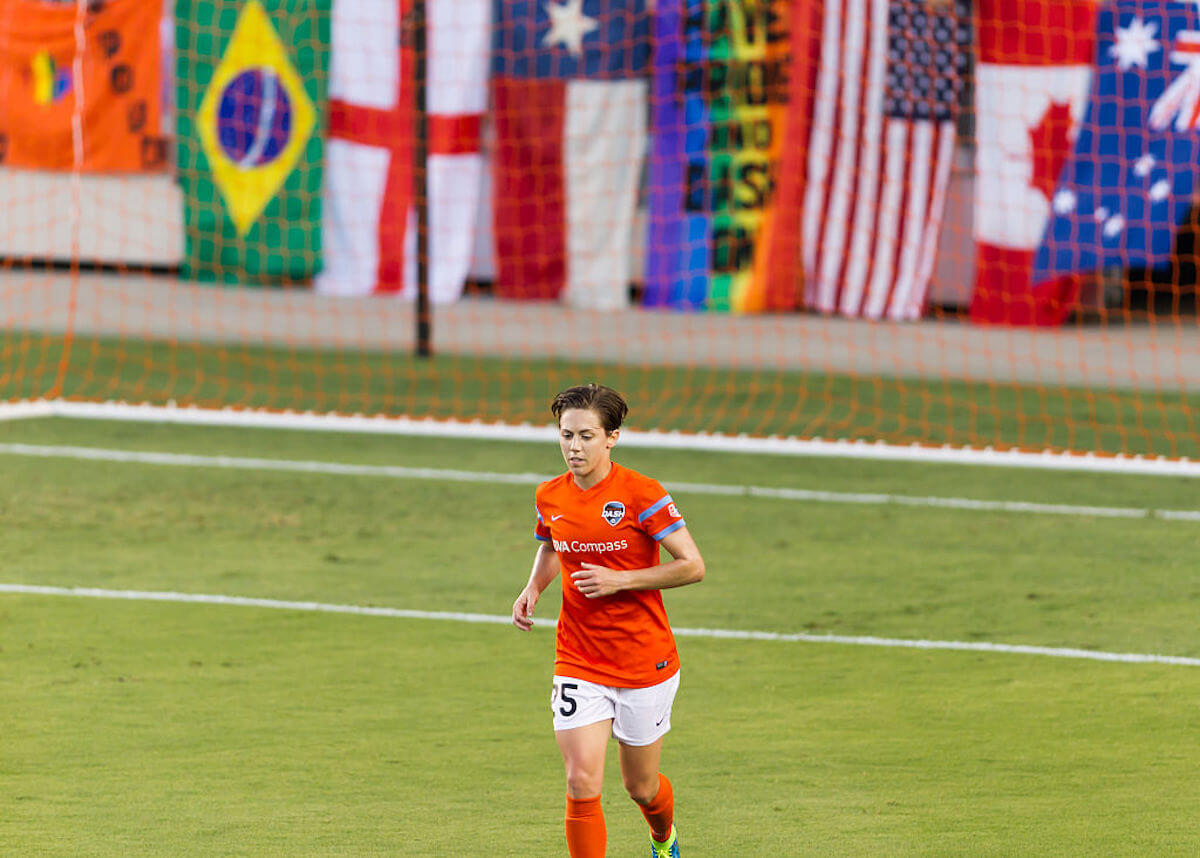 “For me, when I was in high school and younger, not as out or not as comfortable with myself, seeing rainbow things meant the world to me,” Dash fan Cat Taylor said. “I also liked that the Dash chose a local organization because the biggest impact you can have is donating to some of the small organizations that deal directly with the LGBT [community].”

The Dash partnered with PrideHouston as an official event for the first time, kicking off Pride Weekend with a themed soccer game. Tickets purchased through a special package also included a donation to the organization.

“We had the game on Friday night, and we actually had girls out in the parade and the festival on Saturday,” Houston Dash spokeswoman Valerie Holland said. “It was really showing how we could have a partnered relationship where it’s not just one-sided. It’s building a partnership with them which is something that can last now for years to come.”

The Utah Royals, a newly established team, hosted a Pride Night in their first year of operation. While the Real Salt Lake franchise was founded in 2004, it wasn’t until they brought in a women’s side this year that the other teams, Real Salt Lake of the MLS and Real Monarchs of the USL, began hosting Pride Nights. The three teams created history by hosting the first Pride-themed events of any major sports team in Utah.

“I think that says a lot about who we are,” Utah Royals spokeswoman Carla Haslam said. “I like to think that since we were the first, that it inspired or encouraged other teams to do the same.”

The Royals also debuted rainbow jerseys, some of which were auctioned off to support a scholarship fund at the University of Utah for LGBTQ students. In August, Royals forward Katie Stengel, who identifies as an ally, wrote about how soccer taught her to be compassionate toward a community she’s not a part of. 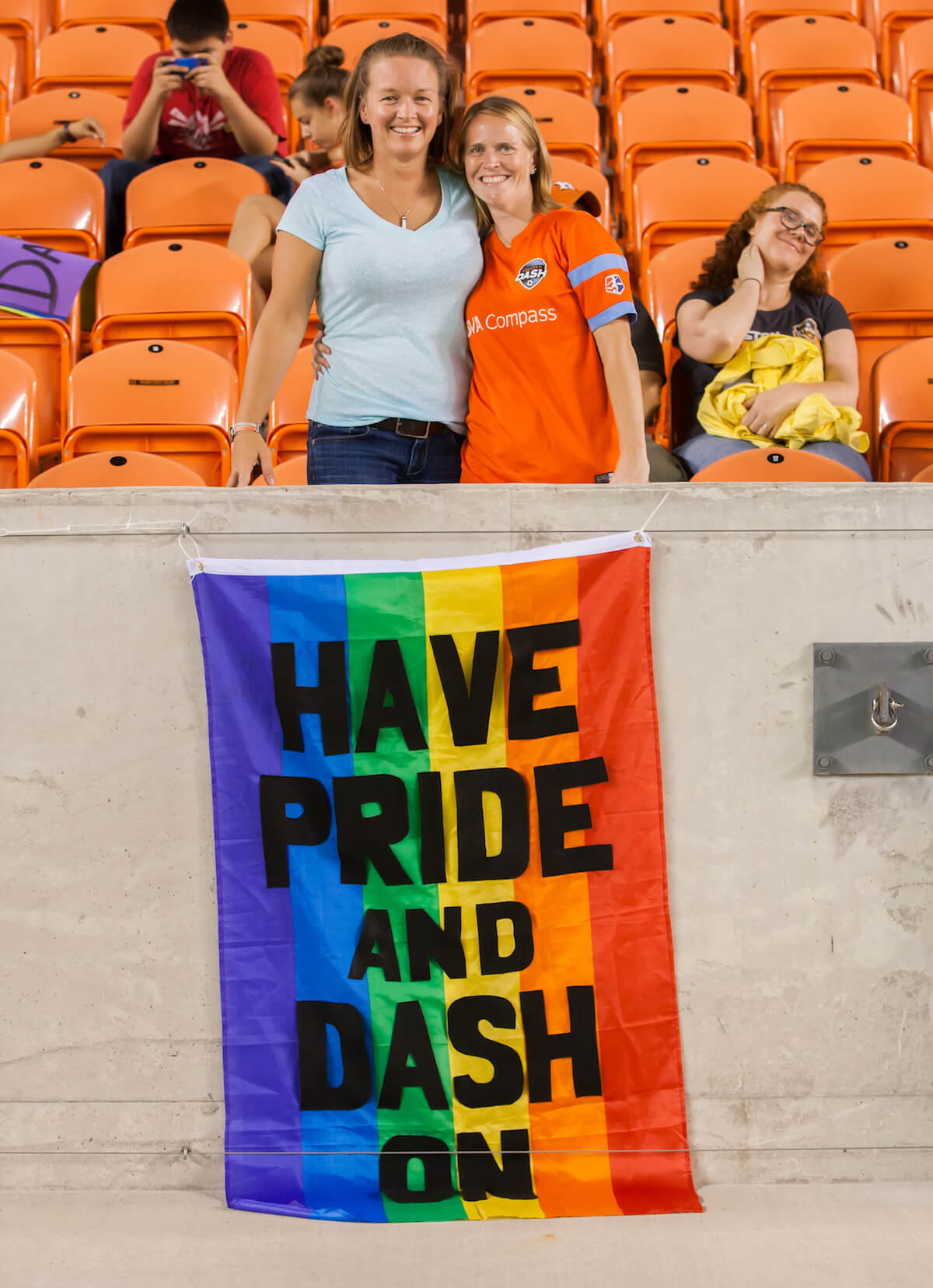 In Florida, the Orlando Pride first wore rainbow jerseys in 2017. This year, they added a franchise-wide campaign called Pride in Our City, which honored the victims of the Pulse nightclub tragedy. Tickets purchased through the campaign included a donation to one of five Orlando-area LGBTQ nonprofits, most of which were established following the shooting at Pulse.

Similarly, on the West Coast, the Portland Thorns partnered with Basic Rights Oregon and LGBTQ community hub the Q Center, while Seattle Reign donated to the Greater Seattle Business Association Scholarship for LGBTQ students. Both the North Carolina Courage and Sky Blue FC extended their celebrations, with the Courage hosting a Pride Week and Sky Blue hosting two themed games in partnership with the Pride Center of New Jersey. The rainbow trend also popped up on the Chicago Red Stars’ warm-up tops, which feature colored numbers that were auctioned to benefit You Can Play. The project aims to ensure the inclusion of all athletes in sports.

“We want every fan there to feel that representation,” Chicago Red Stars Strategic Insights Manager Bryn Raschke said. “We want to go out there and visibly show it and make sure everyone feels welcome the same way.”

In 2018, where teams haven’t gotten involved, fans have stepped up. The Washington Spirit were the only team without a designated Pride Night. So the Spirit Squadron, the supporters’ group, hosted their own celebration as they have for the past couple of years. Out players on the team such as Joanna Lohman pushed for support for the community, finally getting the front office to acknowledge the theme by painting rainbows along the field.

“For us, it was kind of an automatic thing: we have to have a Pride Night,” Squadron member Courtney Buchanan said. “We have a huge population of queer folk in the Spirit Squadron. We joke that the straights are the minority, because it’s one of the few places where we can be and we’re the norm so it was really important for us and also some of our players to be able to celebrate that. [The organization] painting the rainbow symbols on the field, it truly makes us feel welcome, and it makes us feel like they want us there.” 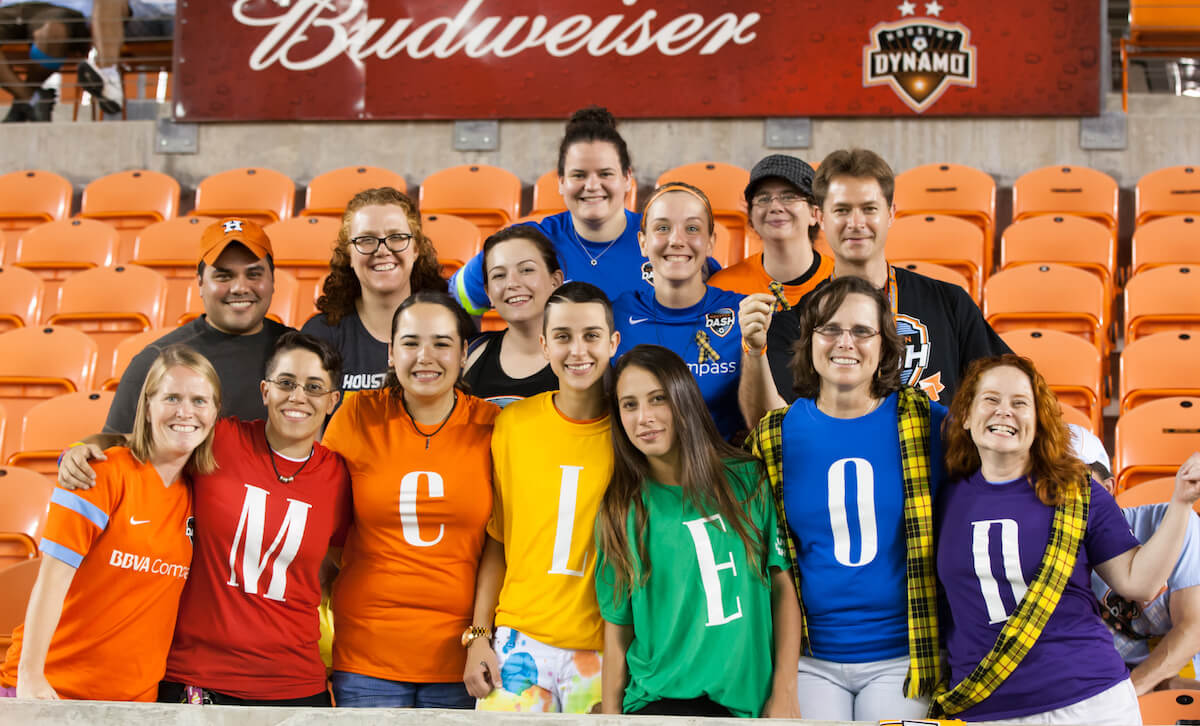 Players are also pushing for the inclusive environment. This year, 25 NWSL players teamed up with Playing for Pride, a fundraising campaign in which donations were broken down per game played, assist and goal. The Royals led the campaign with the most player-ambassadors, which included Stengel and US national team co-captain Becky Sauerbrunn. By the end of Pride Month, the player-ambassadors had raised more than $20,000 for Athlete Ally, a nonprofit aiming to end homophobia in sports. Professional athletes who openly identify with the LGBTQ community add to the acceptance fans feel when they walk into the stadium.

“It’s about using my career as something bigger than scoring goals,” said Spirit midfielder Lohman, who came out publicly in 2011. “I want to use my platform as a voice for people around the world who are forced into violence because they don’t have the same privileges I do and they don’t feel safe to be their own authentic self.”

For many fans, out players, in particular, serve as role models. Athletes including Lohman and Seattle Reign and US national team forward Megan Rapinoe, who came out publicly in 2012, inspire others by normalizing their vocal presence. 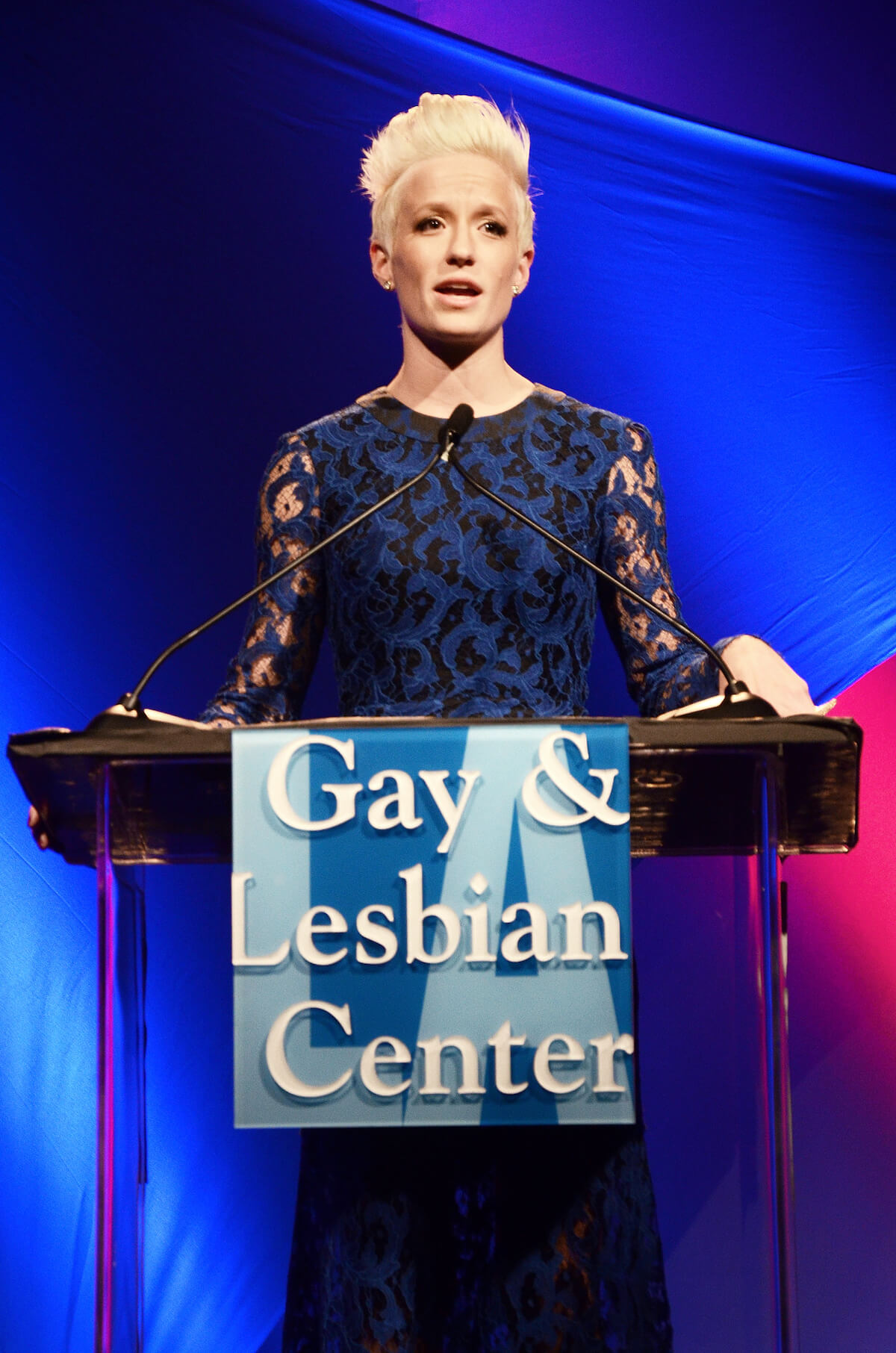 “[There are] so many people that we can look and say, ‘Oh yeah they’re the same as me’,” Buchanan said. “They fit in and it’s OK, it’s not this terrible awful thing because for some of us that’s all we’ve heard most of our lives.”

The NWSL also is uniquely open; fans and players interact in ways not found in other leagues. Players are known to stay after matches to talk to fans, some even learning each other’s names.

“The connection between fans and player and what that represents, there’s no other league or sport that does it quite as well,” said a Houston Dash fan named Cara, who did not want her last name published. “The accessibility between the fans and the players is unparalleled across any other sport, and the dedication the players have to it means you can make a connection with them.”

The constant presence of rainbow banners and flags even outside Pride Month, along with the close relationships between fans and players foster the loud and proud atmosphere at games. For some, the stands represent one of the few safe spaces where they can be open about their sexuality.

“I had just come out to my family [when I] started to get involved with Dash games,” Cara said. “Having an environment that’s loving and supporting was a really important thing to have just starting to come to terms with everything. Now I’m more comfortable with myself than I ever was or than I ever thought I could be and more confident, and getting to see that with the players and their support of it, there’s no words for it.”

Some fans attribute that strong connection between athletes and fans to the bold empowerment of female athletes.

“Any time you see women being strong in various roles, it definitely resonates with a lot of people who are not necessarily recognized in most of mainstream society,” Dash fan Taylor said. “One of the things I’ve noticed is that any time there’s large groups of women who are willing to be themselves, you’re going to gather more LGBT people.” 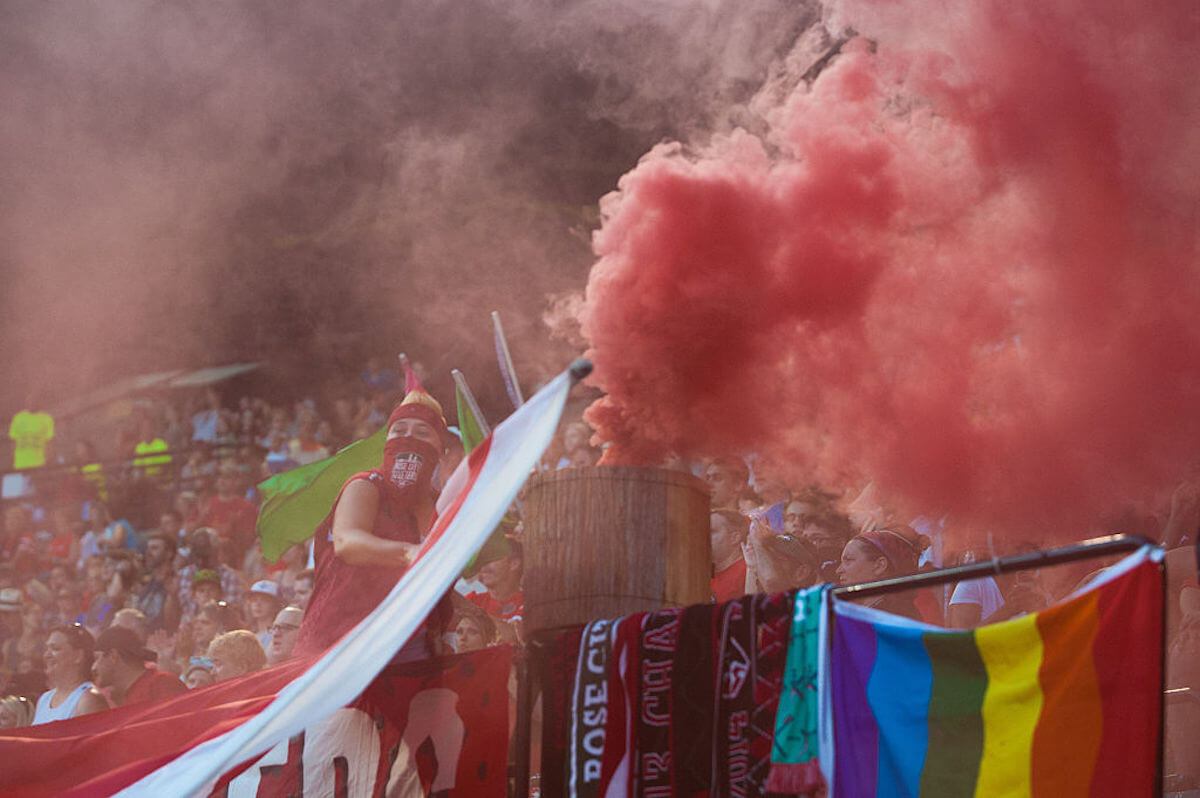 While promotion and support has grown since the founding of the league, fans see room for improvement by making the themed events consistent across teams. The rainbow numbers are a popular way of creating visibility on the field, though only three teams have adopted it thus far. Other fans wish to see backing for the community outside the colorful marketing, such as gender-neutral bathrooms.

A recent controversy involving Jaelene Hinkle of the North Carolina Courage seemed to fall contrary to the inclusive mindset the NWSL has embraced, according to Thorns fan Jo Thomson. Hinkle spoke to Christian news outlet 700 Club at the Courage stadium on her decision to withdraw from US women’s national team consideration because she did not want to wear a rainbow jersey for Pride Month.

“I find it distressing when the Courage invite 700 Club to their stadium to come do a feature on [Hinkle]. You don’t have to be a member of the LGBTQ community to know that it’s a homophobic program that espouses a homophobic agenda,” Thomson said. “As a governing body I think the NWSL could step in more often and say ‘You know what, I don’t think that’s an appropriate news outlet to be covering our team.’”

However, the trend upward of support by large sports teams is creating optimism not just for LGBTQ fans, but the community as a whole. Though the 2018 season has wrapped up, fans hope the goodwill between the NWSL and the community will catch on with other sports leagues.

“Every year it’s getting easier to be who you are,” Sky Blue FC fan Brittany Reggiero said. “It feels great to be a fan of a team who accepts you and loves you no matter who you love. I think it’s gaining a lot of ground and the future looks bright.” 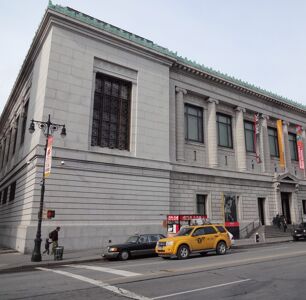