Last May, I received an email from my alma mater, The University at Albany – SUNY. It said that I was being honored with The 2018 Harvey Milk Alumnus Award, an award given to an alum who upon leaving the university has made substantial contributions to social justice issues in their work and/or community involvement. In addition to this already huge honor, I’d be delivering the keynote at their upcoming Lavender Graduation ceremony for LGBTQIA+ graduates, their family, friends, and faculty members.

Just a few short blocks from my old campus is the juvenile detention center I spent a year in when I was 15 years old. It was a really important reminder of where I was coming from as I struggled through the stress of multiple jobs and exhaustion during my last year as a non-traditional undergrad, only five years earlier. As I heard my bio being read and walked across the stage to accept my award, I couldn’t help but think about how much had changed for me.

I stood at the podium and looked out into this audience, full of antsy graduates fiddling with their rainbow tassels, and I started to reconsider how prepared I was to show up for them in that moment. I was reminded of my 2013 Lavender Ceremony when I was barely present for the keynote speaker and having intense anxiety about what it would mean for me to wear my rainbow tassel at the next day’s commencement.

There I was, in one of my most visible moments, trying to figure out just how visible I had the strength to be. I threw caution to the wind and decided to take agency over the impact my shrinking could have on their well-being. What am I, if not a genuine testimony to perseverance and the power of fresh starts? This is what I shared with them: 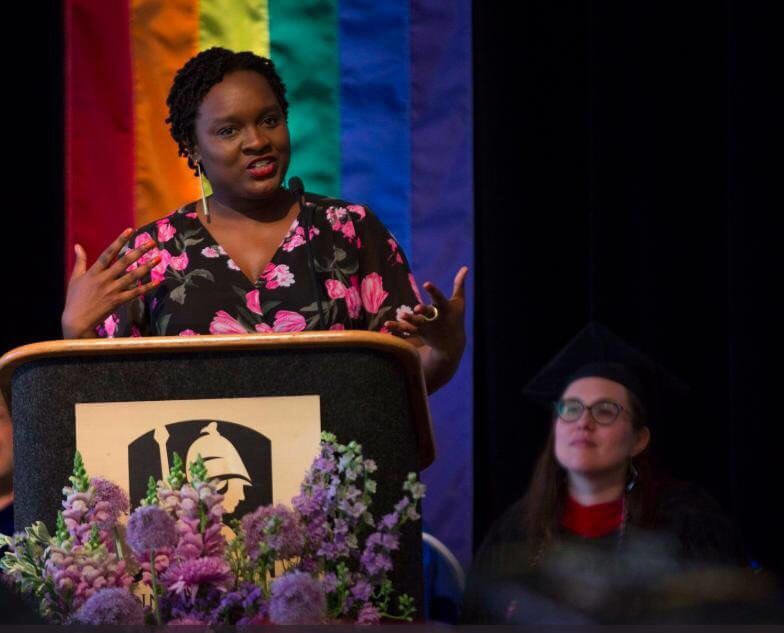 I’m very honored to be here with you and truly grateful for this opportunity to share in your celebration of hard work and achievement. Now, I’ve clearly Googled all of the popular keynote topics for graduation celebrations because I wanted to make sure I did it “right,” the way the real pros do it.

A few hours ago, I scrapped all of the notes and pointers, had a minor panic attack and remembered that I do “real pro” really well — I’m professionally authentic. Every Sunday I record my podcast and the premise is simple — get on that mic and tell folks the truth. So, here we are, now bear with me as I share a few thoughts and hold back tears, simultaneously. Forgive me, I’m a Virgo.

I’ll start off by revealing to you that this speech is a full circle moment for me and a valuable benchmark for the theme of my wide-ranging journey. In fact, I can clearly point to three really significant moments that served as necessary catalysts for the glow up standing before you… May 2013, October 2014, and February 2017. Each an instance of thwarted self-sabotage, a routine really that starts with some well-established self-doubt followed by a “Well, what happens if I just…” and then the action in question. Now, I can add May 2018 to my list of significant moments because in all honesty, upon receiving the email to come here I did the thing I always do — doubt, challenge, and then act — true to my imperfect process.

May 2013: Our Lavender celebration was wrapping up and I was completely preoccupied with my plan of action for when my estranged family would arrive a few hours later. I had grown accustomed to being out of contact with everyone and avoiding questions about the particulars of my current life or preferences, so I wanted to make sure I had my cover stories prepared. I was avoiding the girl I’d been seeing, rushing to get home and hide my award and rainbow tassel and figuring out what other “gay” stuff I needed to suppress. I had finally realized that Albany was my “What if I were really me?” life and I’d been living in the guise of anonymity since I arrived. I had made one really close friend, Ryan, who shared my interest in late nights and hot wings but otherwise was pretty much the opposite of me. She was close to her family, straight, had kids and never doubted anything I wanted to do. She urged me to consider just “being my amazing self” when they arrived and one, I was still figuring out who that was exactly and was unprepared for a 101 on it. Two, Jamaicans love a heteronormative white picket fence trope and this clearly wasn’t it.

Yet and still, I opted for the controversy and wore the tassel, fielded questions about “being a gay,” internalized my mother’s embarrassment, and spent the next year wishing I’d just thrown it away.

October 2014: I’d randomly pitched some stories to a prominent online magazine for queer and trans women of color and was invited to become a contributing writer. I hadn’t written publicly since my days at the GSRC when Courtney D’Allaird tasked me to create our first zine and provided the first platform for my developing voice, so I was sure I bit off more than I could chew. I started to respond to the email with some excuse about realizing my lack of experience and not wanting to disappoint, then realized I was doing it again: Shrinking. I pulled my handy routine off of sabbatical and declared to my mother and sister that I was a lesbian and would be sharing my journey with the world. My mother apparently had her share of disappointments and decided to go her separate way — and my sister shortly thereafter. Needless to say, I’d spend the next few years writing through a narrative of half-truths in order to sustain a falsehood that my mother might someday click on and be proud of.

February 2017: I recorded and published my first episode of The SafeWordSociety Podcast, an archive of living and thriving as a queer person of color in NYC. I’d doubted, challenged, and acted myself to that point but had grown a lot since my early days of dabbling in authenticity and really wanted to start taking ownership of my narrative. As a queer black woman in America, where each of my intersections is portrayed as less than on a daily basis, I made equity building a priority for myself. Out of necessity and for the sake of my mental health, I needed somewhere to exist as a whole person, always-in-progress and still enough. I quickly discovered that there were others seeking that space and our weekly listenership has stretched to places like Uganda and Uzbekistan.

Every day since then has been about activating visibility for LGBTQIA+ communities of color, existing on the banks of erasure and creating spaces for people to tell their own stories. I live and work through the boundlessness of these communities and am a better person every day because of it. I’ve committed to leveraging whatever privilege I have as an educated cis-woman to make room for those identities who rely on allyship for survival. Today, I am unapologetic in my mission, fierce in my loyalty and very proud of my journey.

Moral of the story and probably one of the greatest lessons I’ve learned thus far: DO NOT SHRINK. Visibility is about more than being out there in the world — start by being visible to yourself. Show up for yourself every day in a way that fills you up. Decide you’re worthy of more than doubt and push yourself to the challenge but don’t rush. When you’re ready, as only you can decide, act. Remind yourself each day that in your life, you are the magic. No matter how many times the world tells you otherwise, there are people like me working very hard to prove them wrong. Thank you. 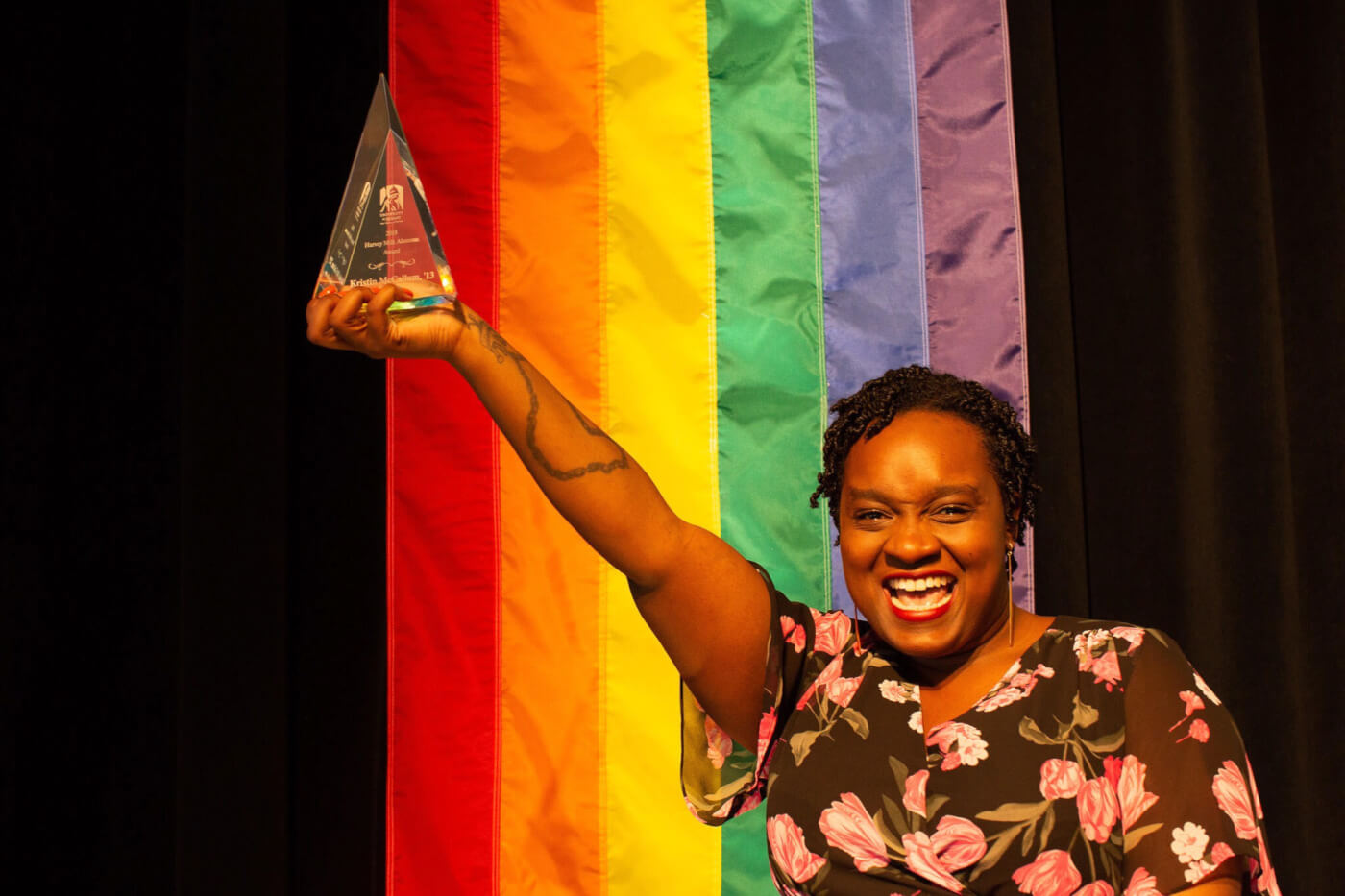 My speech was met with two rounds of standing ovations, many wet eyes — including my own — and some truly earnest affirmations. It was an honor to serve as an example of the possibilities that existed outside of our collective trauma as a chronically invisible population. Cheers to the bridges we are all building over the quicksands of our pasts.