One of the most defining gender characteristics, voice, often gets overlooked in technology and medicine, but new advances in voice therapy may help transgender people feel more like their true gender.

While hormones may help some people change their voice, they don’t work for everyone. But new research shows promising options in coaching and speech therapy for transgender people whose voices don’t change after hormones. The research sessions used biofeedback from voice frequencies shown on computer screens to help participants modulate their voices.

Actress and advocate Delia Kropp, 61, tried all the traditional hormones for transitioning male-to-female, including estrogen, progesterone and testosterone blockers.

“As with all trans women, these made no noticeable changes or feel to my voice,” she said.

But Kropp, who lives in Chicago, wanted her voice to match her gender, not only to experience less misgendering, but also to help with her career. She self-trained her voice to sound more feminine using YouTube and books, and she took lessons with theatre voice coach Kate DeVore.

“To some [my voice] reads female, to others it doesn’t,” she said. “It’s largely a challenge on the phone, where I am repeatedly misgendered. Professionally, my voice can be a challenge for acting female roles. I have yet to develop a convincingly female voice for the stage because the size, dynamic range, and power required to hold an audience’s attention for two hours does not brook feminization well [for me]. When auditioning for cisgender female roles, this sometimes holds me back.” 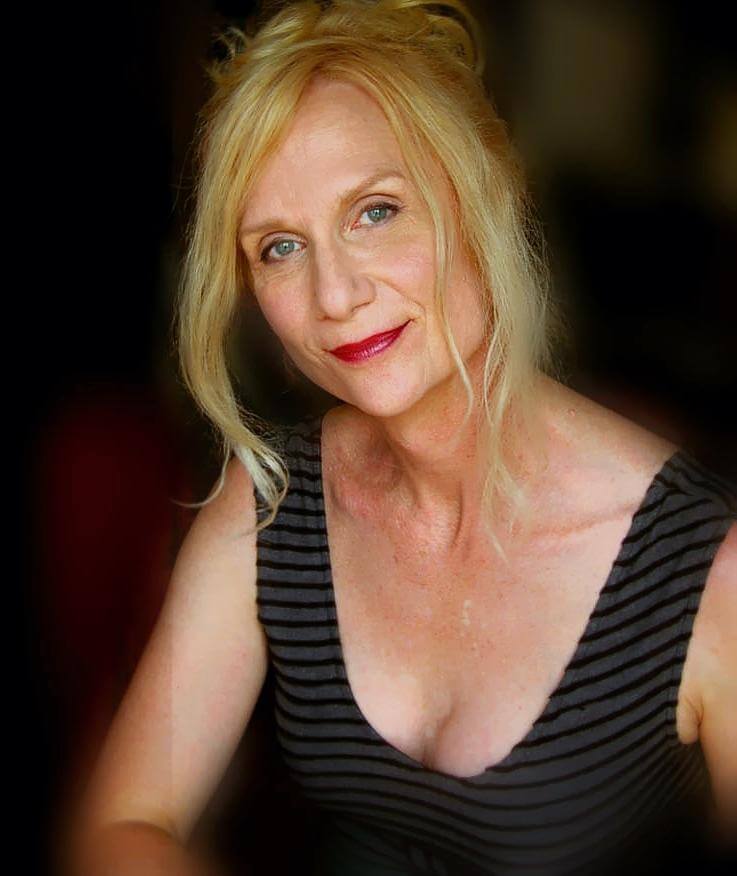 Kropp transitioned her voice with the help of a vocal coach and self-teaching, after hormones failed to help. She has since contributed to a professional vocal coach manual.

Many transgender people have similar experiences due to their voices being different than what’s considered traditional for their gender. But voice and speech therapy often go uncovered by medical insurance. However, research at New York University shows the success of new vocal training options.

The study, published in the Journal of Voice, documents how NYU speech pathologists Deanna Kawitzky and Tara McAllister helped transgender women raise their voices to a more feminine tone.

The study used visual-acoustic biofeedback, which relies on microphones and computers to help people see the frequency of their voices on computer screens. Frequency refers to how often the sound wave vibrates. The more it vibrates, the higher and more feminine the sound. Frequency can be changed by reshaping mouth motions, but this can be difficult.

The study compared the voices of 12 transgender women and 19 cisgender men. Initially, the transgender women produced a slightly higher voice than the men, but the difference was small. Both groups naturally produced a more masculine voice range.  But seeing voice targets on screens and sessions to practice reaching those targets helped produce change.

Participants spoke vowels in the contexts of short words, such as “bat,” into a microphone, and their pitch formant frequency, or resonance, was shown as a wave on a screen. The participants were given a target that approximated the average vowel frequency of a cisgender female. They were asked to try to match that target by manipulating their resonance. The biofeedback would show how close they came to reaching the target. Finally, after attempting to reach the higher frequency multiple times, the participants were asked to say the vowel with their eyes closed in order to try to get the words to sound less stretched out and more natural. 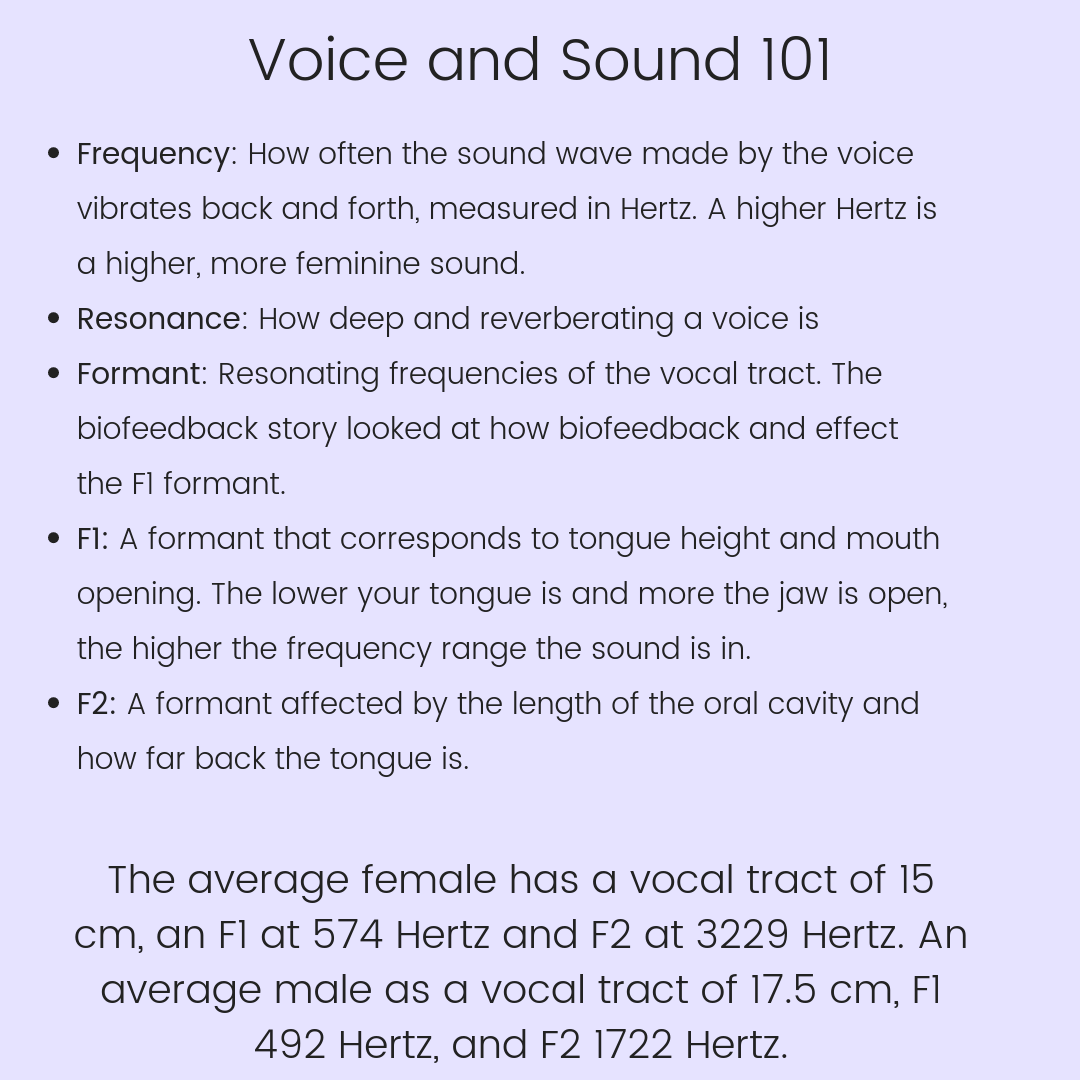 The study measured formants, which are frequencies controlled by the movement and position of the vocal tract. Changing the movement of the mouth can make the voice sound higher or lower.

In the end, the trans women were able to significantly shift their frequency formants to better match the biofeedback targets, and blinded listeners rated the words produced with higher frequencies as “more feminine” sounding. Frequencies are controlled by different vocal trace movements positions.

Biofeedback is traditionally used to monitor vitals like heart rate, but this study shows it has the potential to change how transgender people modify their voices.

“Research on transgender voice therapy has been limited but is expanding, and we’re excited to have identified a new direction with biofeedback,” study author Kawitzky said.

Transgender voice training is a relatively new branch of voice therapy, but it can help transgender people feel more confident in their gender presentation.

“I came [into NYU] knowing I wanted to learn more about the intersection of voice and gender and methods for transgender voice therapy as a way to help trans people find a voice that matches their presentation of their gender identity,” Kawitzky said. “When I became a research assistant at Tara’s Biofeedback Intervention Technology for Speech lab, which studies the use of biofeedback to change speech patterns, we decided to collaborate on this study as my master’s thesis.”

Though the field is just beginning, it’s also growing. Adrienne Hancock, a speech pathology associate professor at George Washington University, has dedicated her research to transgender voice and communication, and has watched the field grow throughout her career.

“When I came to work at GW, I started teaching voice and working with voice disorders, and I realized that the clinic at GW had a lot of trans people working on their voice,” she said. “There wasn’t a lot of research on that at the time in 2005. It’s growing a lot. 2011 was the first time that voice and communication was included in the factor in the Standards of Care for the Health of Transsexual, Transgender, and Gender Nonconforming People Care Guidelines.”

Before biofeedback, transgender voice training relied on tactile perception, or how it feels when the person speaks, and also on auditory perception. This study shows that biofeedback can add another dimension to voice training by helping the patient visually see how their voice works, and what they can do to change it. It also gives people the opportunity to train their voice from home, or practice between sessions.

Despite this progress, work still needs to be done to help all transgender people access this kind of care.

“I think utilizing technology would be helpful to provide the services more through telehealth, long-distance ways, and improve overall access to this care,” Hancock said. “This is a problem right now particularly for trans people, and particularly marginalized trans people, like trans people of color or trans people with socioeconomic challenges who may want and benefit from voice and speech modification, but they can’t access it for any number of reasons.”

Those who can’t access a professional voice therapist can also turn to vocal coaches. In Chicago, a music instructor works with transgender singers to both modify their voice and become confident with the voice they have.

Hodges, an LGBTQ advocate, started offering this service after he was invited to workshop with ResonatE, Chicago’s transgender choir.  He said he sees trans people wanting their voices to change instantly, but for most, it doesn’t work like that. Instead, it’s a slow, personal process.

“I’ve worked with trans men whose voices dropped quickly, and some take a long time,” he said. “I love using the second puberty illustration because just as in puberty, everyone did it at different times. When you’re transitioning, there is no timeline. Everyone’s body absorbs hormones differently and adapts to them differently.”

Actor Donnie Cianciotto of Staten Island had a very high voice before he started taking hormones in 2012. Hormones quickly made changes in his voice, but it took him six years to gain control of the changes.

“The doctor I had at the time put me on what is considered twice the average dose of hormones because my estrogen count was particularly high,” Cianciotto, 38, said. “The first thing that it did was it affected my range where I could only speak two or three notes. I couldn’t speak very high or very low.”

With the more limited vocal range, Cianciotto felt like he had lost control of his voice and could no longer engage in one of his passions: singing.

“For the first two and half, maybe three years, I couldn’t sing at all,” Cianciotto said. “There was no ability. I would go to sing a song I had been singing all my life, and I couldn’t do it. You could definitely tell there was a difference there as it was adjusting. It lasted a really long time.” 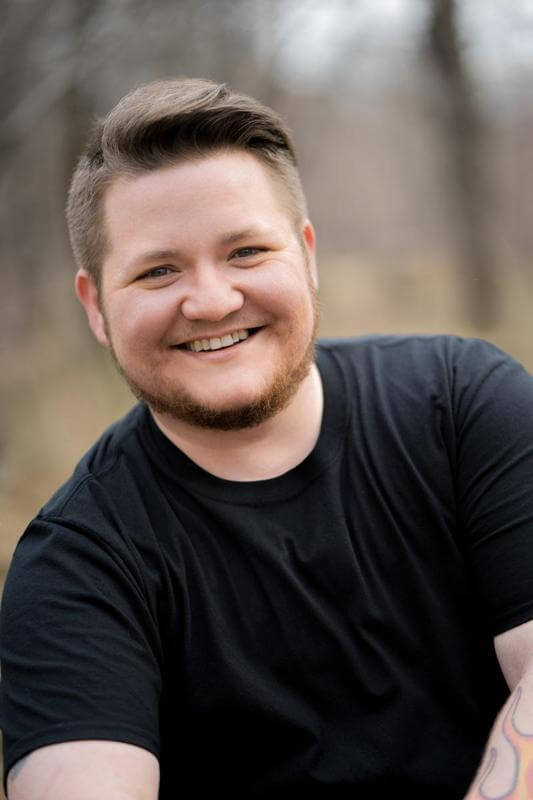 That’s where vocal coaching comes in. Hodges helps transitioning vocalists find the center of their voice, or a natural, comfortable place to sing, and warns them that singing in the wrong vocal range could cause vocal injury.

Cianciotto said that after taking vocal lessons, he finally feels comfortable with his singing voice, but the process of getting to that point was not easy.

“It was hard emotionally for a hot minute because even though I hated my [pre-transition] speaking voice, I loved my singing voice,” he said. “When it went away, I was afraid it was never going to come back. I had to stop performing because I couldn’t sing. It was traumatic to lose this thing that I’ve had my whole life.” Now he’s training to sing with the new voice he has.

Because the vocalist’s natural voice may not be the voice desired, Hodges reminds his clients that their voice is beautiful no matter how feminine or masculine it sounds.

“Yes, I’m a vocal instructor, but I’m also a confidence booster,” he said. “When you have a trans man whose voice isn’t transitioning the way they want it to, it can be very emotional because they want the whole package. They want society to see them as a man. If I’m working with a trans man and the voice is high, I let them know that that’s their voice. Your voice doesn’t have to be anything but yours.”