Women’s fashion and lifestyle brands have long sought to earn that highly-coveted pink dollar, but rarely have they cared to cater to those who might not want to wear feminine cuts and silhouettes. Instead, how about a fitted three-piece suit? A pair of joggers? Jeans that aren’t “borrowed from your boyfriend,” but instead, created for women and nonbinary people’s bodies, and a concentrated effort to reach an audience ignored by traditional advertising.

Some fashion houses have become less gendered and more accessible in sizing and what they consider womenswear vs. menswear, but fewer have created more options and fostered more goodwill than Wildfang. The Portland, Oregon-based brand (named after the German translation for “tomboy”) launched in 2012 after co-founder, CEO, and CMO Emma McIlroy left a cushy job at Nike with her then business partner and co-founder Julia Parsley to launch what would become a highly-successful queer-owned and inclusive feminist-leaning company peddling clothing, accessories, and other wares. (Parsley has since left amicably, no longer looking to work in fashion.) Their online shop and early investments helped to create their flagship shop in Portland, which was followed by a second and just this year, New York and Los Angeles locations (Soho and Silver Lake, respectively.) 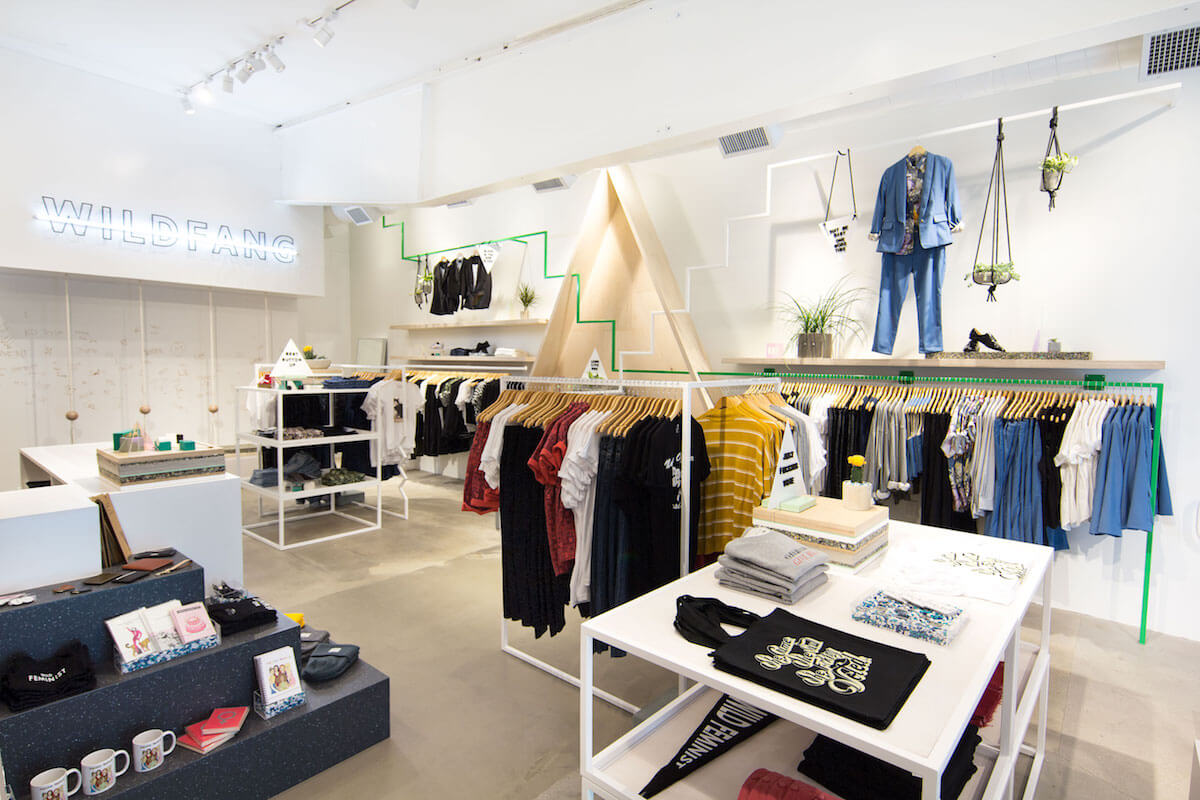 Their Wild Feminist slogan Ts, The Future is Fluid campaign with Tegan and Sara, and campaigns with the likes of Kim Gordon, Evan Rachel Wood, Sara Bareilles, and Riley Keough, to name just a few, have helped to spawn a cult-like following among queers and feminists. But outside of making feminism and tomboy fashion accessible and on trend, they’ve also raised a ton of money for charitable causes. In 2018 alone, Wildfang has raised $450,000 for non-profits — $300,000 of that went to RAICES after the brand responded to Melania Trump’s highly-politicized Zara coat reading “I Really Don’t Care Do U?” by turning a similar green jacket into “I Really Do Care Don’t U?” all benefitting the organization that paid for legal services for refugees and immigrants.

“The whole team was like just wrecked in the office,” McIlroy tells INTO of the campaign. “We’d been completely depressed all week watching those kids in cages and then she wore that jacket and it was like ‘Fuck this. We got to do something about that.’ It just felt like insult to injury, so the entire team felt a collective outrage.” 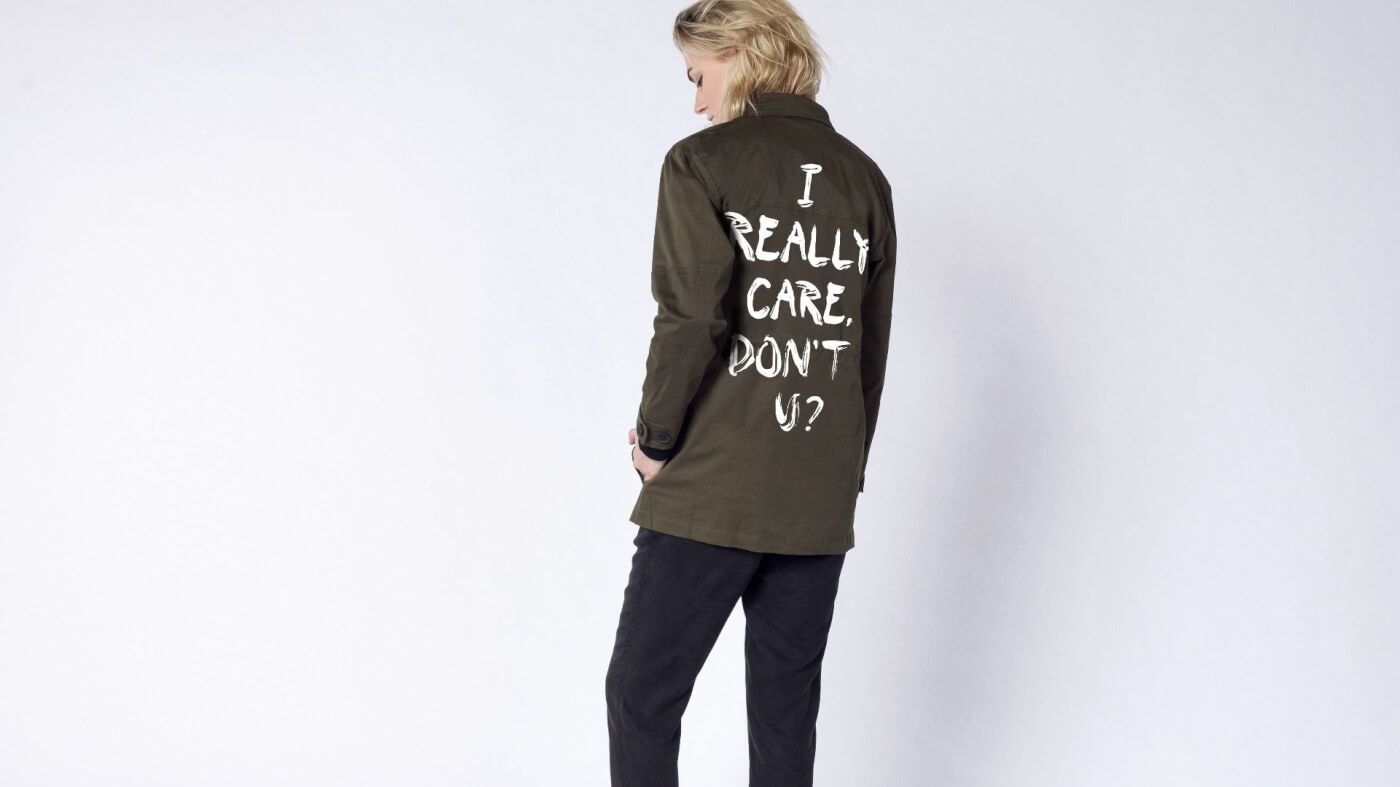 McIlroy credits her team (many of whom have been part of Wildfang from the beginning, including Creative Director Taralyn Thuot) for the kinds of causes the brand aligns itself with, and also for what McIlroy sees as walking the walk.  Over the last few years, feminism has become more fashionable, and big box brands like Forever 21 and Top Shop have attempted to profit off of regurgitated original ideas from the likes of Wildfang and Otherwild, another queer woman-owned shop whose Future is Female shirts became popularized after being spotted on celebrities like St. Vincent and Cara Delevingne.

“I’ve always said that it’s not my space,” McIlroy says. “We didn’t create it; we stand on the shoulders, so I welcome people into that space. I think it would be fucking great if every company in the Fortune 500 identified as a feminist company. So I welcome people into the space. I think the deal is are you walking the walk as well as talking the talk? Are you giving back? Are you representing your community? Are you here representing an entire population of women? Are you giving women a platform? Are you standing up and fighting for gender equality? Are you standing up and fighting for trans women?”

Walking that walk includes expanded sizing and utilizing models of size as well, McIlroy says. Some models are first-timers, trainees who learn on the job but often get booked by agencies and other brands after working for Wildfang.

“[Representation of our community] is built into the core of our model, and therefore we hope that our community trusts us to authentically represent a really wide spectrum of individuals,” McIlroy says. “We show our clothing on three different body types. We are a small business — that means we triple our production costs, right? But at the end of the day, if you’re a size 20, you can’t buy off a size 2 model. That’s just a joke. You can’t be what you can’t see.” 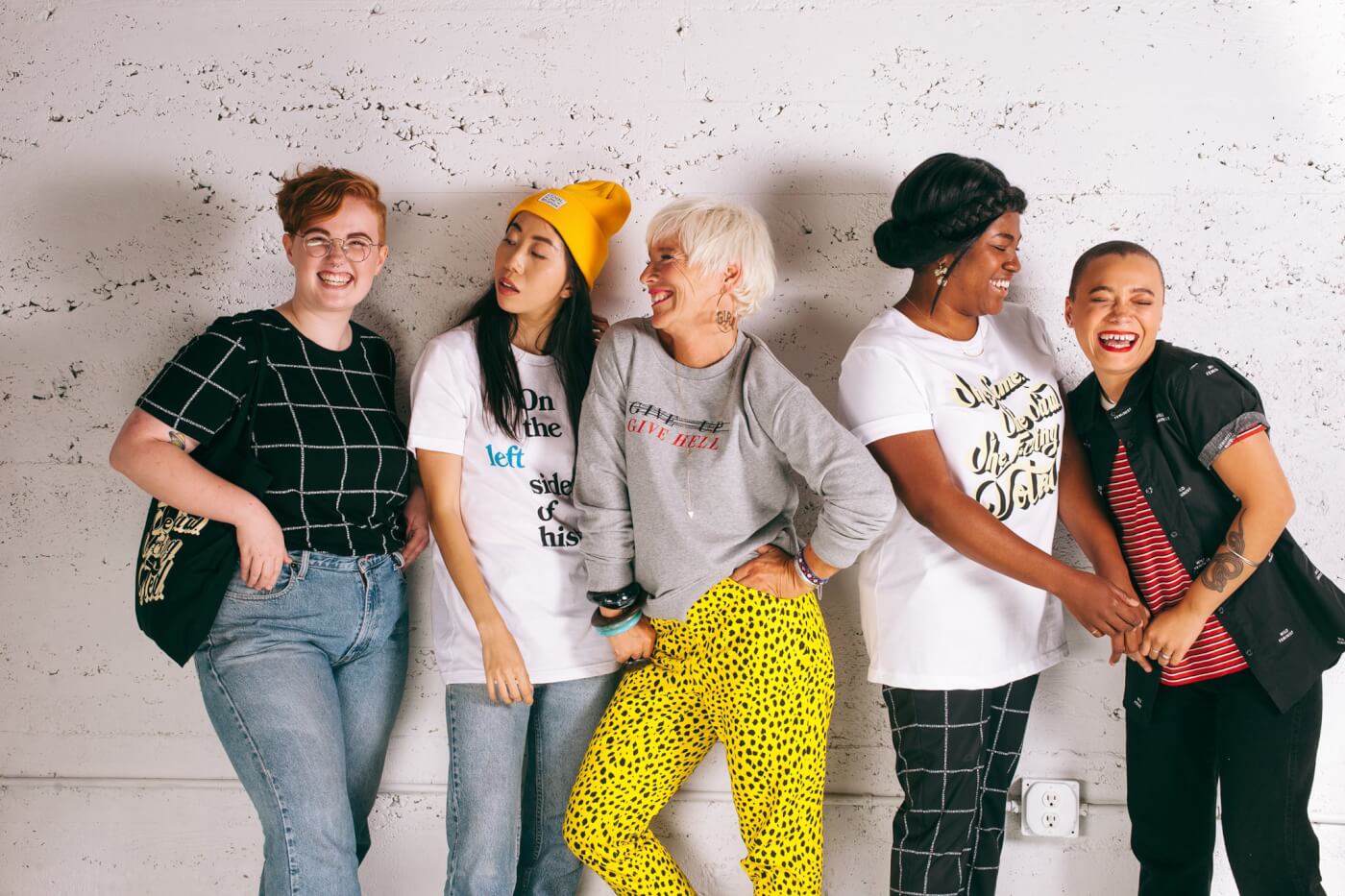 Right now, Wildfang originals and collaborations go up to size 20, but the brand has plans to offer up to 26 in the near future.

“Is that good enough? No. Is there still room to go? Yes,” McIlroy says. “But for the size of our business, it’s not a bad effort and when we have size 18 or 20s, it’s very specifically built. It’s not like some crappy fit, like these pants fit on a ton of people who have those sizes. We’ve redone the pattern, we’ve redone the grading, so when we put that expanded sizing on the market, we want to make sure it’s going to be fucking good and we want to make sure we’re shooting it on people who identify as that size so it’s a much easier buying process.”

Since launching in 2012, Wildfang has seen some competitors in the feminist/androgynous clothing space close up shop. The big box stores and brands move on to the next trend they can bite off, and yet, Wildfang is opening shops in two of the hippest shopping areas on both coasts. McIlroy attributes that kind of success to letting their values guide them — to working collaboratively as a diverse team that decides where the effort is being placed. 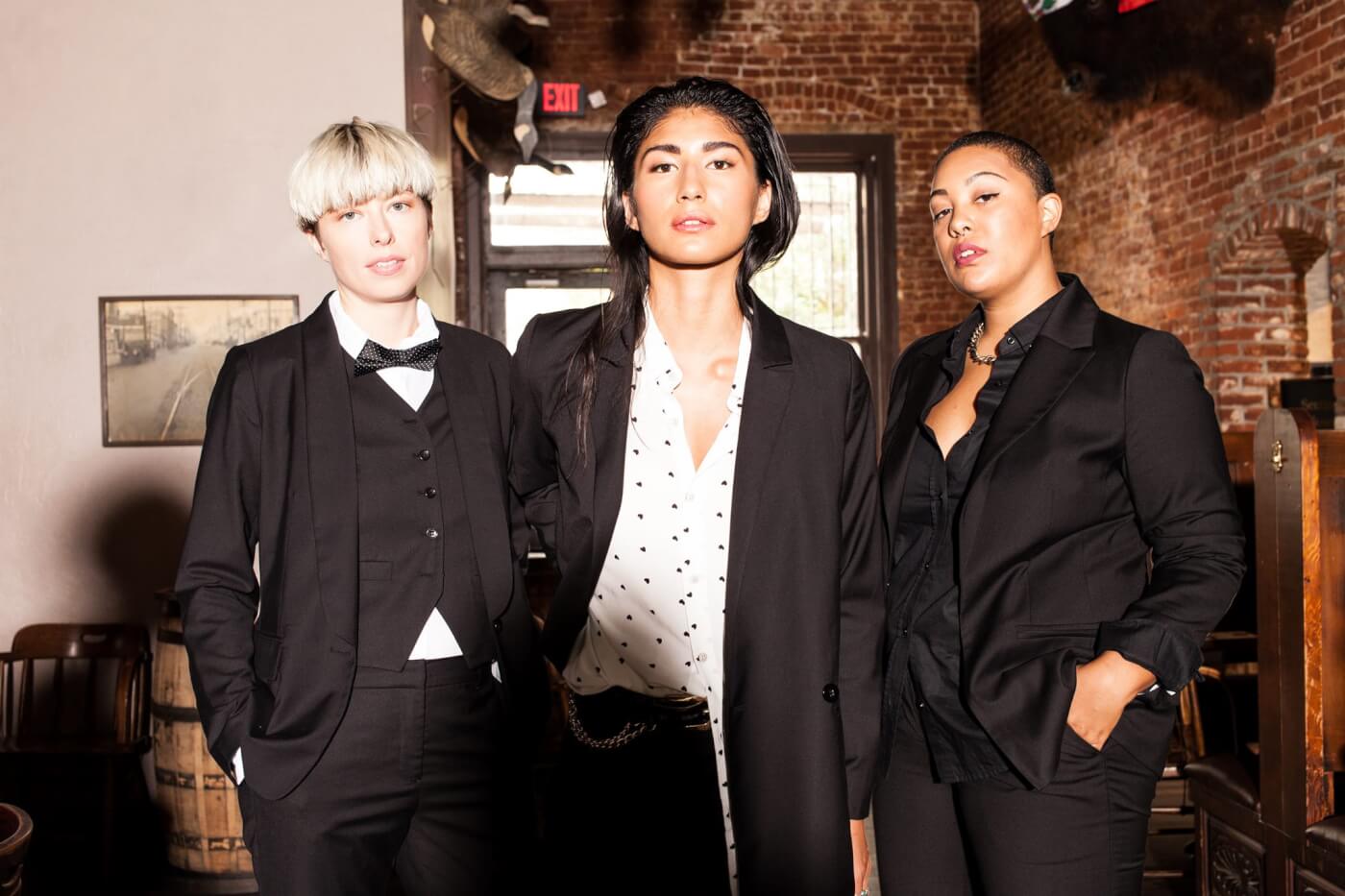 “We wear our hearts on our sleeve,” McIlroy says. “We take every conversation with the same values in place. It’s not like we make decisions for business reasons or commercial reasons — we make decisions for brand reasons. We come back to the same set of values on every major decision, which keeps us putting it in a very clear direction.”

Their current collaboration with Refinery29 is a mid-term election push encouraging women to vote. The Just F*cking Vote Collection features T-shirts that read “She came, she saw, she f*cking voted” and “On the left side of history,” among other items, all benefitting She Should Run, an organization helping to fund women looking to run for political office.

“The intention is to change the state of our beautiful planet,” McIlroy says. “We’re trying to get more women to get into leadership, local and national level in politics, and yeah, we’re trying to use direct communications and platforms to get first time voters right to the polls — because I read some really depressing stats about…I think it’s like 40 percent of young women in America say they might not vote and 30 percent aren’t sure if they’re registered or not. So we felt like whatever we could do to just continue to remind or hit them over the head it’s completely critical that they vote on November 6th. If there’s anything else they fucking do for the rest of the year, it is vote.”

With so much of Wildfang’s efforts going into philanthropic efforts, McIlroy finds it amusing when people assume she and her team are personally profiting from their own community. In fact, most of the time, they are putting money into their efforts and, in effect, losing money.

“It’s super simple math and I only care about the people [who benefit],” McIlroy says. “Because I got to write a $300,000 check for the lawyers who are trying to get the kids out of the cages.”

That doesn’t mean Wildfang has any plans of slowing down. Instead, they’re looking to create more physical connections with their current and future fans, which is why their stores will also host regular feminist events. Last night, their Portland store hosted a panel called “Women Who Lead: A Discussion and Celebration of Leadership” with Adrienne Nelson, the first Black Supreme Court Justice, and Rukaiyah Adams (Chief Investment Officer at Meyer Memorial Trust), Joy Davis (CEO and Founding Partner of Design and Culture Lab), and politician Margaret Carter.  (One hundred percent of donations collected at the door and bar tips, as well as 10 percent of sales were given to Justice Nelson’s campaign.) Tonight, the L.A. location will host its launch party and, every weekend this month, offers free feminist tattoos and tarot card readings.

At a time where women-centric spaces are shuttering and under attack by men’s rights activists, Wildfang has become that virtual and physical manifestation of a space for wild feminists and their supporters. (Wildfang collaborates with and sources from menswear brands like Publish, Volcom, RVCA, and Obey who share their brand values and missions.)