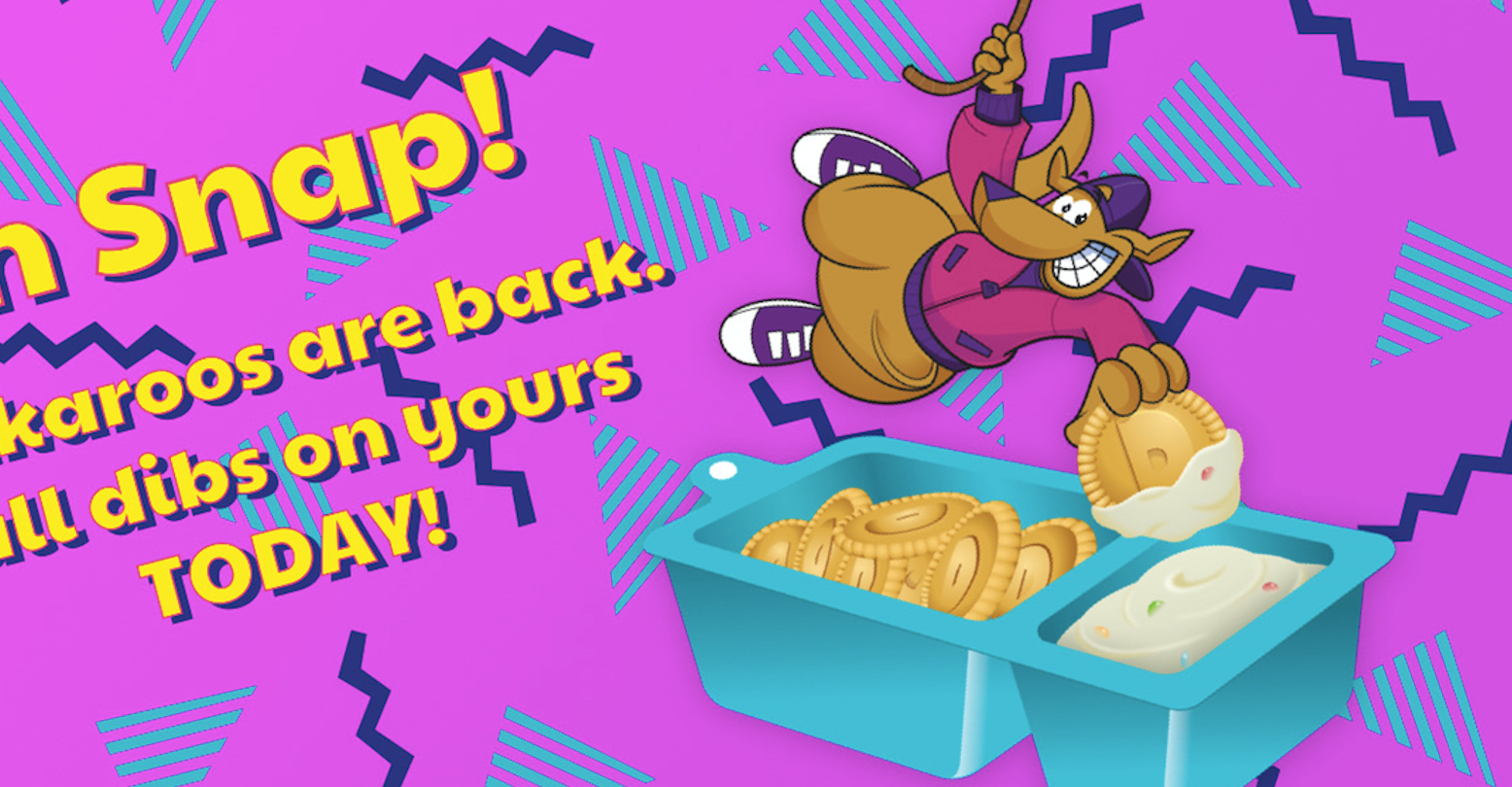 Last May, ‘90s kids rejoiced when the long-defunct Dunkaroos snack made a surprise comeback amidst a pandemic lockdown and an ocean of political anxiety.  To celebrate the one-year anniversary of their return, I thought it would be fun to look at the sinful, secret gay history of the snack that claimed their “creamy taste will drive you wild!”  Dunkaroos may just be the gayest, queerest goodies of the ‘90s, all because of their iconic mascot Sydney.

Sydney first hopped onto our TV screens in 1993 sporting a matching green safari hat and jacket singing about Betty Crocker’s new treat.  “My name is Sydney, I’m an Aussie hunk,” the kangaroo sang with his head peeking over a plywood cutout of a tanned, oiled body-builder in a tiny speedo.  Holy Snagglepuss!  Sydney was queer-coded from the very moment he was introduced. Although this is no surprise if you know the human actor behind the furry macropod…

Sydney’s voice is none other than Hedwig herself, John Cameron Mitchell! That’s right, Sydney, the sugar-dependent kangaroo, and Hedwig, the angry-inch, are one in the same.

Sydney was queer-coded from the very moment he was introduced.

Before Mitchell was a Golden Globe-nominated, Tony Award-winning superstar, he was a struggling actor desperate for any job he could find.  Luckily for us, Mitchell crawled his way out of that alley-way refrigerator box and into a seedy, grimy, glory-hole-ridden recording studio to provide the voice for the greatest cartoon mascot of all time.  In a 2014 interview with NPR, Mitchell mentions voicing Sydney and reveals “I made a living, you know, on commercials and voices.”  The El Paso-born performer had to affect an Australian accent for the role, just like the ones Olivia Newton-John faked for movies like ‘Grease’ and ‘Xanadu.’

The most iconic commercial for the brand came out in 1994.  “How do you do YOUR Dunkaroos?” Sydney asks as his limp-wrists retrieve two boxes of the snack from his giant pouch. “You can dunk a Dunkaroo with as much chocolate or vanilla frosting as you want!” This ad campaign tapped into the reckless, yearning-for-independence vibe that defined a ‘90’s childhood.  Dunkaroos let YOU have control over how much frosting you used: Take that mom and dad!  The TV spot featured various children demonstrating their favorite way to eat the snack.  One young lad dipped his Dunkaroos “long distance DAINTY style,” a daring subversion of stereotypical boy behavior.  Sydney represented self-expression and acceptance in many of the same ways Hedwig would. Dunkaroos let you know it was ok to be your unique, authentic self.

By 1996, Betty Crocker was looking to change the direction of the Dunkaroos brand;  Sydney was replaced by a gruffer, sportier American kangaroo named Duncan.  Duncan aggressively bungee-jumped into the frosting with a basketball-shaped cookie, wore trendy athleisure clothing, and pounded pu$$y.  That same year, the “Party Girl” television sitcom that John Cameron Mitchell starred in debuted to a dismal critical response and non-existent ratings. Fox pulled the plug on the show after airing only four episodes and Sydney’s final commercial for Dunkaroos aired in early 1997.  Mitchell’s career was at an all-time low, but the artist tapped into the indomitable spirit of Sydney and birthed his second-greatest character, Hedwig!  What began as an off-Broadway play soon turned into a Sundance-winning, Golden Globe-nominated feature film. Mitchell followed up this success by directing the critically acclaimed films Shortbus (2006) and Rabbit Hole (2010).  The latter film earned Nicole Kidman an Academy-Award nomination for Best Actress.  It’s a John Cameron Mitchell world and we are just living in it, baby!  The years weren’t as kind to Dunkaroos, which were soon to be yanked from U.S. shelves.  It would be nearly a decade before Betty Crocker dusted off the long-dormant cookie/frosting combo.

The re-launch of the Dunkaroos brand in 2020 has included the return of the vanilla-flavored cookies as well as the introduction of a Dunkaroos cereal.  These products are readily available at Wal-Mart, but they are missing a key ingredient of the 1990s treat; Sydney himself.  Our cuddly, frosting-obsessed, homosexual marsupial is nowhere to be found on the brightly-colored packages of the snacks.  Sydney seems to have disappeared into the phantom zone along with problematic het-icons like Aunt Jemimah and Uncle Ben. The only other obviously queer snack-food mascots to represent us rainbow-folk are the seasonal Frankenberry (who only gets let out of his closet during the Halloween season) and notorious rug-muncher Little Debbie.  As for the rumors about Snap, Crackle and Pop being in an open-throuple, I can’t prove it but they are the face of a new snack called Poppers!

Dunkaroos let YOU have control over how much frosting you used: Take that mom and dad!

If Sydney does make an unlikely return, the chances of Mitchell reprising the role is unlikely.  In addition to playing Gabe on Hulu’s critically-acclaimed “Shrill,” the actor was recently announced to play Joe Exotic in an upcoming NBCUniversal Television series alongside fellow queer star Kate McKinnon.  I cannot wait to watch the show with some of my favorite movie snacks, including the discus cookies with copious amounts of opaque, white globs…of frosting. Dunkaroos forever!  ♦