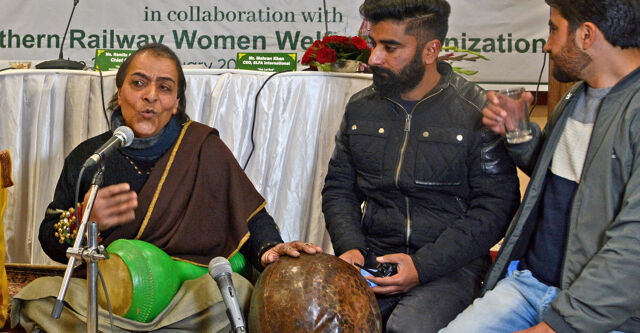 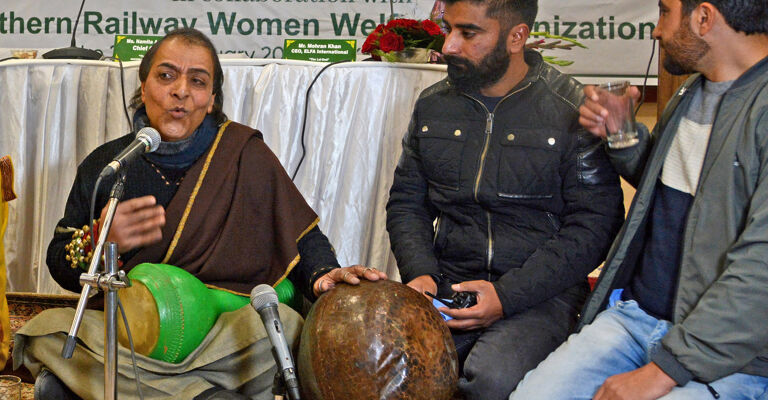 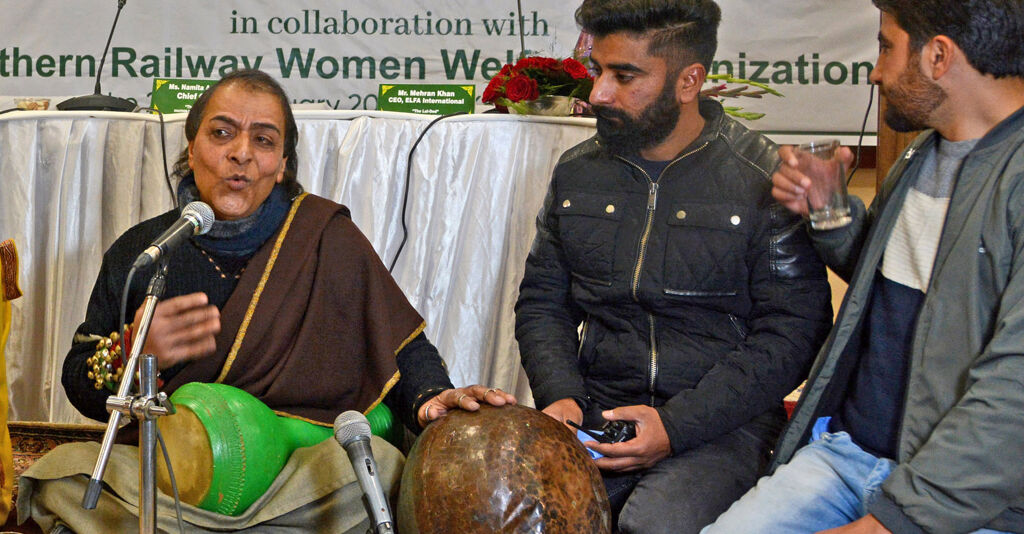 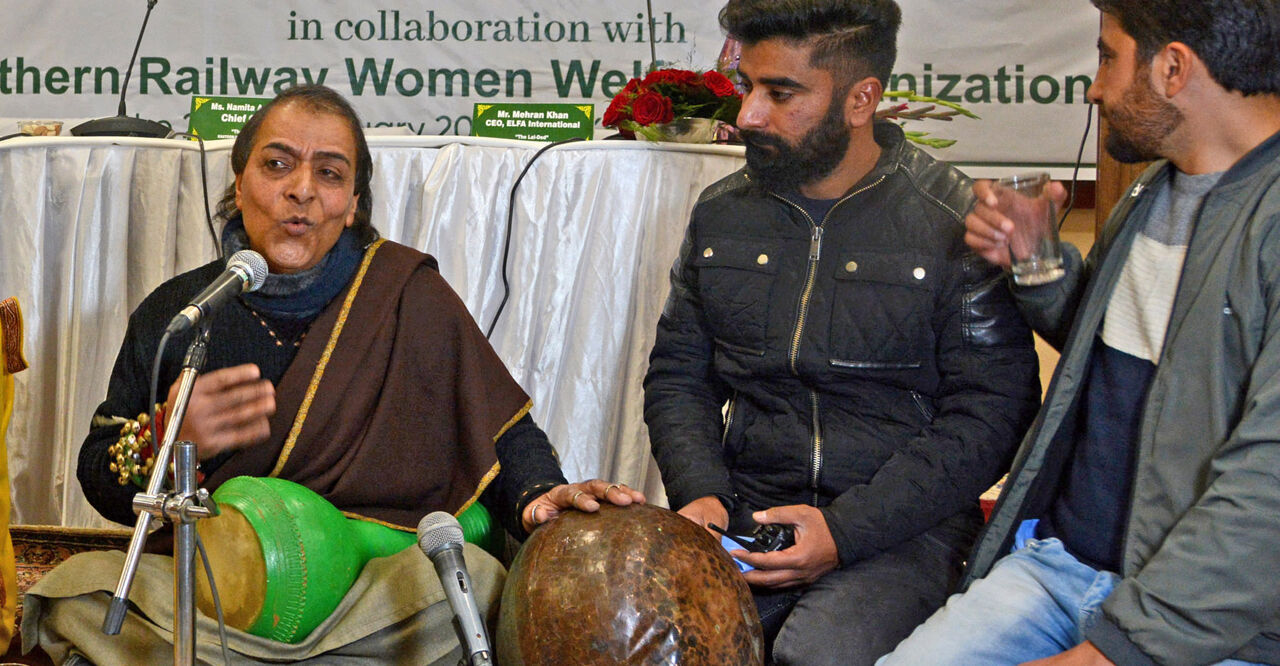 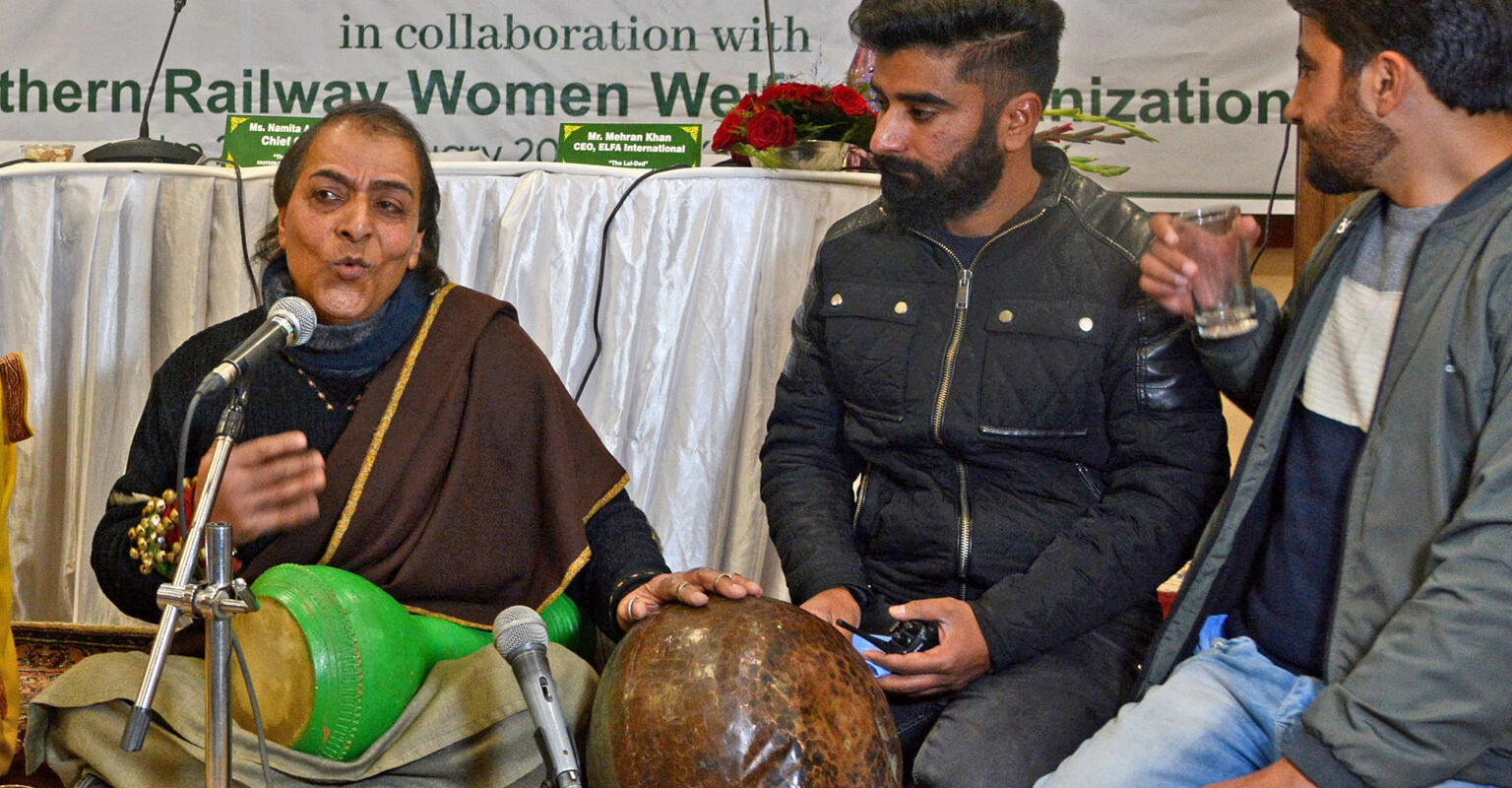 Babloo, at 49, has made a living as a matchmaker for the past 25 years. For the past two years, she’s been locked inside her home, unable to move out to earn a living. Babloo identifies as a transwoman and lives in Srinagar’s Dalgate area. She dropped out of high school after being regularly harassed and bullied by classmates and friends. She grew up while watching and admiring her Guru, Haji Ghulam Mohammad.  Mohammed trained Babloo in different forms of folk singing and dancing. Later, she joined him and started to perform in local marriage ceremonies.

For centuries, trans folks in Kashmir have been deserted by their families and shamed by society. They’ve taken up the role of matchmakers and folk singers, outlets that provide them work and acceptance in society to some level. Most of them earn their livelihood by matchmaking or singing and dancing at weddings which usually take place between the months of April and October, given the region’s harsh winters. That means their work is limited to those months.

“Initially I adored women’s dresses and was fascinated with jewelry, like earrings and bangles. I used to wear my mother’s clothes and would stay inside my room for hours feeling happy and content at heart. I was not sure about this sentiment, as I was not aware of my own body at that time. Things were always behind doors for a long time before I finally stopped being ashamed of my body and choices”. Said Babloo, who has taken up matchmaking as a profession.

Life started to run a smoother course for Babloo as she found how to earn a living.  She would spend most of the time among the transgender community members. But everything turned upside down on August 5, 2019, when the Indian government unilaterally revoked the special status of Kashmir­ by abrogating Article 370 and 35-A of the Indian constitution; divided the state into two Union Territories directly to be ruled by New Delhi.

The Kashmir Valley’s 7 million inhabitants were sent into a military lockdown with a full communications blackout, with internet and phone services cut for more than six months. When Kashmir was limping back to normalcy in March of 2020, India announced a nationwide lockdown to curb the spread of the COVID-19 pandemic. In March of this year, the situation in Kashmir had improved, with low numbers of positive cases and no deaths on record. Still, authorities permitted tourists in bulk without keeping a proper tab on SoPs.

If we stay home we die of hunger and depression, if we go out, we die of the virus.

These back-to-back lockdowns, decades of conflict, and political instability in the region have further marginalized the community. With no welfare scheme or aid forthcoming from the government, the transgender community is living in extreme conditions: some face violence, others are not able to make ends meet.

Babloo and other members of the community had started looking out for other members who were facing hardships and were more vulnerable to violence from families, but with the uncertainty created by the pandemic, that, too, came to a grinding halt completely.

“I have witnessed many political troubles in Kashmir all my life, but I have no account of such a distressing situation or time”, said Babloo. “There is no end to our miseries; our community is facing hardships that cannot be explained. I had to attend a wedding and perform within my own locality, but I couldn’t go, they performed the ceremony simply in presence of only family members. If we stay home we die of hunger and depression, if we go out, we die of the virus. There are two dead ends, and we are stuck in-between”.

Trans folks have seen more inclusion stateside in the past few years, but India’s transgender community still struggles to win recognition in a country weighed down with sociocultural frailties. In Kashmir, their troubles are even worse due to political strife.

With no aid forthcoming from the government, the transgender community is living in extreme conditions: some face violence, others are not able to make ends meet.

50-year-old Reshma, a resident of Srinagar, has always been passionate about singing but never pursued her dream due to societal and family hassles. Her family pressurized her to learn tailoring “I mastered the skill but was struggling inside as I wanted to live a free life, openly and become who I was. I wanted to dress, walk, talk like women”. Says Reshma whose real name is Abdul Rashid

Finally Reshma made her singing debut in the wedding of her younger brother. Reshma’s brother died after few years and she had to take the responsibility to raise his four children, she adopted them and in order to give them a better life she looked for extra avenues of work. “When my brother died I had an additional responsibility to take care of his family. Working as a tailor was not enough so I took to singing and started to perform in weddings. It struck to me easily and people liked it as well”. Said Reshma, who lately has become a leader for the transgender community in Kashmir.

Reshma’s videos went viral on social media platforms and she suddenly became an overnight singing sensation. After getting the recognition Reshma persistently started to work to unite the transgender community in the valley and encouraged them to work and live a life of dignity.

But for the past two years, Reshma is back to sewing clothes to bring in some cash to the family. However, she is eager to go back to performing at weddings. “I cannot stay away from the art for long; I become stressed, and I feel liberated or out of jail when I perform.” She said

In February 2014, the Supreme Court of India passed a landmark judgment acknowledging trans folks as a “third gender” designation. The apex court deemed that individuals had the right to the self-identification of their sexual orientation. It also ruled that the fundamental rights granted by the Constitution are equally applicable to folks who identify as trans or hijra.

The judgment also called for affirmative action in education, primary health care, and that trans folks be identified as beneficiaries of social welfare schemes.

Aijaz Ahmed Bund, the only out-LGBTQ+ activist in Kashmir, who runs an NGO, Sonzal Welfare Trust, to support the gender and sexual minorities in Kashmir said in an interview: “The Rights of the Transgender Persons Bill was passed in India’s parliament, but its provisions have scarcely been implemented in Kashmir Valley. Now after the abrogation of Article 370, I do not see any scope that government will focus on the transgender community.”

Bund also published his first book about the transgender community, Hijras in Kashmir: A Marginalized Form of Personhood, in 2017

Aijaz also filed a PIL (Public interest litigation) to the High Court that same year. The PIL seeks to create programs ensuring social, economic, and political inclusion and rehabilitation for the community. It also seeks a provision of social security including a monthly welfare fund for transgender people. The PIL had many interim judgments as well but nothing was executed on the ground till now.

“The transgender community in Kashmir is under back-to-back lockdowns, and Covid-19 has made them more vulnerable as there are no medical policies or interventions for them,” Bund told INTO. “If they turn out to be COVID-positive, they do not get proper medical care. They face tremendous mental health issues as they already have a dispute going on inside about their body image and orientation and on top of that they are overburdened to think about their survival and safety.”♦