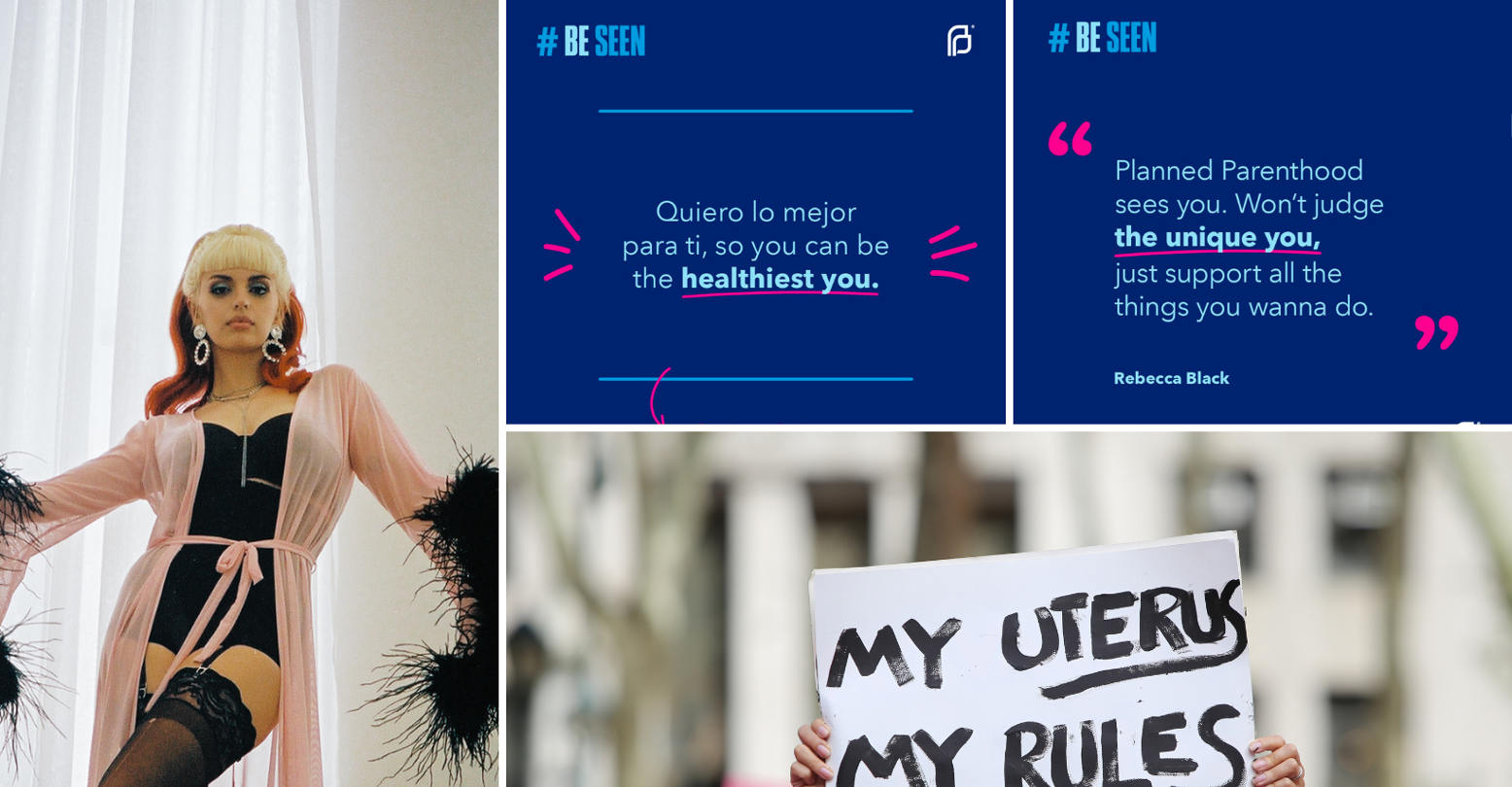 A video opens on a young girl with pink braids getting ready for school. “Look,” a woman says in voiceover, “you are here for a reason. What that is is for you to decide.”

Planned Parenthood has always been an advocate of choice. In their latest campaign, they’re focusing on a new generation of queer youth struggling to find their place in the world. And they tapped musician Rebecca Black to spread the word.

“I’ve been a longtime advocate and supporter of Planned Parenthood,” Black explains. “It’s one of the first organizations I became aware of as a young woman.”

Now, she’s an ambassador for the brand’s “Be Seen” campaign, which highlights the issues that Gen Z is most passionate about, including access to healthcare, social and racial justice, queer visibility, and immigrant rights. Black joins New Orleans queer icon Big Freedia, legendary singer Paulina Rubio, and Emmy-award-winning actress Lynn Whitfield to spread the word.

“These last few years, I’ve been at a turning point in my life where I’ve been able to I’ve been able to take a lot of power into my own hands [and] be very specific with the choices that I make,” Black says. “And that affects everything, from the new music that I’m putting out and making it as unapologetically queer as I can, to really advocating for and getting behind the organizations that I think are important.”

Planned Parenthood has been under attack for decades. Today, even during the Biden administration, we’re seeing an even more aggressive push on the part of Converservatives to overturn Roe v. Wade and dial back the progress of the reproductive rights movement as much as they can.

The Be Seen campaign, however, is different. Targeted at queer Gen Zers of color, the campaign encourages viewers to show each other love, support, and care. On the site, users can even leave encouraging voice messages for people in their lives they feel could use a bit of affirmation.

“When Planned Parenthood came to me with the Be Seen campaign, there was no question about whether I would do it or not,” Black says. “It’s something that directly speaks to the people who really did hear it. It was just so exciting for me to be a part of.”

As a queer, Latinx musician who’s been in the industry for a decade, Black has been an unusually public emblem of Gen Z’s quest for selfhood. She sees her work with Planned Parenthood as an extension of this.

“We’re always on this like, never ending quest to figure out who we are and why we’re here and what we’re going to do with the limited amount of time that we have on this planet,” Black says. “My case was pretty unique, in terms of what I went through with “Friday” and everything like that, but my queerness was something that was inevitable, whether or not that had happened to me. It was a journey that I was going to have to figure out on my own at some point, and it was being around a supportive community that really helped me discover myself.”

“I am really inspired by the queer and trans people of color who have not only been the brunt of these [recent political attacks] on their freedoms,” Black says, “The entire course of their lives, they keep showing up for things when they really don’t owe anybody anything. They’re still able to get up and fight every day for the right to just exist. There are so many kids young people and people in general who, every day, feel unseen and unheard.”

For Melanie Newman, Senior Vice President of Communications and Culture at Planned Parenthood, the campaign “signals a new moment for Planned Parenthood, where we are able to reiterate our mission and reclaim the narrative that has for too long been defined by opponents of sexual and reproductive health.”

The campaign, for Newman, is an extension of the life-saving work Planned Parenthood does. The focus is simply broadening.

“We’ve increasingly been speaking out on issues that affect Planned Parenthood patients and communities, like racial justice, immigration rights because we believe we’re not just to protect and help our patients access care, but to see each individual holistically, for who they are as people, and support their ability to live freely.”

Newman says Planned Parenthood is “really excited about this moment that we find ourselves in,” and grateful for the opportunity to “reach out to young people, black and Latinx communities, the LGBTQ community, and really meet people where they are.”

It doesn’t hurt that the ads themselves are works of art.

“As a black woman myself, every time I see the ads, it melts my heart to see people of color in such beautiful scenes and scenery and lighting. The love really jumps off the screen.”

Visit beseen.org to learn more about the campaign. You can also call 1-888-BE-SEEN1 to remind someone you see them