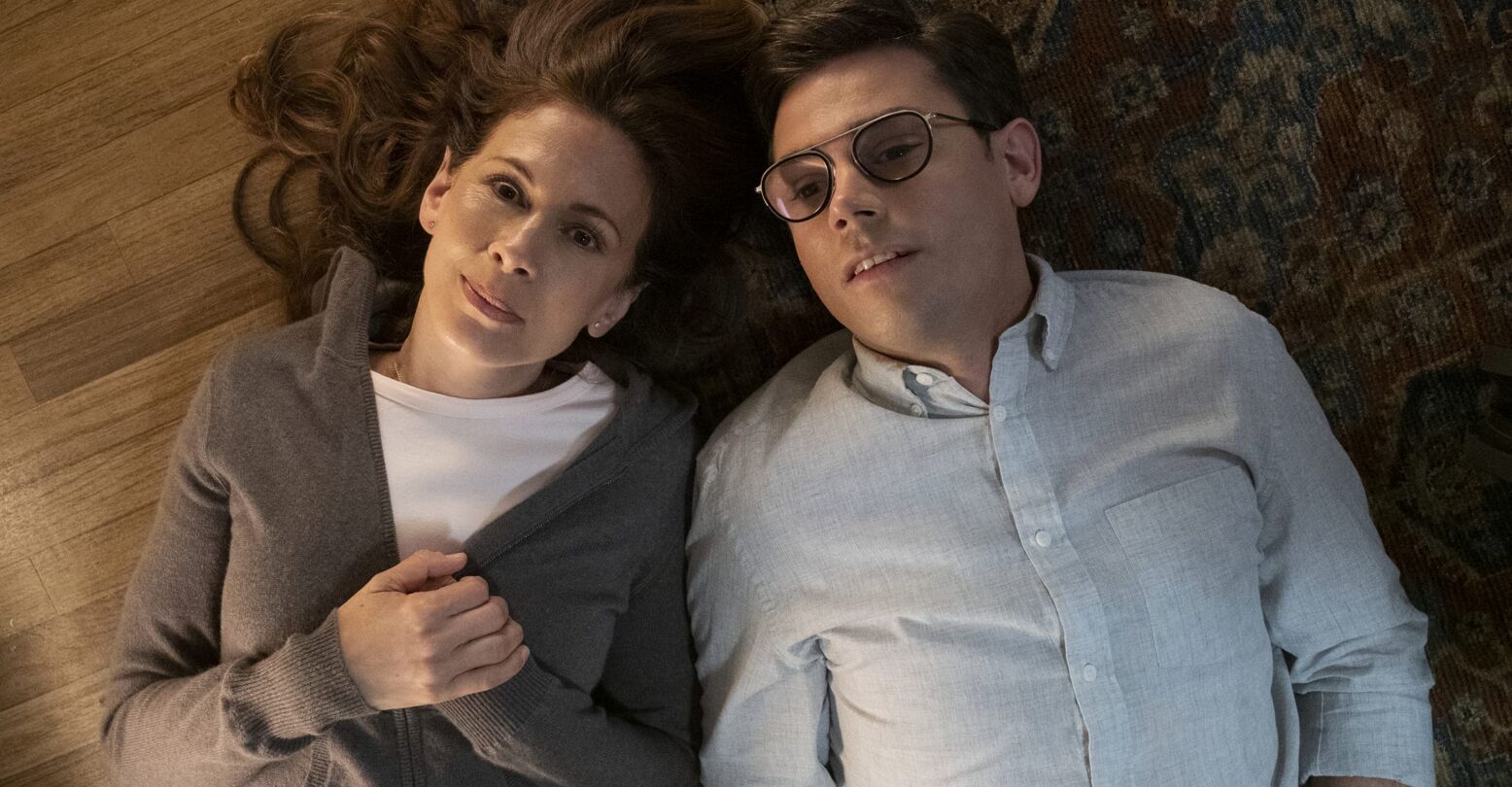 If you haven’t caught the first season of Ryan O’Connell’s “Special”, you literally have no excuses. It’s one of the best shows on TV, and one of the few shows to take an honest, no-bullshit look at what it’s like to be disabled in an ableist world. It’s also amazingly, wonderfully queer.

The second season, which premieres today on Netflix, goes even deeper into the territory touched upon by the first series. This season, thanks to thirty-minute episodes, the return of a truly brilliant cast, and Ryan’s entrance into the queer, disabled community he’s always dreamed of having. He goes to Crip Prom, he meets Tanner, an insecure backup dancer, and he has some regrettable (but consensual) sex with a chaser.

Most importantly, he stops taking other people’s shit. All his life, Ryan has been apologizing for his disability. Now, he’s finally coming into his own. The show celebrates Ryan’s messiness, his struggle with self-love, and his ability to break out of the ableist prisons the world has tried to put him in.

We caught up with O’Connell to talk about “Special” Season 2 and Ryan’s radical awakening.

RYAN O’CONNELL: What’s that photo behind you?

I love that! I love a Michael Stipe-head. Good for you!

He was so sensitive and he would hide behind his hair before he shaved it off. I get it.

The “Losing My Religion” video? It’s insane. Like what’s going on?

It doesn’t matter, I’m in hook, line and sinker honey.

So the second season of “Special” is great. I watched all of it in one day.

That’s music to my queers, I’m so glad.

I feel like Ryan in this season is fighting self-hatred and coming to terms with himself by engaging with chasers. I wanted to know how that sort of came about. It was a really interesting choice.

Well, I wanted to start from a place of Ryan (the character) thinking that he’s done growing because he came out about his CP. He’s operating from a place of unearned confidence like, “Well I did that! I have CP, you can Google it, I’m going to go into the night, xoxo.” And clearly, he realizes pretty quickly that it’s not that easy. I wanted to show someone who struggles with self-worth and self-esteem. In episode two, when he meets the devotee and goes on a date with him—it was really important to show that that sexual encounter was consensual. To me, he’s staying in that sexual encounter because he doesn’t have the self-esteem to get out of it. And also, part of him feels lucky to be there, and he hates himself for feeling that way. But he’s so in awe that this Hallmark movie actor could want to fuck him that he doesn’t care how he’s being fucked. The fact that he’s being fucked at all is considered a win. Obviously, throughout the season he gains more agency, and that’s what I wanted to show. Him coming into his own and vocalizing his own feelings.

“My whole life I’ve been worrying about if other people are comfortable with my existence, but I’ve never asked myself, ‘Am I comfortable? How the fuck do I feel?’

He sums it up in the finale, which is something I’ve always felt and has always been my journey: “my whole life I’ve been worrying about if other people are comfortable with my existence, but I’ve never asked myself, ‘Am I comfortable? How the fuck do I feel?’ That was straight-up ripped from my diary. It took me a long time, and I don’t think I was really aware of the mental calculations of just daily life. Just how I was so hyper-aware of how I was being perceived, and how my go-to reflex was always like “how do I make this person be ok with me. How gay do I  need to be, how disabled do I need to be,” like, check the levels, are we going up, are we going down? But you don’t really realize what a psychic toll that takes on you. I wanted to show that. Him having this radical awakening and being like, “no. I want to be the boy with the most cake.”

Let’s talk about the shitting on the dick scene!

It blows my mind when you know something is so common. Like, every gay man has encountered a little bit of shit. It’s just part of the gay ritual. But it’s crazy that it’s been left off the table in terms of queer storytelling. Whenever something hasn’t been talked about, I go through a phase of a) being pissed, b) being like “we need to remove stigma!” and then c) as a storyteller, getting really excited. It’s always exciting-slash-infuriating to be one of the first people to talk about something.

We’re allowed to exist, but only in a very specific way.

And the answer is, of course you can! Go crazy! It was also important to me that we show Ryan being a little selfish in that moment. Tanner was really understanding of his topping anxiety in Episode 3, and then Ryan doesn’t extend him that same kind of space and courtesy. It’s important to me that Ryan is a flawed character. I think that marginalized people can exist, but they often are placed into these narrow slots where they have to be virtuous. And it’s really important that we don’t deny them the complete, complicated spectrum of their humanity.

The moments when I’m the most like “Go Ryan!” is when he’s deliberately standing up for himself, which I guess translates as selfishness to some people.

It speaks to them more than it speaks to the character, and a lot of people are like “this Ryan guy is so terrible, he’s a jerk to his mom,” and I’m like…okay we have Walter White out here killing people, we have Tony Soprano murdering someone in a meat grinder and we’re still like “yes daddy!” And it’s like…Ryan isn’t allowed to be an occasional asshole? Again like, we’re allowed to exist, but only in a very specific way.

And it’s part of the “inspiration” shit, too. It’s like, no I’m not here to inspire you, I get to be an asshole just like everybody else.

Right. Like a disabled person can only exist to facilitate someone else’s journey and happiness. It’s not about them and their own needs and wants.

I found myself, for the first few episodes, wondering if Ryan was going to meet more disabled people. And then very soon after I was like, yes!

It’s so loaded, because I think the first half of my life I was actively not wanting to be around disabled people because it made me profoundly uncomfortable and I had such internalized ableism that anything that reminded me of my disability I wanted to run away from, and then as I got older and more comfortable in my disabled skin, I was like, “wait, where’s the disabled community?” It’s actually wild to me that it’s taken me so long to meet people who are like me. Shooting the Crip Prom episode was incredibly powerful, because for the first time, I looked around the room and I was the majority and not the minority. And I’m talking about me, the person, not just Ryan the character, was in a space full of disabled people. I’d never experienced that before. And it’s infuriating! It’s crazy! I can’t imagine what it would be like to walk into a room and be the majority de facto. It’s like what??

There are several moments throughout the show where characters walk into the room and notice that everybody is this one thing that they’re not. It does feel like it’s deliberately hard to find community if you’re not in any kind of majority.

I think with the disabled community in particular, it just speaks to a larger issue of the world not being accessible. So it’s not like when you’re out, you’re going to encounter so many disabled people. For reasons X, Y and Z, you’re in a space that isn’t wheelchair accessible. Not only does society ignore us and make it hard for us to gather, it sends the message to us that the world is not built with us in mind, so we don’t matter. That was the highlight of filming the show, was Crip Prom. I sold a show to HBOMax called “Accessible” which I hope goes to series, but it’s a predominantly disabled cast, and that was sparked by the experience of shooting Crip Prom. I was like, “I want to be on a set full of disabled people.” That would be so fucking fun and just soul-nourishing.

And just to be able to relax and be like, everybody here is on the same page. Which is rare!

Able-bodied people should pay for the health insurance of disabled people because we do so much emotional labor for them.

I was like well actually I don’t think anybody should be paying for it! But anyways.

I had [a] moment in 2017 where I just became acutely aware of the mediocrity and unearned confidence of straight white men.

I found it very moving that even during that moment of community and happiness at Crip Prom, he still has to babysit someone who’s outside of that.

Tanner and Ryan, it’s a very complicated dynamic. My rule for writing is always that both people need to be right. I understand where Tanner’s coming from in terms of him really trying and making an effort, and he’s a product of an ableist society so he’s going to make some fumbles. And I also understand where Ryan’s not giving him that wiggle room to make mistakes, because Ryan realizes in that moment that he’s been doing that his entire life and he doesn’t want to do it anymore. So he’s kind of being radicalized and over-correcting in his anger. I feel like I had that moment in 2017 where I just became acutely aware of the mediocrity and unearned confidence of straight white men. And I was so pissed. I would see them engage in non-consensual conversation with like, the barista about their band, and I’d be like, “how do you have the confidence to just like interrogate this person?” I’m so hyper-aware of how I’m being perceived and how people are feeling, I’m so tapped into that as a means of survival and these guys are just like…”do de do.”

I had that moment where I almost went into straight white male phobia, where I deeply resented them and their privilege. I think Ryan’s in that space and he’s really angry and frustrated, and Tanner is a casualty of that. Even though Ryan is right to feel the way he feels, if it was a different time, maybe he would have given Tanner the space to figure it out.

Which is fair! Both are fair. When I think about the fight in Episode 7, I want both of them to make points that are valid, including my favorite one, which is when Tanner says he was a backup dancer for Ciara so he knows what it’s like, and Ryan laughs, and Tanner says it’s statistically way more impressive to become a backup dancer than it is to be a blogger, which, where’s the lie?

Watch It!
What To Watch: “Brand New Cherry Flavor” and Serial Killers
BY Henry Giardina

The Doctor Will See You Now
Russell T. Davies Is Coming Back to “Doctor Who”
BY Jude Cramer