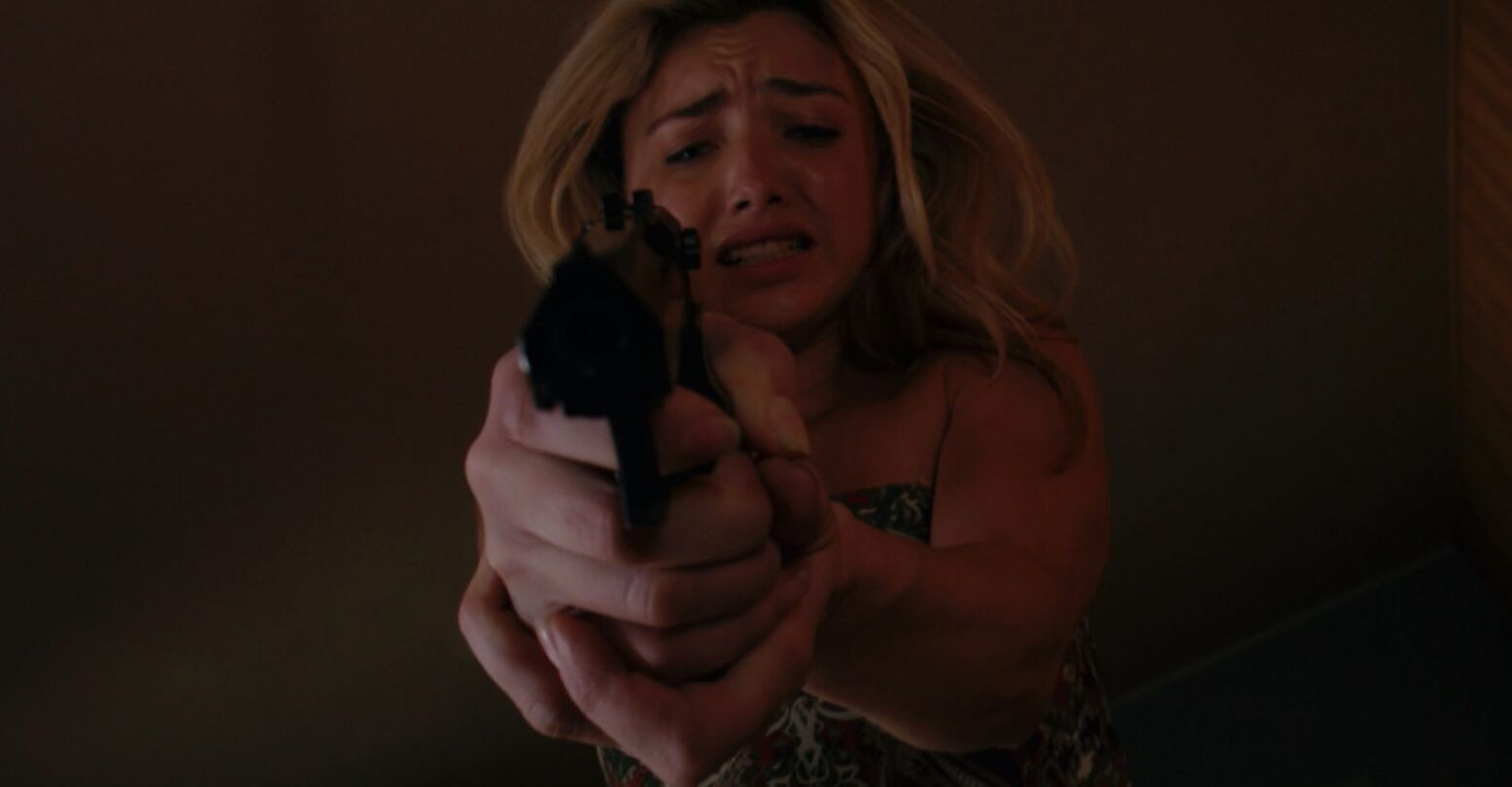 In October 2002, the American serial killer Aileen Wuornos, serving time for murdering seven men while hustling in Florida, was executed. Her final words? “I’ll be back, I’ll be back.”

This autumn, with the help of a clairvoyant filmmaker, Wuornos makes good on that promise. Premiering October 8 on video-on-demand services, Daniel Farrands’ indie picture Aileen Wuornos: American Boogeywoman introduces cineastes to Wuornos, reincarnated. Through a clever blend of biopic and midnight movie techniques, Farrands reimagines the killer’s young adulthood in the seventies and the circumstances that sealed her fate well before she fired her first misandrist bullet. In large part, Boogeywoman explores a young Wuornos’ brief marriage to Lewis Fell, an affluent 69-year-old, in 1976.

Wuornos has long been cinematic fodder, her life and legacy serving as the basis for Patty Jenkins’ Monster (2003) and two documentaries by Nick Broomfield: The Selling of a Serial Killer (1993) and Life and Death of a Serial Killer (2003.) Yet these titles—all tragic and a little too sensationalist—can induce queasiness in those desiring to know Wuornos as a woman, a lesbian, and a human being. Paradoxically, the underground thriller seems to be the genre treatment her story has always needed, yet denied until now: its creative liberties and trademark irreverence allow Wuornos to transcend the constraining “villain or victim” dichotomy ascribed to her by the press and in polite conversation since her arrest in 1991. Boogeywoman hands Wuornos a steel file to escape from the cell of the public imagination and thrive in a pantheon somewhere between Nathan Leopold and Richard Loeb in Alfred Hitchcock’s Rope (1948) and Andrew Cunanan in Ryan Murphy’s The Assassination of Gianni Versace (2018).

Previous Wuornos films—all tragic and a little too sensationalist—can induce queasiness in those desiring to know Wuornos as a woman, a lesbian, and a human being.

“In looking back at the real Aileen, I would imagine that beneath all of her bravado, rage, and deflection, she was really just drifting around in search of a life that she fantasized about since she was a little girl,” Farrands muses over email. “Yet knowing how things ultimately turned out for her, I think it adds another layer of sadness and empathy when you see how even as a young woman she was struggling to find a place to fit in, to feel safe, and to be accepted and loved.”

Assisting Farrands in depicting Wuornos as a broad caught up in universal struggles are the two performers tasked with playing her. Ashley Atwood stars as Wuornos during her final days on death row. As she tells her life story to a visitor, the former child actor Peyton List—now 23—carts us back in time to the inmate’s fun-loving and feral twenties on the Florida coast. Unknowns to many, but surely not for long, the two actresses bring vulnerability, youth, and mischief to Wuornos. As a result, the mythical serial killer moves beyond the hand dryer coiffure and wild eyes of Charlize Theron’s haunting performance in Monster, with plenty of ferocity and visual levity; as Wuornos’ marriage gradually unravels, she lounges poolside at her husband’s mansion in an American flag bikini, eating chicken wings and casting the bones into the crystal water, entirely disaffected. Wuornos’ inability to blend into high society is what its denizens find charming, at least until she reminds them, in so few words, that Eliza Doolittles only exist in the annals of fiction.

“I think it adds another layer of sadness and empathy when you see how even as a young woman she was struggling to find a place to fit in, to feel safe, and to be accepted and loved.”

Farrands remains blown away by List’s ability to look beyond the proverbial monster. “She knew this was a dangerous role for her to delve into, and that she was inviting a lot of comparisons and criticisms,” he tells me. “But she’s a tough cookie — and a really smart actor. I think her performance is not at all what people will be expecting.  Because she is playing a much younger version of Aileen — an almost romanticized version of her younger self as older Aileen looks back on this short chapter of her life — it gave Peyton some latitude in her performance; it enabled her not to feel forced to follow in the footsteps of anyone else’s portrayal, and to kind of make the character her own.”

In many ways, Boogeywoman is Wuornos’ story as she told it herself, buttressed by both feminine fury and girlish idealism. Though Aileen’s fists and hunting knife are generously wielded throughout this flick’s 100 minutes, there are delicate moments of connection with other women throughout that serve as counterweights to her bloodbaths, including with her husband’s daughter (Lydia Heast.) “I wanted to show colors of Aileen’s unexpressed (and at that time perhaps undiscovered) sexuality,” Farrands says. “I consciously wanted the scenes of female intimacy to be things that Aileen can only express in secret — firstly because I don’t think she was yet fully aware of her sexuality; I doubt very much that she even thought of herself as a lesbian at that point in her life.”

Boogeywoman is Wuornos’ story as she told it herself, buttressed by both feminine fury and girlish idealism.

When penning Boogeywoman, Farrands also took into consideration Wuornos’ own appetite for the movies, particularly old Hollywood fare in which women call the shots — both literal and figurative. From Disney-fied fairy tales to true crime, film, for Wuornos, remained an enduring sixth sense for making sense of life’s cruel cadences and finding dignity in the demoralizing. Boogeyw0man is sure to foil assertions that it boasts a gendered gaze, in large part because its gaze is that of the film lover, beginning to end. Opening with a scene from Jack Bernhard’s crime noir Blonde Ice (1948) where Leslie Brooks paraphrases Rudyard Kipling (“The female of the species is more deadly than the male…”) the feature readily positions Aileen as the heroine of her own waking nightmare — with a few glamorous costume changes along the way.

“I came across an interview in which Aileen professed her love of old movies and femme fatales like the strong women played by Rita Hayworth, Lana Turner, and Barbara Stanwyck,” Farrands says. “It made sense that they were kind of her role models; like Aileen, they represented the outsider; they had the kind of strength and daring and backbone that Aileen was forced to develop — by necessity — in order to get through the horrific circumstances she faced in her life.”

As for the notion that reviving Aileen all these years later is dangerous, Farrands considers neglecting her life a much greater threat. “I think we need to always re-examine the past — even the most heinous and uncomfortable aspects of the past. It is dangerous when people insist on dusting the past under the carpet, or by claiming it is somehow morally unjust to present it or question it in a new or different way; I don’t think we ever learn by forgetting.”♦