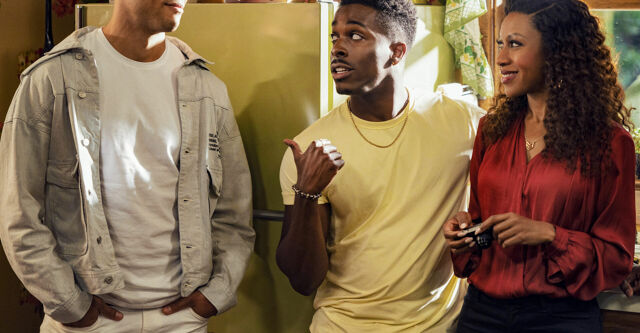 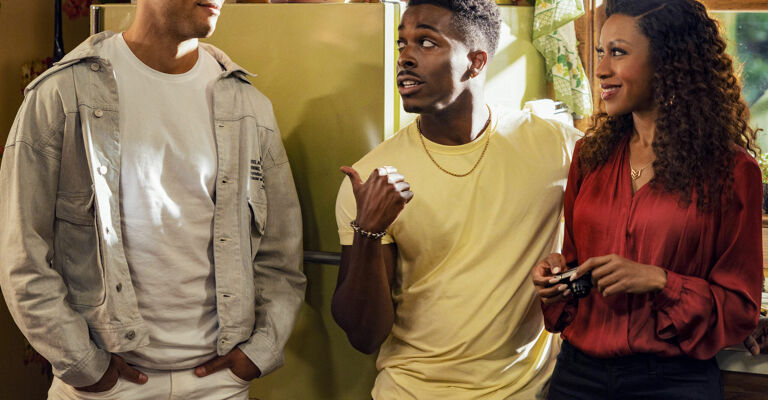 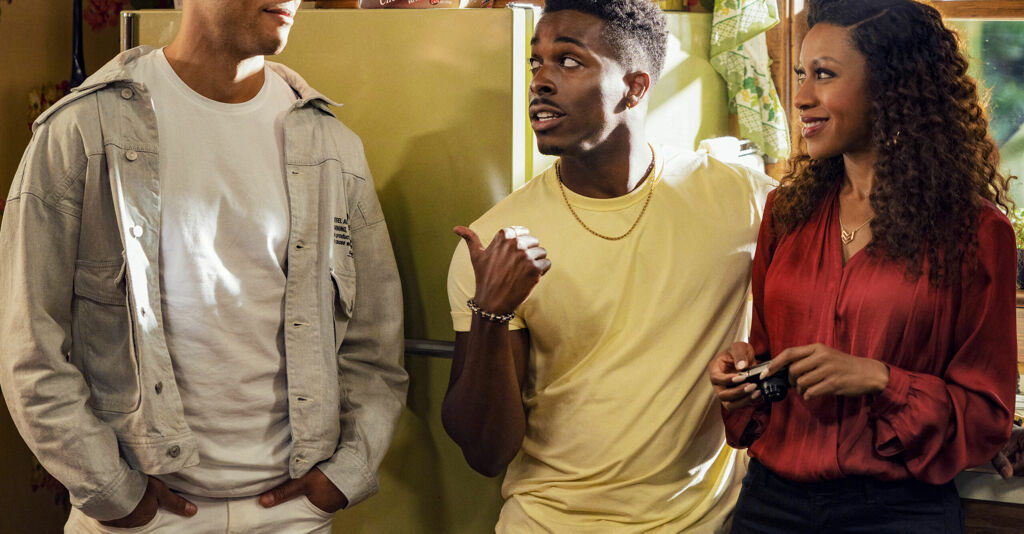 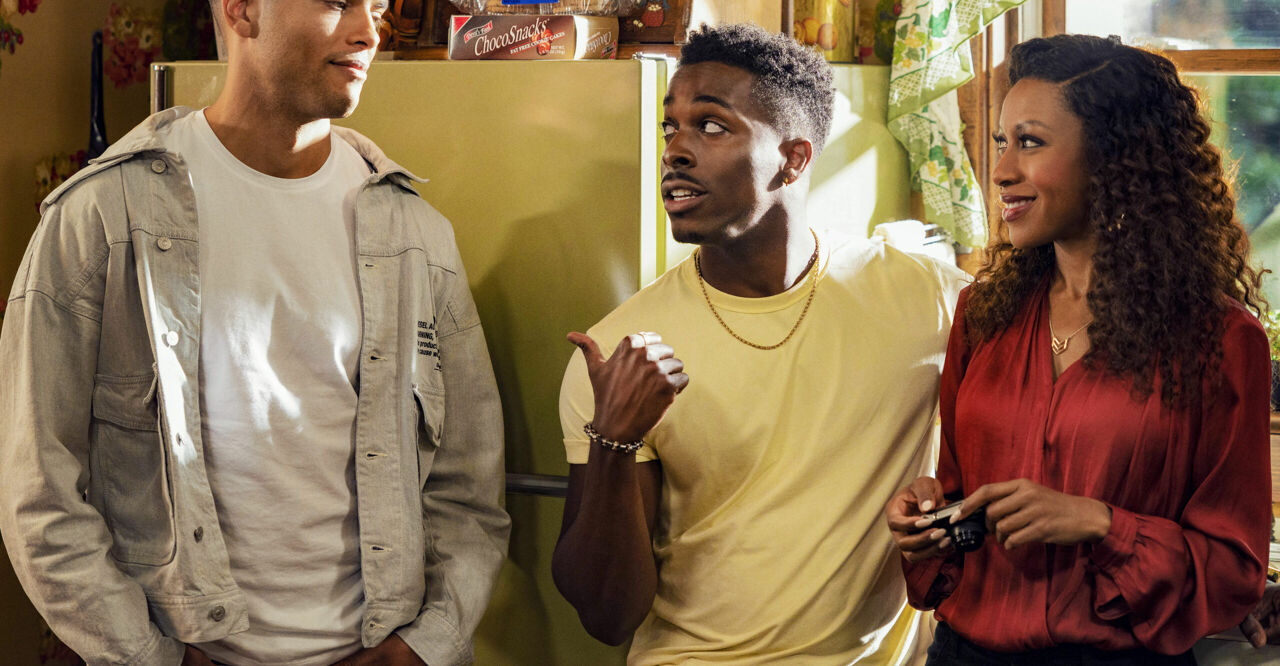 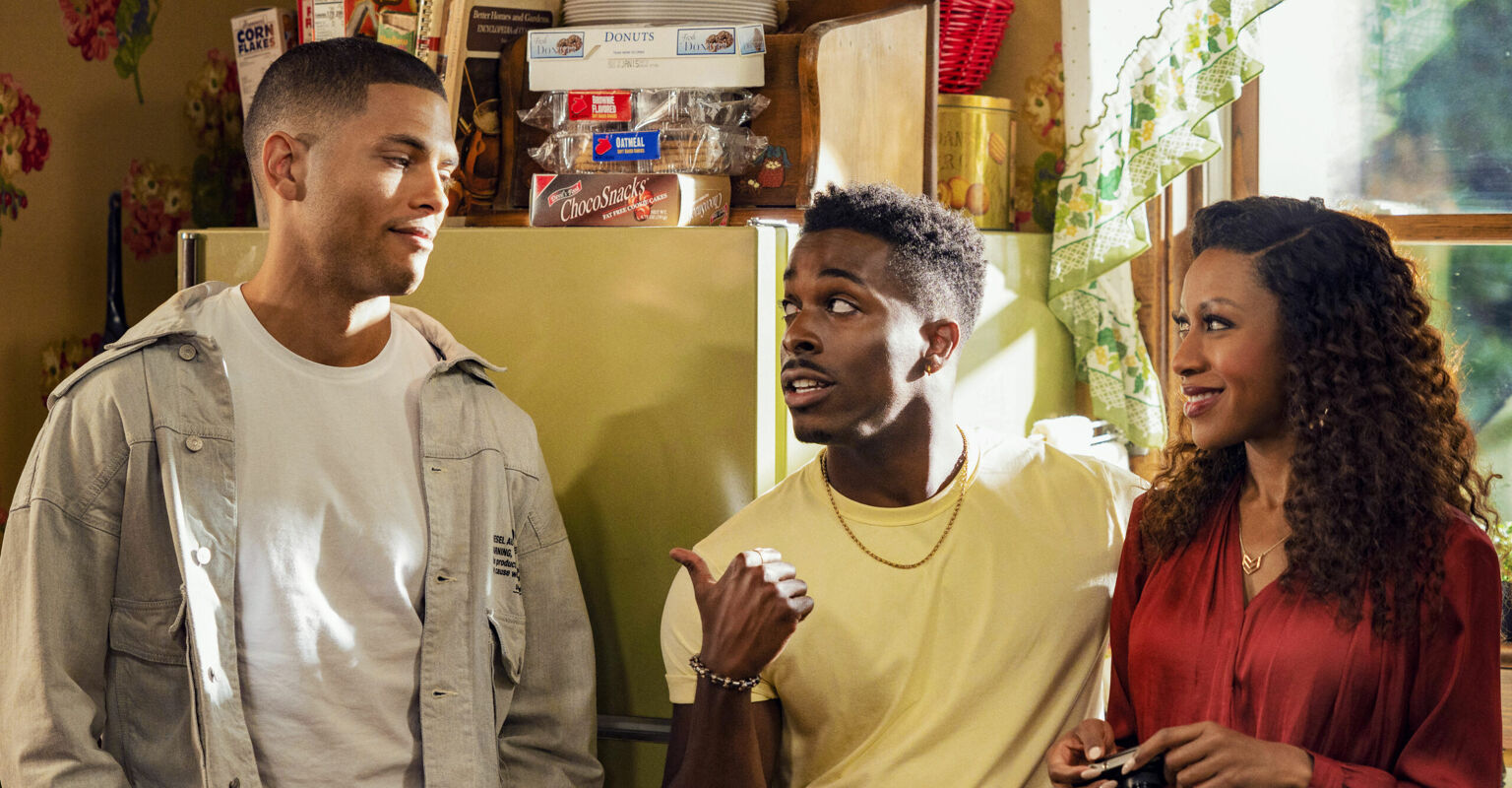 Brandon Black is a family man. Days before the premiere of A Madea Homecoming, now streaming on Netflix, he is cozy on his couch, with his mom and his dog sitting on either side of him. Black, 33, spent the previous day at the L.A. premiere of the movie, and he is exhausted. Still, he found time to chat with us via Zoom to talk about A Madea Homecoming, in which he plays Tim, the great-grandson of Tyler Perry’s iconic Madea character, and the first openly gay character of the Madea series.

“What I loved about Tim was that he is smart, opinionated, and well-spoken,” Black recalls of reading the script for the first time. “He’s got one small insecurity, but it’s not with himself, It’s with how his family is going to take it. I identified with that. But what sold me though, was how the family reacted to [Tim’s coming out]. I thought it was important to see, but [more fun] to play.”

“I felt truth in his audition and I thought, ‘This is the guy I want to play this role.’”

Black was born in San Francisco, but “became an adult” in L.A. He was drawn to acting by way of video games after falling in love with the story components of games like Halo and Resident Evil. His mom was also a film buff, and he remembers always hearing film scores coming from her bedroom when he was a child.

During the pandemic, Black auditioned online, via self-tape. He had three auditions that day, including this one, and was almost too tired to record and send in a video. He saw that casting director Kim Coleman was attached to the project, whom he had previously worked with on Dear White People, and decided to complete the audition.

“In every audition people bring something that resonates as truth…and I always look for truth,” Perry says of Black’s audition. “I felt truth in his audition and I thought, ‘This is the guy I want to play this role.’ I didn’t know very much about his life or his past, but I felt he brought truth to the role.”

Although Black is openly gay, this is his first gay role in a movie or series. For years, he has wanted to play gay roles, however, is very selective of the gay characters’ storylines.

“I want to be a little more clear as to what I want to see,” Black says. “I want to play things that I also want to see out there. I’m down to play what happens in the world, which is sometimes a lot of times gay people aren’t supported in their families. But with this, I just didn’t want the response to be like ‘We’re gonna pray for you. We’re gonna pray it away. In a comedy, I didn’t want to see that. If we’re going to do drama, and we’re going to get into the nitty-gritty of what people react to this with, sure, but I’m not trying to laugh about it.”

Filming during the pandemic wasn’t as difficult as Black imagined it would be. Director and producer Perry’s 330-acre studio acted as a COVID bubble. Black describes the first time seeing Tyler Perry Studios as an experience similar to Disneyworld.

Across the 330 acres, Tyler Perry has purchased homes to use for the neighborhoods in his films. He has also repurposed Victorian mansions and confederate buildings for film purposes.

“It was just so cool,” Black says. “This Black billionaire has repurposed offices where they were planning our demise, and now we’re shooting Madea movies in them.”

According to Black, some scenes were filmed in their entirety twice, as Perry had to get into his costumes to play both Madea and Joe. But the most challenging part to film was Tim’s graduation speech, which Black says had to be filmed in one take.

“The sun was going down when we were shooting, and later, some of the actors in the stands told me they couldn’t see me or hear me at all. The mic actually wasn’t on. And then I was like, ‘This scene is gonna get cut.’ And this is the scene I focused on the longest, and to me, wraps up the whole movie.”

Fortunately, the scene didn’t get cut, and after filming the end, Black got to see Perry channel Beyoncé, as he filmed the end credits portion featuring Madea recreate Beyoncé’s iconic 2018 Coachella performance.

There were “inception levels of stuff” going on, according to Black, who got to see someone he looks up to parody his all-time favorite musician.

Although Black says he had a lot of fun playing Tim, he says he would like to get into some darker roles, potentially working with David Fincher or Christopher Nolan. But for now, he has several other comedy and family-oriented roles in the books. In time, he hopes to prove his duality as an actor.

“The ultimate goal is to make these awesome, funny, family comedies, and then some other stuff here and there. I’m living my dreams.”♦