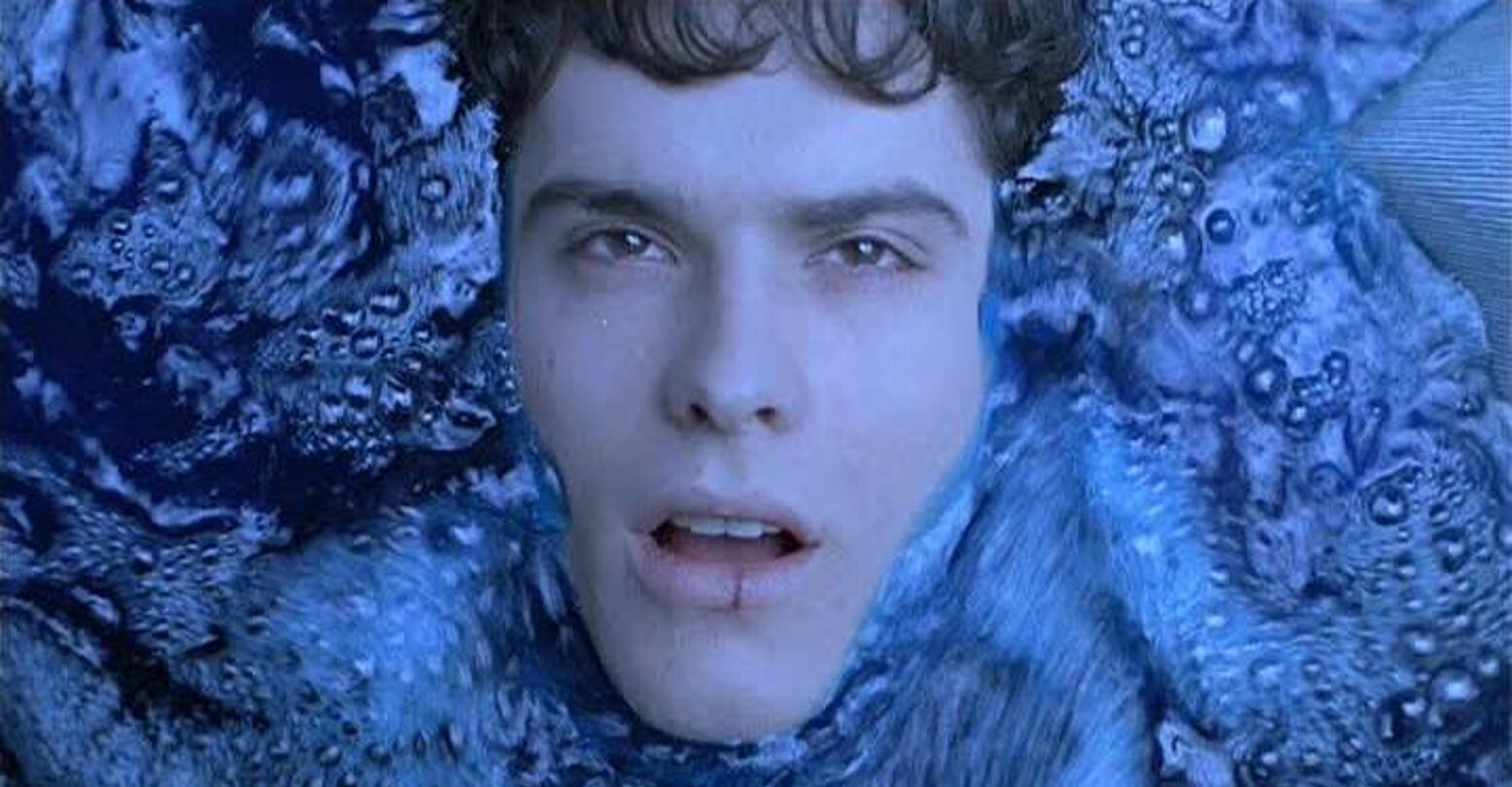 Last night, I was introduced to a hilarious entry in the camp canon: Frank Henenlotter’s Brain Damage, a 1988 film that’s about as unhinged as it gets.

Set in the pre-NYU takeover days of New York, the film concerns Brian, a young man who goes to bed with flu symptoms and wakes up with a slithering, talking penis puppet on his hands. Yup, that’s what happens. I swear I’m not making this up. This penis puppet is named Aylmer, and is apparently (as we learn about halfway through, because this movie is allergic to exposition) is an ancient creature who’s been passed on for centuries, finally falling into the hands of two professors. At the start of the movie, they’ve been harboring Aylmer in their bathtub and keeping him weak by feeding him animal brains.

Because what Aylmer really wants is human brains. And he has an extremely gay way of getting them.

It’s at this point that I will proudly point out that within the first five minutes of watching this film, I had already hit upon a convincing trans allegory. Because that’s what I do, for better or worse. And this movie, I have to say, makes for an incredibly easy trans reading.

Let’s start at the very beginning: when we meet Brian, he’s living with his incredibly hot brother Mike (Gordon MacDonald, aka Holly Hunter’s husband) and dating Barbara, a woman who is inexplicably attractive to both hot brothers. Brian and Mike live in the same apartment complex as the two professors who are sheltering Aylmer, and a few minutes in, Aylmer has already found his way into Brian’s bedroom, there to phallically implant himself on Brian’s body via a hole at the base of his neck. Brian wakes up bleeding and has no idea what happened, which is how I feel each and every time I get my period.

When we finally meet Aylmer—and what an entrance it is!—we see that he’s a small, extremely dick-shaped puppet who talks like a gay man from the 50s. You basically expect him to bust out singing a Cole Porter song, which is not far off from what actually happens later on. Waking up to find Aylmer attached to his body is disturbing for Brian, but quite frankly, we’ve all been there. If you’ve never woken up to find a talking dick attached to your neck, I can’t relate and I don’t know what to tell you.

But just wait, because things are about to get even worse.

Once Aylmer finds a “host” in Brian, he injects Brian with his “juice” (yup) in order to make Brian high and transport Aylmer around the city so he can eat brains, which is his main aim in life.

Not only is Aylmer himself queer-coded, he and Brian instantly enter into an S&M dynamic where Brian, high on Aylmer’s “juice”, is so dependent on that high that he’ll do anything Aylmer asks him to, including hitting up punk clubs and all-male showers in order to find those sweet, sweet brains. At one point, Aylmer even says to Brian, “I want you to beg me for it.”

The trans part of all of this is that Brian, who is basically in a drug-induced fugue state while Aylmer is attacking his victims, keeps coming to only to discover he’s covered in blood. “I woke up and felt something sticky in my pants,” says Brian at one point, in possibly the gayest sentence ever uttered in cinematic history. Brian waking up covered in blood also offers a pretty handy metaphor for the transmasc experience. Maybe I’m reading into it, but honestly, if the premise of waking up bleeding and instantly being introduced to a talking penis that tells you he’s going to take all your troubles away while injecting you with HRT isn’t familiar to you, what can I say, you’re clearly not a trans guy.

But it gets even more gay and trans than that. In a shower scene rivaling Friday the 13th Part 2, Brian goes to a hotel to detox only to find a stark naked Joe Gonzalez soaping up in the shower.

Brian, horrified to learn that he’s been an accomplice to multiple murders, even tries to detox from Aylmer’s “juice” at once point, to no avail. It’s here that we get Aylmer’s song, which would not feel out of place at any East Village piano bar:

We have to sit through multiple deaths-by-Aylmer-penetration before getting to the end, which—I don’t even think I can explain the ending, because I’m still not quite sure what happened. I only know that everyone who got addicted to Aylmer’s cum—sorry “juice”—dies foaming at the mouth, and Brian seems to enter another plane entirely.

But what makes Brain Damage a camp classic isn’t how incredibly gay it is—it’s the metaphor of addiction (specifically sex addiction) that makes the movie feel like it’s not just 80 minutes of dick puppetry (not to be confused with puppetry of the penis, which is a whole other kettle of fish.) As my friend said during Brian’s detox scene, “it’s like he’s trying so hard not to be gay.”