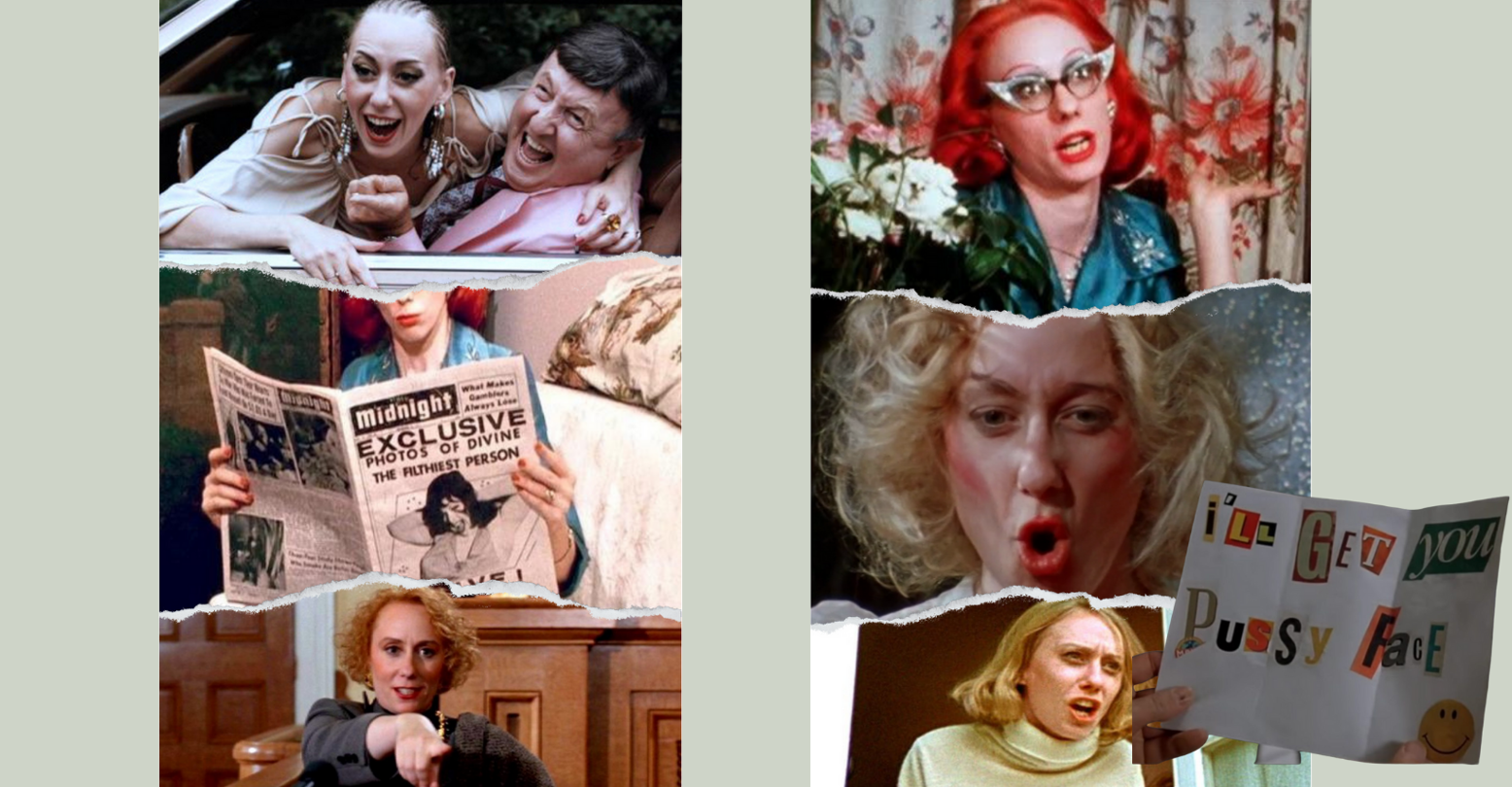 I can’t remember the first John Waters movie I saw. I grew up in the 90s and gravitated towards the punk scene, and with a deep penchant for subversive cinema, my exposure to his movies inevitably came sometime around my mid-teens. Those were formative, angry years, and—unsurprisingly—his characters spoke to me.

The one that sticks out most in my memory is Waters’ 1972 feature Pink Flamingos, a natural shocker with its singing butthole and poop-eating drag queen scenes. It’s pure anarchy on film. I remember being so excited to sit down at The Enzian—Winter Park, Florida’s art theater—as revival screening rolled out, ready to meet the folklore firsthand. I loved every second of it, and while Divine’s performance immediately etched itself into my soul forever, it was Mink Stole as Connie Marble that my friends and I ended up quoting the most.

In the movie, Connie Marble says into the phone, “I guess there’s just two kinds of people, Miss Sandstone. My kind of people, and assholes. It’s rather obvious which category you fit into. Have a nice day,” and hangs up.

Her dry, disgusted delivery hit a chord with us that to this day we cannot shake. Me and my childhood best friends Keith and Marcie left the theater repeating that line for weeks. Mink Stole had undoubtedly stolen our hearts. But how? Why? Perhaps because while Water’s larger-than-life muse, Divine, got the lines and characters that defined the film’s fantasy of anarchy, it was Stole who captured the raw yet contained adolescent bitterness we all actually lived. We felt her so deeply because, in many ways, we related to her.

Take Stole’s performance as Peggy Gravel in Desperate Living, throwing off a casual line like: “Go home to your mother! Doesn’t she want you?”

While I love Stole in all of Waters’ films, there are a few characters that are far more iconic than others. They’ve made such an indelible mark on us that Keith, Marcie and I quote them to this very day.

I love Hairspray, even though it’s the moment when Waters started to fail us punk kids. He “sold out” to Hollywood, and while at the time it was painful, as an adult I now understand why. Money and a secure future are pretty nice things to have. And even while “selling out,” he managed to deliver a polished film full of racial reckoning, feminist sensibilities, and homosexual anarchy. He gave us a body-positive main character long, long before it was cool. And while Stole’s role in this film isn’t nearly as big as it should be, we are gifted with the opus gag her character so desperately delivers to the dancing kids, “no grinding!” Her face of judgment forever stands clear.

Childish anger at full throttle, Tammy Davenport is Divine’s character, Dawn Davenport’s daughter. She is an unhinged brat that stands as the butt of a two-minute scene detailing all that is wrong with her. While the scene doesn’t stand the test of time (the R-word is used dozens of times), Taffy Davenport serves us the pristine line, “I wouldn’t suck your lousy dick if I was suffocating and there was oxygen in your balls!” Pinched-faced and pissed off attitude, Tammy Davenport chewed up every scene she had.

Good god, these are the filthiest people alive. At least that’s Connie Marble’s primary goal in John Waters’ inarguable masterpiece, Pink Flamingos. Nearly 50 years later, this move is still one of the most delightfully bizarre pieces of cinema ever made, and that’s largely thanks to Divine and Stole stealing the show. As the main antagonist to Divine’s filth-obsessed protagonist, Connie Marble struts across the screen with a heinous, stylish pomposity that only a person with true (bad) taste could love. To her oversexed husband she says, “Oh God, I love you more than the sound of bones breaking, the sound of a  death rattle – even more than the sound of my own shit do I love you, Raymond.” The two kidnap women to impregnate and then sell off the children. Never has it been so delightful to be in the presence of someone so awful.

What I’m about to share is sacrilege, but Desperate Living might be my favorite Waters film. That has everything to do with Ms. Stole. This movie is also unashamedly queer in every way. It’s so unhinged that at times you can’t believe what you’re watching. They just don’t make them like they used to, and Peggy Gravel is a singular character in this masterpiece. There will never be another moment like when she screams her demented monologue out the window at the top of the film. Marilyn Manson even sampled it on a secret track on their first album. Peggy Gravel and her housekeeper, Griselda, were the original broke-down Thelma and Louse. In her final scene, Peggy says to her enemy, “you’re so low, you make white trash look positively top drawer!” Top drawer? Yes, Peggy.

Dottie fucking Hinkle, thank God for you. When I tell you this character lives in the hall of screen infamy with my friends and me, I’m confident you have no idea how much I mean this. This gifted performance of suburban depravity is perhaps one of the most important to grace the silver screen. While Kathleen Turner carries Serial Mom, it’s her asshole neighbor Dottie Hinkle that brings it home. Having received a note reading, “I’ll Get You Pussy Face,” offscreen, we learn that Dottie Hinkle is a worthy opponent to Turner’s maniacal Beverly Sutphin. When Sutphin prank calls Hinkle on that split-screen, asking “is this the cocksucker residence?” we all fell in love. Pussywillows would never be the same.

Fun fact: Marcie and I once re-created that note, written in cut-out magazine letters like in the film, and taped it to Keith’s car in the parking lot. I think he saved it for years after that. He better have, at least.

Now that I’m thinking about it, I do remember the first Waters movie I saw. It was Hairspray, which makes sense given my age. Ricki Lake had her talk show in 1993, a sensationalist piece of daytime trash, and we loved her. It was essential after high school viewing. She had queers and club kids on the show and she never belittled them. She loved them, she lifted them up, and she tried in some way to make them be seen as human to everyone that seemed to doubt that. We loved her, and it didn’t take long for us to find everything Lake had done, which began with Hairspray.

In my dark bedroom covered in movie and band posters, Keith, Marcie, and I sat on my bed while the VHS player unspooled the shitty rented copy of the movie from 16,000 Videos. It was like so many other movies on so many other nights. Mink Stole didn’t have a big part in that movie—Divine and Ricki Lake were the stars of that particular show—but Stole’s role of assistant Tammy had us in thrall. We didn’t know we’d be quoting that woman’s lines for the rest of our lives.

Years later, I met Mink Stole at my office in New York, where she’d done a podcast with my boss. I don’t get nervous about meeting celebrities, but I got excited when I met Mink Stole. Seeing her standing in the hallway, I blurted out, “you have no idea how much I love you.” She shot me such a strange look and smiled wide before she said, “Why?!”♦