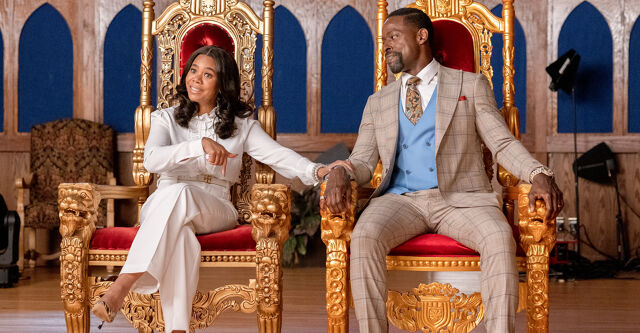 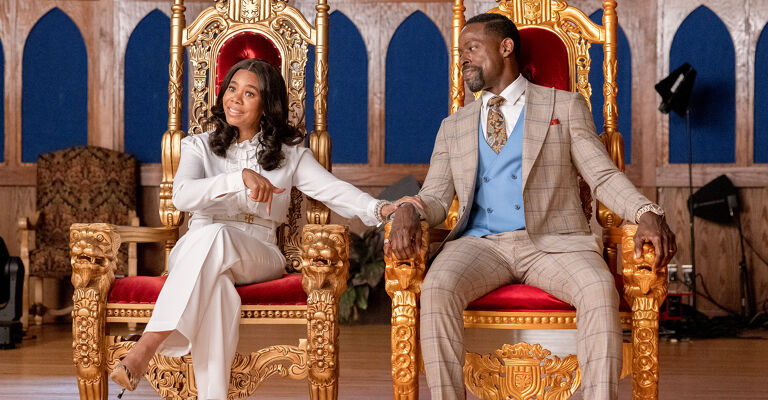 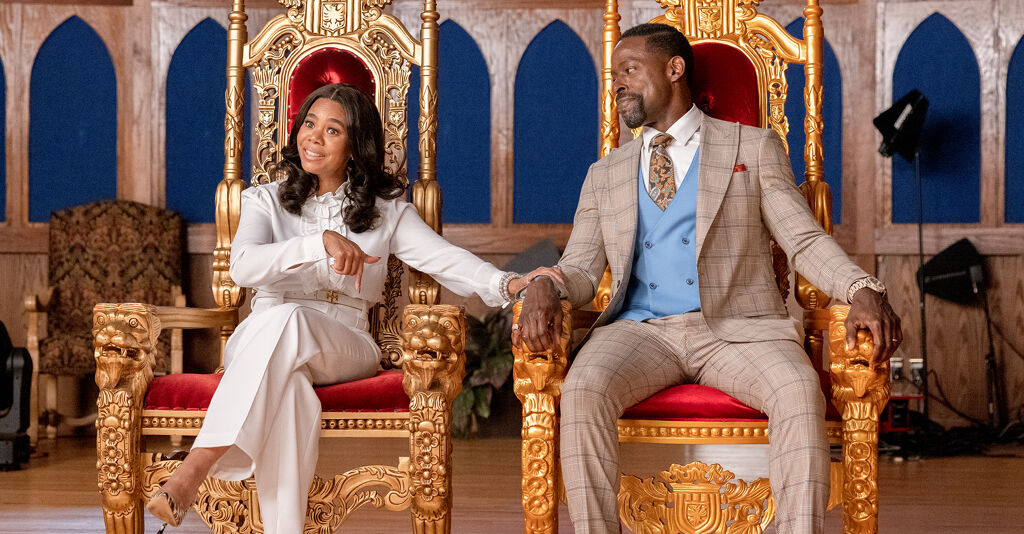 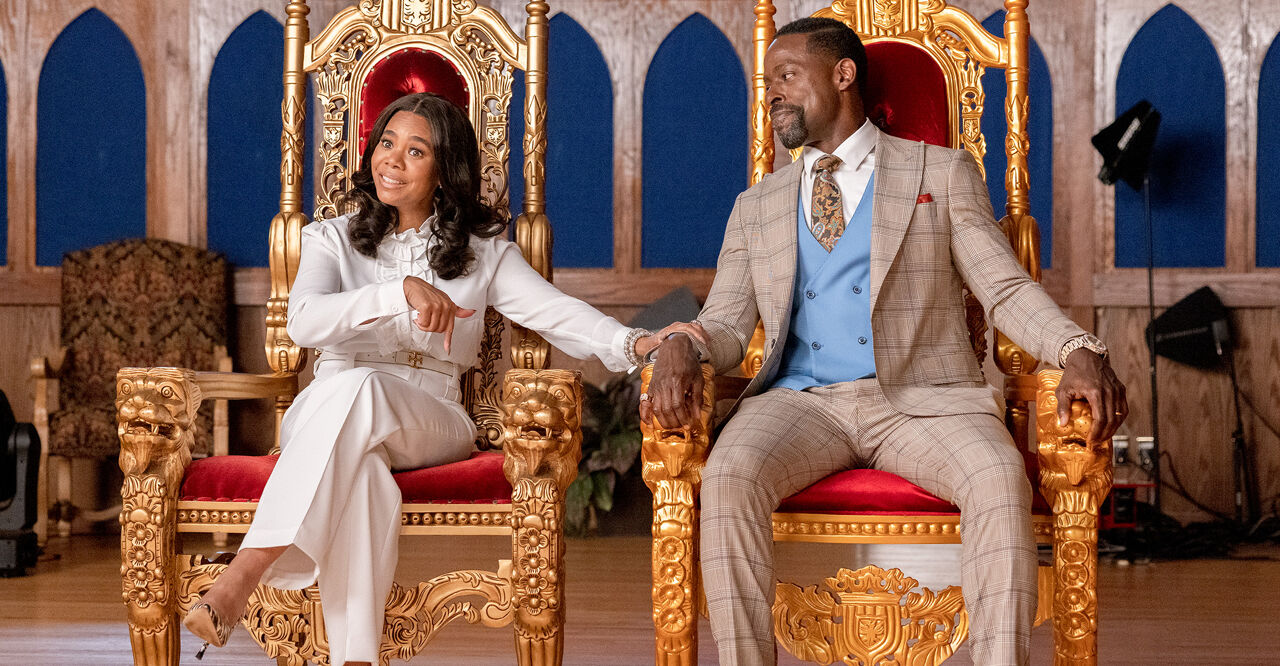 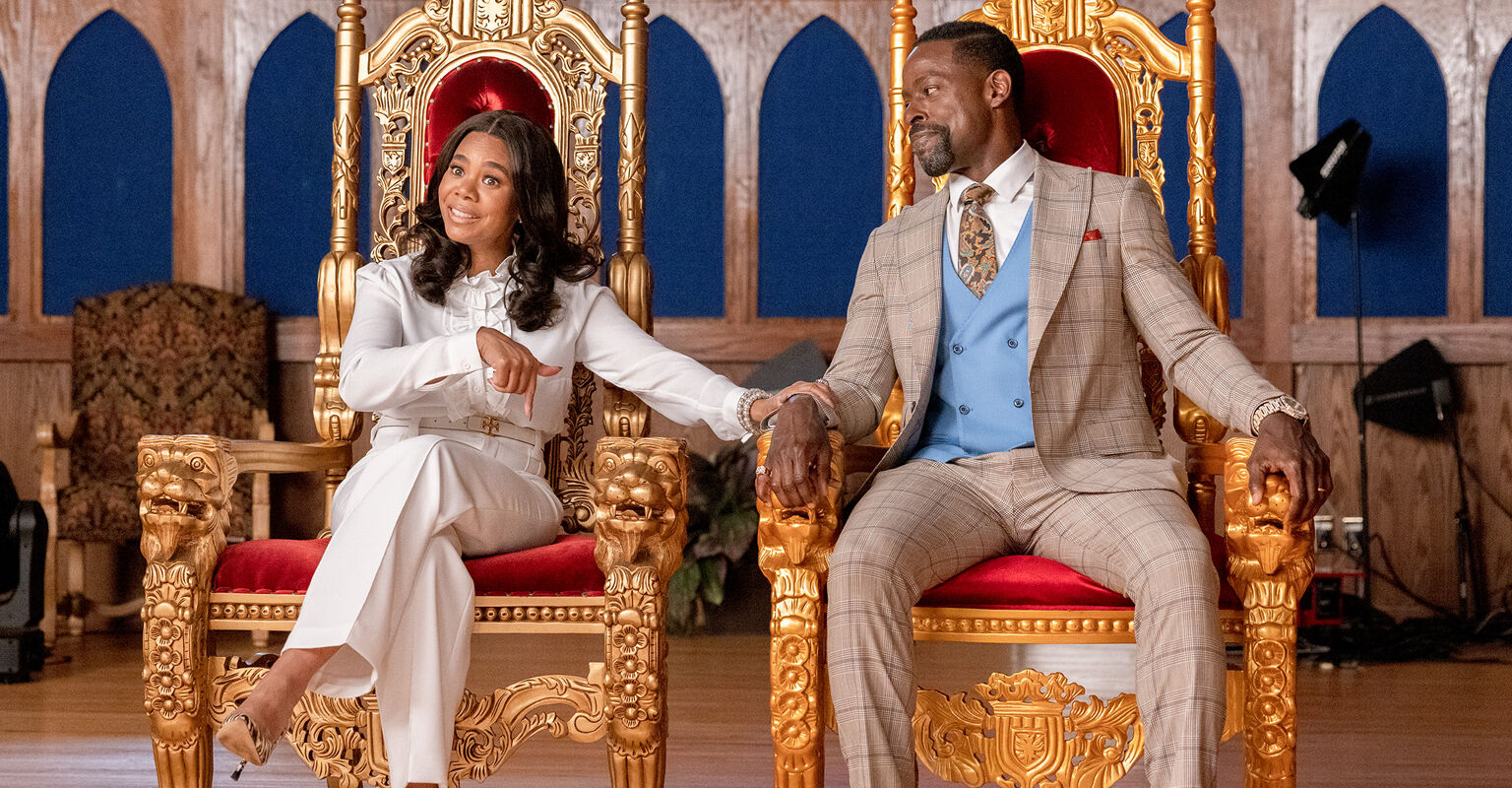 Adamma Ebo’s new satire Honk for Jesus. Save Your Soul. has been (rightfully) praised for saying the quiet part out loud about the role of women in church leadership, exposing the way they enforce the same patriarchal system that holds them back. The movie was marketed playfully, as a comedy about a husband and wife who invited a documentary crew to film the road to reopening their church after an undisclosed scandal. The first half of the film matches this upbeat vibe, but it comes as a shock when the truth behind the scandal is revealed. We learn that the husband, pastor Lee-Curtis Childs (Sterling K. Brown) had inappropriate relationships with multiple young men (aged nineteen and twenty-ish) in his congregation, regularly giving them gifts and offering favors.

The darker, brutally honest aspect of Honk for Jesus seems intentionally mis-marketed to spark outrage from a specific demographic of churchgoers (i.e. conservative Facebook aunties) who were, predictably, not happy with the depiction of megachurches as hypocritical, oppressive, and greedy. As someone who was raised in the church and left it for many of those reasons, these are the exact people who need to see their lives reflected on screen this way. Unfortunately, where the film—and the always phenomenal Regina Hall—excel as a quest for gender equality through the struggles of a pastor’s wife, it fails to represent her husband’s queerness as even remotely acceptable.

Honk for Jesus is initially a fun experience, but for queer viewers, there’s so much internalized homophobia and hurtful gay rep to unpack.

This pastor abused his power, manipulated young men, and continues to misuse church funds for his personal gain by paying them off. He should absolutely face consequences. But there’s no reason why the film’s entertainment value should come at the cost of reinforcing the idea that to be gay is something unquestionably shameful. Honk for Jesus is initially a fun experience, but for queer viewers, there’s so much internalized homophobia and hurtful gay rep to unpack. We see old VHS footage of Lee-Curtis preaching against “the homosexual agenda” of gay marriage to a cheering congregation; He stands on stage proclaiming that it “disregards, disrespects, and devalues” his own marriage to a woman. In the present day, when Lee-Curtis shouts “I am better, y’all!” it’s potent with the haunting energy of the “proudly ex-gay” narrative pervasive in the Christian community.

Throughout the film, we don’t know Lee-Curtis’ story, the history of his attraction to men, or any idea of what he feels about it. We only know that he wouldn’t want to risk his authoritative role by acknowledging it publicly. The film is focused on how his wife, Trinitie (Regina Hall) responds to Lee-Curtis’ behavior, so we mostly view his actions from her (wise, smart, visionary) perspective. Only two major scenes provide insight into Lee-Curtis’ queerness from his point of view.

The first takes place on a basketball court, where he flirts with a member of the documentary’s film crew. It’s disturbing and heart-breaking all at once, because there’s a dreadful delusion behind his excitement. It’s hard to watch as the evidence that Lee-Curtis’ inappropriate conduct knows no bounds continues to unfold. The lawsuits are wrapped up, he tells the younger man that they’ve “put all that rah-rah stuff to bed.” This compelling scene fluctuates from hilarious to cringe right through to creepy, as he propositions someone who is documenting the consequences of the exact thing he’s doing all over again. But it’s also devastating to see him use pick-up lines with a youthful energy that lights up his eyes. Sterling K. Brown’s stunning performance here builds room for the excruciating thought that pre-adolescence is the last time he felt any sense of carefree comfort around his attraction to men.

The second glimpse into Lee-Curtis’ heart happens on the street, where he’s promoting their upcoming megachurch reopening. We see tears well up in his eyes when a young man comes up to thank Lee-Curtis for the positive impact he’s had on his life, and encourages him to continue doing God’s work. The meaningful moment turns soul-crushing when the compliment gets wrapped in a statement that he doesn’t believe what everyone’s saying about the pastor —the “gossip” we know, and have just witnessed, to be true. It’s excellent screenwriting, and so moving when Lee-Curtis realizes that he will never be seen as good if he is attracted to men.

When Lee-Curtis rehearses his opening-day sermon after that conversation, he admits, teary-eyed, that he has felt suicidal. He does not consider himself a perfect man, he plans to tell the congregation, but he does believe that he is a great man. Lee-Curtis has convinced himself that life is worth living if he can save souls and do his ‘good Christian’ work. Every time we see Lee-Curtis quietly wiping away a tear before he allows it to fall, we feel the full weight of his pain.

Then we briefly meet one of his victims, Khalil. Queer actor Austin Crute’s unforgettable performance conveys the cockiness of youth and the rage of a man who was wronged. The actor grew up in Atlanta (where Honk for Jesus is set) as a pastor’s son, “in an environment where that stuff does not fly, he told Advocate. “I didn’t have anybody encouraging me to lean into queerness.” His character, Khalil, confronts Lee-Curtis in public while the documentary cameras are filming him. It’s humiliating when Khalil laughs in Lee-Curtis’s face, and then, with a challenging glint in his eye and the camera crew surrounding him, asks the pastor if he still likes him. It’s inspiring when he calls Lee-Curtis out for the abuse and reminds him of the damage he’s done. There’s pride and strength in Khalil’s spirit when he declares it unnecessary for the Childs to reopen their church, noting: “We’ve all been doing really good without you.”

I’m not asking for redemption for Lee-Curtis; I simply believe that even villains should be allowed the freedom of equal existence. There is so much that Lee-Curtis did wrong, but his queerness is not one of those things. It sucks that stereotypes like his love for fashion, combined with awkward attempted anal sex and embarrassment from the community, are the primary evidence of his queerness. Though the words are never stated outright, it’s obvious to the audience that the congregants left his church because it was men that he was involved with, and not because of the predatory power imbalance in the affairs. Shame and disgust infuse comments throughout the film: a radio call-in voiceover asks: “How could she [Trinitie] stand being with a man like that? Ugh, it makes my skin crawl.” It’s dark when we hear it first, but horrific once we know that he only had relationships with men. But there’s never a clarification or definitive differentiation drawn between his queerness and his unethical relationships with young congregants; They’re represented is as if they are one and the same.

I’m not asking for redemption for Lee-Curtis; I simply believe that even villains should be allowed the freedom of equal existence.

Creative license is often necessary to tell an engaging tale, but the way Honk for Jesus picked and chose what to gloss over and what to depict in stark, harsh reality feels less like thought-provoking satire and more like a reminder that queerness is to be hidden away. In the film, all but five of their 25,000 congregants leave the church. In reality, it’s unlikely that so many people would flee. Churchgoers of all denominations have a history of committing to a certain level of blind loyalty when it comes to their pastors, especially considering that the Childs’ rival church has a younger husband and wife co-pastoring, seemingly without any doubt or pushback from the community. Women preaching in the church is a divisive issue as filled with contempt and generational belief in what’s righteous as the patriarchy itself. Yet in Honk for Jesus, their co-leadership is easily accepted by congregants of all ages. And still, no one considers even for a second that Lee-Curtis could (or should) be openly queer. The film took some brilliant liberties with its storytelling, providing a nuanced, clear reflection of Black Christian womanhood that is fair to Regina Hall’s character; I just wish it extended a fraction of that grace to its queer protagonist, and its queer audience.

Not once is acceptance of queerness even raised; not a whisper of contemplation about potentially coming out or renouncing his homophobic sermons is uttered. It is simply not an option. The terror we see in Lee-Curtis’s eyes is a response to the thought of losing his powerful position in the community—as well as the money, praise, and purpose that it comes with. He doesn’t think for a second that he could have a life filled with genuine love and affirming sex, and Honk for Jesus offers no reason for him to ever question that hopelessness. How disappointing to use someone’s queerness as a plot device and then regard their sexuality as something unworthy of acceptance.

Films have no responsibility to model an ideal world, or represent every character as morally good, but Honk for Jesus. Save Your Soul. felt like a loss for queer audiences. It does a huge disservice to a demographic that is strongly impacted by the harmful effects of the mega-church industry that the film aims to critique, especially when people who grew up in the church and were shunned by its messaging are a readily available, enthusiastic audience in need of a comedy that takes a sharp, honest look at the community.

What hurts most is that the film initiated incredible, long-overdue conversations in church communities and Christian families, but felt no need to make the conversation queer-inclusive, going so far as to reinforce the narrative that harms queer people every day. The church is hypocritical, and there must be frank dialogue about it —but that dialogue needs to include queer people. Instead, Honk for Jesus is a gradual, firm press into the bruise that is the queer Christian experience.♦