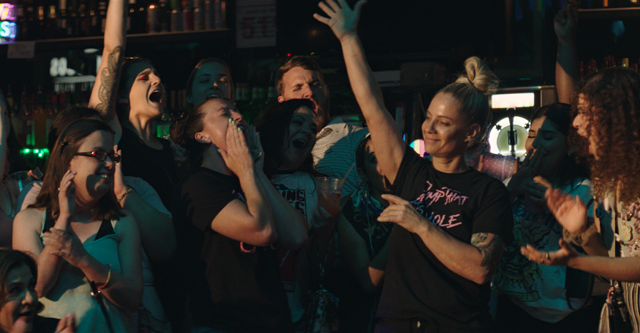 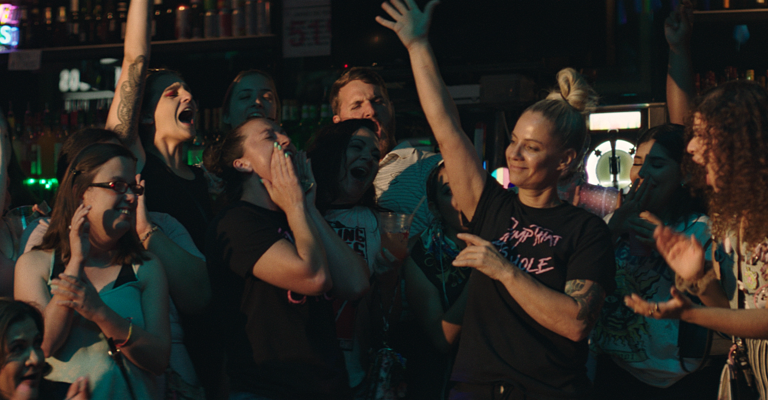 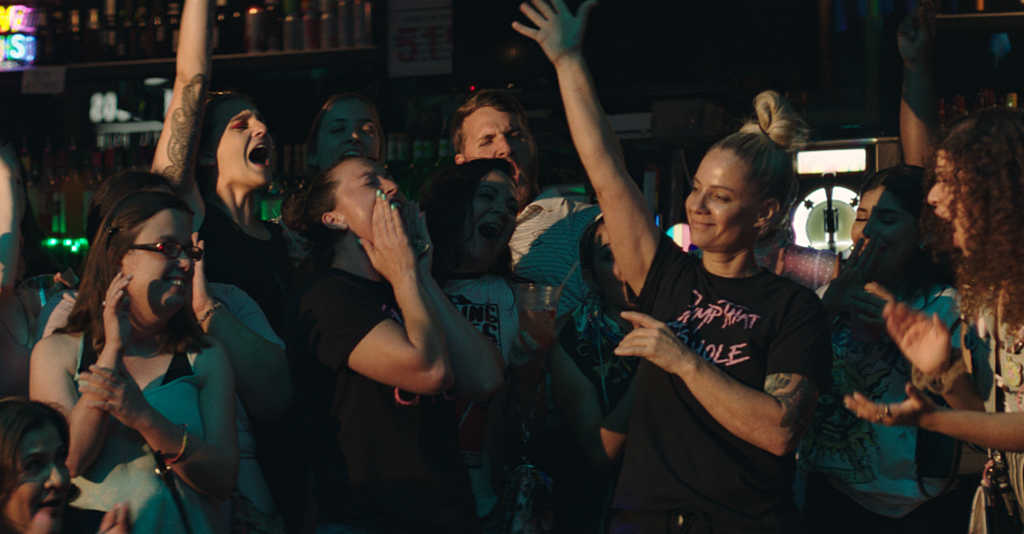 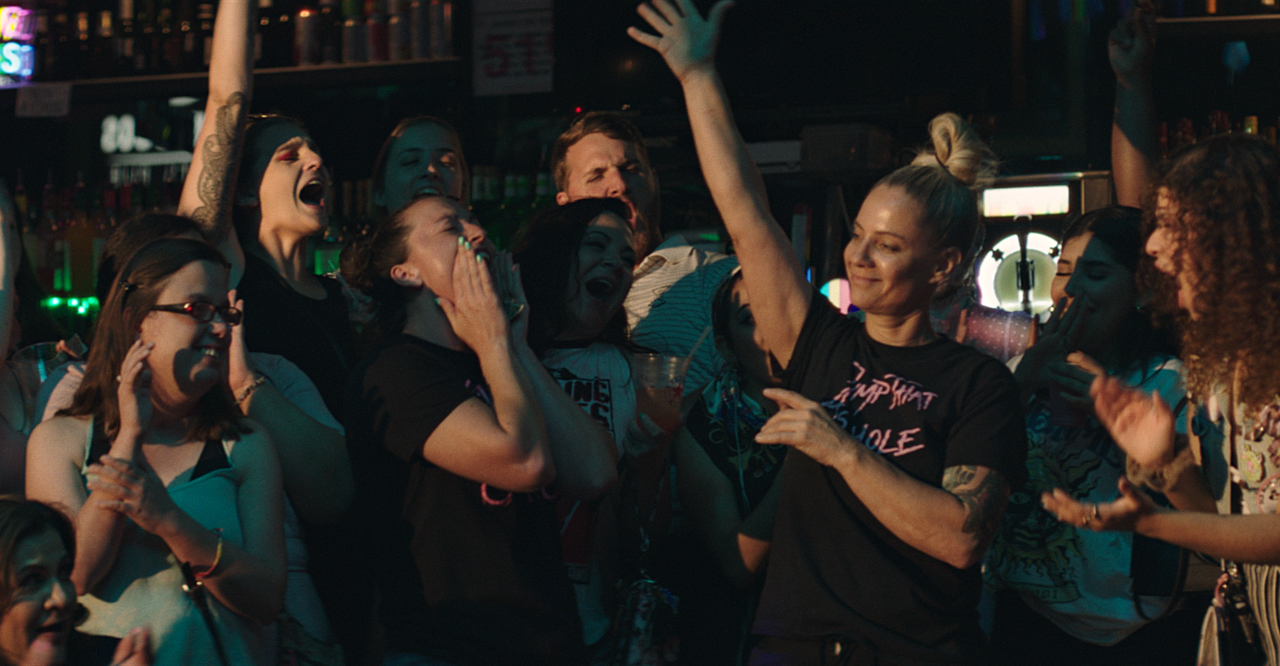 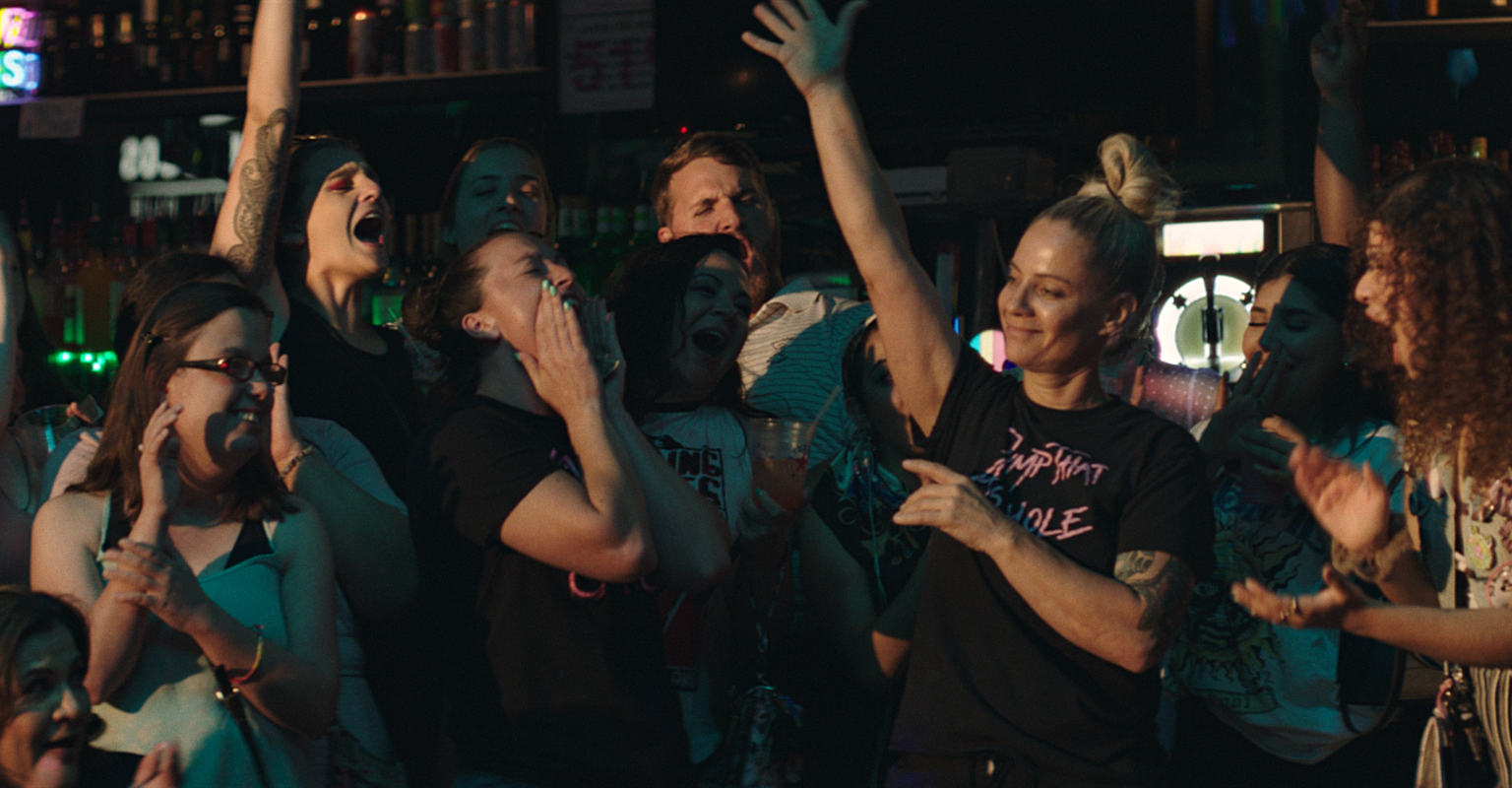 There are, at last count, fewer than 25 lesbian bars in the U.S. That’s a far cry from the hundreds that existed back in the 1980s, but the ones that survive have done so by planting deep roots in the communities where they operate. Now, a new docuseries on Roku is highlighting three of these lesbian bars, each of which is defined by the character of the queer community they call home. And in light of yesterday’s horrific shooting at Club Q, it’s unfortunately as timely as ever.

The show’s creators, Erica Rose and Elina Street, were behind the original Lesbian Bar Project, a fundraiser they launched at the onset of the COVID-19 pandemic to support struggling bar owners. The PSA video they created raised over $100,000, distributed to bars across the country. It was the ideal lockdown project for two filmmakers whose industry had evaporated overnight. “We were left with nothing but ourselves and our conversation over the phone,” said Rose, who was introduced to Street by a mutual friend several years ago. “That’s when our focus shifted to making something that was meaningful to us.”

With support from Jägermeister, the German liqueur company that’s been a vocal advocate for LGBTQ+ rights, Rose and Street produced a short documentary in 2021, which raised more money and served as proof of concept for a bigger project. With Lea DeLaria as host, the new Roku docuseries is a touchingly rendered, intimate view into a beloved but endangered queer ecosystem. Lounging in an armchair on a gilded, midcentury-style set, DeLaria – whose chyron announces her as “Lord of the Lesbians” – takes viewers to The Pearl (Houston, TX), Boycott Bar (Phoenix, AZ), and Henrietta Hudson’s (New York, NY), introducing us to the queer women who have kept these spaces open against stiff odds.

“But this isn’t a sob story,” DeLaria cautions with a flirtatious grin, sporting chunky Edith Head spectacles and a gravity-defying fauxhawk. “This is a series is about resilience, chosen family, and the power of community.” And she’s right – the show is anything but dreary. Challenges abound for each of these bar owners, from pandemic shutdowns to the deaths of loved ones, but The Lesbian Bar Project smartly focuses on what’s keeping these places thriving, rather than bemoaning the fragility of their survival.

“Let’s transcend the narrative of trauma and loss and disappearance,” Rose said of the filmmakers’ creative vision for the show. “Let’s talk about the power of community and resilience, let’s talk about these people who are charting new paths for queer individuals in their communities.”

That approach allows not just for a more uplifting narrative, but for a deeper exploration of each bar’s unique character, and the people – owners, but also staff and dedicated patrons – who are keeping the lights on. In Houston, Pearl Bar owner Julie Mabry talks about how Texas’ recent assault on LGBTQ+ rights has reinforced her bar as a space for defiant celebration. “In the bar business, you feel it directly,” she says. “Being a safe haven, this is where that conversation comes up.” Pearl hosts a drag revue, Kings of Houston, which features performers from across the gender spectrum. Ian Syder-Blake, who hosts and directs the show, says many other venues were wary of a show anchored by trans performers rather than traditional drag queens, but Mabry welcomed his show with open arms. “I know there are many more people here who love me for who I am than who want to change me,” Syder-Blake says.

“This is a series is about resilience, chosen family, and the power of community.”

Audrey Corley bought her first bar for $40 in a scrappy Phoenix neighborhood; several years later, she’s the owner of popular Boycott Bar, where she serves as everything from employer and friend to mentor, coach, and surrogate parent for a devoted community of staff and regulars (she’s also a literal coach, for a local college basketball team). Phoenix is 43% Hispanic, and Boycott Bar’s clientele reflects that, with staff and patrons alike shifting seamlessly between English and Spanish. The bar – and Corley herself – have served as critical support systems for young people struggling to come out in religious families, and as a welcoming space where being both queer and Hispanic is the norm, not the exception. “I love seeing strong, beautiful Latina women doing their thing in here,” Corley says. Many of Boycott’s patrons are undocumented, and many regularly drive long distances to be in a safe queer space, often bringing other queer family members along. “It just became a family bar – it’s like a family gathering,” one patron puts it.

That commitment to community was part of why Street and Rose selected these bars to highlight. “There are people who drive three hours to go to these bars,” Elina Street said. “I think that punctuates just how crucial these spaces are for underserved communities – especially where queer rights are under siege.”

The Lesbian Bar Project smartly focuses on what’s keeping these places thriving, rather than bemoaning the fragility of their survival.

Even in places with robust LGBTQ+ support, keeping a lesbian bar open is no small feat. We lesbians are a famously fickle clientele, transitioning with ease from “single, horny party animal” to “devoted co-parent of rescue animal” in nary a week, which is a nightmare for anyone whose revenue depends on our regularly leaving the house. But bless those hardy souls who do it anyways. Lisa Cannistraci, star of the project’s final episode, has been doing it longer than most: she’s owned and operated Henrietta Hudson in New York City for over thirty years. With her gravelly Brooklyn accent and a boisterous laugh, Lisa embodies old New York, but she’s kept Henrietta Hudson (Hen’s, as we fickle lesbian party animals call it) alive by staying keenly responsive to the city’s changing LGBTQ+ scene.

Cannistraci explains how, in 2011 – scalded by a gaggle of young queers who laughed at the idea of going to Hen’s – she radically reimagined the bar, adding new DJs, fresh music, and a reinvigorated atmosphere. She also shifted Hen’s target audience: “We went from a lesbian bar to a lesbian-centric, queer human bar.” That this transition was rhetorical made it no less powerful: as notions of gender have changed, so too has the demand for gender-inclusive queer spaces. Cannistraci’s young staff – many of them trans and non-binary – speak warmly of the welcoming environment that Cannistraci has built. “I feel safe to feel fully myself,” says one young bartender. “I was so happy to find a place like Henrietta’s.”

Looking at queer women’s culture more broadly, the shift from “lesbian” to “lesbian-centric queer human” hasn’t been without controversy. Some older lesbians who fought to carve out women-only spaces have calcified into TERFs, hostile to the notion that trans women and nonbinary people belong there, too. On the other end, the disintegration of gender as a firm category casts a sort of existential question mark over the word “lesbian,” which is rooted, after all, in gender.

Given the fraught uncertainties that hover around the term, I asked Street and Rose why they chose to call it the “Lesbian Bar Project” in the first place. They replied that using the term lesbian bar felt important, as a way of honoring the past, but also to celebrate the evolution of language, as lesbian becomes a term that’s inclusive of more gender expressions.

“It’s a word that’s inspired a lot of dialogue,” said Rose. “And it’s one that we wanted to hold as a preserver of history, and to show through our storytelling that this word is inclusive of so many different types of people.”

“We don’t have to be so militant and rigid about what a lesbian is,” added Street. “Culture has always moved.”

As The Lesbian Bar Project makes clear, lesbian bars still play a crucial role in supporting and nurturing queer community across the country, for women and for many others. The ones that survive have done so by responding to the communities they call home, reflecting their diversity and welcoming their collective spirit in equal measure.

“We might be small in numbers,” as our Lord of the Lesbian Lea DeLaria assures us from her armchair. “But we’re big where it counts.”♦