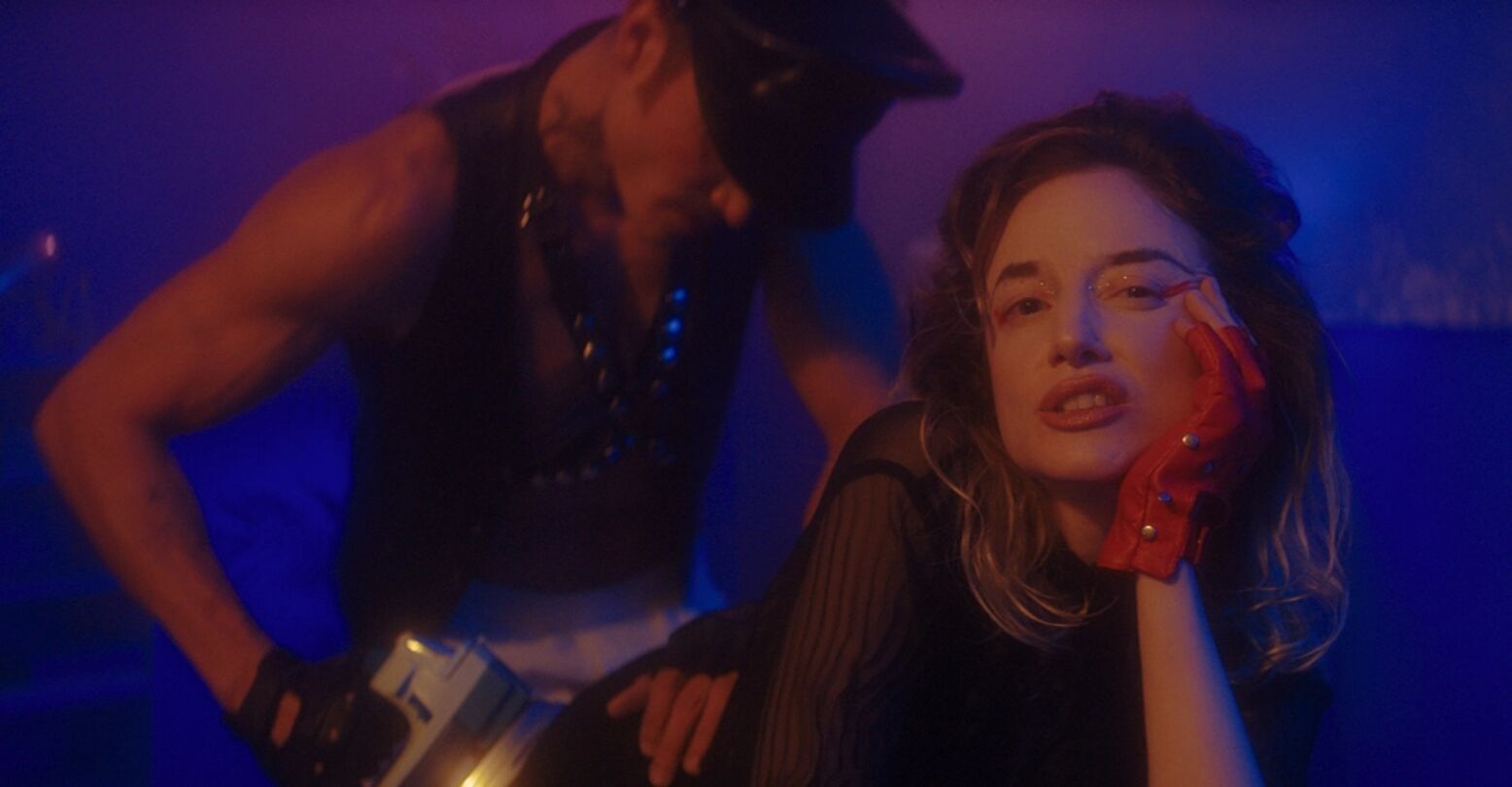 Please, Baby, Please sets its tone from its very first moments. A group of leather-clad tough boys jaunt down a midcentury city street at night, pantomiming their exaggerated masculinity while the opening credits start rolling. It’s a dance sequence straight out of an off-Broadway production.

The film follows Arthur and Suze, a newlywed couple moving into the slums of Manhattan circa 1950-something. When the two cross paths with The Young Gents, a notorious greaser gang, Arthur makes the mistake of locking eyes with one of the men. The encounter leaves the couple shaken and beginning to question their relationship, as well as their genders. While Arthur doubts he is man enough to protect his family, Suzy steadily rises to fill the void.

Please, Baby, Please lovingly uses the conventions of its source material to create a strange and surreal portrait of mid-century American gender angst. It’s like finding David Lynch by way of John Waters.

Please, Baby, Please takes many cues from the theater world, with wide, color-coordinated sets for its actors to galavant around in while waxing poetic about their gender anxieties. That’s not even taking into account the manner in which the actors deliver their lines: Each word feels like they are about to break out into a song and dance number, and a few times they do just that. It’s a film that lovingly uses the conventions of its source material to create a strange and surreal portrait of mid-century American gender angst. It’s like finding David Lynch by way of John Waters.

Despite exploring gender inversion and specifically butchness/trans masculinity, Please, Baby, Please is sadly (and perhaps deliberately) disinterested in exploring trans femininity. While Suze’s gender crisis leads her to adopt male clothes and attitudes, Arthur’s crisis remains one concerned only with his sexuality. When the subject is brought up, it is immediately shot down with Arthur defending his masculinity and his accuser making a seemingly tongue-in-cheek remark about genital inspection. Perhaps it’s not the most important element in a film centered primarily on exploring masculinity. However, the choice to not explore gender variance with Arthur as fully as with Suze feels shortsighted and imbalanced at best, and definitely leaves a bad taste.

Beyond that small hiccup, Please, Baby, Please is exactly what it says on the tin. It’s a sultry and hyperstylized portrait of 50s masculine performance and how queerness both disrupts and reinforces the codes of honor, bravado, and violence required to be a man. Furthermore, the film expertly plays with what it means to be seduced, by a person or gender itself. After all, what’s sexier than being seduced by a group of salacious queer criminals in the big city?

Finally, a film made for sad trans girls who had a supportive environment and somehow fell into their transitions without really knowing what they were doing. I’ve never felt more seen and represented than at this point.

My Emptiness and I is about Raphaëlle, a young French trans girl living in Spain. After a bad hookup, she goes to a psychologist who immediately diagnoses her with gender dysphoria and starts her off on her transition. The film follows Raphaëlle, or Raphi, as she navigates her transition, specifically in her relationships and in building self-confidence.

The film is actually based on Raphaëlle’s own experiences, and has her re-enacting many moments she’s already lived, a meta film technique which escalates even further by the end, in a scene which involves her speaking to a theater director about said experiences. By sticking so close to actual events while using cinematic techniques, coupled with Raphi playing herself, My Emptiness and I creates an incredible amount of authenticity, and it shows.

Finally, a film made for sad trans girls who had a supportive environment and somehow fell into their transitions without really knowing what they were doing.

While Raphi tackles more ‘generic’ experiences of coming out as trans, such as dealing with chasers and dating men who are ashamed of being with a trans girl, what sets the film apart is its authenticity, and its structure, with roughly four sections of the film based on the bio she chooses for herself on Tinder. Rather than a gradual acceptance, Raphi’s self-confidence ebbs and flows, as reflected through the way she puts herself out into the world. It’s a far more realistic and naturalistic approach that supports the film’s interest in properly recreating Raphaëlle’s story for an audience.

My Emptiness and I respects its subject and trusts her authority on her experiences. The rest of the film follows suit. For instance, while the question of bottom surgery dominates much of the film’s runtime, the discussion about what it means is had by a trans support group filled with actual trans women talking about the practicality of the surgery as well as their thoughts and opinions on where they stand on issues of femininity and themselves. Ultimately, that’s what makes My Emptiness and I such a refreshing film. In a cinematic environment where trans women are often isolated and treated as a means to an end, this is an empathetic and lived-in story. Trans women in this film are shown as women, capable of making their own choices and relying on each other when they need to. It’s something so obvious, and a shame that more films don’t follow suit.

Private Desert follows Daniel, a police officer on leave following an incident that left a cadet on life support. Daniel spends his time working security for a nightclub, taking care of his dementia-ridden father, and sending nudes to his long-distance girlfriend Sara. When Sara suddenly stops responding, Daniel embarks across Brazil to try and find her to get answers.

The film starts off incredibly strong as a character study of a prototypical ‘hard’ man who is closed off from his vulnerability.  He’s haunted by the mechanics of masculinity instilled in him by his father, a man who’s forgotten a lot but remembers how to put on his uniform and load his service weapon. It’s a terrifying exploration of the ways masculine socialization operates long after it’s been instilled, personified by Daniel’s slowly stretching out his finger from under the cast he wears for most of the film. It’s an interesting concept that gets thrown out as soon as Daniel finally meets Sara in person at the midpoint of the film and discovers that (SPOILERS FROM HERE ON OUT!) Sara is somewhere on a drag queen/GNC/Transfemme spectrum and lives their everyday life as a man named Robson.

It’s a double-whammy of both Trans Oscar bait coupled with a little-examined reproduction of the Manic Pixie Dream Girl, as Daniel unlearns his toxic masculinity primarily through being saved by the romance he has with an ‘unconventional’ girl.

It’s a reveal that I was dreading, and one that steers the films away from doing something more original and back into the firmly entrenched genre of Oscar-bait (or Cannes-bait) film in which queer (and potentially trans) suffering is used to take the place of emotional or spiritual depth. While Sara/Robson thankfully does survive the film, the life they built for themself is ultimately destroyed at the hands of an objectively violent and repressed man plastering their picture around a small conservative town. It’s a double-whammy of both Trans Oscar bait coupled with a little-examined reproduction of the Manic Pixie Dream Girl, as Daniel unlearns his toxic masculinity primarily through being saved by the romance he has with an ‘unconventional’ girl.

Private Desert makes me angry, but not because it’s a bad film. The cinematography, acting, and directing are all phenomenal. Likewise, there is an expert balance created in the tension Daniel feels between his desire and his capacity for violence. One club scene in the middle of the film in particular demonstrates this tension between longing, heightened emotions, and the thrill of the chase. Therein, however, is what’s frustrating about films like this. Social dramas are only as strong as their internal politics, and Private Desert allows Daniel redemption and love because he chooses to only emotionally harm a queer person rather than physically. It’s incredibly tiring, and has been since this particular subgenre was established long ago. We deserve much better than this.♦