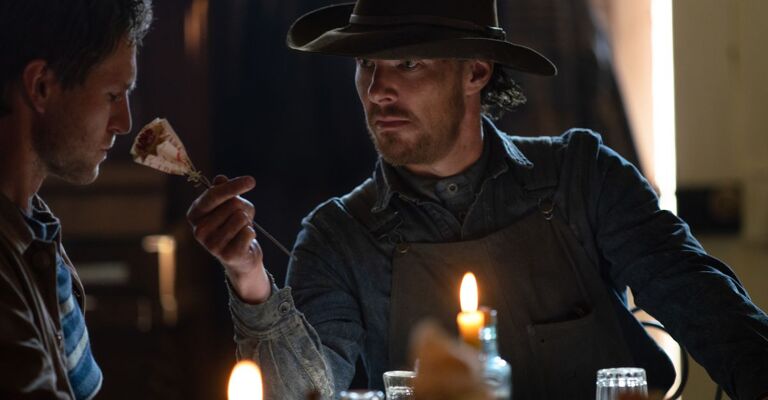 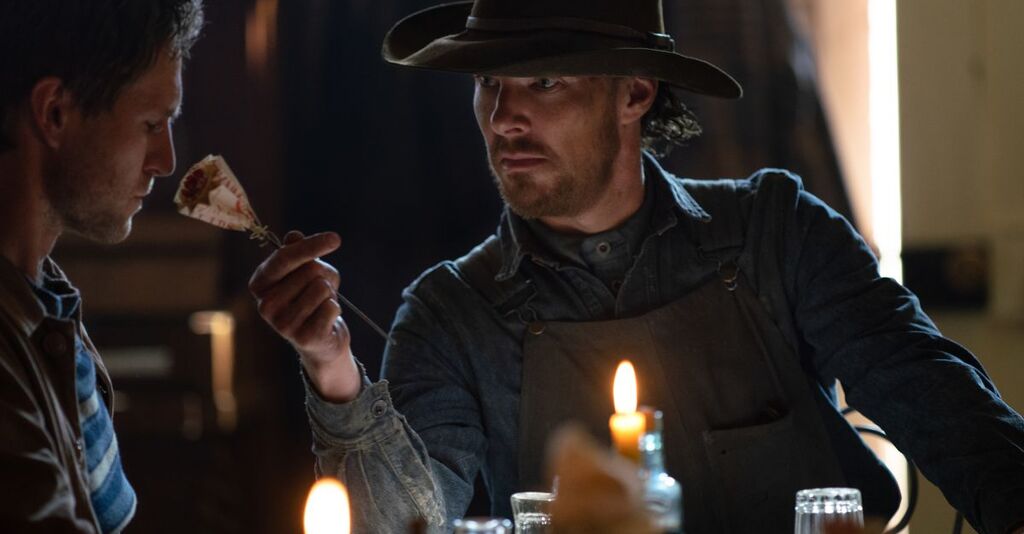 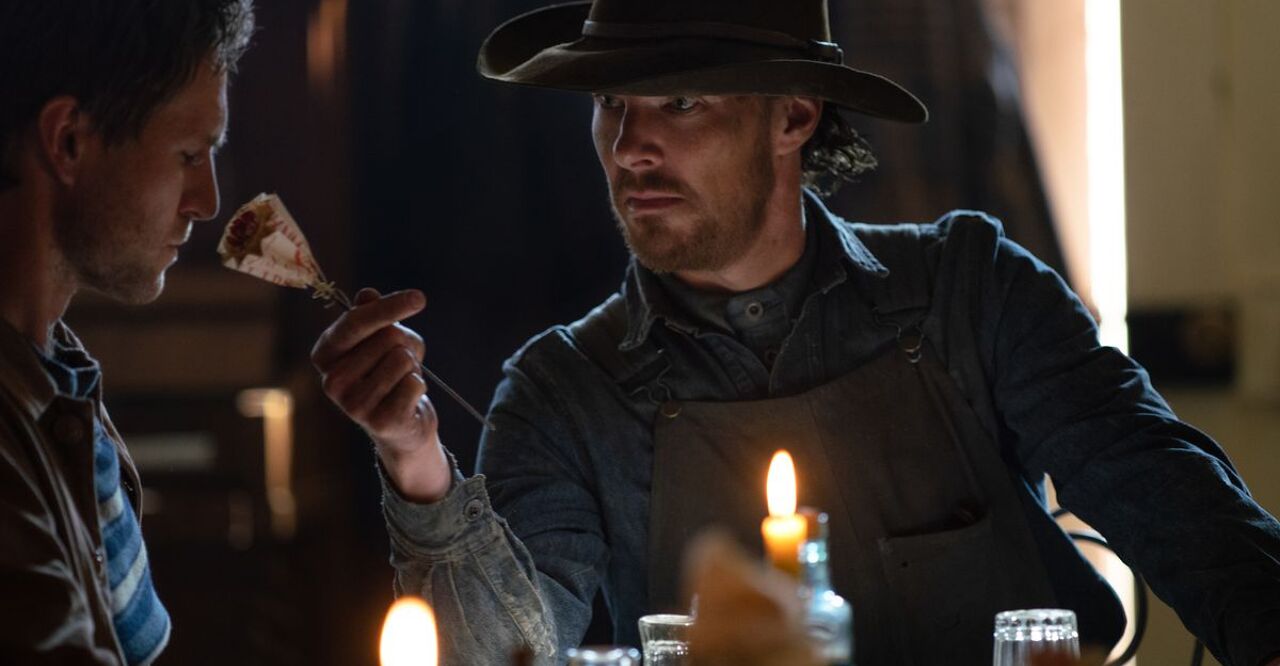 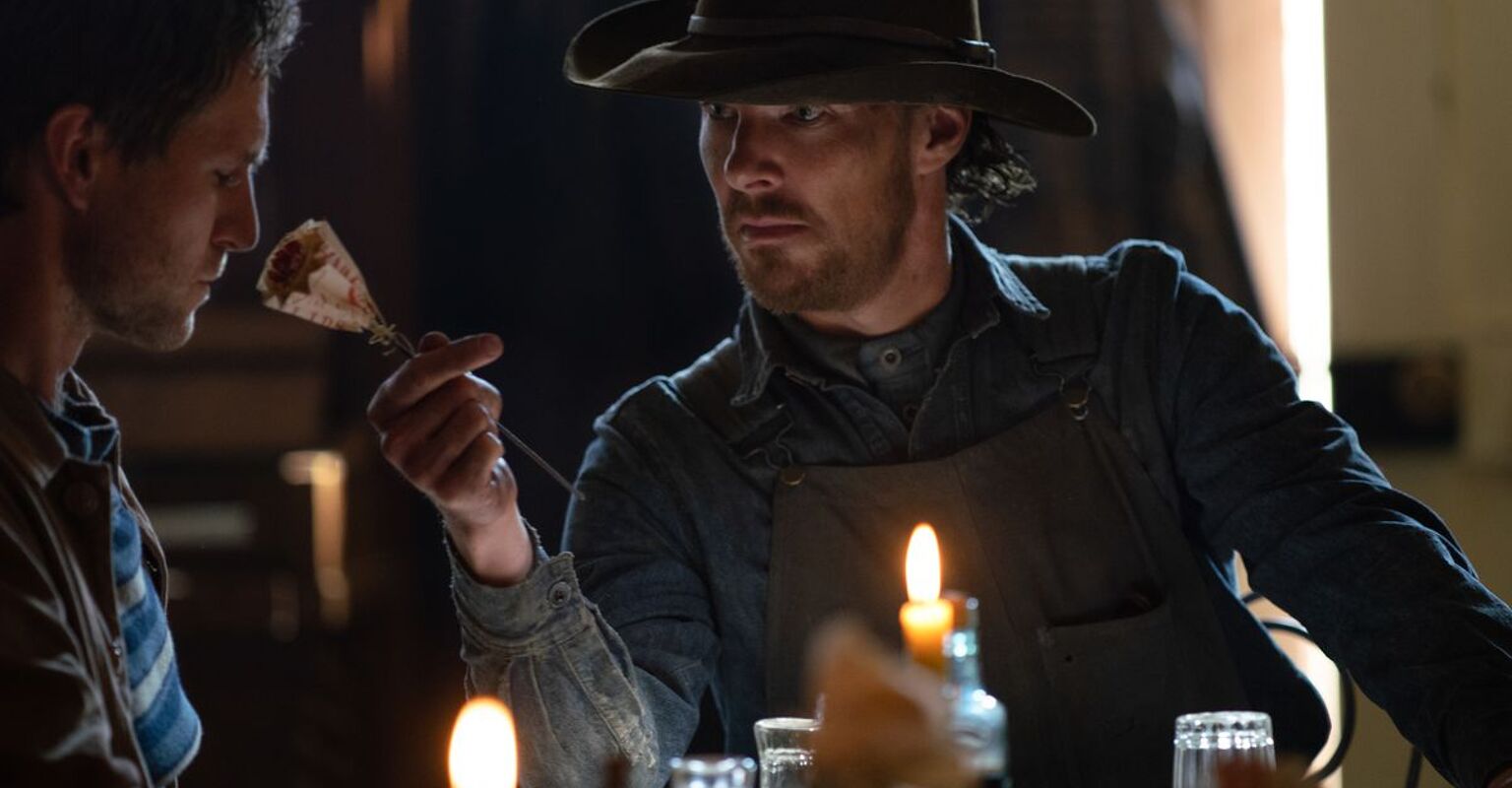 The contemporary cowboy has been getting queerer and queerer since the arrival of ‘Old Town Road’ in 2019. Lil Nas X brought the mythology and imagery of the cowboy into the modern era by way of exploitation tropes. As the cowboy has gotten increasingly queer and complicated, the ways in which the history of the stock figure – from the masculinity of John Wayne, to the deconstruction of Unforgiven – is being constantly challenged and reconsidered. Jane Campion’s latest film, The Power of the Dog, feels like a natural continuation of the messy, queer ways in which the cowboy is being reinterpreted. Phil Burbank (Benedict Cumberbatch) is a fascinating bundle of contradictions; in many ways he’s a traditional cowboy – terse, unfeeling, unforgiving, more willing to pay heed to nature than to the men around him – driven by the memory of the man who taught him everything he knows, the kind of cowboy who’ll ride ‘till he can’t no more. Phil’s story is framed as being that of a man trying to find a place for himself amidst stark binaries; between the frontier and the city, between loving nature and submitting to it, between self-acceptance, and the impact of internalized self-hatred.

Phil Burbank reads like the classic kind of cowboy – with the film set in 1925, it implicitly asks how long this kind of man can stay alive – and this extends to the relationship with his brother George (the always wonderful Jesse Plemons), and the Rose (Kirsten Dunst), the wife that George brings home. Phil draws his power not only from the land, but from being a certain kind of man; what he – and the world – sees as the right kind of man. The queerness of Powder of the Dog is fascinating because its so messy, so full of the potential not only for salvation, but for violence; and so much of how this is understood is through a masculinity that’s become as immovable as the landscape that forged it. Not only is Phil’s identity and queerness informed by his masculinity – the kind of masculinity that is more than willing to degrade his brother for not being straight enough, that will traffic in misogyny – but so is his queer desire. The bodies that Phil looks like are, more than anything else, like his own. Phil has a private enclave where he goes to swim, and hidden somewhere by the edge of the water is a small wooden chest full of magazines, each one an issue of Physical Culture. This, put bluntly, is Phil Burbank’s whack stack, and he finds pleasure in a body that he both aspires to, and desires through someone else.

Phil’s story is framed as being that of a man trying to find a place for himself amidst stark binaries; between the frontier and the city, between loving nature and submitting to it, between self-acceptance, and the impact of internalized self-hatred.

It’s no surprise that the men who work on the ranch call Peter Gordon (Kodi Smith-McPhee; Rose’s son from a prior relationship, brought into the Burbank clan through her marriage to George) a “faggot.” Overhearing this is what causes Phil to take Peter under his wing in a way; there’s something about it that feels threatening and predatory, in a way that might echo Phil’s own childhood, but one that also grapples towards a kind of understanding, even when Phil is the last man who would have the language to express it. Instead, the language that Phil uses is the kind that so often privileges masculinity, even among queer men; he says things to Peter like “don’t let your mother make a sissy out of you,” and calls him a “little bitch,” after Peter stumbles across the alcove, and the magazines hidden there.

Queerness isn’t a shield to the dangers of toxic masculinity; if anything, in Power of the Dog, it acts as an amplifier.

There’s an air of violence that develops around Phil and Peter’s relationship, like something out of Tennessee Williams. Both men are queer, but they’re wildly different types of men. Peter is more feminine, more delicate – even as he develops a violent streak of his own – where Phil is as brutal and unforgiving as the frontier itself. Queerness isn’t a shield to the dangers of toxic masculinity; if anything, in Power of the Dog, it acts as an amplifier. In order to mask his own queerness – something that Phil and his friend read as being part of Peter’s personality from the first time they see him, and the paper flowers he makes for the table that they sit at – he needs to double down on this kind of violent, unflinching masculinity. Phil has, in a way, become his mask; informed not only by the period of his life, the necessity to be seen as an acceptable kind of man causes him to respond with some combination of fear and violence whenever the feminine enters his life in a meaningful way. It’s no wonder he’s so cruel to Rose, who represents in so many ways everything that Phil is not: her femininity, her openness with emotion; even in how she dresses – there’s one sequence where she dresses like an archetypal flapper – has her representing the new world that these characters are in, the kind of world that could easily leave men like Phil behind. The city that exists beyond the borders of the frontier that defines so much of Power of the Dog only appears near the end of the film, and it’s such a strong contrast to everything that’s came before it, an offer of what really might be a brave new world.

Power of the Dog, like so many contemporary returns to the time and place of the cowboy, seems to be asking just how much longer this kind of man has left, and if – no matter how fast his horse, or how able he is to keep himself alive – he can outrun the passage of time itself. Phil is, by design, an image of an old type of man, but seeing the things that he idolises and despises, it’s easy to see how his DNA continues to persist in modern ideas of what’s “acceptable” for queer people in both digital and physical spaces. The world has changed, but in many ways, Phil Burbank has managed to outrun it; if he hadn’t, we wouldn’t still be talking about men like him.