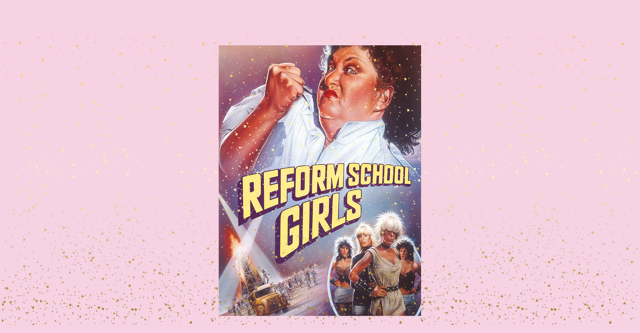 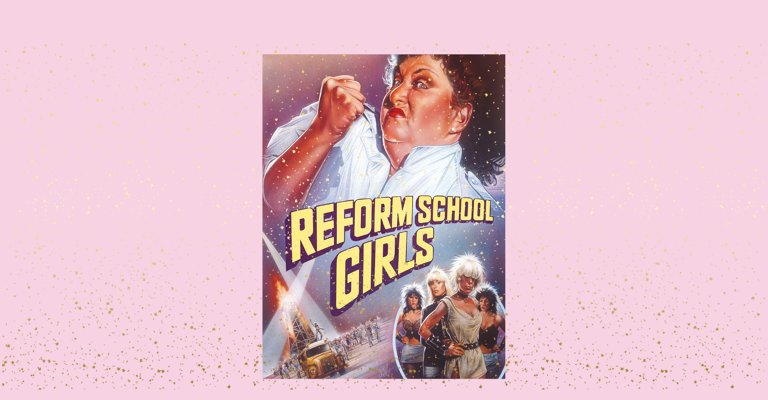 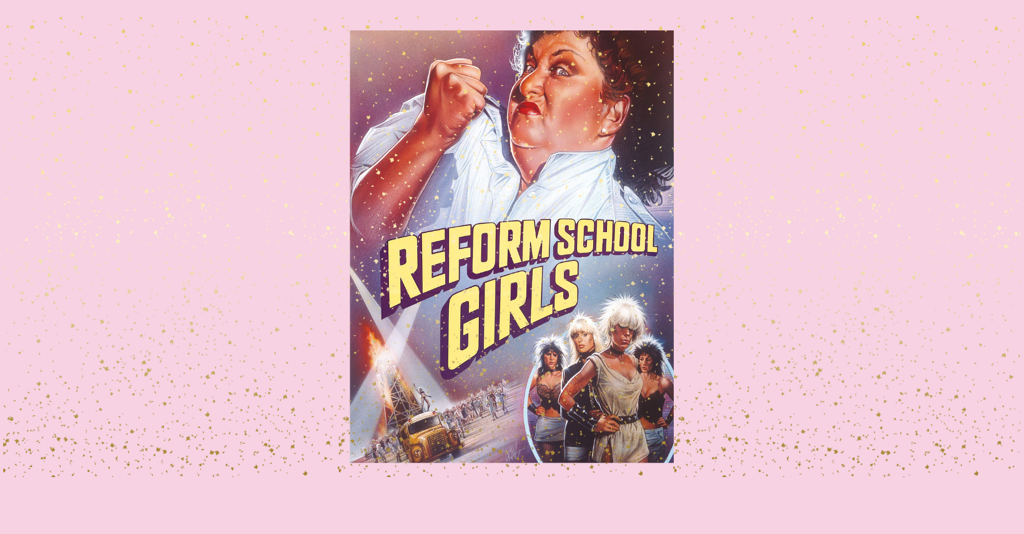 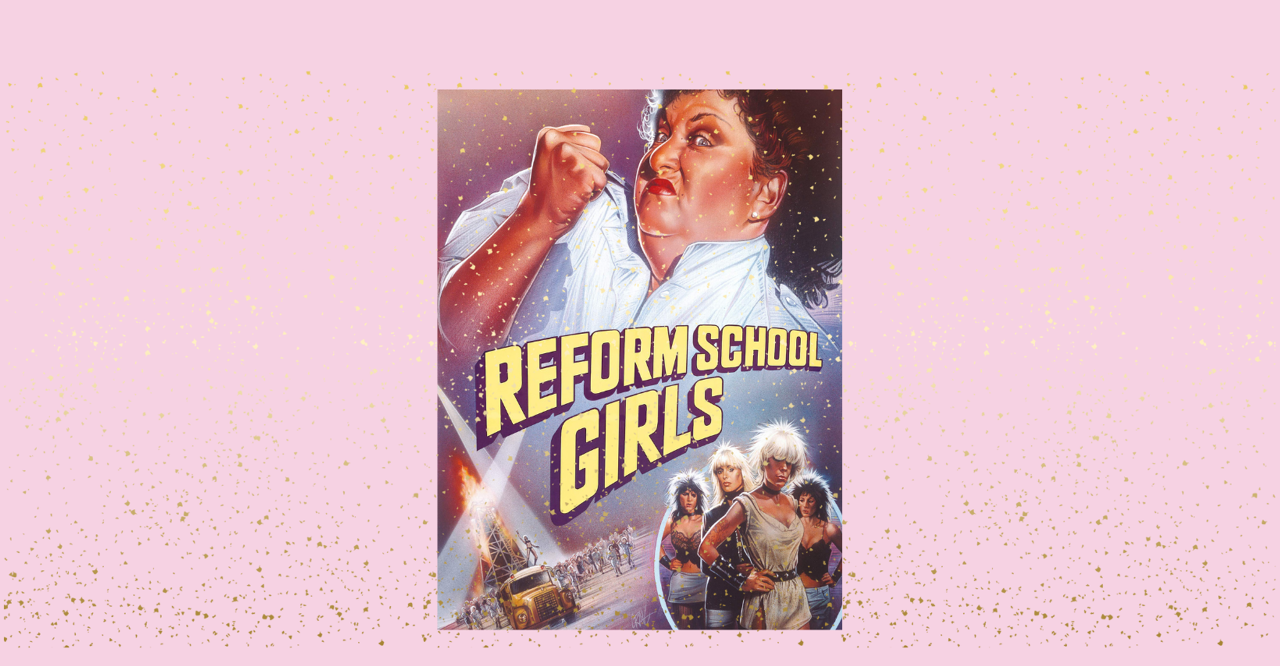 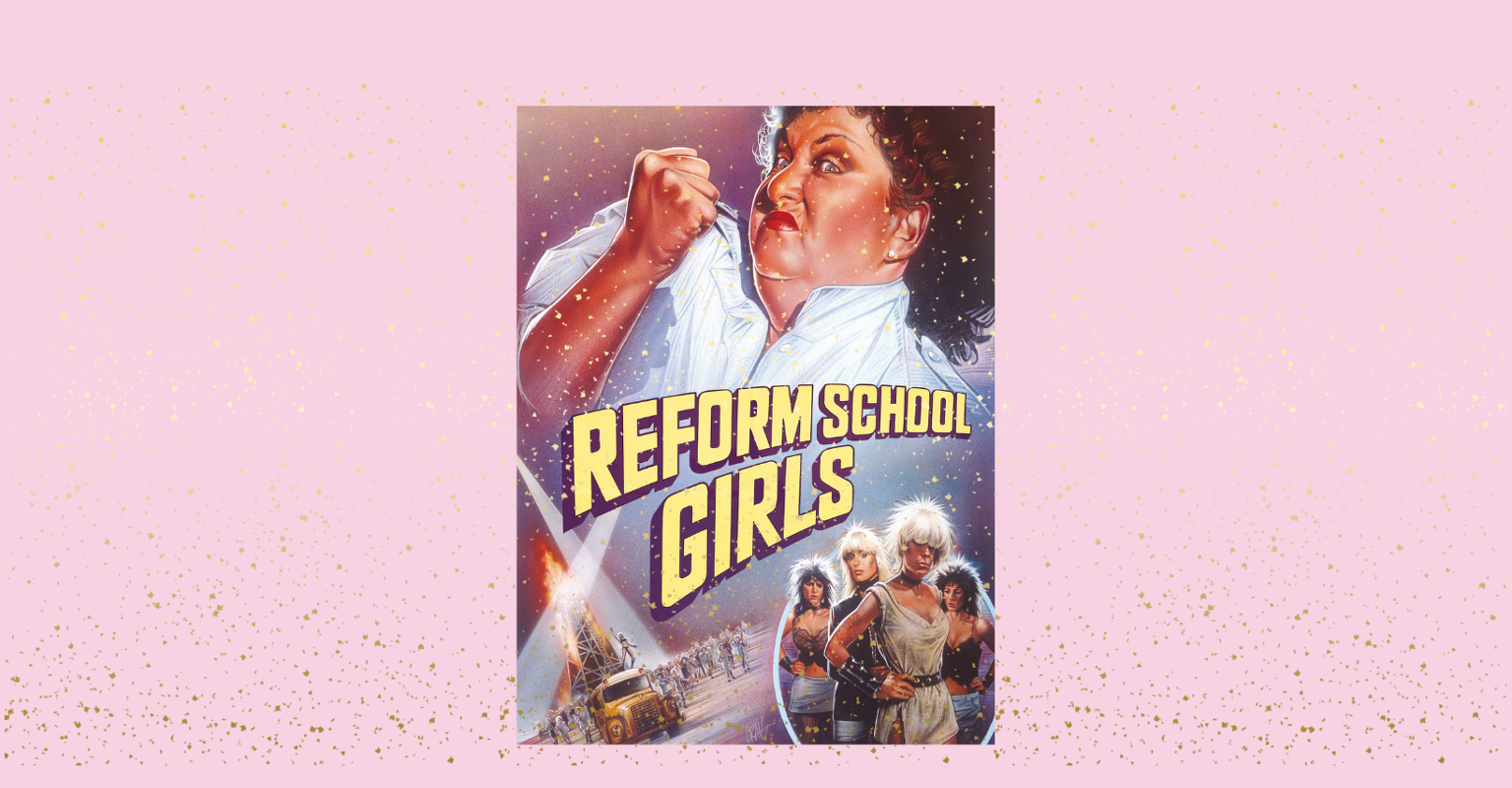 Late-night basic cable introduced me to many of my favorite B-movies. Once upon a time, the USA Up All Night lineup was the weekend event I most looked forward to. At 9 years old and as the youngest of five, my parents had largely given up trying to stop us from watching R-rated flicks, especially the watered-down TV versions that were constantly appearing after 10pm. Hosted by Rhonda Shear and Gilbert Gottfried, USA Up All Night showed cheap movies on rotation, a celebrated tradition in American TV (think Elvira, but cheaper.) These movies—stupid, silly, violent, sexy—were salvation for a precocious kid eager to experience anything strange. One of those cinematic gems—Reform School Girls—had a rebellion fantasy, scantily clad punk rock chicks, and iconic one-liners that not only grabbed my queer little attention, it cemented it as one of my favorite movies of all time.

What made Reform School Girls and all the other movies in its category so special? Not the production value, I can assure you. But where I grew up, being gay was not (and still isn’t) normal in any way. Long before the shockingly stupid Don’t Say Gay bill was implemented in my depressingly backwards homestate, we had good old-fashioned homegrown homophobia. You didn’t have to be overly observant to know that the community didn’t care for us, and God certainly didn’t either. The South is unforgiving in its judgment.

In places like that, kids like me have to find their own religion. Mine happened to come in the form of movies. The stranger the movie, the more I liked it. Midnight movies, B-movies, drive-in flicks – they all come with their own doctrine of strangeness. There’s more than one reason they call them cult films.

These movies—stupid, silly, violent, sexy—were salvation for a precocious kid eager to experience anything strange.

But he thing that makes these movies so appealing is that they are openly flawed, but with heart. They feel right, standing out as obvious and unusual in a tin of cookie cutter cinema. There’s something inherently relatable in them, especially to people who society has deemed “other.” Sometimes when you’re young and queer, things that don’t make sense to everyone are always crystal clear to you.

Reform School Girls is, inarguably, a standout from the B-movie wave of the 1980s. A little known gem that forces its way into your mind with outlandish camp and unapologetic queerness that whomever watches it can’t help but fall in love. If there’s such a thing as punk-camp, this movie embodies it.

Starring the late, iconic punk god Wendy O. Williams of The Plasmatics and the incomparable Pat Ast, a Halston clique staple and minor player in the Andy Warhol crew, this movie is a precious anomaly, a gift we never knew we needed so badly until we received it.

If there’s such a thing as punk-camp, this movie embodies it.

When you’re looking for an exploitation movie you can fall in love with, Reform School Girls has it all.

An essentially all-female cast has always appealed to gay men and women for obvious reasons. We are undermined in society for our perceived lack of power. Queer women love the strength behind these characters, and yeah, maybe the eye candy, too. Gay men find themselves not so deeply coded here, leading to a perfect storm of relatability and camp.

Any queer into punk rock knows W.O.W. The iconic frontwoman who literally bled onstage for her fans night after night. She conquered the underworld of rock, middle finger to the male-dominated scene. In Reform School Girls, she’s a tough young Detroit criminal with a hardened face (in reality a 37-year-old passing as a 17-year-old.) She’s one of a few fight-hungry antagonists and leads a girl gang of hot lesbians as they dominate the dorm. She’s got an in with the head of ward, and makes no apologies about her position in the chain of things. Her costumes—or lack thereof—are eye-popping alone, but her gravelly voice and zesty one-liners really bring this character to iconic status.

Sometimes when you’re young and queer, things that don’t make sense to everyone are always crystal clear to you.

Basically an avatar for Divine, this unmistakable star of the show offers something not seen in a movie before or since: an all-out camp performance that relishes in cruelty and biting wit. When the girls first enter her office, the innocent protagonist, Jenny, and the others are greeted with the line: “I thought I smelled fish.” A staple in the Fire Island gay party scene in the 70s, this Brooklyn broad with fire-wire red hair is the psychotic center of an already psychotic film. An unexpected model and friend to designer Halston and an Andy Warhol actress, this movie would not be as nearly memorable as it is without her. With the line, “Name’s Edna, but some of the girls call me Edie. I like that,” you know you’re in for a gay ass ride.

Supposedly added to the cast at the insistence of the producers for her tendency to bare her ample chest, T&A B-movie actress royalty Danning is instead covered neck to toe in S.S.-style leather gear, defying her presence’s promise of nipples. As the evil warden, she delivers lines like: “Put on your f*ck you boots and start stomping!” adding to the already over-the-topness of the movie. She makes for a wicked bitch hellbent on silencing all critics of her cruel methods.

When Jenny, our main protagonist, is getting the lay of the dorm, she says to Paula, another girl: “Seems like Charlie and Edna have an understanding.” Paula quickly replies, “Yeah. Charlie’s under and Edna’s standing.”

It’s fast, queer quips like this that make this movie stand out so bright among the slew of B-movie trash. It takes the porny reform school girls/women in prison tropes of my movies’ past and blows them out to insanely camp proportions.

When the Warden says to Charlie, “Your time is doubled!” Charlie snaps back, “so’s your chin!”

That’s just a few of the dozens of zingers and hilariously biting comebacks you might instead find sitting comfortably in gay productions like Boys in the Band. It probably helps that the creator and director, Tom DeSimone, is himself a gay man.

Gay. Gay, gay, gay! This movie is wall-to-wall gay. From the one-liners to the trash fashion to the lesbians that run the dorms, there is nothng heteronormative about this movie. As a matter of fact, the main character, Jenny, is the only one that expresses interest in men, and that’s only so she can flirt her toward making an escape. The women here don’t need men. They survive with each other. It’s not even coded like the old movies, it’s just good old-fashioned women in prison getting it on.

The tattered fashion of the reform school is, in a word, simply outrageous. It’s a fantasy for viewers both gay and straight, a bizarre spectacle that nowhere would allow to happen in real life, let alone a correction facility. Every scene in the doors gives viewers an eyeful of g-strings, crop tops, and cheetah-patterned matching lingerie sets.

There’s nothing more satisfying than the underprivileged and oppressed rising to take back their power. When they’ve all had enough of the unimaginable cruelty Edna doles out, the girls rise and it’s a wild, violent ride to the end from here.

Reform School Girls isn’t for everyone. Some queer people don’t get the cult of bad cinema (bad music, on the other hand, different story), but that’s ok. Maybe they grew up in a different time, or a different place, where Julia Roberts was their queen. We all have our thing, and that’s good. When you’re queer, you’re family.

In a strange turn of fate, when I met my childhood best friend Keith, we near-instantly bonded over our love of these B-movies. I discovered that I wasn’t the only one who loved them, who quoted them obsessively and watched endlessly into the night. I was not alone.

Smoking pot in his car under the cover of dark, two gay boys bonded over Reform School Girls and Night of the Comet, the one liners rolling off our cotton-mouthed tongues between hysterical fits of laughter. I knew I had found my tribe.

Reform School Girls was recently released on American Blu-Ray from Vinegar Syndrome. Get your limited copy now and support indie cinema and those that keep it alive – you won’t be sorry.♦