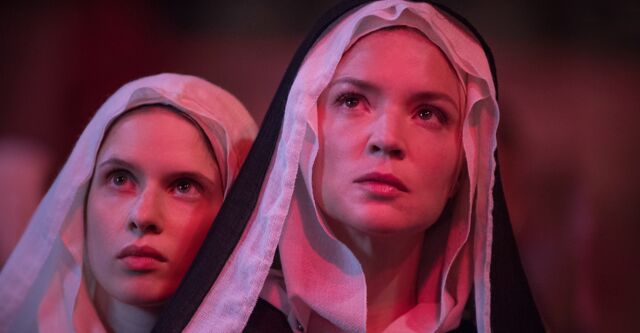 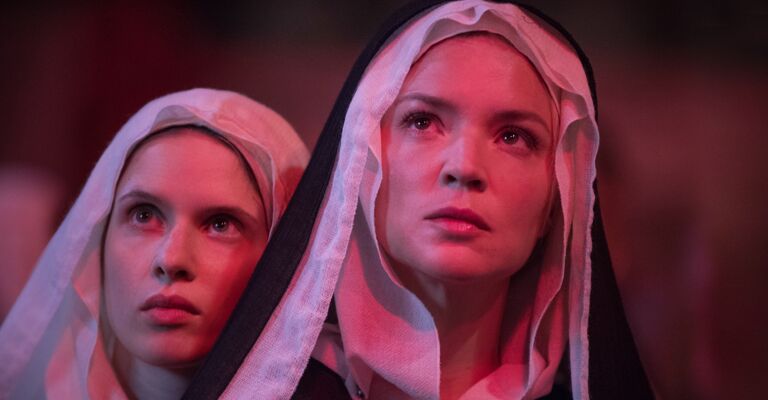 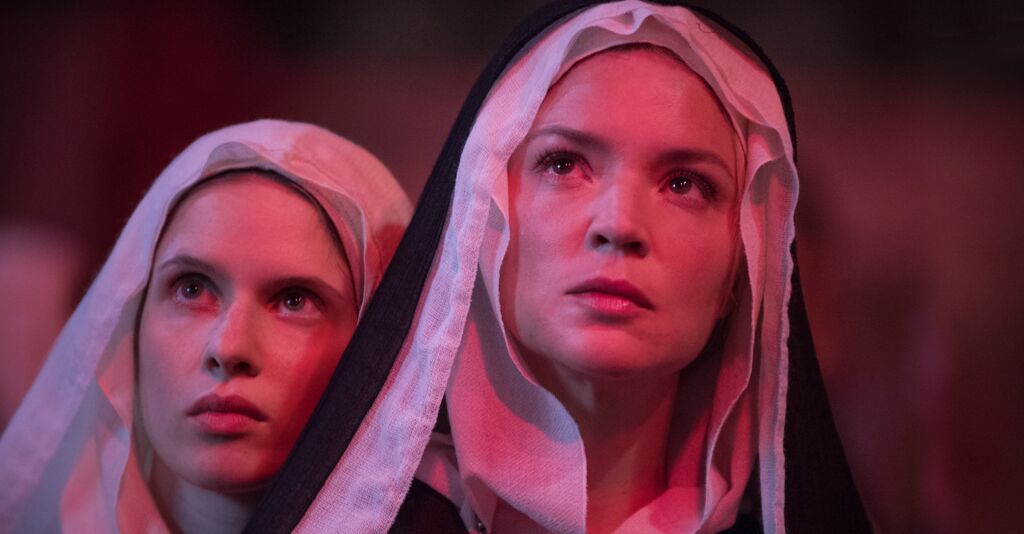 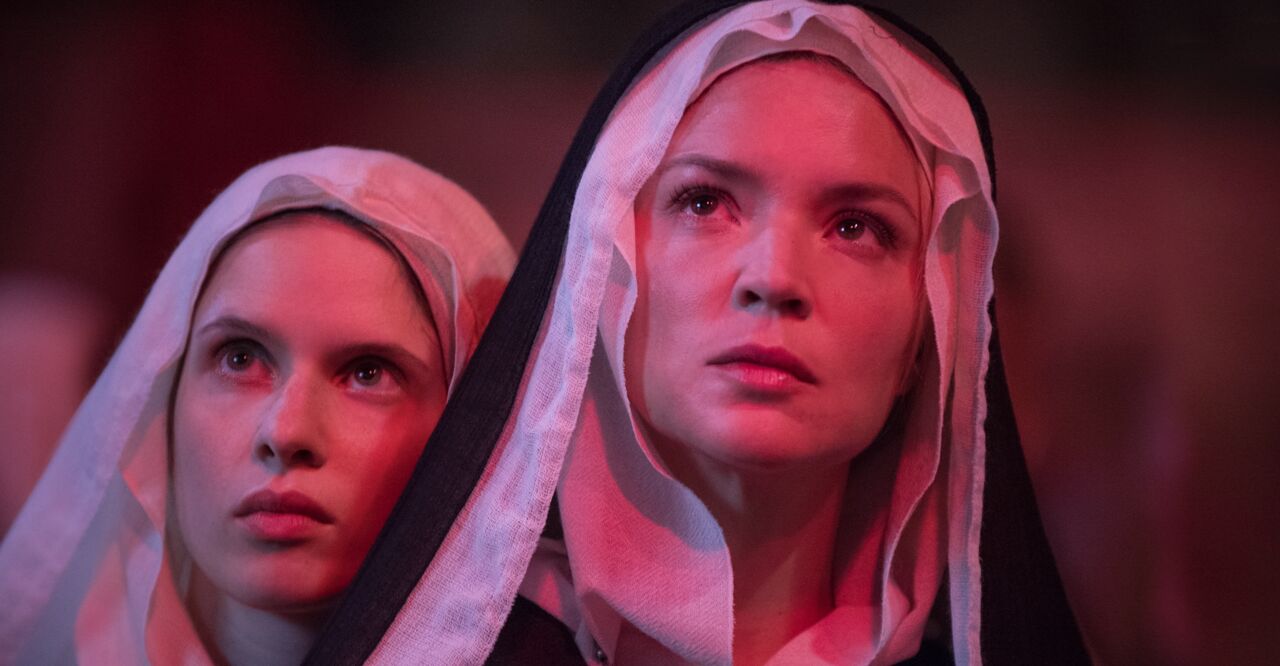 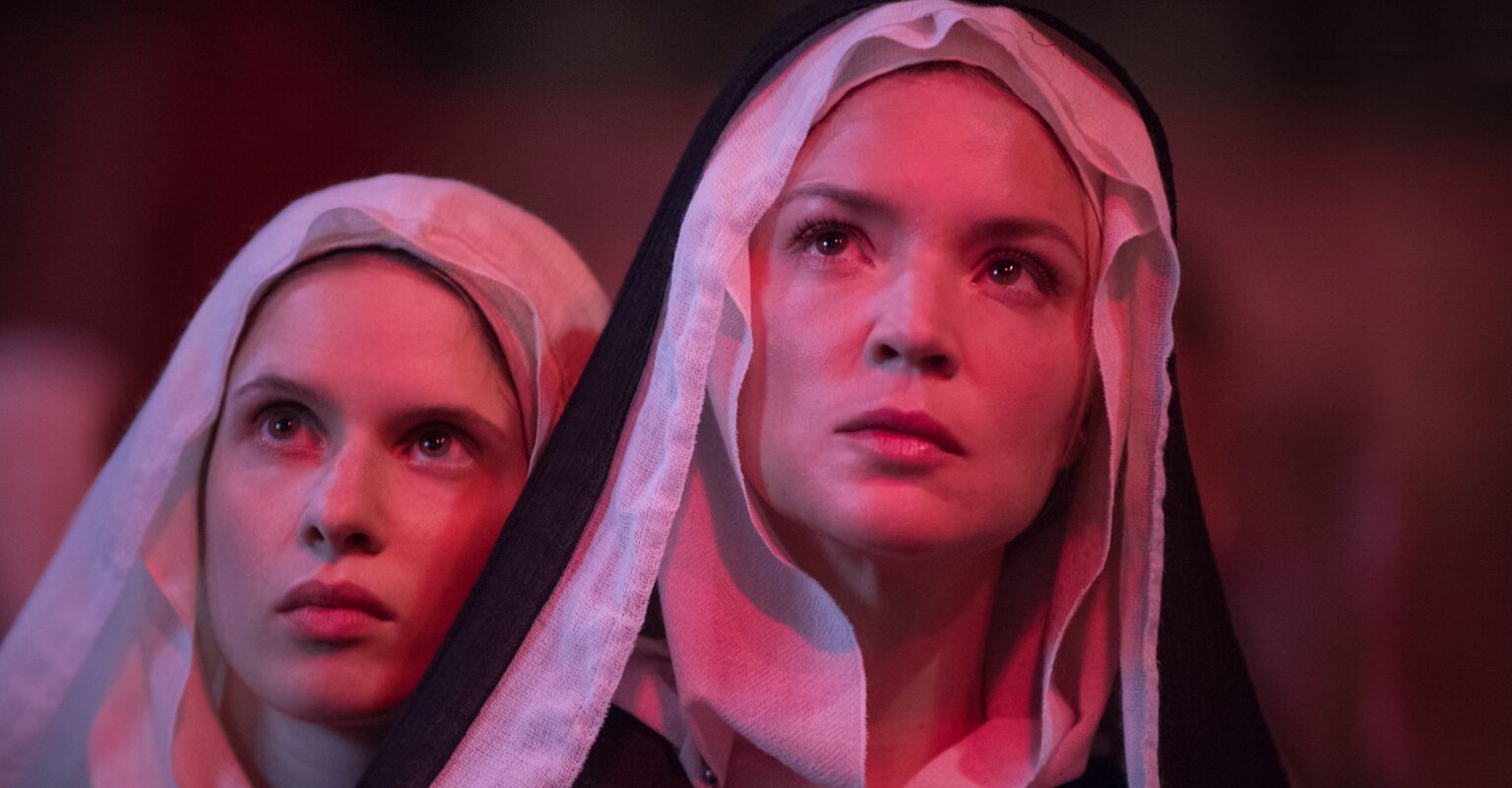 Benedetta (2021) tells the story of a historical figure from 17th-century Italy, Benedetta Carlini, who was a Christian mystic and a lesbian. Directed by decorated filmmaker Paul Verhoeven, the film has run the international festival circuit and garnered mostly effusive reviews. For many queer Christians, however, the film touches a deep wound as it vacillates between the perspective of a violent cisheterosexist church and our own understandings of the mystical holiness of queerness.

The true story nearly defies belief: Benedetta claims to have visions of Jesus, rife with cryptic metaphor and poetic imagery, and she bears physical markings of these events in the form of stigmata —the wounds of Christ: oozing blood from the crucified hands and feet, the fresh lacerations of the crown of thorns, and the throbbing gash of the stab-wound in his side. Benedetta was not the first mystic to have experienced the miraculous apparition of stigmata; St. Francis of Assisi was famous for this symbolic unification with Christ, and many other instances have been recorded.  The oblique eroticism of these suggestively penetrative markings have long held a quasi-sexual resonance in churchly refections on them. Stigmata are the result of a holy penetration of a submissive believer’s body, an act fundamentally rapturous and orgasmic, while also usually painful and sometimes terrifying.

The oblique eroticism of the Stigmata’s suggestively penetrative markings have long held a quasi-sexual resonance in churchly refections on them.

The entanglements of power, flesh, desire, and gender bear a markedly queer logic, as mystics of all genders encounter a gender-expansive Spirit in BDSM play. Stigmata also hold symbolic resonances with trans bodies that bear the marks of (trans-)formation, the marks of needles or knives, holy signs of one who is in communion with Christ, who is on a spiritual journey that is both harrowing and beautiful in a way no one else can fully understand. But above all, stigmata mark an inward reality, and one need not have scars to prove one’s gender nor one’s sanctity. In Benedetta, Carlini is an enigma. As credulous as some people might have been in a mostly pre-scientific world, miracles did not happen often, and ecclesial administration was not quick to confirm loose talk of divine activity that might trouble the hierarchies between commoner and cleric. The authorities evaluate Benedetta’s claims, and, to capitalize on her popularity with the common people of the land, they confirm the miracles and elevate her to the position of abbess, displacing the former head of the convent.

As all this is happening, Benedetta is drawing closer and closer to Bartolomea, another novice in the convent who is vulgar in her innocence; she had a rural upbringing as the daughter of a sexually abusive farmer, so she doesn’t know any better, and she expresses her sensuality to Benedetta in ways both provocative and liberating. They share moments of tenderness, transgressive touch, and finally, sex. The Virgin Mary was Benedetta’s primary affection since her youth, and Bartolomea uses a Marian figurine to fuck her.

They are discovered, and charges are brought against them to the ecclesial administration. Bartolomea’s interrogation is a torturous sexual assault with medieval instruments. She finally gives up her lover.

The Virgin Mary was Benedetta’s primary affection since her youth, and Bartolomea uses a Marian figurine to fuck her.

The authorities are then caught between Benedetta’s mystical status as someone set apart and chosen by God, and their knowledge of her so-called crimes. They again question the veracity of her claims, developing nefarious explanations for her experiences: they are the works of the devil in disguise, or entirely fabricated through self-mutilation and lies.

This is familiar to many queer Christians. We were raised in churches that could not see the work of God in and through queer people. The way our bodies and our desires could not conform meant that there was no place for us but a burning stake, and for some that was no mere metaphor. The church could view the holiness of queer love, the miracle of transness, and reject the work of God as that of the devil in disguise. They held tribunals. They examined our bodies. They consulted the legal writ. They pronounced judgment.

The way our queer bodies and our desires could not conform meant that there was no place for us but a burning stake, and for some, that was no mere metaphor.

Benedetta is not a film by queer people for the uplift and healing of other queer people. Paul Verhoeven is interested in the sexual elements of Carlini’s story only insofar as they constitute historical facts. “I haven’t made it a point. It’s a big percentage of the population. Homosexuality is part of life, so it should be a part of our dramas,” he said in Variety last year. “Why should I ignore that? It’s there. A certain part of the population is bisexual or gay or transgender, that’s the reality. I come back to it because it’s a normal part of life.”

But the queerness in Benedetta is not held with care. It is subjected to violence with all the tenderness of a historical accident that just so happened to propel the narrative forward. Watching the process of literal torture, interrogation, and condemnation is sure to pry at wounds fresh and old for queer viewers.

There is something to be said about Verhoeven’s guileless approach, however. He tells Benedetta’s story without hagiography. Was she lying about the miracles? We don’t know. Regardless, her ego seemed to express itself in ways that suggested power-hunger, conceit, and selfishness. But queer people don’t owe anyone saintliness. In fact, it is Benedetta’s apprehension of the love and grace of God manifesting in her complicated queer body that demonstrate the reality of the tension experienced between our selfish tendencies and God’s grace. For those who have found God outside of homophobic churches, inside our own queer and trans bodies, we know that miracles do happen, in spite of our failings, because God’s love is not reserved for the perfect queer, but for everyone.

Our bodies are central to our connection to God. And the church that historically rejects this claim cannot understand the fullness of God’s love without it. The clerics in Benedetta fail to understand how her body and its desires are fully loved by God in all its difference. This mistake ensures their own deaths, the Great Plague taking their bodies in a possession inverse to Benedetta’s. She is vindicated, and they are killed. ♦

Quinn Foley (they/them) is a student of religion and culture, a pastor/organizer, and an indecent saint in the making.