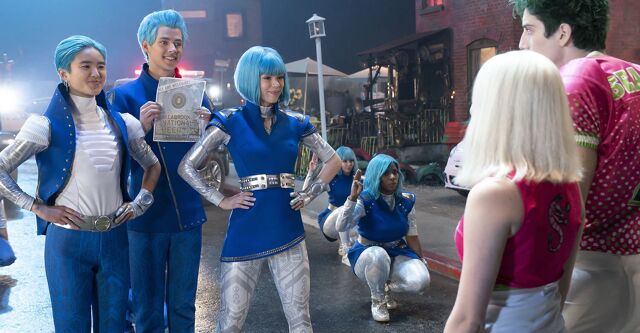 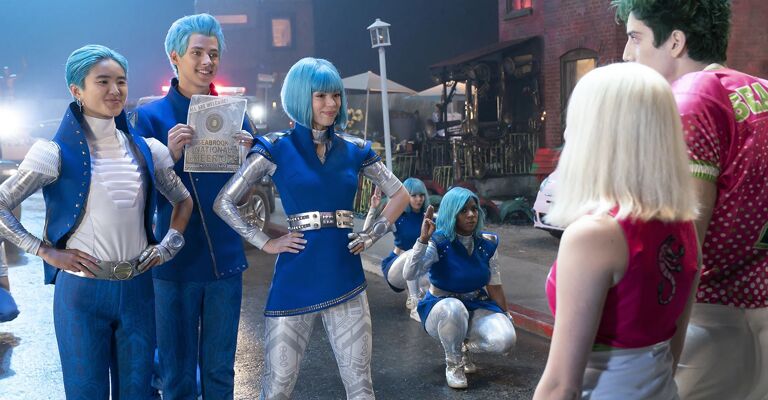 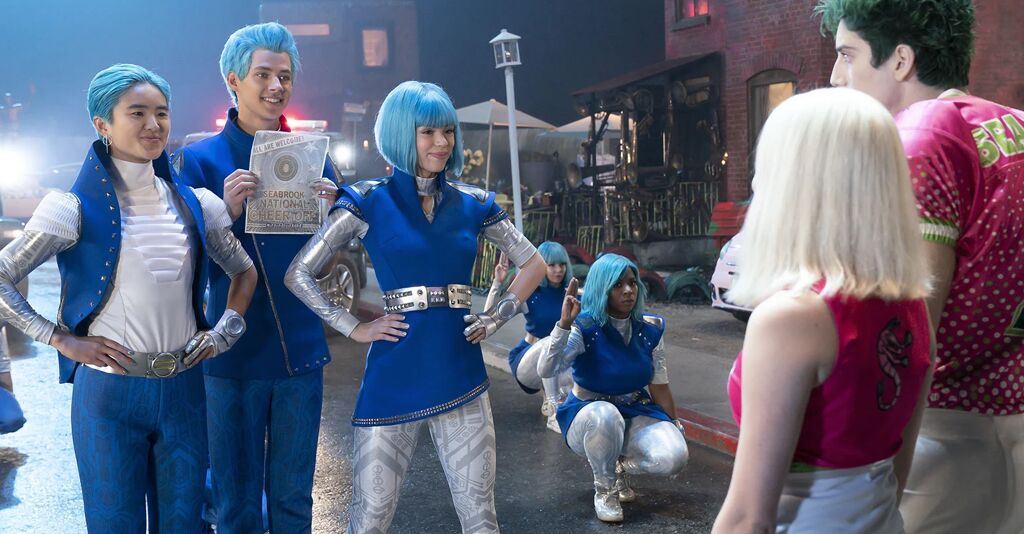 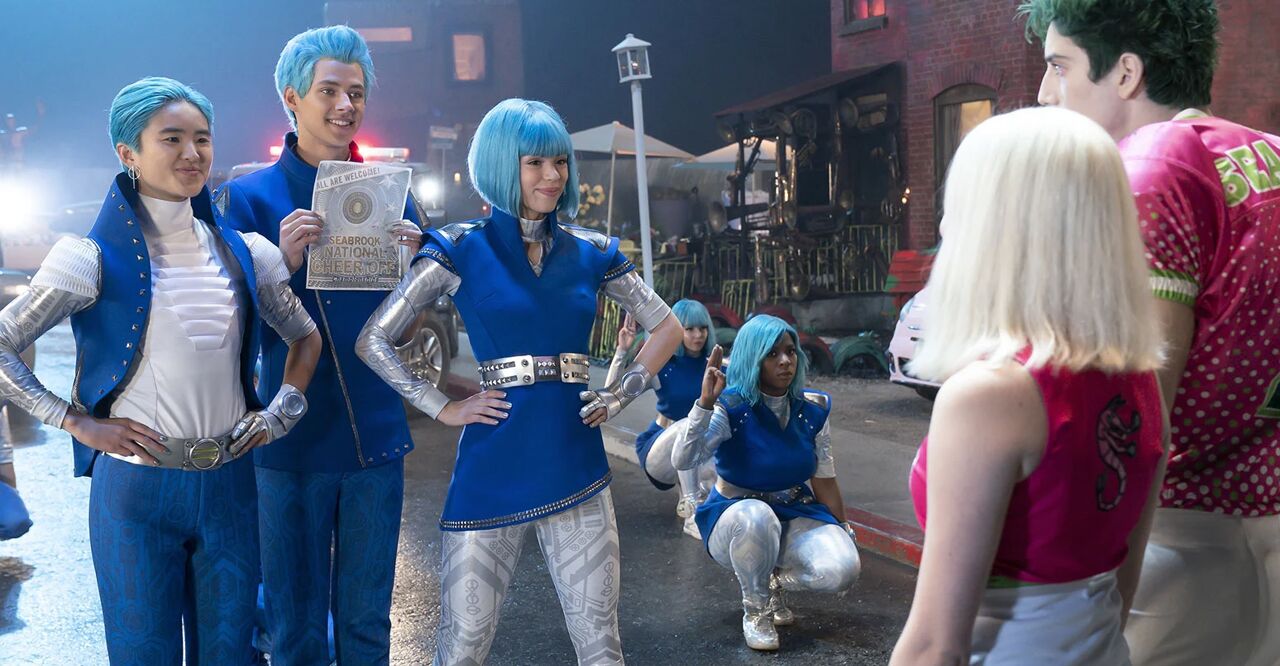 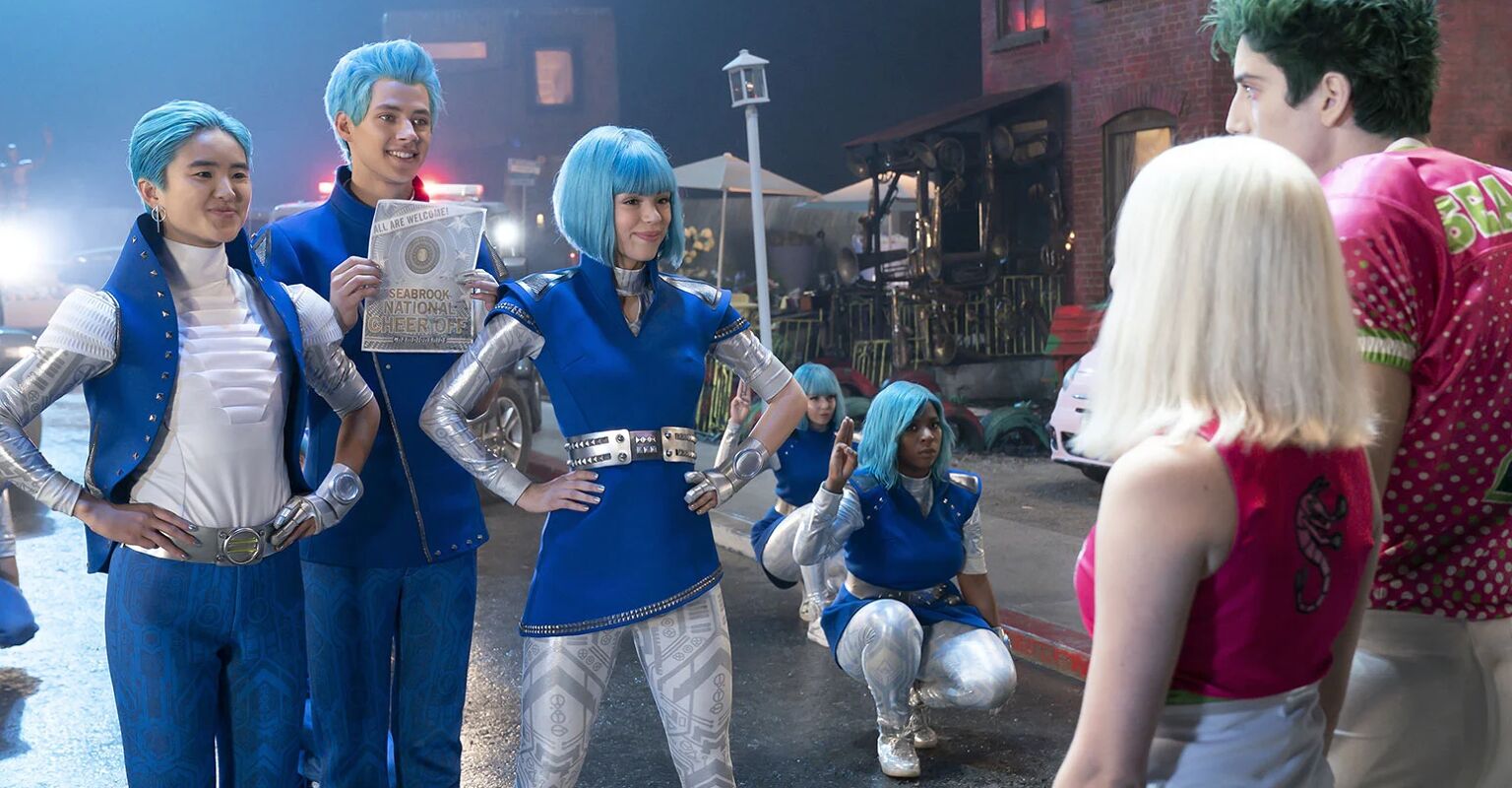 Zombies 3, the first live-action Disney movie to feature an explicitly nonbinary character, came out on earlier this summer. Disney Channel Original movies are already campy as hell, but when I saw a so-called perfect town filled with pastel pink and baby blue-wearing suburbanites thrown into panic by teenage zombies, the trans allegory alarms in my head started going off. I watched all three of the Zombies movies, and am here to declare that they—like many Disney Channel Original movies before them–are part of the queer canon.

The Zombies films take place in Seabrook, a fictional town obsessed with conformity. Zed, a charismatic zombie, and Addison, an idealistic cheerleader, are the main protagonists. Each movie introduces a new type of monster—first zombies, then werewolves, then aliens—to Seabrook, and explores its impact on human-monster relations.

At their core, the Zombies films examine what it means to be Other. The film holds parallels to the historic and ongoing struggles of the indigenous, Jewish, and Black communities, and it would take a book to fully unpack their connections to queer experiences, let alone all the themes and ideas these movies present. But Zed and Addison’s stories are a good window into the depth the Zombies movies manage to reach.

At their core, the Zombies films examine what it means to be Other.

Neither Zed nor Addison fit the mold of a typical Seabrook citizen. Although Addison doesn’t look different from her peers, she wears a wig to hide her unnaturally white hair. Initially, she is an outspoken critic of the anti-zombie rules that exist to keep the zombies marginalized. But her fellow overwhelming anti-zombie cheerleaders quickly silence her, suggesting Addison sympathizes with zombies because she too is unnatural. Zed, however, can’t change that he’s a zombie. Only after drastically modifying his Z-band—a wristband that suppresses his zombie impulses—does he learn that he can “pass” as human. Though Addison is delighted to go on a public date with him—instead of meeting in a panic room as usual—she laments the lengths they go through just to eat ice cream together. “We’re changing ourselves,” she says, “but what needs to change is everybody else.”

Each queer person perceives themselves a certain way, and most of us must reckon with how the world, in turn, perceives us. Zed knows being a zombie doesn’t take away from his humanity, and is comfortable changing himself to fit Seabrook’s idea of what it means to be human. For Addison, however, passing means living in constant fear. She eventually snatches off her own wig to show solidarity with zombies, and while she no longer has to hide, no one else at Seabrook looks like her. It takes her much longer than Zed to find a place where she belongs.

Each queer person perceives themselves a certain way, and most of us must reckon with how the world, in turn, perceives us.

The werewolves’ arrival in Zombies 2 has dramatically different implications for Zed and Addison. Zombies are mostly integrated in Seabrook, and Zed worries werewolves threaten that hard-won acceptance (respectability politics much?) Unlike Zed, who strove to be approachable and non-threatening, the werewolves have no interest in changing to make humans more comfortable. They snarl and flash their fangs, howl in Seabrook High’s hallway, and take pride in being werewolves. Zed tries to distance himself from the werewolves as he runs for student body president. When Addison calls him out on his campaign posters, edited to make him look more human, he argues “people are lumping zombies and werewolves together” and that he has to prove he isn’t like them.

Zed’s discomfort with werewolves reminds me of transphobic cis gays or transmedicalists who claim certain queers—the loud ones, the stereotypical ones, the politically active ones, the gender-nonconforming ones, the binary-destroying ones—give the community a bad name and threaten its progress. They, like Zed, misunderstand. When werewolves show up in Seabrook, there are no anti-werewolf laws passed. Instead, anti-monster legislation is reinstated. Either all monsters–or all queers–move forward together, or we don’t move forward at all.

Addison, on the other hand, finds community with the werewolves. One tells her she may be the True Alpha, a legendary white-haired werewolf. Addison starts identifying as a werewolf, dressing like one and spending her time with them. She and Zed have a falling out when he tries to stop her from donning a moonstone and turning into a werewolf. Sadly, when Addison puts the necklace on, it fails to transform her. Zombies 2 ends with Addison back where she started: without a community.

Either all monsters–or all queers–move forward together, or we don’t move forward at all.

Addison finally finds her people in Zombies 3 when aliens arrive at Seabrook. The alien mothership (voiced by RuPaul, of course) accidentally beams her up, and she learns her grandmother was an alien scout sent to Earth to find Utopia. A-Spen, one of the aliens, presents Addison with a lens and asks her to move it using telekinesis. When she fails, A-Spen tells her, “Our relationship to stardust defines us…you are not truly one of us.” “No,” Addison protests, this is who I am, this is where I belong, it all makes sense!” Heartbroken, she flees from the ship. A-Spen’s attitude toward what it means to be alien reflects an irritatingly persistent belief in the trans community that dysphoria is an essential part of being trans. Though dysphoria is common, some trans people go their whole lives without experiencing it. Any attempt to define a universal trans experience other than the simple fact of being trans is doomed. Addison, however, eventually develops telekinesis and launches into song, belting, “I’m finally me!” I was teary-eyed when she sang, “I was feeling like a stranger in my own life…but now I’m finally me!”

I’ll be honest: I felt silly watching these movies. I was embarrassed that I still liked “Wizards of Waverly Place” when I was thirteen, and ten years later I’m no less self-conscious for enjoying these sparkly, upbeat movies made for ten-year-olds. But there’s an earnestness in Zombies 1-3 that makes it unique. Coupled with the trilogy’s unexpectedly rich exploration of what it means to be different, I had a genuinely good time. If you like musicals, monsters, or trans allegory, I recommend you give Zombies a try. Don’t worry; their jokes are worse than their bite. ♦