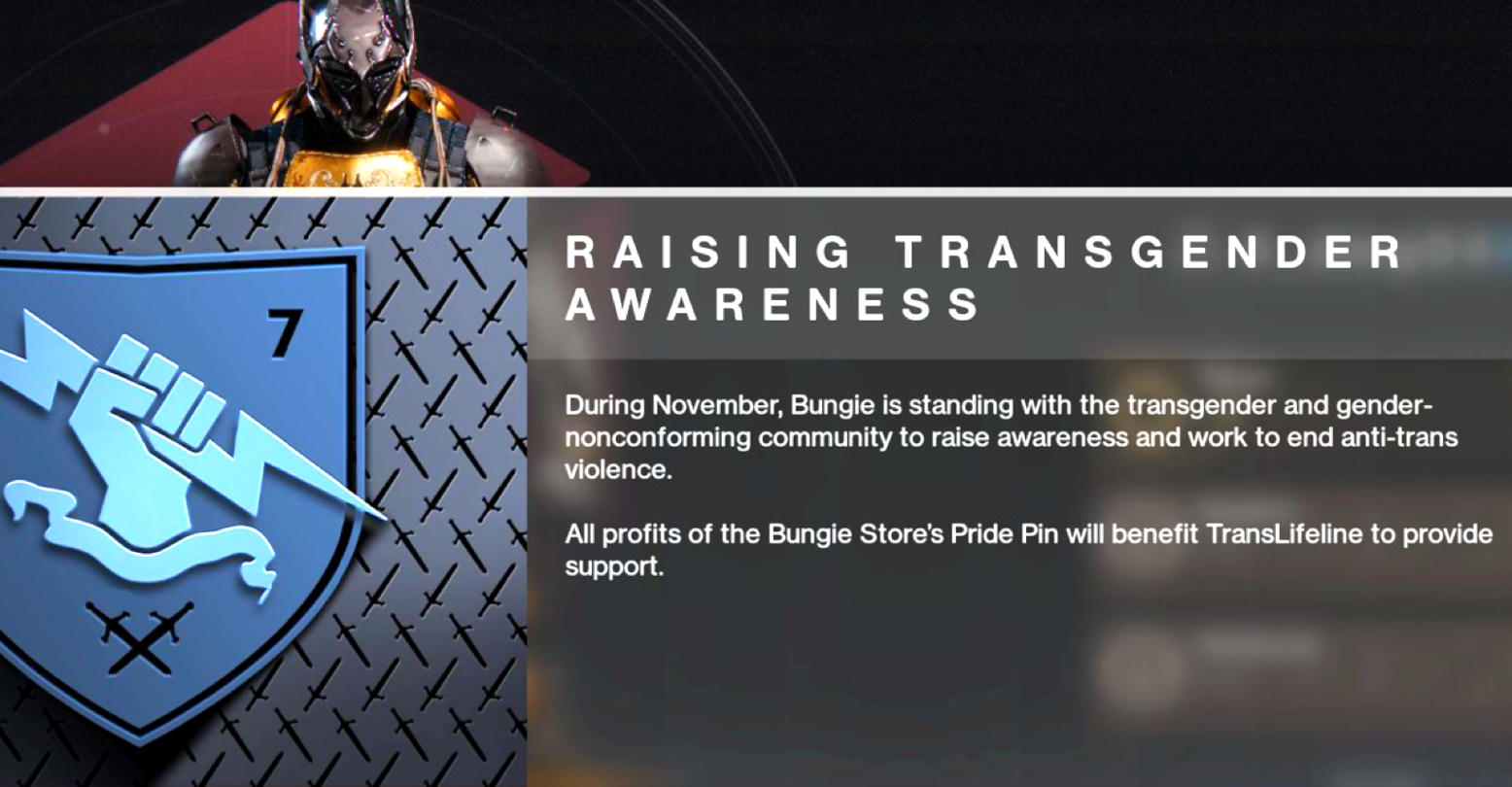 Players of the video game Destiny 2 were recently met with some great news: the game’s developers, Bungie, explained how they were “raising transgender awareness” for the upcoming month of November.

“During November, Bungie is standing with the transgender and gender-nonconforming community to raise awareness and work to end anti-trans violence,” Bungie’s message to players read. “All profits of the Bungie Store’s Pride pin will benefit Trans Lifeline to provide support.”

The collectible Pride pin – currently priced at $15.00 – is made 1.8 inches wide and with multilayer die-cast metal. Purchasing it can also net the Destiny 2 “True Colors” Emblem in-game for players to show their Pride while playing, sent by email 24 hours after purchase.

“Destiny is a game where everyone is welcome. All are included. All are brave. The strength of our community is that we all bring our unique experiences on our journeys into the wild frontier,” Bungie writes in a message on the product page for the pin. “During the month of November, Bungie is raising awareness and support of the transgender community by honoring the memory of trans and gender-nonconforming people whose lives were lost due to anti-trans hate and violence.”

Just last month, Bungie took a similar approach to recognizing the charity AbleGamers and show support for differently-abled players, according to TheGamer.

A Senior Community Manager for Destiny 2 shared the news on Twitter.

We mentioned an emblem when introducing Trans @ Bungie earlier this year. While we don't have news this week, stay tuned for a future TWAB.https://t.co/2wYMOOdZAo pic.twitter.com/37UCqJjEGH

In May, Bungie introduced the “Trans at Bungie” Inclusion Club, an “employee-led group… empowered to make more targeted efforts” for representing the trans community on the Transgender Day of Visibility.

“When I joined Bungie, I was ecstatic to find out there’s a club of employees who are familiar with the challenges, and who can help educate managers and coworkers so the burden wouldn’t be entirely my own,” Ash Adam, a trans and non-binary engineer at the company, said at the time.

Members of the Trans at Bungie club pledged an emblem back then, and they’ve followed through. “In the meantime, to all our trans Guardians out there, we see you, and we’ve got your back,” club lead David Setser said back then. They’ve shown that here, too.

The Trans Lifeline is not just any other trans-affirming organization either. It’s a grassroots hotline for providing emotional support and even microgrants to trans people in crisis – “for the trans community, by the trans community,” as their website states. They report that they’ve dispersed over a million dollars and taken over 100,000 calls.

Between this and the recent name change of a character in Overwatch, it’s really not a bad time to be a multiplayer first-person shooter gamer.

For real though, it means a lot to me, that @Bungie is willing to stand with the trans community, when so many seek to tear it down. It's times like these that make me proud of Destiny 2's community and the studio that makes it possible. Thanks Bungie https://t.co/AG9APBEyxB