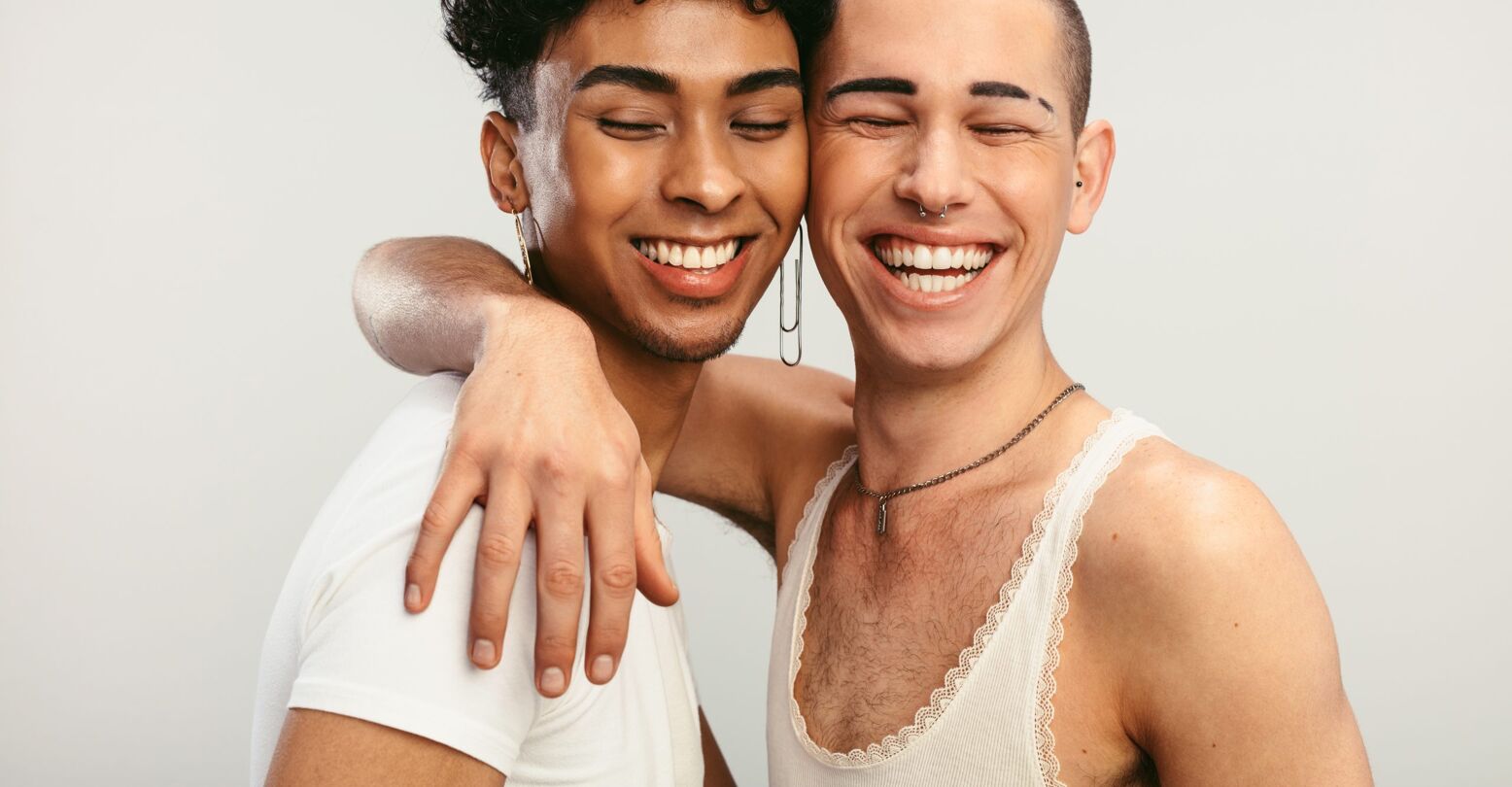 What’s the best way to talk to a partner about opening up your relationship… especially if you know they might be resistant to the idea?

Although the idea of open relationships remains taboo among a large number of the population, queer couples are likely to be more willing to experiment or explore non-traditional set-ups. A 2010 study by the San Francisco State University found that 50% of gay couples reported some degree of non-monogamy in their relationship.

A more recent, 2020 study by the San Francisco Gay Therapy Centre found 30% of gay men were not strictly monogamous with their partners.

Just recently, singer-songwriter Willow Smith, on Red Table Talk, said she could happily imagine herself in a relationship with a man and a woman at the same time.

Of course, just because lots of LGBTQ might explore the idea, that doesn’t necessarily mean it’s right for you. Or that it will be easy.

INTO spoke to two therapists for some advice.

1. First, understand the reasons why you want to open it up

“How will one partner feel if the other one jumps into a smorgasbord of sex while the other one has a tiny taste here and there?”

Thomas says it’s important to know your feelings before you even engage in that conversation.

Kathy Labriola is a nurse, counselor, and hypnotherapist in private practice in Berkeley, California.

“It is imperative that the partner who wants to open up the relationship do their homework, do a lot of reading about open relationships and polyamory, listen to some of the many polyamory-related podcasts, etc. It can also be very helpful to attend either online or in-person polyamory discussion groups to hear what other people are doing and how an open relationship is working (or not working) for them, and get their advice.”

A bisexual polyamorist herself, Labriola’s authored several books, including Love in Abundance, The Jealousy Workbook, and the soon-to-be-published, Poly Geezers: Aging in Open Relationships. She says people need to be “brutally honest” with themselves.

2. Try and stick to the subject in hand

Communicating effectively requires particular skills, and we all know different people have strengths and weaknesses in this area.

“For example, saying ‘I want to make this major change, and this is what’s happening for me.’ Or make it very specific about sex: ‘This is hard for me to say to you, but when we’re having sex, this is something that you do that makes me feel uncomfortable,’ or ‘This is something that I want,’ or ‘I’ve asked for this many times and you seem to be reluctant, I’m not sure what’s going on there.’

He advises people to say things “thoughtfully and gently”, although that may sometimes be hard.

“I think if one of the concerns is, ‘I’m just not really turned on by you, I’m not really enjoying our sex.’ Well, no matter how nicely that is put, it is going to be hard to take. It may feel really hurtful. But with that information, change may happen. We have to find ways to navigate situations that may not feel ideal. Each person may not get exactly what they want, but there may be ways to improve a situation that would otherwise only lead to frustration and disappointment.”

Be mindful that this could be a very big deal for your partner. Your other half may value the sense of exclusivity that monogamy can convey – and they may mourn losing it. Another way of softening the blow is to emphasize the things in the relationship that work particularly well.

“There could be many parts of the relationship that are truly satisfying,” agrees Thomas. “I think that the way to open up that conversation is actually to speak to what is working.”

3. Discuss potential boundaries and be prepared to take things slowly

If you find your partner is open to some degree of non-monogamy, what might that look like? Will you allow sex if one of you is out of town? Will there be a ‘once only’ rule when it comes to others, or are regular fuck buddies OK? Will you give yourselves free passes on certain nights?

“You also have to be clear how much you’re going to tell,” suggests Thomas. “There are couples who have open relationships and openly share. But then there are other couples where there is an open relationship but it’s ‘Don’t Tell.’”

Other couples explore boundaries by only agreeing to play together or have threesomes. However, Thomas warns this only succeeds if all parties are on board with the idea. If one partner doesn’t want to open up their relationship, “then bringing a third in is not a solution.”

Labriola says introducing changes very slowly may help people to adjust, allowing the more reluctant partner to “set a lot of boundaries to make this feel safer to them.”

She suggests flirting with other people might be one way to dip your toes in the water.

Flirting with other people might be one way to dip your toes in the water.

If these scenarios go well, then you can think about moving on to dating and/or having sex with others.

“Some people have an innately monogamous sexual and relationship orientation and will never be happy with an open relationship, as they need sexual and romantic exclusivity to feel loved, respected, and secure,” says Labriola.

“In many cases, even a monogamously-oriented partner can cope with some form of non-monogamy, such as an occasional one-time “hall pass” to have casual sex with an ex-partner or while out of town for a conference, or having sex with a paid escort or sex worker so there is no emotional involvement. Or going to a sex club or some other type of very clearly ‘boundaried’ sexual experience.

“For someone who is bisexual but is in a heterosexual marriage, often their partner is comfortable with them having sex with a same-sex partner since that is something they cannot provide, but not willing to allow them to have sex with a different-gendered partner.”

4. Be sure to remind your partner they are loved

Labriola says a compromise may involve some sort of trade-off. For example, if you’re asking a partner to accept you having sex with someone else, “There may be some other goal or need that your partner has, which they would like you to agree to, to show that you are willing to do something you aren’t really eager to do since they are agreeing to something that is very difficult for them and which they are not eager to do.

“For instance, with one couple I worked with, the wife insisted on an open relationship as she had started a relationship with a male friend. The husband found it very challenging to accept this, and she said she really needed to explore this new relationship.

“She knew that her husband had always wanted to have more time to pursue a music career, he had always been in a band but because he worked full-time he did not have time to make a go of making the band successful. So she suggested that he take a leave of absence from work for six months and pursue his dream of being able to support himself as a musician.

“He was very touched by this and decided to go for it, he took a leave from work, his band recorded an album and did a tour around the country doing gigs, they did not score a big hit or become famous but were successful enough that he was able to quit his job and make a living as a musician.

“Because he was able to pursue his dreams, he was much more accepting of his wife having a boyfriend, and much better able to manage his jealousy and other negative feelings about it.

“I have seen many similar examples, where the partner who is not eager to have an open relationship asks for something they really want, and because they are able to do something that is very important to them, their personal growth, and their happiness, they are able to much better accept that their partner is asking for their consent to have outside relationships, which is very important to them to pursue.”

If someone doesn’t want to open up their relationship, they may feel agreeing to it will result in their partner moving away from them; mentally, emotionally, or physically. They need to be assured this is not the case.

“If you are the partner who wants to open up the relationship, it will only work if you can continue to make your partner feel loved and secure,” cautions Labriola.

“The best way to do that is to increase the amount of time, attention, affection, and romantic gestures that you give to your partner,” she says, from the mundane stuff like pulling your weight when it comes to housework or paying the bills to more romantic demonstrations.

“Your partner needs to feel that they are experiencing an abundance of love and attention, in order to feel generous enough to accept that you are having sex and possibly love and romance with someone else.

“Loving gestures such as sending loving texts, taking them out for special dates, reassuring them of your love and commitment to them will go a long way to helping them accept this frightening and uncomfortable reality that the person they love is involved sexually with someone else.” ♦