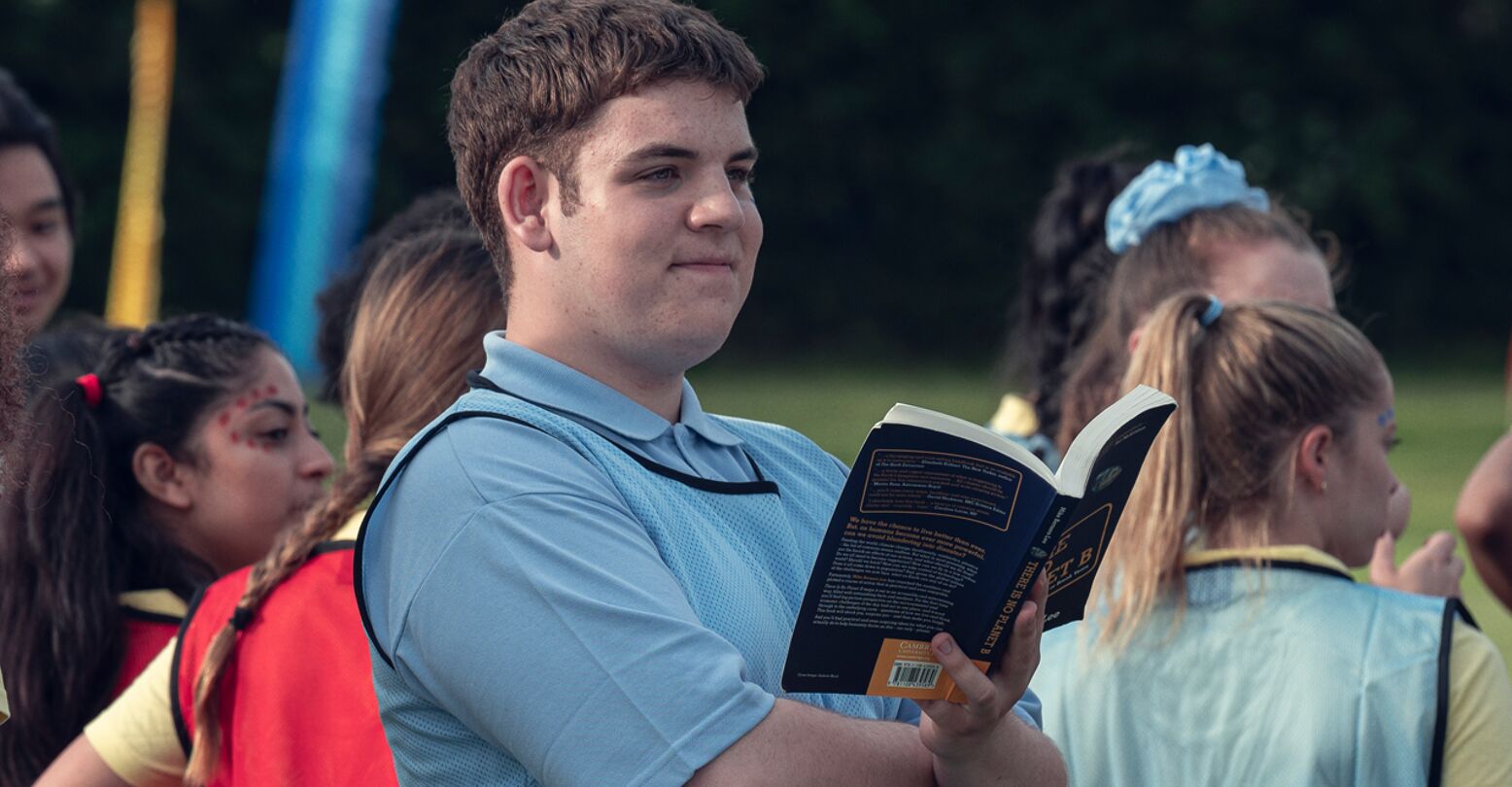 It was no surprise that Netflix’s Heartstopper generated a massive fandom. All the ingredients are there: queer representation, adorable teen romance, a charismatic cast. And when it came to feeding that fandom with behind-the-scenes content, Tobie Donovan came through. The up-and-coming actor, who played Isaac on the show, filmed the entire process from his first day on set to his final moments of shooting, then posted it to YouTube in a nine-part series of vlogs.

INTO sat down with Donovan to talk making behind-the-scenes magic, what it’s like to be a part of the Heartstopper family, and his hopes for Isaac in the show’s next two seasons.

INTO: Hi, Tobie! What initially inspired you to film your behind-the-scenes vlogs?

TOBIE DONOVAN: It was probably just selfish to start with, to be honest. I really wanted to have everything on record, I guess so I felt like it had actually happened. Because I knew that when it had finished, it would be this crazy whirlwind thing that maybe didn’t feel very real. I wanted to make sure I captured as much of it as possible so that when I’m 85 and I’m sat in a chair and I can’t do anything else, I can at least watch these videos and remember what it was like.

What were the logistics of filming on set? Did you have to get permission from Netflix?

I didn’t tell anyone I was doing it! I just went for it. And then when I was coming to post them and I’d edited them all and I was getting ready to go, I was like, “Oh, I should probably run this past Netflix, actually.” I spoke to Netflix, and they were like, “We love this. Let us help you make it even better.”

It was very hodgepodge to start with, so Netflix made that lovely intro for me, and they helped me with the fonts and making it feel like it was part of the Heartstopper family, which was really helpful. And obviously, I had no experience of posting videos on the internet. I didn’t even know how YouTube worked. So yeah, Netflix has just been incredible in helping me make it happen. I couldn’t have done it without them.

Gotcha — ask for forgiveness, not permission.

I also saw that you recently got your Silver Play Button from YouTube for reaching 100,000 subscribers. What was that like?

It was mad! It arrived at my house and I was like, “This is the strangest thing.” Because I watched so many videos when I was growing up, like, Zoella opening hers, or Alfie Deyes — that era of YouTubers was so my childhood. I was posting these videos, and I hadn’t really thought about anyone watching them, to be honest. I just wanted them to be immortalized on the internet. And then when these accolades started coming through, I was like, “Oh my god, this is so weird. I’m like Zoella. What is going on?”

In other vlog news, this arrived today which blew my mind a little bit!! Thank you so much for watching my videos and making me feel like zoella 🤣💜 pic.twitter.com/wxNRGWO9w5

Ugh, that truly was the golden age of YouTubers. Do you have a favorite moment that you captured in the vlogs that otherwise would have been lost to time?

Oh, that’s such a good question. I kind of love it all. I think any moments where it’s us, all of the cast together, just being silly caught on the vlogs is always really special.

There’s a really nice moment in the last video, the most recent one that I posted, where they say, “Oh, that was a wrap on Tobie!” And then Joe Locke is the closest person to me, and I’m like, “Oh, please, I just need a cuddle.” And we have a really nice hug. I’m really glad that that clip exists, that someone filmed that for me. It was really emotional, and it was a really special end to the journey.

Beautiful! And how do you feel about the massive fan response to your vlogs? Your most popular video has almost 700,000 views.

It’s been mad. I kind of can’t really get my head around it. A lot of the time in my head, it’s just numbers, which is, I think, the only way that I can look at it.

I went to see Harry Styles at Wembley Stadium the other day, which seats about 100,000 people. And someone said to me, “Five times this stadium has watched some of your videos,” and I was like, “That is ridiculous. I can’t get my head around that.” I just have to think of it as a number and move on.

But yeah, it’s amazing. I’m so happy people have enjoyed it. I really get it — before I was part of this industry, I would crave any behind-the-scenes content I could get about my favorite shows and movies, so I do really understand the attraction to it. If I wasn’t in Heartstopper, I would have been all over it.

Heartstopper does have a very, very active fandom, as I’m sure you’re well aware. Is there anything you’d like to say to your fans?

It’s such a privilege to have such dedicated fans. We made this show for queer people to enjoy it. And then to see this whole massive community built around loving our show is such an honor. I feel so grateful that people are enjoying it.

Sometimes it’s a bit intense, especially with the vlogs and stuff. I hadn’t been prepared for people zooming in and screenshotting things and going, “Oh my god, I saw that in the background.” Some of you guys should work for the FBI. Like, literal detectives. But yeah, it’s just so rewarding to know that we’re making work that people enjoy.

I also saw that your castmate Kit Connor bought you a brand new camera that you can use behind the scenes of your next two seasons. What’s the story behind that?

Kit Connor is just the loveliest person on the planet. He was really excited about me making all the vlogs and stuff, and I guess he just wanted to help me out, make them a bit better for next time. So he just sent me a message. He was like, “Tobie, what’s your address?” I was like, “What are you doing? Please don’t send a bomb to my house.” I was so scared. I was like, “Kit, please, I don’t trust you. What are you doing?”

This package showed up at my house, and I was like, “What the hell?” It was this massive camera. I was like, “Oh my god, Kit Connor, you are ridiculous. This is so stupid. Why have you done that? Thank you so much.” It was just the loveliest thing ever. And it means that for the next seasons, we can have much better camera quality! So thank you, Kit!

Does that mean you’re going to keep doing vlogs for the upcoming seasons of Heartstopper?

Yeah! I’m gonna do maybe not as many as I’ve done this time around, but there’ll be some iteration of behind-the-scenes content from me for sure.

I’m sure Netflix is grateful for the free labor! I also wanted to talk about your character, Isaac. Alice Oseman, who wrote the comics and the show, has hinted that your character might bring some asexual representation in future seasons. How would you feel about bringing a new facet of queer representation to Heartstopper?

I haven’t read the scripts for the next seasons. I don’t know what’s going to happen at all. At the minute, it’s all kind of speculation, and I have no confirmation, so I don’t want to get anyone’s hopes up. But to my knowledge, there’s literally no asexual representation in any sort of mainstream media. And that’s not okay. This is a massive community of people, and with Heartstopper, we’re doing our best to showcase queer identities as normal, and as teenagers that have other struggles beyond being queer. So, I think it would be really cool to see asexual representation on screen, whether I’m the person to do that or not. I think it’s really long overdue.

this was intended! i’m very glad you got the vibes 👀

You’re in a really unique position on Hearstopper, playing a character that isn’t in the graphic novel series. It must be interesting bringing a brand new element to a story that is already so beloved.

Yeah, exactly. It’s such a privilege to be able to bring something new to this world that already exists. It was quite scary to start with, but now that I’ve seen people connecting with Isaac and enjoying Isaac, going into this new season, I feel a lot more confident. I feel like I can play around with it more. I’m excited to really dive into who Isaac actually is — I think we only really got a taste in the first season.

Yeah, let’s get an Isaac-centered episode in season two! Oh, and I saw you tweeted that you want Trixie and Katya to react to Heartstopper after they mentioned it in an episode of Netflix’s I Like To Watch. Do you have anything to say to them?

Trixie, Katya, if you see this: I love you so much. Please read us for filth. No one will care. Drag the shit out of us. The fans will love it. We’ll all love it.

Trixie and Katya talking about Heartstopper is maybe the greatest thing to ever happen ever.

I can’t believe it hasn’t happened yet, to be honest. What are they waiting for?

I think they’re scared of our fan base getting protective of us all, but we’d love it. I’d love it. Netflix, can you make it happen, please?

Heartstopper is now streaming on Netflix. 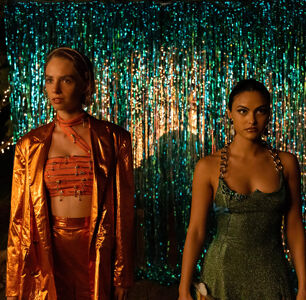