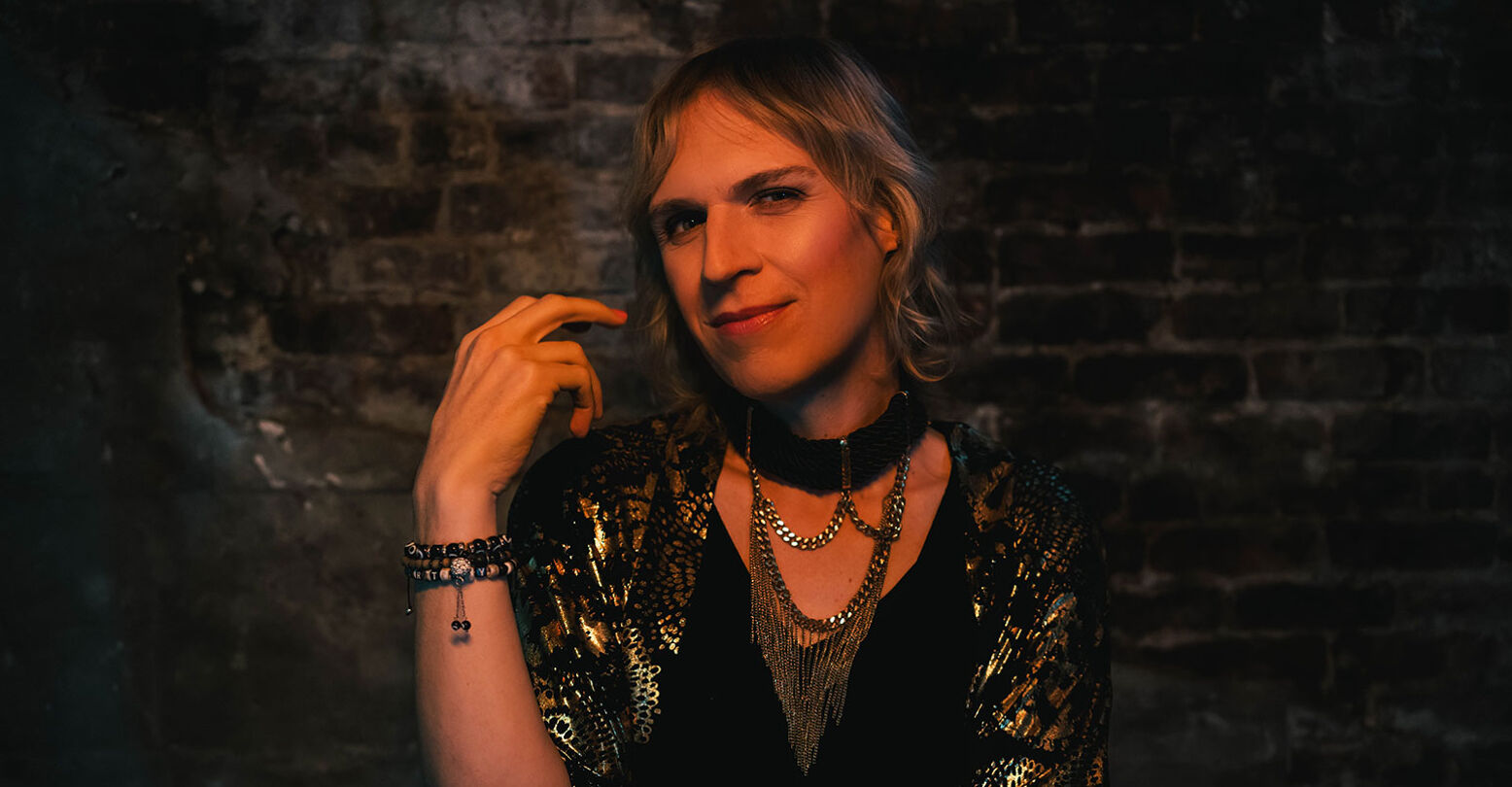 Kristy Worthy Williams, better known by her stage name Mz Worthy, has been a star of the dance music scene as a DJ and producer for nearly 20 years. In December of 2020, she publicly came out as trans, marking a new phase both in her life and in her artistic journey. Now, she’s taken another step toward her most authentic self, changing her stage name from Worthy to Mz Worthy. INTO sat down with Mz Worthy to talk the inspiration behind the rebrand, what it means for her future performances and the importance of being loudly and proudly queer.

INTO: Hi Mz Worthy! That “Mz” really suits you — could you tell me the reason behind that name change?

MZ WORTHY: There’s such a history to Worthy. Even though Worthy’s not a masculine or feminine name in any way, to me it had this connotation from my past of playing under Worthy when I was presenting as male. I felt like I needed to show this shift in myself somehow with my stage name. I was given the suggestion of Mz Worthy by a friend, and I was like, “Oh, yeah, that’s what I need to do.”

INTO: I know you also recently came out with your first single, “Love & Give,” under this new name.

INTO: What’s it like to be making music now with this new freedom?

MZ WORTHY: I think before realizing I was trans, I was only able to feel, like, 25% of how I should have been able to really connect with everything, whether it be music, or my friends, or my emotions — just in general. So since coming out, I feel like there’s this new connection to music, and it’s really been kind of crazy. And I’m just noticing it at different times. Like, I’ll be making a mix, and I’m like, “Oh my gosh, that came out so good, and so much easier than it was before!” I had a really hard time, before, creating. I could feel this tension or angriness before that I feel isn’t there as much anymore.

With the new song, “Love & Give,” it felt like the perfect track to come out at this time, with the rebrand and everything. I just wanted to share that message to the world, that we don’t need to look to the external. We really need to find love for ourselves internally and give that back to ourselves. I think if we all could find that self-love inside, we could then radiate it back out even stronger.

INTO: Beautiful message! I love it. And you’re going on tour soon, right?

INTO: With you going on tour and having been publicly out as trans for a year now, how does it feel to be setting out again, especially since your rebrand?

MZ WORTHY: Oh, since the rebrand, it’s been really awesome. Just the love that I’ve gotten back from the community, it kind of felt like I came out like all over again. I knew everyone was gonna be super excited, but you know, there’s a little bit of fear, like, “Oh, gosh, maybe they’re not gonna like this rebrand.” But, yeah, it’s been great. I’ve gotten a lot of messages from a lot of friends just being like, “I love this rebrand! This is so cool, I love the new logo.”

It’s gonna be a whole new experience, I think, playing again. My last show was a couple of weeks ago under Worthy. And I was realizing, like, so much is about to change after that show, even though I’m playing out as myself and everything. But I was like, “Oh my gosh, this is the last time I’m playing under that name. This is a huge change, and I’m so ready to go forward.” And it’s funny too, because not just the rebranding, but also all my IDs are being updated with my name, too, at the same time. So back on the road, I’m gonna be with my right ID, not getting misgendered at the airport, hopefully!

INTO: Congrats on getting your IDs updated! You haven’t done any shows yet under your new name — what do you expect from your first show out as Mz Worthy?

MZ WORTHY: I think it’s gonna be really amazing. The first show is going to be at the Dirtybird CampINN in Orlando on February 28. I have a really amazing set time, probably one of the best times I’ve had at one of the Dirtybird festivals. I think it’s gonna be just so awesome, because the Dirtybird fans have just been so much fun to play for. Like, when I was at another of the Dirtybird festivals this past October, I was going around, riding my bike, and everybody was just like, “Kristy, what’s up!? Oh my gosh, so good to see you! So proud of you!” I just had the biggest smile on my face the whole weekend. So I can’t imagine going to the CampINN and not feeling even more excited.

INTO: I’m sure you’re gonna kill it. So, you’ve commented on the lack of representation for queer and trans people in the dance music scene. Could you elaborate on that and maybe say how you’d like to see the dance scene evolve in the future?

MZ WORTHY: I would definitely really like to see more trans people on lineups. That was not there when I was coming up in this scene. If I saw it a lot more, then maybe I could have made this connection a long time ago internally. I think that the more trans people we can get on some lineups and see that representation and see them being super out and vocal about their transness, it can be super powerful and really help queer people.

I’ve seen that even with myself coming out. Last year, there was a girl who came up to me at CampINN, and she said that my being out there gave her the courage to actually come out to her conservative family about her being gay. And that is just amazing to hear, that I can have that kind of impact on people. So yeah, the more out and proud that anybody can be with their queerness in this music scene, and in general, gives strength to others. I’m seeing that myself. I want to see that in the future for everybody else.

INTO: Totally. I feel like there’s such a connection between house music and the queer community, it only makes sense that there should be more representation for queer people than there has been.

MZ WORTHY: Definitely! I don’t know, maybe I was just blind to a lot of stuff before. I didn’t have my eyes fully open in a lot of ways. Even with a lot of friends, I’ve been like, “I didn’t even know so-and-so was queer!”

INTO: Visibility is tricky! You’re someone who’s super, super vocal being queer. It’s different than just being out, versus actively sharing and being a super visible queer person. Do you have anything to share about being so open with your transition?

MZ WORTHY: I think that just goes back to me being so repressed for so long that when I came to this realization that, like, “Oh, I need to finally come out to the world and my fans.” I need to be vocal about what I’m going through and really show what transition is, teach people what it means to be trans and be in transition and educate cis straight people. But also be there as a beacon for other trans people.

I had a younger DJ from Austin reach out to me during that time, and was like, “I’m going through it too, and your posts are meaning a lot to me.” And I have had a couple people who are in transition as well reach out to me saying how me just being so vocal has helped them out. So, it pays! That feeling I got has come true: I needed to be visible because it was more than just myself that I had to be visible for.

INTO: To have those people responding to you and showing that you’re helping — I’m sure that feels great. I also know that you are currently fundraising for your facial feminization surgery, or FFS, which is about a year out, right?

INTO: You’ve posted about how much that surgery means to you. Could you elaborate a little bit on why that surgery is so affirming for you and for many other trans people?

MZ WORTHY: For me, it feels like I haven’t been able to really see myself. There’s some trans people who don’t need it — like, their face didn’t get, I don’t know, all the testosterone that other people get and really change their face. And so when some people transition and their face looks so beautiful, for me, it hurts. Because I see the femininity coming out in me, but I also notice these masculine features that are just not going to go away through HRT. So I feel this incongruence when I look in the mirror. It comes and goes. And sometimes it’s really hard to look in the mirror.

I know how much I need this surgery. It’s a really life-changing surgery for trans women who need it. I’m waiting for that day where I just can see myself.

It’s a lot of confidence in yourself, I think. It’s feeling comfortable in your skin. And seeing yourself, like, “Oh, that’s the face I’m supposed to see.” I have one friend who’s gone through it, and she was like, “I remember this face from when I was younger, before I went into puberty.” All these memories came back to her about her childhood, because she could finally see that face again that hadn’t changed.

INTO: Thank you so much for sharing. What other projects do you have coming up?

MZ WORTHY: My next release is on HE.SHE.THEY. out of the U.K. I’m super excited about them — they’re a queer-centered record label. That’s going to be coming out in March or April. And I’m trying to put together a fundraiser for this surgery.

INTO: I’m so excited for you to be entering this new chapter as Mz Worthy! It sounds like it’s going to be an amazing experience on this tour and everything afterwards.

MZ WORTHY: I’m so excited to finally have made this move. It’s been a yearlong process, and it’s finally happening!

“Love & Give” is now streaming on all platforms. You can donate to Mz Worthy’s FFS fund here.♦