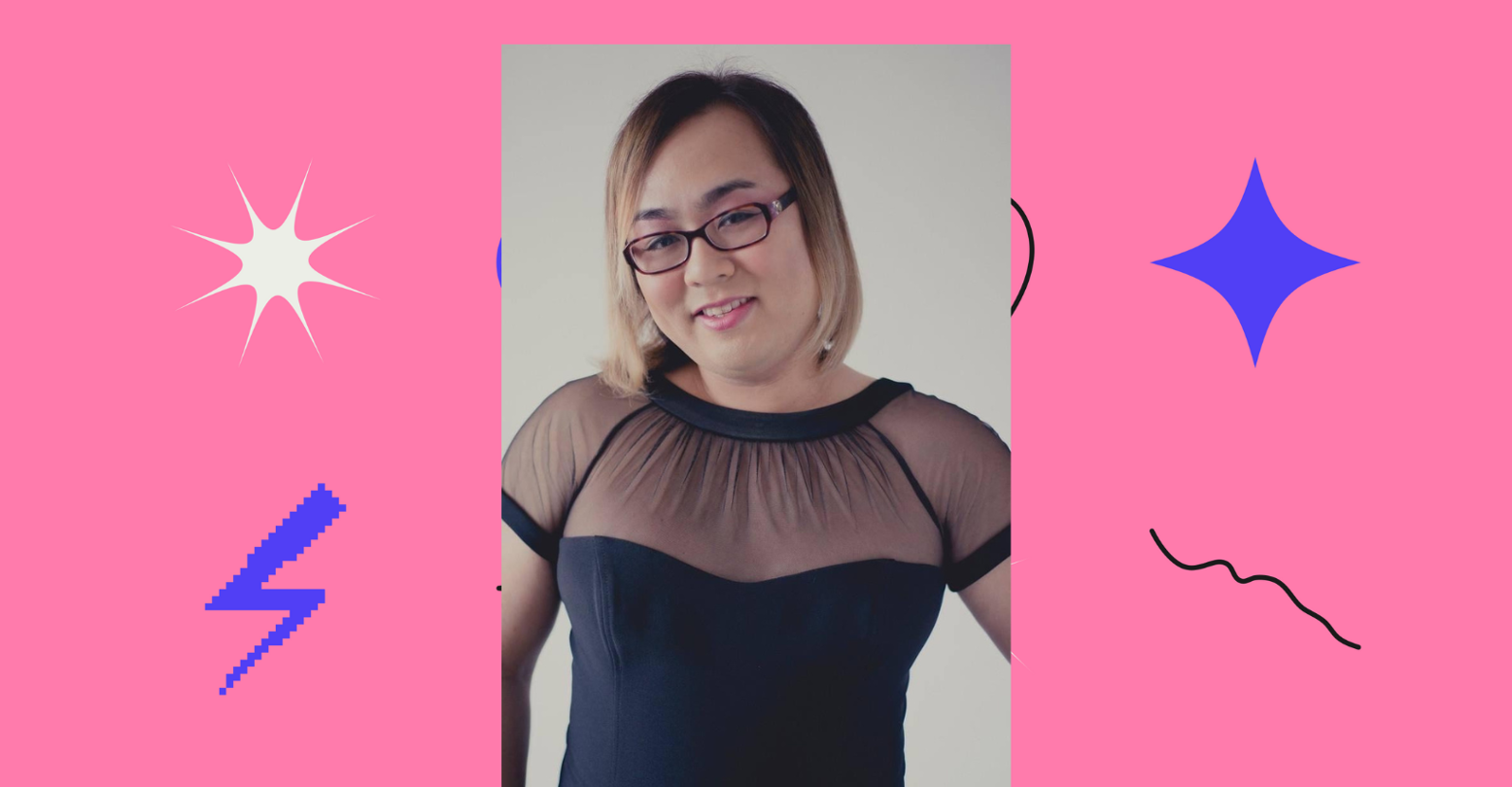 If you ever go toe-to-toe with Robin Tran up on the grand stage: be prepared. The self-described “transgender bully” is fiercely real about her life as a trans lesbian in stand up, roast battles, and online. She pulls no punches, because honestly, why should someone this funny ever have to? From making jokes about painful moments in the coming-out process to reclaiming the “super straight” title to be hilariously trans-inclusive, Tran’s comedy is darkly vindicating for anyone who’s ever wanted to laugh at their own pain.

Named one of Just For Laugh’s New Faces of 2021 and featured in Netflix’s “Are You Still Listening?”, Tran is set to perform at LA’s Elysian Theater as part of the “Netflix is a Joke” festival.

INTO caught up with Tran to talk about the real issues: depression, “The Simpsons,” and fart jokes.

INTO: I’ve been watching some of your stand up stuff and obviously obsessed, hugely obsessed. I’m just, I mean, of course, like I’m very I’m obsessed with like, people, not just trans comics, but like people who are trans and who are just funny because I feel like it’s often like, as you know, in the world, we’re always portrayed as being like, just like sad and pathetic.

ROBIN TRAN: Every now and then I’ll get an interview request from a news network, and it’s always like, after some hate crime, or some like controversy in comedy. And they always want me to pick the side of like, “Why do you think comedy has gone too far?” And I’m like: “why don’t you ever interview me when I’m being funny?” I always herd them down and kind of make fun of them too, because I do want to be seen first and foremost, foremost as a comedian before, you know, an activist or whatever else. Other people can do that, and I respect them. I just don’t feel like that’s like the role that I’m best in.

Your comedy like takes some of the like, most painful parts of transness and makes it hilarious which, like, to me that is activism. But it’s also a different kind of activism that’s equally needed. Like talking to your mom about suicide.

ROBIN: That joke… that was actually the first time I dissociated from my body. Coming out to my mom. I actually kind of left my body and I was like, writing the joke as it was happening, because it was the only way I could get through the moment. It was so intense. And it’s actually from an old joke I wrote a couple of years ago that I could never get to work. I had the blueprint for it: it was about how it’s hard to explain complicated concepts to my parents because we have a language barrier. But the setup took too long and the example wasn’t funny. So I’m like, I get this joke won’t work. But then as I was coming out to my mom, I was like, oh, I should just use this example. And then later that night, I was so messed up from coming out to my mom emotionally that I just went to an open mic, and I did the joke, and it got such an amazing reaction just the first time doing it. And I never changed a word of it ever since then.

It’s something that’s so difficult to talk about, both coming out to parents and suicidal ideation and dissociation and to get through that stuff we kind of have to find it funny on a certain level. Turning dysphoria into like, a way of seeing yourself in the world and thinking: “well, this is pretty ridiculous.”

I feel like there’s like a cultural war going on, and the position that I’m in of different from most people. There are some people who are like “some jokes go too far,” or people who are like “I can say whatever I want,” these kind of extremes. But I feel like I was always into really dark humor. And the heartbreak that I’m feeling is that I didn’t realize a lot of people who are into that are not kidding. That was what was messed up for me was realizing like: “Oh, I’ve been kidding this whole time, I’m just making horrible jokes.” And then I realized a lot of them were not kidding. Then I was like, “Oh, great. Now I’m like associated with people who aren’t joking.” So I feel like it’s more like I go after those guys. It’s like going after your own family almost, like “you guys are ruining this amazing dark humor that I love.” I like opening for Anthony Jeselnik, for instance, because I think he and I share the same philosophies when it comes to jokes, which is that they’re funny as fiction, almost.

It’s funny that people assume comics are just on all the time, too. It’s like…no comics are super depressed.

I’m trying to actually undo that. What I’ve come to realize in the past couple of years of just not being able to be funny—I had this really bad case of Anhedonia for years, just this inability to feel pleasure, or joy. I really lost my mind, for two years. And I wasn’t able to laugh. I wasn’t able to really cry. I wasn’t able to feel anything. So when I overcame the depression, and I was happy for the first time, I realized that I didn’t even get funny until I became happier. So it’s almost the opposite of what I’ve always been taught. And I’m wondering if like this idea that “comedians are depressed” wasn’t just kind of invented by depressed guys that kind of didn’t want to go to therapy and didn’t want to take care of it. They stayed depressed because they thought it made them like better performers. But I feel like now it’s like I’m on stage and I’m just having the time of my life. I even can go darker than I was able to do before. So even the idea of like, “Oh, if I’m happy I can’t do dark comedy anymore,” it’s actually the opposite. Like, since I know I won’t slip into depression, I can talk about these things and have a detachment from it emotionally while structuring it in a way where it can work as a dark joke on stage.

Yeah, once you’re in a better place, it’s easier to just like, look back and have the distance of: “That thing was really horrible. But I also see now how it was kind of funny.”

There’s also this relief that I’m not experiencing it anymore.

#tbt for my new followers 👋 this @RoastBattle of the year vs. @JoeEurell1 will go down as my top 3 favorite things I’ve ever done in comedy ☺️ pic.twitter.com/5tOpH34TpH

Yeah. I feel like there’s this thing with tough periods like that, where you go into a deep depression or have a nervous breakdown. And then when you look back on it it’s like, you can’t actually remember how it feels. You’re just glad to be out.

It’s hard to explain this, but I feel like I have memories of depression. I actually remember how it feels pretty vividly. I don’t have very many PTSD flashbacks anymore because I’ve dealt with them, so I have a memory of it, but I don’t feel it in actuality. That’s kind of when I realized that being depressed wasn’t my fault. But I couldn’t see that until I got out of the depression. Because I always thought like, well, you know, I can talk my way out of depression, right? But I can’t actually do that, because I can’t talk my way into depression either. It’s like a really different physiological response because now, if I say like a lot of sad thoughts or sad things to myself, I don’t get depressed. I get like, a healthy sadness, which is way different.

Right. Because the great thing about it is that you have no control over it, and that’s also a scary thing.

I got lucky. I got medicated, I went to doctors, I did therapy and psychiatry, and it’s the best investment I’ve ever made in myself.

Yes. Just having the help you need and being able to like do those tiny day-to-day things can be radical and huge. And being able to return to your art where you’re saying really dark things about the world.

My partner gave me the best advice and I think about it all the time. She said: “Comedy is not your full-time job. Your full-time job is your mental health. And if you take care of that, you’ll do comedy for the rest of your life.” So I always remember that.

Totally. Because yeah, there’s this stereotype of comedians being depressed and falling into addiction cycles and it’s often valorized and glamorized.

I love it, because those people are like, “If I’m not depressed anymore, will I still be funny?” And I’m like, “you’re not funny now.”

Nowhere to go but up!

I’m not so obsessed with my own depression, and I can talk about so many other things now, you know, I can actually talk about television shows I hate and all this other stuff.

Yes, the important things. I also love your bit about how guys have to be super hyper straight to be into trans girls. “I’m not eating out that man’s pussy. I’m straight.” Like, I died.

Yeah. I like to do like, the problematic guy but underneath it all there’s kind of a progressive point, it’s just a crass way of doing it. A while back I got into Snopes for being the originator of “super straight”, because a lot of the alt-right people tried to claim super straight as in like, “not into trans women.” So I did a joke in 2017 about how if you’re into trans women that means you’re super straight because you don’t care what kind of girl it is. So yeah, so I got excited to be in Snopes.

Oh my god. Yeah, there you go. She’s already changing the culture. I love that, because it’s like, whatever stupid crap that we can’t control that happens, comedy is a way in which we can always take it back.

Yeah, I tend to like to be silly, too. I think there’s a lack of silly silliness in comedy now.

I agree. Nothing will comfort me as much as Blazing Saddles. Sometimes fart jokes are just the way to go.

Yeah, I mean, I’ve been watching the same 60 episodes of “The Simpsons” for like 20 years: season 4 to season 6, when Conan was in charge. They did something I love, which is that they did very smart concepts, but it was like, in a way where people who didn’t get the concept can still laugh. The jokes had to be for everyone. People who get the message, get it, but people who don’t get it can still laugh at like the absurdity of Homer’s acting and funny noises and funny sounds. ♦

Robin Tran’s first comedy special, Don’t Look at Me, is streaming on Hulu, Spotify and iTunes