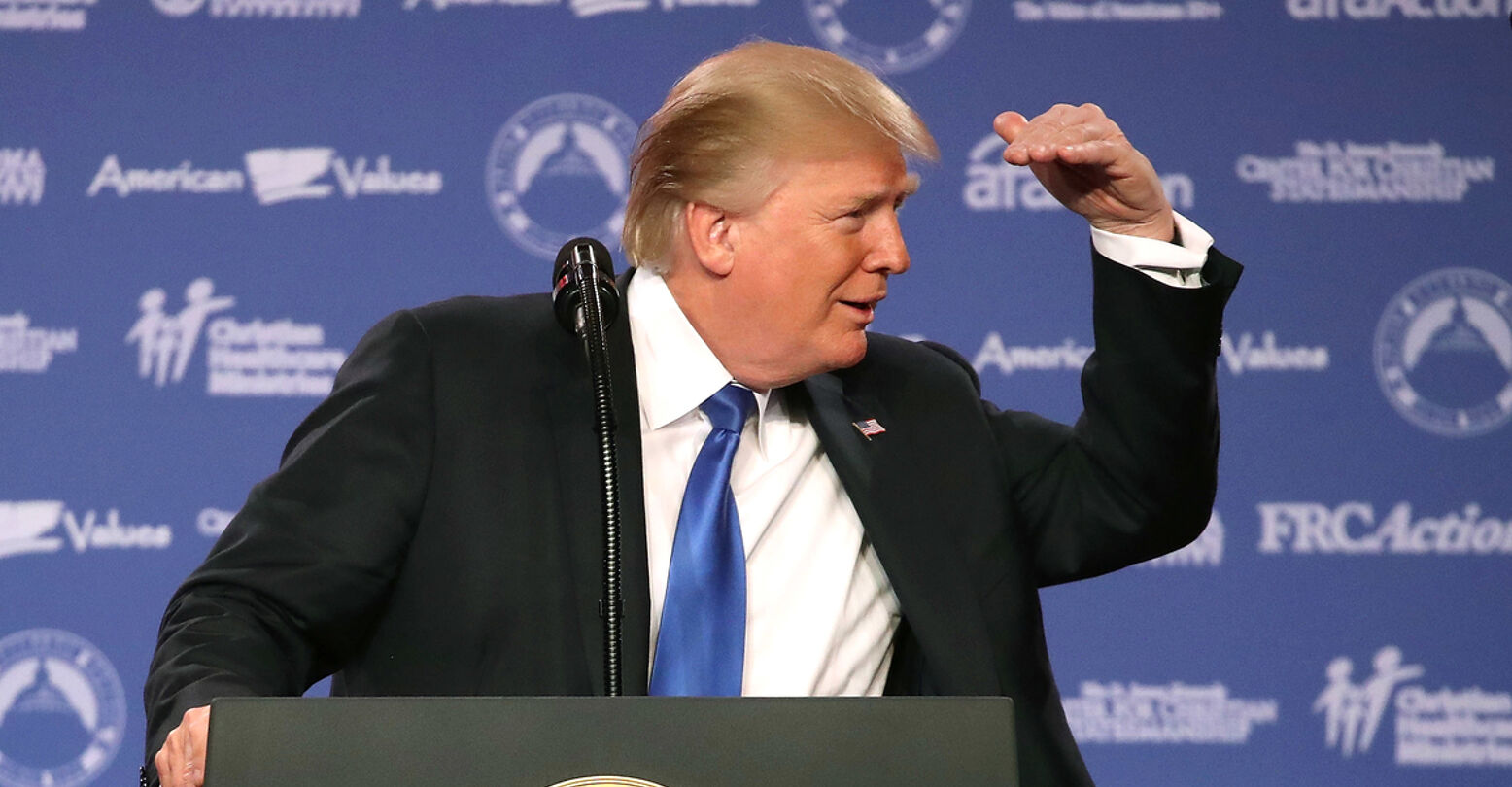 On Friday, Trump became the first sitting president to speak at an anti-LGBTQ summit when he addressed the Values Voter Summit in Washington, D.C.

Do you remember Lady Gaga’s opening monologue on Saturday Night Live, where she reworked her hit “Applause” into a song about spewing out bullshitfor cheap claps? Trump’s speech was basically a reworking of that, except he’s the leader of the free world and the audience is full of real life homophobes.

Here are a few egregious things he said.

1. A speech full of platitudes and unspecific talking points.

“We love our families, we love our neighbors. We love our country. Everyone here today is brought together by the same shared and timeless values. We cherish the sacred dignity of every human life. We believe in strong families and safe communities. We honor the dignity of work. We defend our constitution. We protect religious liberty. We treasure our freedom, we are proud of history. We support the rule of law and the incredible men and women of law enforcement. We celebrate our heroes and we salute every american who wears the uniform. We respect our great American flag. And we stand united behind the customs, beliefs and traditions that define who we are as a nation and as a people.”

Ok, y’all there’s a lot to unpack here. But, in order, here’s everyone and every issue that Trump just attacked: women’s reproductive rights, victims of police brutality, the disabled and those who are without jobs, LGBTQ people, black people and those descended from slaves, victims of police brutality (again!), people who are victims of gun violence, Colin Kaepernick, the NFL, anyone who uses their First Amendment right to protest, Native Americans, black Americans, Latinos and more.

We’re off to a great start!

2. Did he forget his Muslim ban?

“Just last week, based on this executive action, the department of justice issued a new guidance to all federal agencies to ensure that no religious group is ever targeted under my administration.”

Trump says that all religious groups are protected under his administration, but did he forget his de facto Muslim ban, which his friend Rudy Guiliani admitted was a Muslim ban?

3. This misremembering of the Christmas season.

“As we approach the end of the year, we’re getting near that beautiful Christmas season that people don’t talk about anymore. They don’t use the word Christmas because it’s not politically correct They’ll have it painted red, but they don’t say it. Well, guess what. We’re saying Merry Christmas again.”

We’re not sure what anti-capitalist non-United States nation Trump has been living in, but in the United States, Christmas is now everything after November 1st and Black Friday starts on Thanksgiving morning.

4. He attacked Congress and forgot that literally everyone despises his health care legislative efforts.

By “better,” do you mean costing millions of people their health insurance? And if you can’t get your majority Republican Congress to pass a health care bill how is it their fault?

Remember that time his full Cabinet met and praised Trump and talked about the “blessing” of working with him? Blessed be the fruit, y’all.

I’m never one to revel in having to stoop to a Family Guy reference, but the whole thing was a little too Lois running for office and invoking 9/11 for applause?